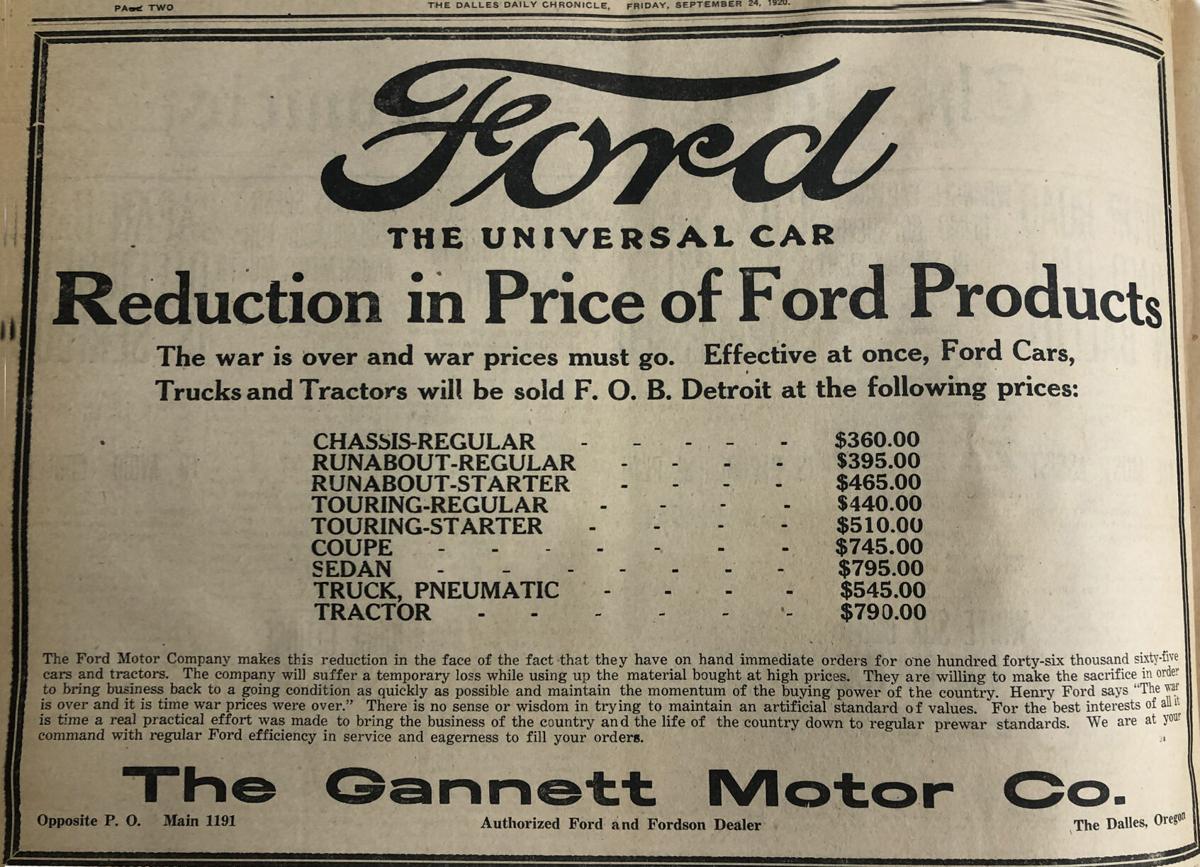 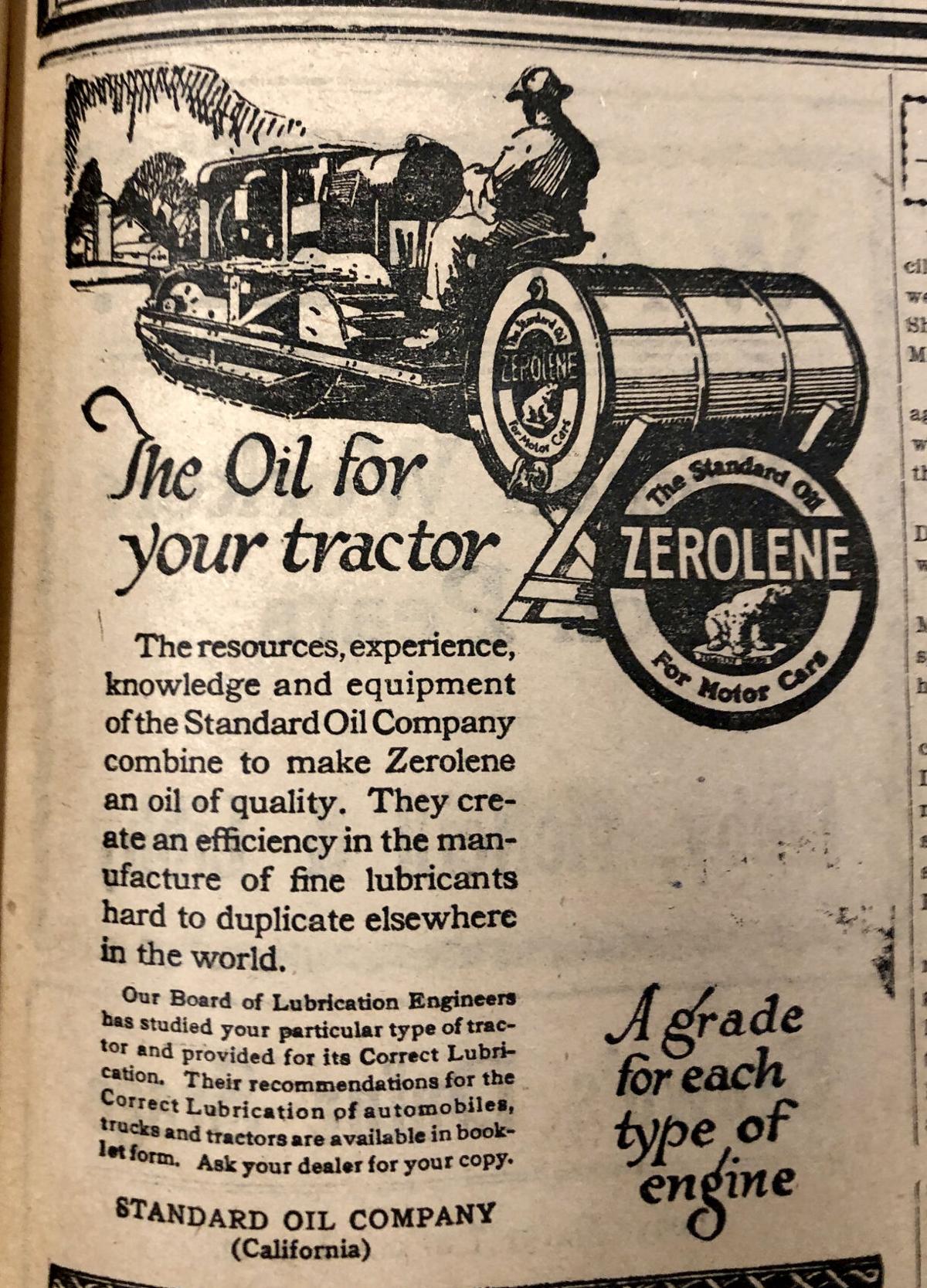 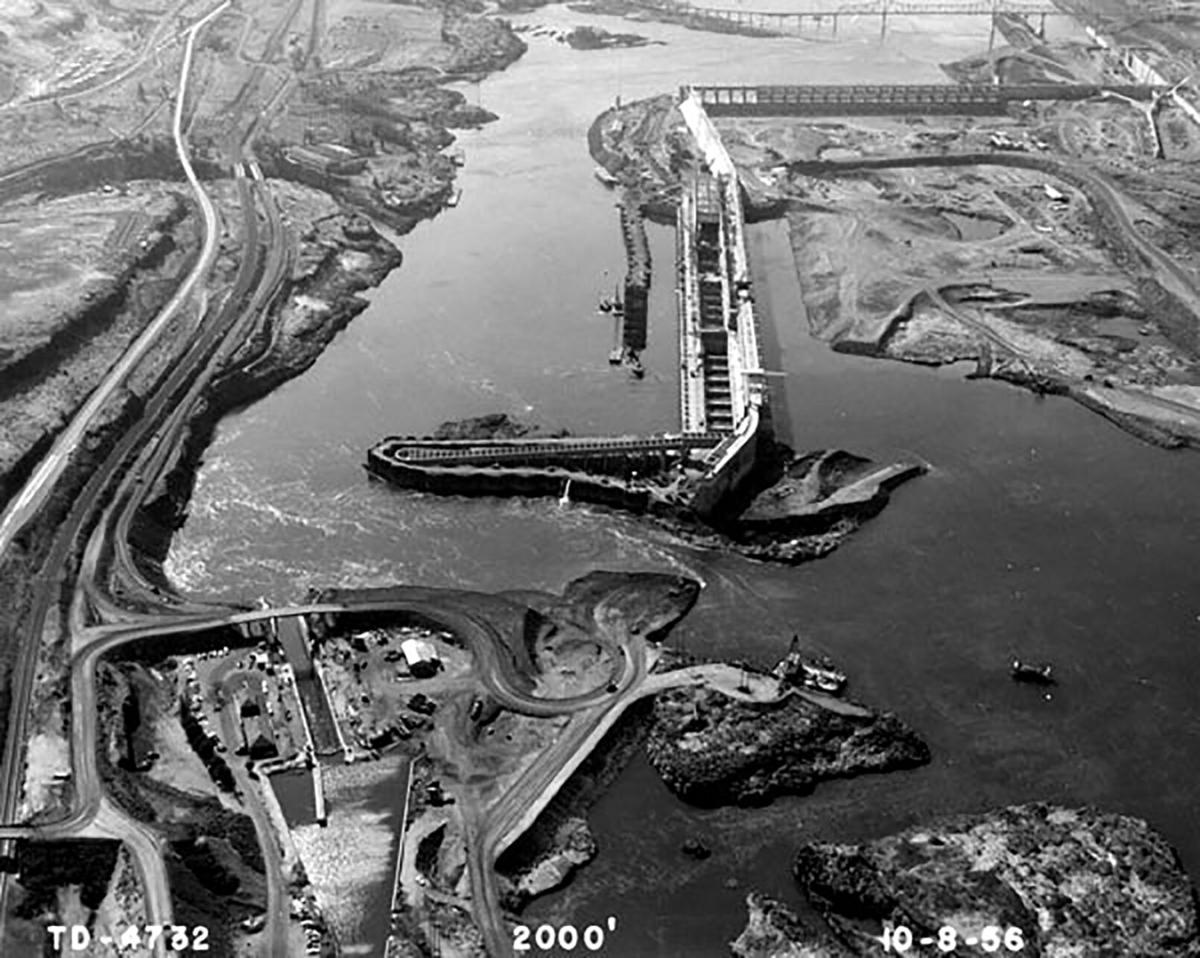 A set of aerial photographs show the progression of The Dalles Dam, which was completed in 1956. The images help bridge the visual gap between a Columbia River flowing free and the Columbia as it is today. Above, the completed dam structure, mostly built on dry land, is broken only by a single channel. 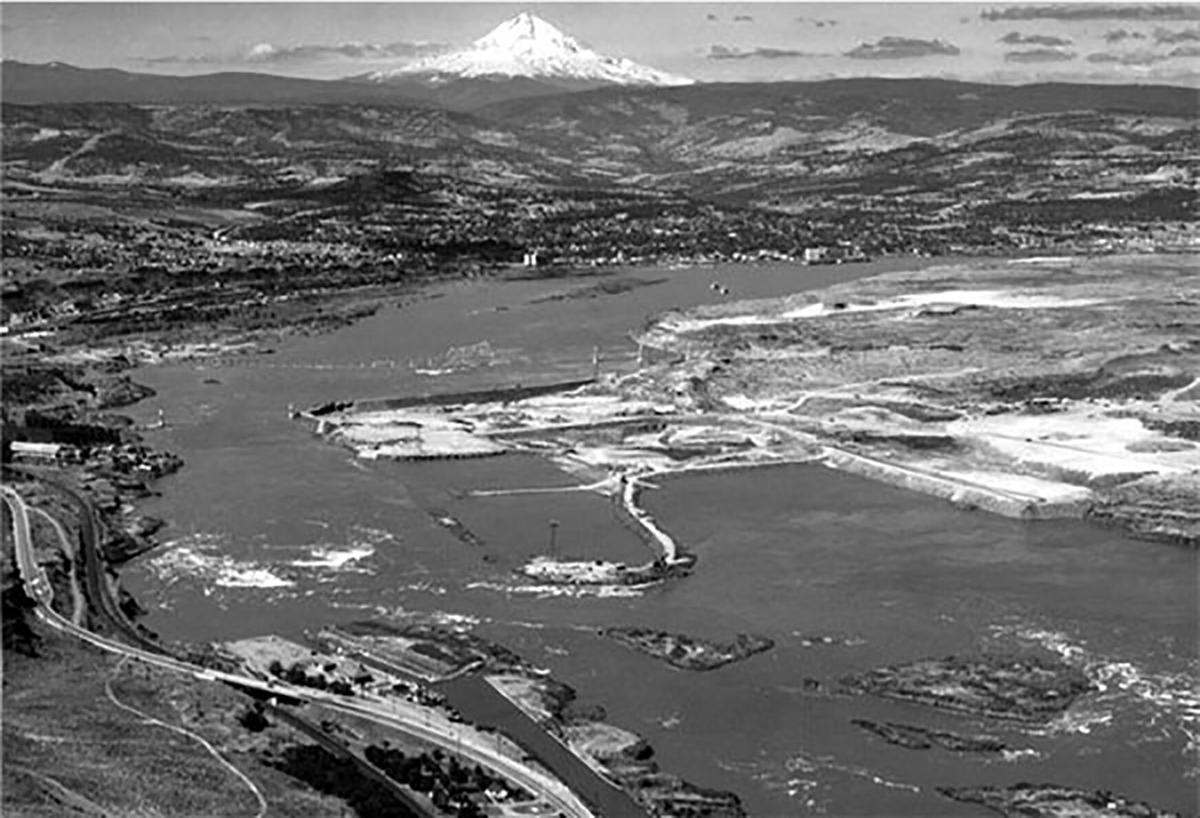 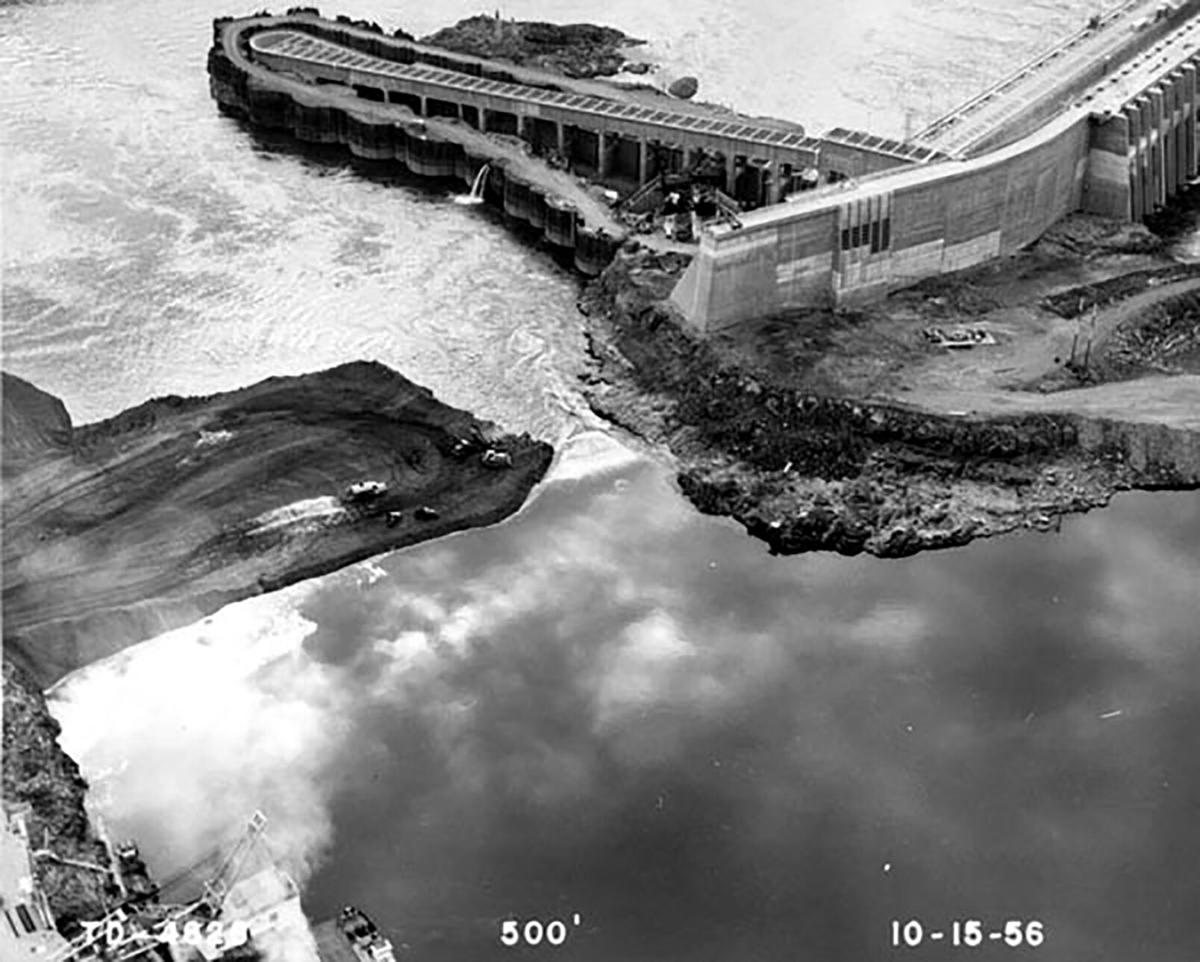 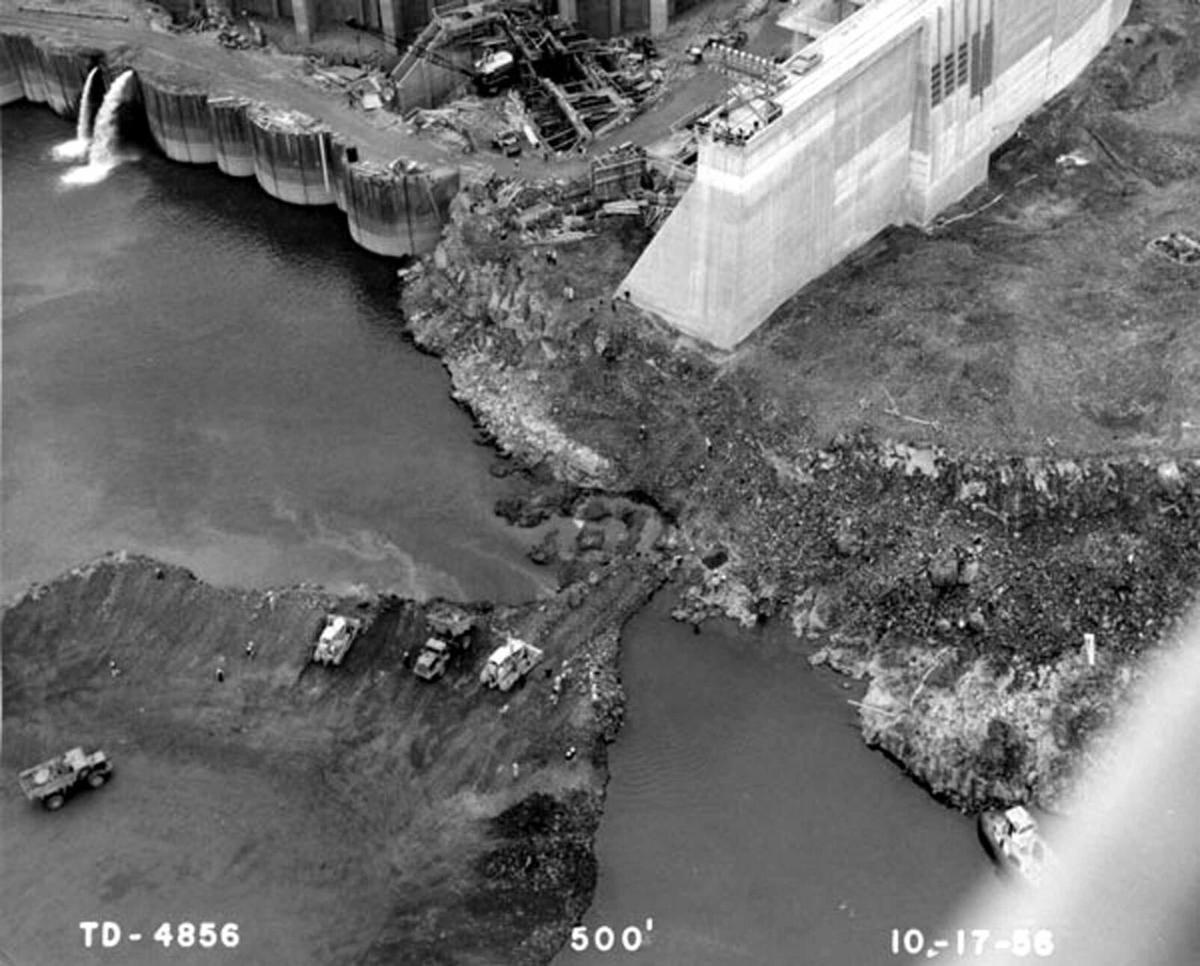 The remaining channel is seen prior to creation of the rock dam, just getting underway in photograph above.

A set of aerial photographs show the progression of The Dalles Dam, which was completed in 1956. The images help bridge the visual gap between a Columbia River flowing free and the Columbia as it is today. Above, the completed dam structure, mostly built on dry land, is broken only by a single channel.

The remaining channel is seen prior to creation of the rock dam, just getting underway in photograph above.

If there was one feature more than another that displayed itself in the exhibits at the County Fair Friday and Saturday, it was the tendency of ranchers here to look more to diversify farming than ever. And the great percentage of the exhibits proved that those ranchers are getting away from the policy of pulling all their eggs in the one basket is proving to be right. — Hood River News

Local dealers do not anticipate any immediate drop in the price of automobiles due to the cut made by Henry Ford on his cars. Several of the local men have Fords on hand and they state that the margin allowed for profit will assist in protecting them against the drastic cut. F.H. Gannoit, local Ford dealer, said he was protected on every car in his shop except two and that the loss on those would not be great. — The Dalles Chronicle

For the first time in many years, it is reliably stated that a group of local men were, early this week, heard audibly praying for an east wind. The reason? Well, large quantities of pears had been dumped into the Columbia River north of the railroad tracks and the prevailing west wind had backed them up to the city mole in such quantities that more than one onlooker had to be restrained from making an effort to walk across the slough on top of the floating fruit. Those who were praying had faith that an east wind would carry the fruit away from the mole to a point at which it would be less conspicuous to either eyes or noses. — Hood River News

A sign of one local business firm’s faith in the future of Hood River is the formal opening Saturday of the Hood River Stationer’s new lower level store to the public by Mr. and Mrs. Forest Bellus, proprietors. Renovation of the basement in the Second and Oak building has been completed to make an attractive floor for the shop’s line of office furniture and equipment, art and engineering supplies, and other items. — Hood River News

City councilmen may have to consider an ordinance to solve a problem confronting the recently completed city sewage plant. Although out of commission the last two weeks because of a broken main, the plant was encountering difficulties with fruit peelings before operations were shut down. Plant Operator Stan VanDerZanden said a large number of peach peelings from local canneries pass into the clarifier where they settle and block the outlet. — The Dalles Chronicle

It will not be a typical school afternoon at White Salmon High School on Thursday, Sept. 17, 1970. The Spokane Chamber Orchestra will arrive, bringing students in this area the magnificence of a live orchestral experience. The 33-piece Spokane Chamber Orchestra and Conductor Donald Thulean will be joined on the program by a special guest group, the Eastmont High School Swing Choir from East Wenatchee. The orchestra and choir will be near the end of a one-week tour of school in Central Washington The series of school performances is made possible by the Washington State Cultural Enrichment Program. The statewide project provides school districts with curriculum-enriching performing arts events few could arrange themselves. — White Salmon Enterprise

Not too many miles from the spot where Dorsey Crapper established his Oak Grove farm, descendants gathered recently to hold a family reunion. There were about 15o persons on hand for the Labor Day weekend get together that included a Saturday evening potluck at Viento and a Sunday picnic at Westside School. Relatives came from Washington, California and Georgia, but most of them reside in the Hood River area. The family founder crossed the prairie by wagon train, finally settling in the Oak Grove area of the Hood River Valley. It was on his land that the Oak Grove School, now a private residence, was constructed. — Hood River News

A new landfill will be allowed to open in Klickitat County next month, but it won’t operate at the regional level it was originally designed for, a Clark County judge ruled Friday. Clark County Superior County Judge Robert Harris ruled the Rabanco Regional Landfill Company dump near Roosevelt can open by Oct. 31 but not as a regional facility. Harris, who served as a visiting judge in the case, nullified Klickitat County’s Solid Waste Management Plan Update which called for a regional landfill. — White Salmon Enterprise

Judson Baptist College officially came to The Dalles at 8 a,.m. today when the first students for the fall term registered. — The Dalles Chronicle

A recommendation to establish minimum stream flows on Fifteenmile Creek drew mixed reactions at a public hearing held in The Dalles by the state Water Police Review Board Monday. — The Dalles Chronicle

(1979) White Salmon will be a stopover point Friday evening for a mock nuclear waste transport caravan en route from Bremerton to Richland. The caravan is part of a region-wide educational campaign now underway in Washington, Oregon, Idaho and Montana, sponsored by the Hanford Conservation Project. Caravans will be proceeding along known waste transport routes in each of the four states for a rendezvous in Richland Saturday. The transport team will include flatbed and pickup trucks dressed up as waste transport rigs, according to spokesman Bob Burnett. He said they will carry 55-gallon drums, like the ones used to carry radioactive wastes, only the caravan drums will contain balloons that will be released periodically along the route. — White Salmon Enterprise

The Hood River Grower Shippers association was the 12th county business chosen this summer to receive a share of $1.3 million in lottery dollars. Last Friday, the Mt. Hood Economic Alliance awarded a $50,000 matching grant for the business for research and product development that would produce and deliver “ready to eat” winter pears to the food service trade. Steve Acquafresca, executive director for the Grower Shipper Association, said the project is still two or three years from completion but it is expected to help the ailing winter pear industry. — Hood River News

It’s not a done deal yet. Still, the Northern Wasco County Park and Recreation board took another step toward creating smoke free parks at Wednesday’s meeting. — The Dalles Chronicle

The Bureau of Indian Affairs plans to send out letters of interest to the mineral extraction community to explore the possibility of aggregate mining on Indian lands in and around the Columbia River Gorge Scenic Area sometime this fall. — The Dalles Chronicle

The town of Glenwood may be affected by the alcohol ban that the Yakama Indian Nation planned to enforce starting Sunday, Sept. 17. Yakama tribal leaders aren’t saying how the alcohol ban will be enforced and who will be expected to comply. However, if tribal officials don’t have answers for state officials soon, the Attorney General’s office said it would file a federal lawsuit against the tribe next week. Gary Larson, a spokesman for the Washington Attorney General’s office, said a letter is being drafted and will be sent to tribal officials this week. Tribal officials and the Attorney General’s office have struggled over the legal issues surrounding the proposed alcohol ban for six months. Yakama Tribal councilman Jack Fiander said Federal law and the Treaty of 1855 show that the ban on alcohol applies throughout the reservation, even on private land owned by non-Indians. The Yakama Indian Nation considers the town of Glenwood as part of its reservation, while state and Klickitat County officials believe they have proof the town is located outside the boundary of the reservation. — White Salmon Enterprise

Crews from Canby Construction were fully engaged in widening 12th Street in the Heights as part of the Pacific Heights development off Pacific Avenue.

For the next four weeks, traffic will be routed in one lane southbound, though 12th Street northbound will remain two lanes.

Developer Dave Nelson said workers have finished the fill needed to add a left turn lane southbound onto Pacific, and are now moving the storm drainage basins to the east side. No work will be done on the west side of 12th. Over the next four weeks, crews will add the base rock and curbing, then cover the lane with asphalt and install a new six-foot sidewalk.

Nelson said construction is started on four homes and four more are set to go. Work will also start soon on an Alzheimer’s care facility and 70-bed assisted living facility. The road work is privately funded under an agreement with the City of Hood River.

Another peril for children who play in abandoned or unused old buildings came to light yesterday with disclosure that youngsters had found and spread poisonous insecticide in a basement near The Dalles.

Mrs. Ed Coles reported that children had broken into an old house across The Dalles-California Highway from The Dalles Livestock Commission yard. She said no one had any idea the house, which has since been reoccupied, contained paris green, an arsenic insecticide.

She said it was another danger, along with dynamite caps, that should be stressed by parents in warning their children to keep away from old buildings.

Senior Living: Sifting through the noise of social media