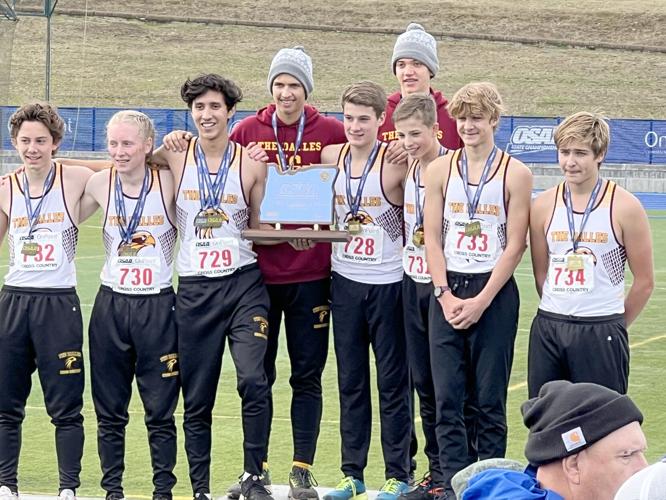 The Dalles boys cross country team with their state championship trophy on Nov. 5. 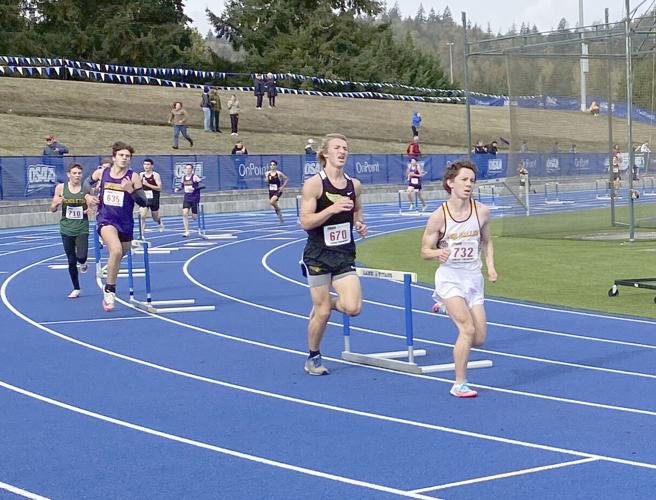 The Dalles boys cross country team with their state championship trophy on Nov. 5.

Whatever the motivation, The Dalles High boys cross country team reached the pinnacle of distance running Saturday by winning a state championship. The Riverhawks, led by two-time state meet runner-up Contreras and Lemann, who was fourth overall, scored 57 team points to edge Philomath (60 points) for the OSAA’s Class 4A title at Lane Community College in Eugene. It was the second cross country title in school history for The Dalles boys, who also won in 1997 (Class 3A).

Coach Jill Pearson’s 2022 team peaked at the right time, winning the Tri-Valley Conference district championship on Oct. 26 to qualify for state. The Riverhawks kept that momentum going with their gutsy performance over a wet Lane 5,000-meter course on a mostly cloudy, sometimes drizzly day.

The Riverhawks and Philomath entered the meet as team favorites, with Eugene’s Marist – and its tight pack of runners – as the wild card. Leading up to the meet, The Dalles’ coaches had told their runners not to pay attention to pre-meet predictions and focus instead on their performances.

Runner-up Philomath had four finishers between The Dalles’ second (Lemann) and third (Vincent Ziegenhagen) runners. But Egan Ziegenhagen finished right behind his twin brother and No. 5 runner, senior McCavic, was close behind them. Tyson Long and Caleb Caldwell completed the state champion lineup for the Riverhawks. Marist, which led the race after the first mile, finished fourth behind Crook County.

McCavic wore arguably the biggest smile after the race. The senior recorded a 31-second lifetime best on the biggest stage of his running career. More importantly, as the Riverhawks’ No. 5 runner (the top five are figured in the team score), McCavic closed the gap between himself and his faster teammates. That proved key in the final three-point margin over Philomath.

“I’ve been having some issues because I haven’t stopped running since last year – since track,” he said. “But I just haven’t been seeing the times I’ve wanted to see. But I just laid it all out today.

“I’m so happy with how the team did.”

McCavic said he was nervous the entire 24 hours leading up to the meet, including the charter bus ride from the Gorge to Eugene on Friday evening. “I’ve been nervous since yesterday. I started calming down today,” he said after the race. “The first mile in I saw my time and I knew it was going to be a good race. The second mile I stayed consistent and then the third I just brought it home on the track.”

The track – and the race’s final 300 meters - is where Vincent Ziegenhagen made his final move, to overtake brother, Egan. But the sophomore did his heavy lifting midway through the race when he worked his way from 39th place after the mile, to 35th after two miles to finally his 19th place finish.

Egan had held the advantage over his brother throughout the Riverhawk season; he had won each of the eight head-to-head matchups prior to state – most of them by comfortable margins. At Lane, Vincent was timed in 17:41.7 to Egan’s 17:41.9. There likely will be some good-hearted banter between the two in years ahead, hopefully ending with a fist bump of their championship rings.

Assistant Coach Mandi Williams said: “All the boys ran phenomenal, but clearly those two – Kayden and Vincent - ran out of their minds.”

Each runner registered a personal best, as did sophomore Caldwell.

Williams said those runners followed the lead – on and off the course - set by Contreras and Lemann. The latter runner’s fourth-place state finish followed his runner-up finish during The Dalles’ district championship performance Oct. 26 in the Tri-Valley meet. Lemann was 18th in the Class 5A state meet in 2021 and fourth in the Intermountain Conference district meet a year ago.

“I was just trying to stay comfortable and keep enough in the tank for the last 400, but push up as far as far I could,” he said.

Contreras, third in the 5A meet a year ago, added a state team championship to an impressive running resume. He ran alone in second place for most of the race, after Marshfield’s Alexander Garcia-Silver broke away early and successfully defended his individual title in 15:22.

Contreras was a model of consistency this season, winning six the teams 11 races. He had 17 meet wins in his high school cross country career, including two district championships and two runner-up finishes.

“We were expecting some harsh rains today, but it’s a good thing that didn’t happen,” Contreras said on the state meet conditions. Of the team title: “That was really the goal coming in here - to win as a team. That was most important to us.”

The Dalles’ girls team qualified as a wild card team, something that wasn’t confirmed until three days after the Riverhawks had finished third at district. “I was very excited. I wanted my team to be here with me,” Casady said. “It’s a lot more fun to have the team; you just get to hang out and have fun with them. I like that better.”

The sophomore was one of three Riverhawk runners to set a lifetime best at the state meet (also Mora Jaimes and Notbohm). “I was predicted 13th, so I was just going to run it as the last race of the season,” Casady said. “I decided to not just care about placing or times and just run it.”

She was with a tight group of four runners in the final 200 meters on Lane Community College’s distinctive blue track. “I wanted to beat ‘em,” she said as her competitive nature kicked in. “She started passing me and I was kind of … half of me just wanted to let her beat me. But I picked it up. I knew she was pretty tired.”

Casady finished first among the group of four, edging Isabela Coffman of Klamath Union by a lean at the finish; each was timed in 20:17.6.

La Grande, with the second through fourth finishers, won the 4A girls team title, 62-84, over runner-up Philomath. Kyla Potratz of Phoenix won the individual crown in 18:47.

NOTE: The Dalles won an OSAA state championship in 2004, when the Riverhawk girls won their second of back-to-back 3A track and field titles. The Dalles also won the 2015 OSAA dance/drill (small team) state title and the 2008 OSAA cheerleading 5A (small schools) state crown.

join your friends and enjoy the sounds of the Big Band era. Dec. 2 7pm