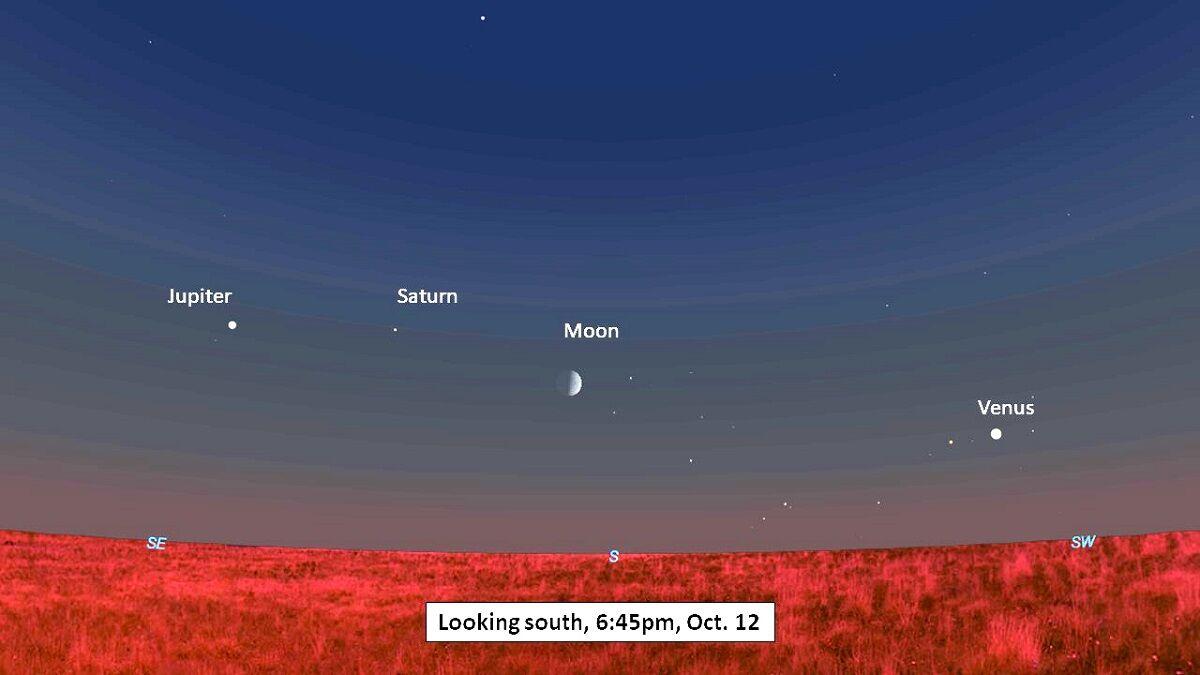 October, the month of the Hunter’s Moon, Halloween, the first full month of Autumn, and great stellar views when skies are clear.

The solar system giants Jupiter and Saturn still grace our southern skies, and are joined in the southwest by even brighter Venus. Step outside and give the skies a look!

The solar system’s brightest planets shine in the southern sky this month, well-placed for observing after sunset. On Oct. 12, the first-quarter Moon will join them in a very nice alignment (see the picture at right). A few days earlier, on the 9th, you will find the thin crescent Moon just to the left of Venus.

By the 14th, the waxing gibbous Moon will be below Saturn and Jupiter. Compare the location and phase of the Moon on different nights, if skies are clear. It provides a good example of how the Moon’s position and phase change in our sky, as it orbits the Earth. October’s new Moon will be on Oct. 6, and the full “Hunter’s” Moon on the 20th.

If you are an early riser and have a good view to the east, look for Mercury near the eastern horizon, late in the month. Mercury is quite bright, but never strays very far from the Sun, so you have to look for it right before sunrise, or at other times of the year, just after sunset.

With October, we continue to bid adieu to the constellations of summer, and greet those of fall and winter. Sagittarius, with the Milky Way’s center in the background, is sinking into the southwest during the month. Cygnus, the swan, and Lyra, with the bright star Vega, still are high in the southwest. In the east, constellations Pegasus and Andromeda are now well above the horizon. A bright beacon in the northeast is Capella, the brightest star in the constellation Auriga. By mid-month, Auriga will be entirely above the eastern horizon.

To Auriga’s right, look for the bright star cluster Pleiades, the seven sisters. In the northern sky, you’ll find that Ursa Major and the Big Dipper are very low in the north, directly below Ursa Minor and the Little Dipper.

Make sure the kids have flashlight for Halloween, because the Moon will not be in the evening sky to help light the way. If skies are clear, their “treat” can be the bright planets in the southern sky.

Senior News: Some medical symptoms you should not ignore