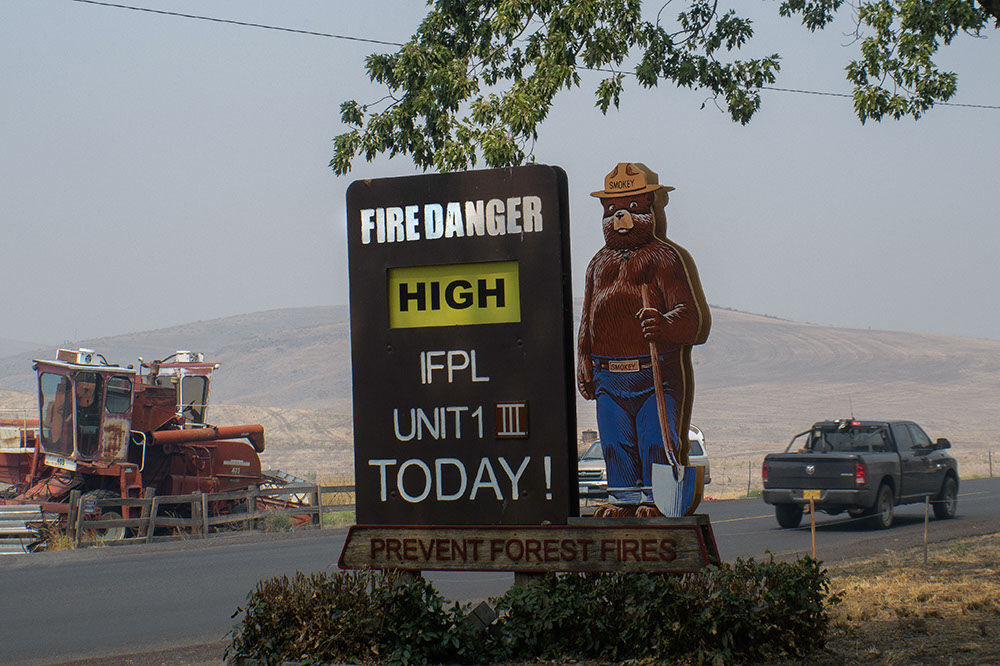 Heavy smoke from the White River fire obscures the hills behind this fire danger sign in front of the Barlow Ranger District office in Dufur in August 2020.  Below, a swath of red on a public information map posted at Tygh Valley Market marks the growing boundaries of the fire. 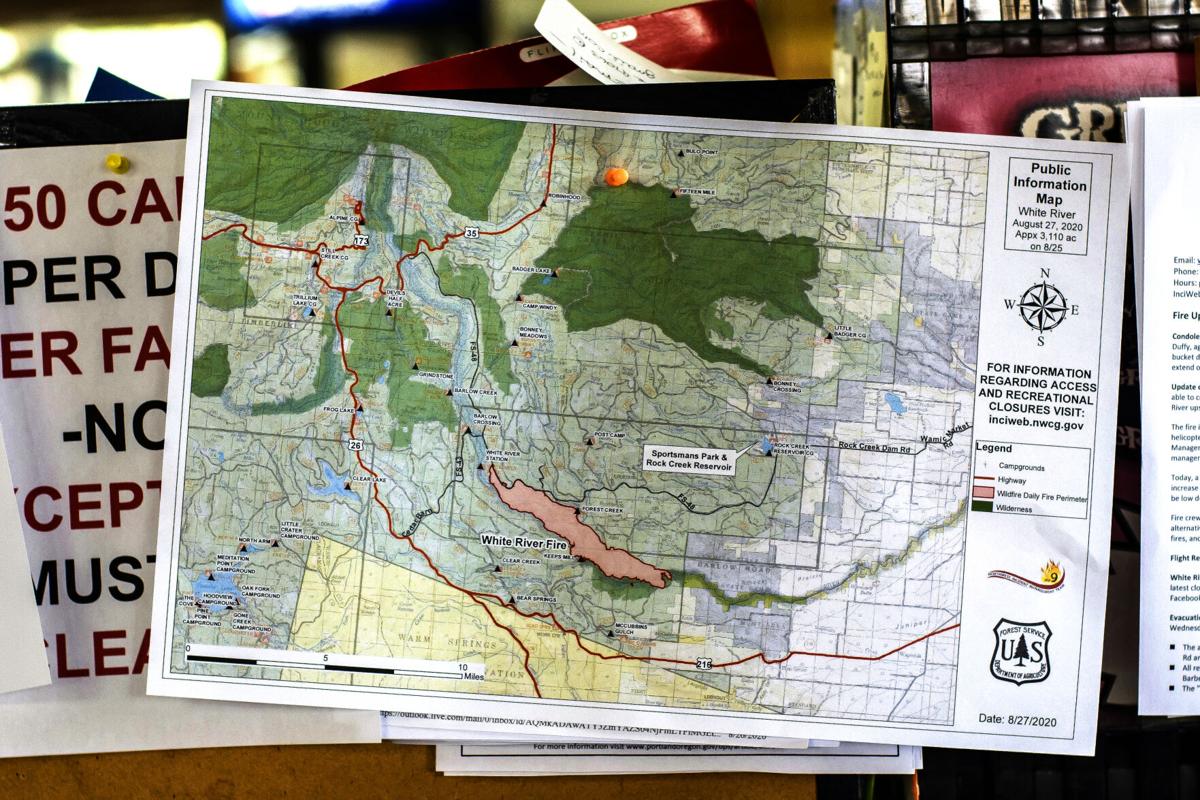 A public information map showing the location of the White River Fire in the Mount Hood National Forest southwest of Wamic hangs near the front door of Tygh Valley Market. 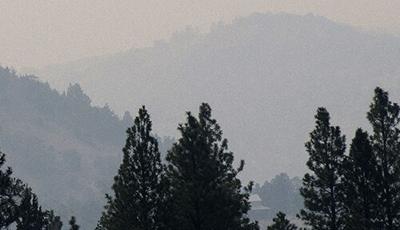 Heavy smoke from the White River fire obscures the hills behind this fire danger sign in front of the Barlow Ranger District office in Dufur in August 2020.  Below, a swath of red on a public information map posted at Tygh Valley Market marks the growing boundaries of the fire.

A public information map showing the location of the White River Fire in the Mount Hood National Forest southwest of Wamic hangs near the front door of Tygh Valley Market.

A presentation video is available online.

Timber burned in the White River fire last summer has been successfully salvaged for lumber due in large part to the work of the Wasco County Forest Collaborative, an advisory work group focused on building relationships and trust among a mixed group of forest users and land owners working with the Barlow Ranger District of Mt. Hood National Forest.

The White River area was ignited Aug. 17, 2020, by a lightning strike and subsequently burned 17,383 acres. The salvage project involved 250 acres of burned timber and involved a number of collaborative agreements.

“We are one of only five collaboratives, out of over 30 in Oregon, that have been able to agree on salvage, its been historically a very controversial topic, and we were able to thread the needle and reach agreement,” Andrew Spaeth, facilitator for the collaborative, told the Wasco County Board of Commissioners in May. “I’m really proud of the work we have been able to do there. It’s been a really strong and collaborative effort, with over 250 areas of salvage agreed to, representing the least controversial areas. It’s an exciting opportunity for the collaborative.”

The collaborative has been building its strength, and trust, with several major projects undertaken since it formed in 2015 as an advisory body to the Barlow Ranger District. Members represent a cross section of forest users — loggers, tribes, ranchers, environmentalists and recreational users are represented. It makes decisions based on consensus vote of appointed steering committee members, in partnership with Wasco County. Currently, Commissioner Steve Kramer works directly with the commission.

“Where we are finding strong agreement is in science based management and restoration that integrates social values and has the support of a the public. We have had no litigation on projects so far,” Spaeth said.

The goal in creating the collaborative was to work together to address problems created by 100 years of fire suppression in the forest, and address the challenges of a changing climate “by working together, building relationships and trust between former adversaries,” Spaeth explained.

The success of the White River salvage project was built on the framework of trust and common goals worked out and tested with three successful projects in the district designed to create a healthier forest and reduce the risk of catastrophic wildfire, Spaeth said. The Rocky Restoration Project and the South Pen and Pollywog Insect and Disease Projects, accomplished the treatment of more than 14,000 acres of district land in Wasco County. The projects emphasized science-based and socially supported projects.

“Wasco County has a lot of dense forest conditions, where fire suppression, past management practices and climate change are all really going to wreak havoc, where a wind-driven fire would result in pretty high mortality,” Spaeth said.

Projects begin with mechanical “mastication” of brush, which literally chews down the undergrowth. “It clears out the forest a bit, and increases habitat and forage for wildlife,” Spaeth explained. “It comes back quickly, and there is a lot of wildlife use.”

In sensitive areas, like irrigation ditches, crews clear some of the brush by hand. “It has a lighter touch,” Spaeth explained.

After that, crews hand thin the trees. Trees are dropped on site, then machines are used to remove them.

Although there is some discussion of using slash and trees as “biochar,” which could utilize slash from thinning to create a fertilizer, current practices focus on firewood opportunities. “A lot of areas within the projects, there is opportunity for firewood,” Spaeth noted. He said one project, where the thinning left a lot of downed trees, those trees were left for firewood. “That was picked clean this last year,” he said. “These projects will create more opportunity for firewood and fuel wood, all these projects will provide that. So will the White River fire project, we can’t use all the trees (for lumber). Some will come down as a firewood opportunity as well.”

Firewood cutting in the National Forest is regulated through a fee/permit system.

With fewer trees, and the reduction in debris and undergrowth, “this is really setting the site up to be more resilient to drought, disease and wildfire,” Spaeth said. “A fire now will have a beneficial impact, and will make fire suppression easier when needed.”

Because the work above is expensive, controlled burns are seen as the best way to manage the project areas going forward. “We are trying to address forest health, understand the opportunities and barriers to using fire as a tool. Over time we want to monitor effectiveness, where will we be three or five years out in terms of meeting the goals of the projects.”

The collaborative, which advises the Barlow Ranger District, has the full support of District Ranger Kameron Sam. “I take shared stewardship really to heart. I want to find the best approaches to forest health, managing water and fire and providing recreation for everyone. Shared stewardship is really a big part of that.”

A lot of the ideas underway to better manage National Forest lands have come from the collaborative, he said. “Multiple agency coordination, good neighbor authority, letting others do work on the national forest, paying the state for hand thinning, prescribed fire, that’s all new, and is working very well.”

The forest, he explained, knows no boundaries between federal, state, county or private management. “The collaborative is a big part of helping us bridge the gaps between agencies and landowners,” Sam said.

The South Pen project, west of Dufur, was one of the first done in that wild/urban interface area under a shared stewardship model, and following its success the district was “able to show we are a good investment, and are improving the forest health,” he said. As a result, the district has received Joint Chiefs Award funds for these and future projects. “The great work we already have done, and the stewardship collaborations we have already set up, are making us a good investment for the funds we receive. We don’t have enough resources, but we are moving closer to that.

“The things we have done so far has been really, really great. I look forward to building on it. The work we are doing here is really positive, and we will get the resources we need over time to do the work on the ground.”

Wasco County Commissioner Kathy Schwartz said she was impressed by the work of the collaborative. “Building relationships between traditionally adversarial groups, that is just great. And with no litigation, that is completely amazing.”

Commissioner Scott Hege agreed, and said, “I’m really happy we are going to be able to see harvest some of the burned timber from the White River fire, that is really exciting to see.”

Sam noted investment in the forest will need to continue over the long term. “We will need prescribed fire every five years in some areas, just to keep that brush down,” he explained. “If the brush is to high, a wildfire will get too hot and firefighters can’t go in. It gets too hot to fight.” The goal in regards to fire, he said, is to have buffers and defensible space throughout the forest.

Social acceptance plays a big role, Sam added, and the collaborative is playing an important role in that. “The collaborative group is where we can talk it out, talk about the issues. We can understand where we have buy in and where we don’t. That has an impact on what we can do, and we can plan projects according to that.”