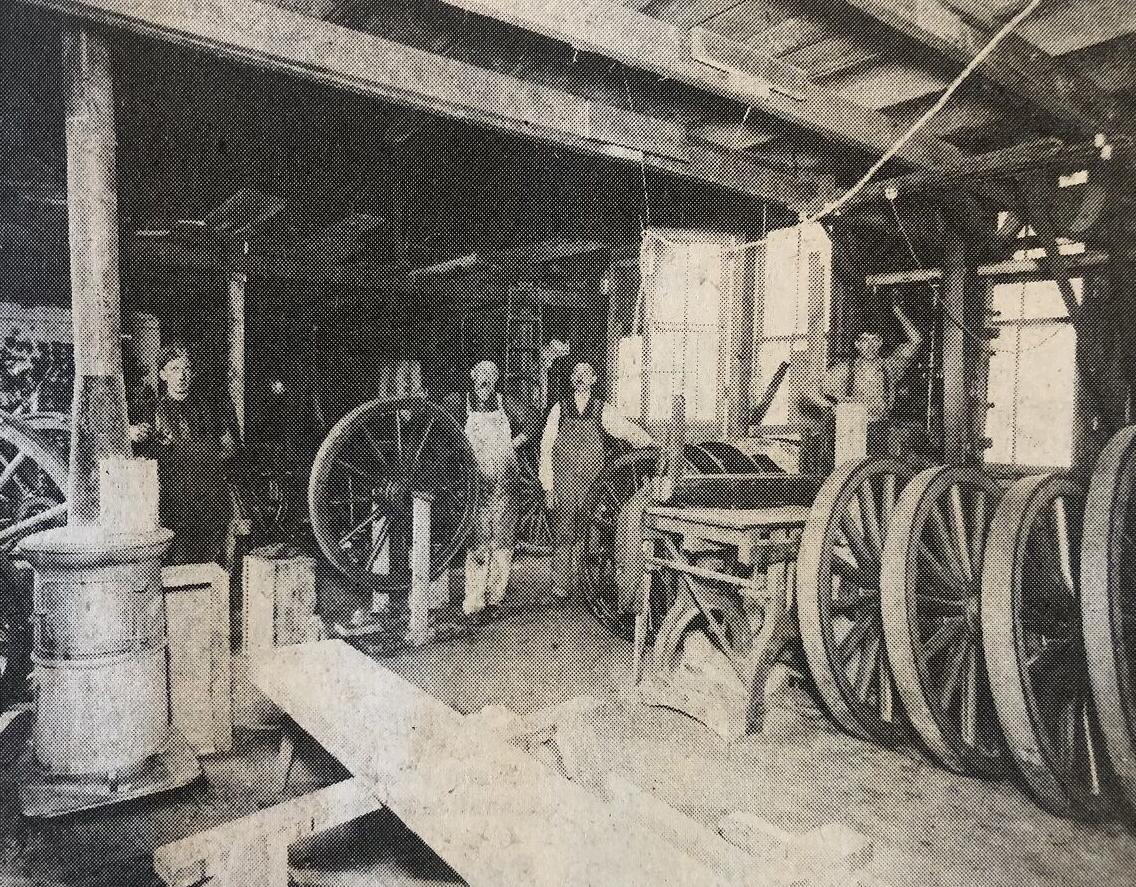 Wheels For The Wagons — Picture shows shop specializing in wagon making. Owner of the picture, Mrs. Helen Schunke, thinks it was either Gunnings or Mat Scharens shop. Picture is undated. 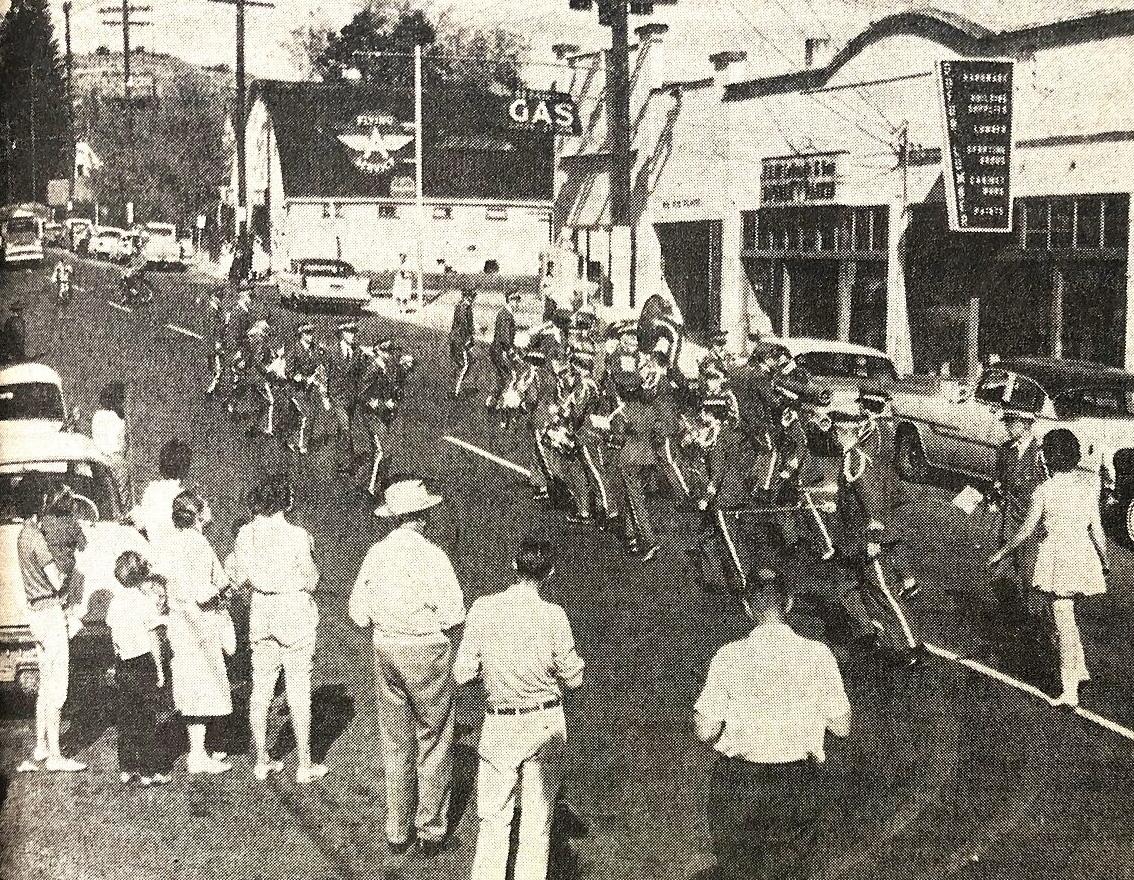 Dufur Parade — Dufur High School band, shown going through one of its routines, led the annual Homecoming parade Saturday. Townspeople and others lined the street to watch. 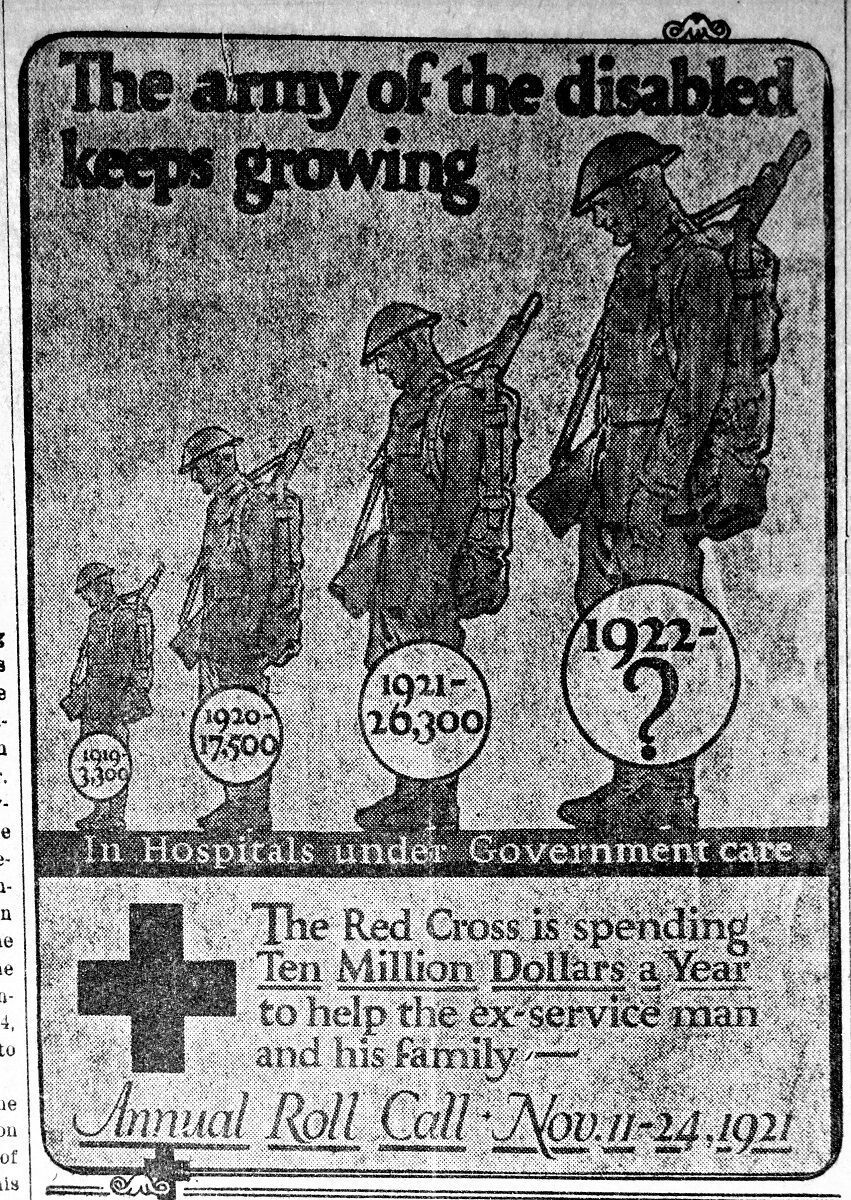 “Disarmament and World Peace” will be the subject discussed by Mr. Richard Montague before the Sunday Evening Club on Sunday night at Riverside Church. The fact that this subject is uppermost at this time in the minds of all thinking people and that Mr. Montague, who is a leading lawyer in Portland, is peculiarly well qualified to discuss it, assures a very large and very interesting meeting Sunday night. — Hood River News

Suggestion that the water commission investigate some of the dead ends of mains to see whether or not they are responsible for the varying results received in anlyses of city water samples was made in a communication received recently from Professor E.F. Pernot, bacteriologist of Portland, in connection with his report on additional samples sent him for examination. Of the eight samples submitted by the water board, two were reported as showing positive traces of colon bacilli, regarded as the dangerous element in the water. One of these was from the city reservoir. — The Dalles Daily Chronicle

As predicted in last week’s News, the federal aluminum plant is to go to Troutdale, this decision having been finally announced in a telegram from Sen. Charles L. McNary to the News last Sunday morning. The decision, disappointing as it was to the residents of Cascade Locks and of Hood River County generally, did not come as a surprise to the few who were informed on the background of the controversy over sites and of the various influences which had been at work for several weeks prior to the release of the final decision. — Hood River News

WASHINGTON — The supreme court today granted a review of Washington state litigation intended to test the right of Indians to engage in commercial fishing outside their reservations without obtaining a state license. Prosecution against “large numbers” of Indians is being withheld pending the high court decision, the federal government said. — The Dalles Daily Chronicle

Residents in the cities of Hood River an Cascade Locks will absorb the biggest tax levy increases this year, while levies in all districts are up at an average of less than one mil for 1961-62, says County Assessor Ken Kirby. Total levy, countrywide, will be $1,562,636.16. Last year, the figure was $1,487,665.13. Kirby notes that the increased figure will result in millage hikes in all taxing districts. — Hood River News

District 12 school board moved Thursday night to confine its educational responsibilities to those pupils living within the district. By a vote of 3 to 2, following extended discussion, the board approved a resolution to cease accepting tuition pupils from nearby school districts beginning with the 1963-64 school year. — The Dalles Daily Chronicle

Many local mill workers were given a chance for some extended unpaid deer hunting this week as Hanel Lumber Co. and one of four department at Champion International’s Dee Hardboard Plant shut down operations. Both companies emphasized that the closures were for this week only. While the businesses are dependent on incoming orders, which are admittedly slow, they said they anticipate no further shutdowns at this time. — Hood River News

Just south of the community of Pitt, atop a high steep bluff overlooking Klickitat Canyon, the newest species of bird life flocked together Saturday for a fly-in. They’re the hang glider pilots and the Pitt Open, the Northwest’s largest hang-gliding meet, attracted some 25 pilots from all over the state for the two-day event. Pilots competed in two classification groups, duration flights and “spot-landing” or target flights. Trophys were awarded to the top three places in each classification group, with a trophy also going to the best all-around pilot. This year the best all-around pilot trophy went to Dan Armstrong, Tri-Cities. — White Salmon Enterprise

The fee to connect to The Dalles water and sewer mains will be $400 Jan. 1, instead of the present $250, the city council voted Monday night. The fee supports part of the cost of system development including main lines, water and sewer treatment plants. — The Dalles Daily Chronicle

The City of Hood River has reluctantly agreed that if there is going to be a tribal gambling casino anywhere in the Gorge, it should be built in Cascade Locks. That move followed an earlier neutral stand on its neighbor city’s efforts to site the gaming center on Government Rock, a 37-acre island purchased by the Confederated Tribes of Warm Springs in 1999. — Hood River News

Marshall Hunter, a Goldendale resident and a 1997 graduate of Goldendale High School, is currently serving his 4th year in the Navy aboard the U.S.S. Carl Vinson. The Vinson is one of two U.S. Ships stationed in the Persian Gulf which just launched the attack on Afghanistan. According to news reports, 25 bombers were sent off the Vinson the first night of the invasion. The Vinson is a huge aircraft carrier that carries a full contingent of 5,000 crew members. Marshall is an Airman E-5, 2nd Class Petty Officer, and is in charge of 70 other airmen. Marshall’s main duty is to deploy the fighter jets on the ship. He and his crew bring the jets down from the flight deck on an elevator, which hangs off the outside of the ship. Marshall is in charge of directing their placement on the ship. “He made us a video and I cannot believe how close they stack those jets,” said his mother, Roxie Hunter. — White Salmon Enterprise

Tribal leaders quelled some fears about the aesthetics of the proposed Hood River casino by unveiling design plans in a meeting here last week. However, polarized viewpoints still prevailed during an informal mediation Oct. 3 between the Confederated Tribes of Warm Springs and Hood River government officials. — The Dalles Daily Chronicle

As announced on page 14 of this week’s News, the night of Oct. 31 will bring the first blackout in this area, when Hood River and the country will cooperate with other areas of Western Oregon in the final test of air maneuvers extending from Oct. 28 to Nov. 1.

At a meeting of Civil Defense Council chairmen, held under the leadership of C.M. Sheppard, the county chairman, at the chamber of commerce, it was announced that Dr. Penn C. Crum an Arthur Hansen will be in charge of the plans to make the blackout in this area all it is expected to be — total. In the News of the coming two weeks, complete details of local plans will be announced and the Civil Defense Committee asks for 100% cooperation from all residents of this county during the brief period to be announced for the total blackout.

The police, fire and other local departments are to work with the various defense units to the end that the Hood River area plays its full part in the air test.

At the meeting Wednesday evening, many details of the air test were under discussion. — Oct. 10, 1941, Hood River News

Tallies are in from community-wide fundraisers to help American Red Cross relief in the wake of the East Coast terrorism.

Students, staff and parents collected about $4,000 in change in Hood River County schools in a coin drive last week for the Red Cross.

The Dalles National Guard unit will receive its first inspection as a rifle company next Tuesday at the armory.

The Dalles Chamber of Commerce is sponsoring a dinner in the Blue Room at Hotel Dalles Tuesday at 6 p.m.

The two-phase inspection will be first for Co. E., 1st Battle Group, 186th Infantry Division, since its conversion from an engineer company Jan. 1 of this year. — Oct. 16, 1961, The Dalles Daily Chronicle

City To Consider Hydroelectric Use Of Water Sources

The Dalles city government is looking into the possibility of developing hydro electric power facilities in its watershed.

At the moment the investigation is centered on several matters, including:

— How many sites are available which could be developed?

— How much power could be produced?

— Which federal and state agencies have money to loan or grant to build the facilities?

— How would the power be sold and to whom?

How would power development and sales affect the cost of water suplies and sales to customers? The goal would be to lower those costs.

The idea has been discussed several times during the past few years. Because of the national and state rush to identify and develop hydroelectric plants on small scales and the money appropriated by Congress and state governments, the concept has become more inviting.

Mayor John Lundell called the idea one of the most exciting he had seen, but cautioned his staff to take great care not to create any expectations of commitment while they explored the options available.

The group expected to visit White Salmon, Wash., today where that city has plans to install a small scale generator in its main water conduit which runs off the mountain to the city. Keyser pointed out that The Dalles Watershed was identified in a survey of Oregon potential hydroelectric sites and that is qualified as one of the top 10. Elevation at the upper water source (Dog River) is 4,300 feet with downtown The Dalles at 88 feet. — October 14, 1981, The Dalles Daily Chronicle

Tie-up Is Faced In Vital Industries

U.S. Supplies Are Sent To Russia

Oregon Supreme Court Getting ‘The Lovers’ in a Test Case

Bombs From Libya Explode In Cairo