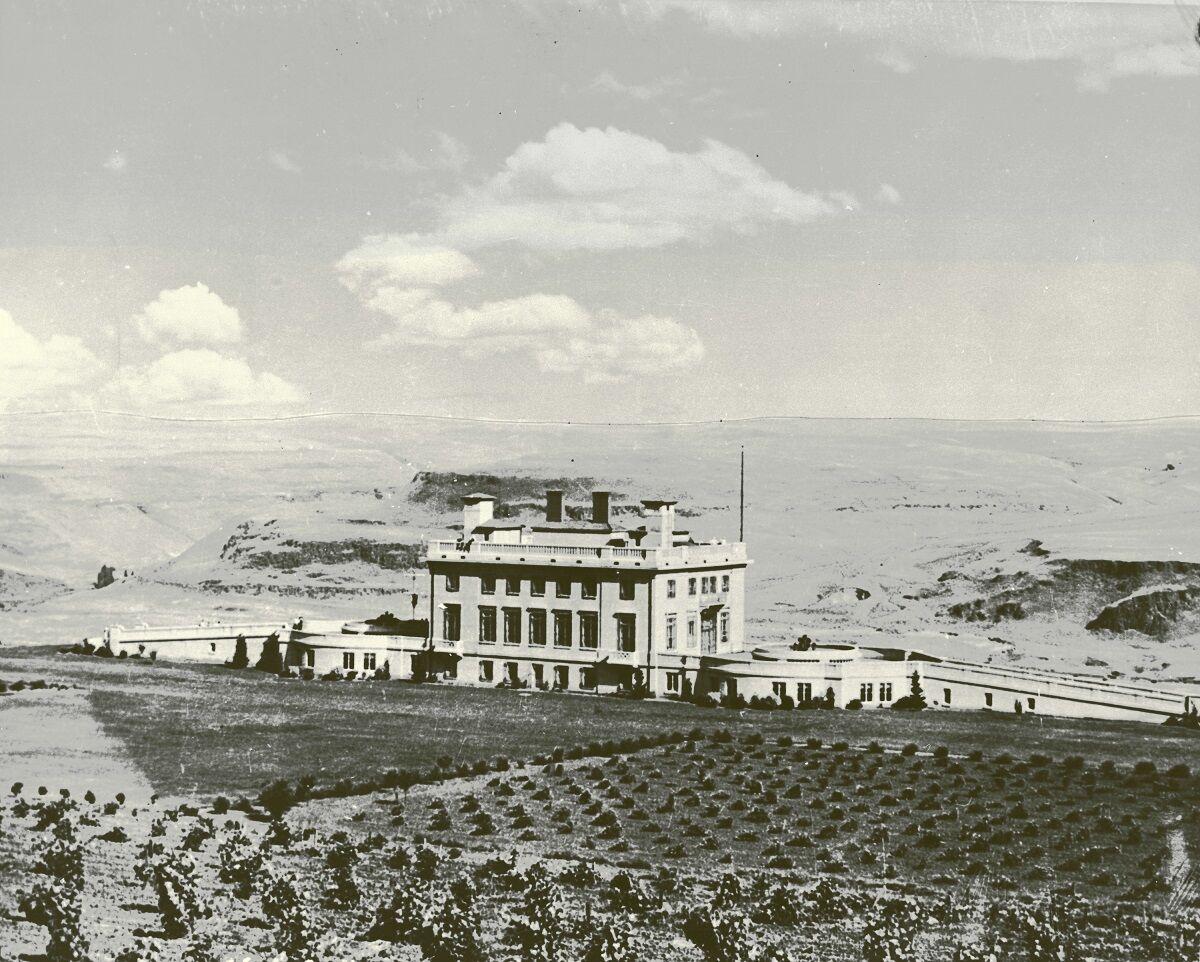 An early view of Maryhill Museum of Art, perched above the Columbia River, photographer unknown. 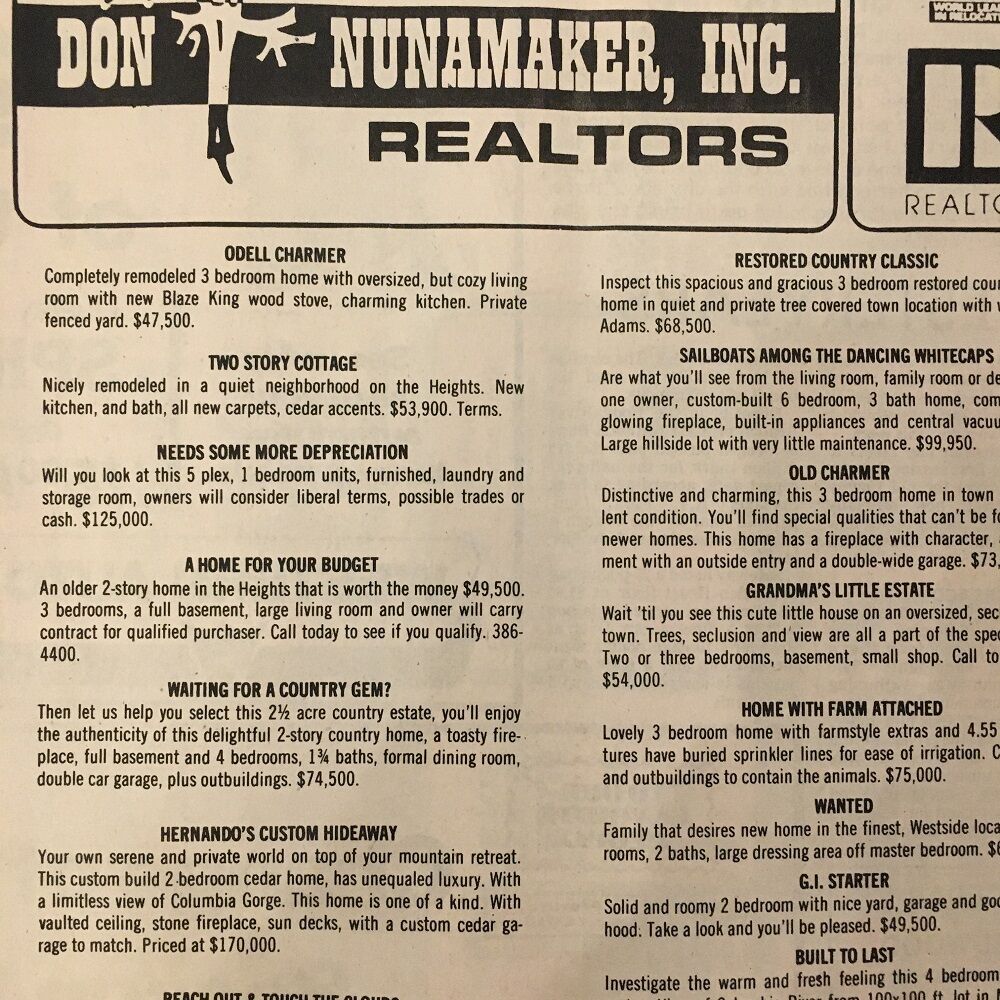 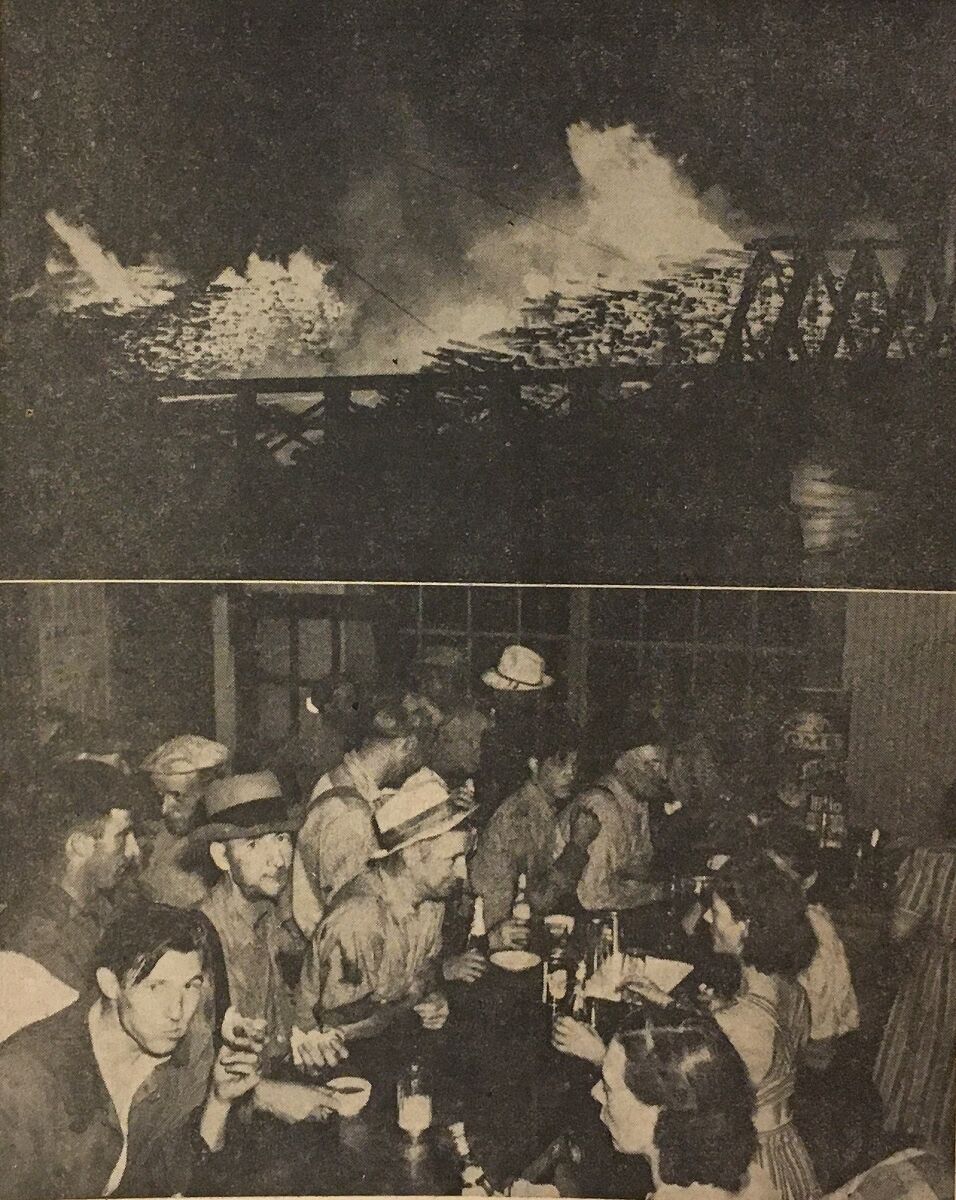 Fire At Oregon Lumber Co. Mill Claims 4 Million Feet: Four “cold decks” were not so cold last Thursday night as fire destroyed approximately 4 million feet of logs belonging to the Oregon Lumber Co. at Dee. Three pumpers from Hood River together with the mill pumps threw an enormous quantity of water into the blaze to prevent a fire that no doubt would have burned the entire town. Lower picture was taken in the company restaurant about 2:30 in the morning after it was thrown open to firefighters for food and refreshments. — Hood River News, July 25, 1941

As a result of a number of watch night parties held near Oak Grove recently, there are several guesses, each as good as the other, as to the nature of the animal that is playing havoc with the chickens of that neighborhood. Those who have seen it fired at it and missed it, are assured it is a cougar, timber wolf or coyote, but another says he believes it might be a skunk if it had a smell. One fact is assured, something is taking the chickens and walks on four legs. — Hood River News

Alleging that he has been defrauded out of approximately $29,000 in a land deal, Ralph E. Butler today filed suit in the circuit court against W. A. Woods and the United States National bank of La Grande, asking for a complete accounting. The workings of the land deal, which involved extensive holdings in Union and Wasco counties, are of an extremely complicated nature and a big legal battle is anticipated when the case comes up for trail. — The Dalles Daily Chronicle

Just about the time residents of Hood River County were biting hard as a result of the news that the aluminum plant had been politically shunted from Cascade Locks to a site nearer Portland, word reached Hood River that a serious fire was out of hand at the Oregon Lumber Company’s plant at Dee, and there was more gloom — and action. Within a remarkably short time, one Hood River pumper was on its way to Dee and, as the fire steadily grew in dimensions and threatened to involve the mill and other property, arrangements were quickly made for firefighting equipment and men to come to this city from White Salmon and The Dalles to be ready for any emergency during the absence at Dee of all of the Hood River equipment, the two large pumpers and the emergency pumper. — Hood River News

With the Wasco county quota of $700 for the current United Service organizations drive attained, Paul R. McCulloch, co-chairman of the local drive, today announced that final contributions will be received this week ... Maupin was the first town to exceed its quota. A.W. Gust is in charge of the Maupin drive. — The Dalles Daily Chronicle

The Goldendale office of the Oregon-Washington Telephone Company received extensive damage Thursday evening, July 20, as a result of fire in a store adjoining the telephone facilities. None of the telephone equipment was burned, but smoke, water and tar covered all equipment, causing it to become useless. Pacific Northwest Bell sent in a mobile switchboard until with temporary facilities, which were used for emergency calls until Thursday, when it was possible to return to normal service. — Hood River News

Surviving some of the bloodiest battles of the Pacific during World War II without a scratch, Wasco County Juvenile Officer John Cain Wednesday night failed to negotiate a low drive-way fence and broke his right elbow. During World War II the county juvenile officer — a naval medical aid man — served in such bloody battles as Iwo Jima and, though sometimes in the thick of it, escaped unscathed. — The Dalles Daily Chronicle

It’s the 60th time around for the Hood River County Fair. Theme for the fair this year is “Look to the Future, but Remember the Past.” Fair Manager Percy Jensen said the theme is especially significant because next year the fair will have a new building. Looking to the past, Jensen is keeping the best of what people have enjoyed for decades, and is adding to it. The Wednesday schedule called for a boxing tournament an hour after the official opening and start of the barbecue. — Hood River News

A team of surveyors working on the Scenic Highway through the Columbia River Gorge have finished their first three stages of work and will discuss findings Tuesday at 7:30 p.m. and take public comment. The survey team was formed to catalog the resources of the highway with prospects of its preservation. — The Dalles Daily Chronicle

Gov. John Spellman stopped in White Salmon on his tour of the Gorge Tuesday, and got the chance to visit with some local residents. “We couldn’t have asked for better weather. It was a great trip,” Spellman said as he and his party came ashore at the Bingen Marina Tuesday afternoon. The “BJ,” a 45-foot yacht owned by John Hounsell of Hood River, was used for the trip from Cascade Locks. Gov. Spellman was also accompanied by Rep. Bob Chamberlain, a White Salmon Republican, who later took the governor and his entourage of a walking tour of downtown White Salmon. The governor visited with businessmen, purchased a few items and met Mayor Cecil Jaksha. A dinner at the Erik Karlsson residence capped the evening for the governor and his family. The group spent the night at the White Salmon Inn. Back in Vancouver later that week, Spellman announced his appointments to the Governor’s Select Committee on the Columbia River Gorge, including counselor to the governor Edward J. Devine, Sen. Hal Zimmerman, Rep. Denny Heck, and Fred Holly, Klickitat County Commissioner. “The Gorge is a priceless resource that must be preserved,” Spellman said in a press conference. — White Salmon Enterprise

A group of 10 Community Education art students have given the Hood River Chamber of Commerce a lesson in cooperation. The students produced a mural based on the theme “Working Together,” which was dedicated at a recent chamber board meeting. The colorful mural will remain on permanent display in their board room. The mural depicts as many aspects of the Hood River Valley as students could cram in its 8-by-4-foot frame. — Hood River News

Electricity customers of Northern Wasco County PUD can expect their electricity rates to take a jump Oct. 1, but the question of how much is still a few days away from a final answer. — The Dalles Chronicle

The proposed state budget approved by the Washington Legislature last week contained some bad news for Klickitat County Mt. Adams Transportation Services. If the budget is not amended it could spell the end for the newly created bus service that connects White Salmon and Bingen with Hood River, Dallesport, The Dalles, Goldendale, and points in between. That service began April 9. According to Roger Gadway, director of the transportation agency, the budget shortfall was only a few hundred thousand dollars. “The current budget has $3.5 million for rural mobility, and we needed them to provide $3.9 million to get funded,” Gadway said. “We’re trying to figure out what to do from here.”— White Salmon Enterprise

Joe Burman’s “first attempt” in crime may be his last attempt for some time to come. Burman was arrested in The Dalles last night by Patrolmen Crate and McClaskey.

The policemen merely picked him up on suspicion, but when they searched him in the city jail they found a big army revolver and a black scarf, such as is commonly used by highwaymen as masks, in his hip pocket. He was held pending investigation.

This morning he told a strange tale of adventure to Chief of Police Heater. He “borrowed” a canoe from the Kellogg boat house in Portland July 4, he said, shipping it to Lewiston, Idaho. He then made the trip to Lewiston by train, launching the canoe in the Snake river and heading downstream.

“I wanted to make a trip down the Columbia in a conoe and didn’t have enough money to buy one, so I simply borrowed a good one from the boat house,” he naively told the chief.

“It’s the first time I ever had anything that didn’t belong to me,” he added.

He went on to tell how he had come through the Snake River into the upper Columbia and then on down. He “shot” all rapids along the route with the exception of the Celilo rapids, passing through the Celilo canal instead.

“I had planned taking the canoe back to Portland, paddling up to the boat house some dark night and leaving it there,” he explained.

Burman carried a complete camping outfit along with him, inlucidng a supply of food. He also had and expensive cornet, which he practiced while floating with the current, he said.

He only carried the revolver for protection, he claimed, and the black scarf was only a coincidence. The police believe, however, that he had planned to stage a hold-up in The Dalles to recoup his finances. He had 35 cents in his purse when arrested.

A diary, giving his experiences along the trip, was found in one of his coat pockets. He tells of “bucking the wind,” and other hardships encountered on the trip. Quotations from the Scripture are interspersed freely among other remarks in the diary.

He is being held pending information from the Portland police as to whether or not there are any charges against him. — July 28, 1921, The Dalles Daily Chronicle

Welfare Meeting Has Much Talk, Little Else

Washington to assess penalties at Hanford