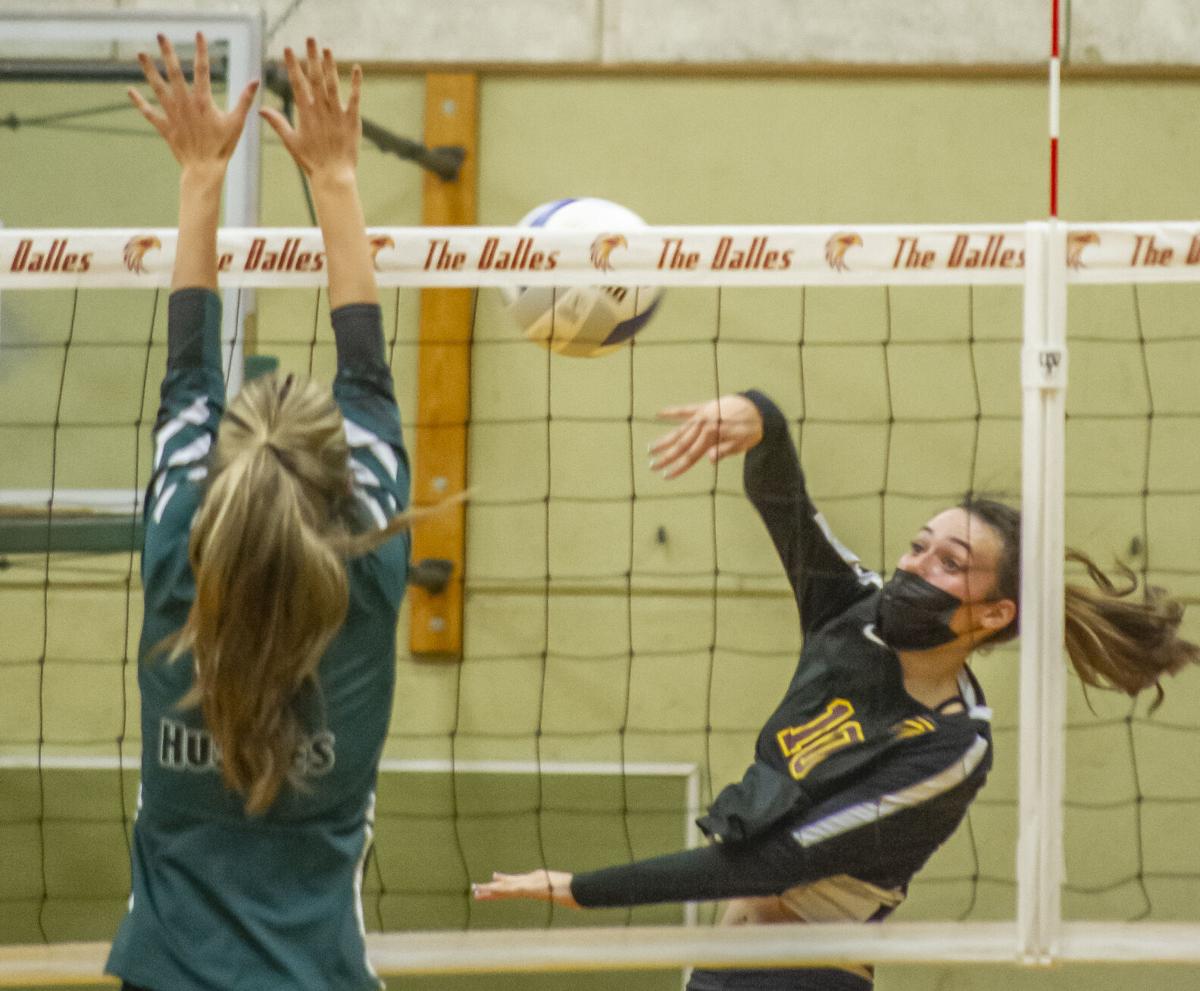 The Dalles junior Marquies Sagapolutele takes a shot at the North Marion High Huskies during their non-league matchup Sept. 2 at the Wahtonka Campus of The Dalles High School. Mark B. Gibson photo 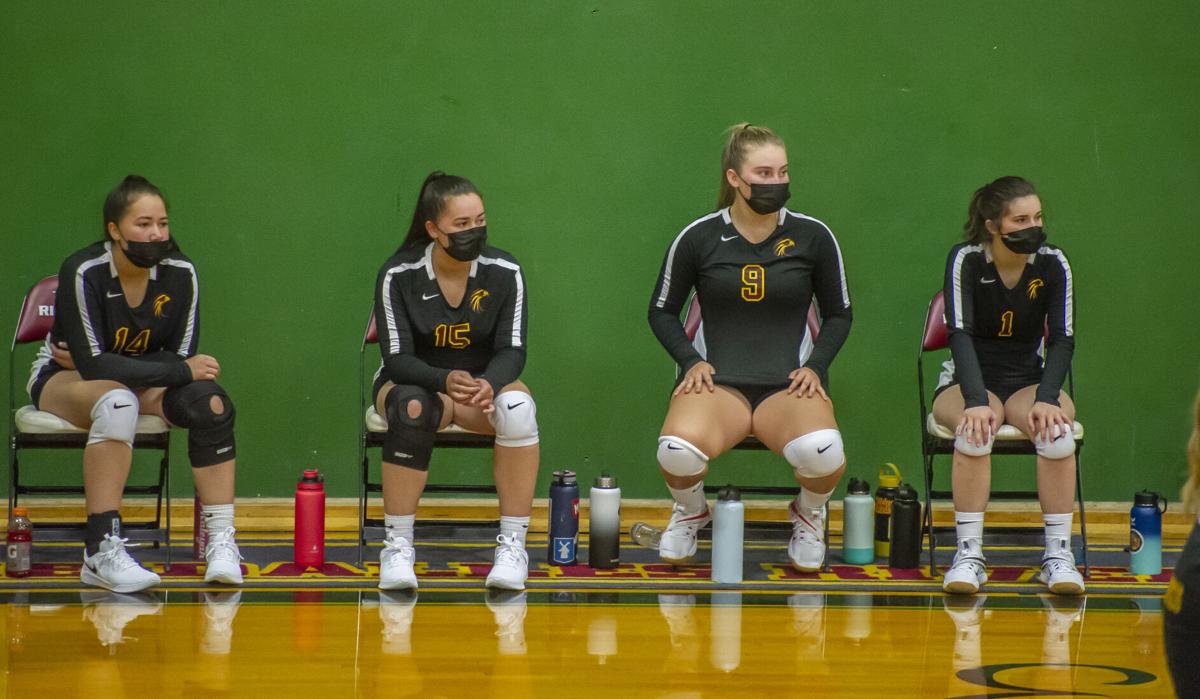 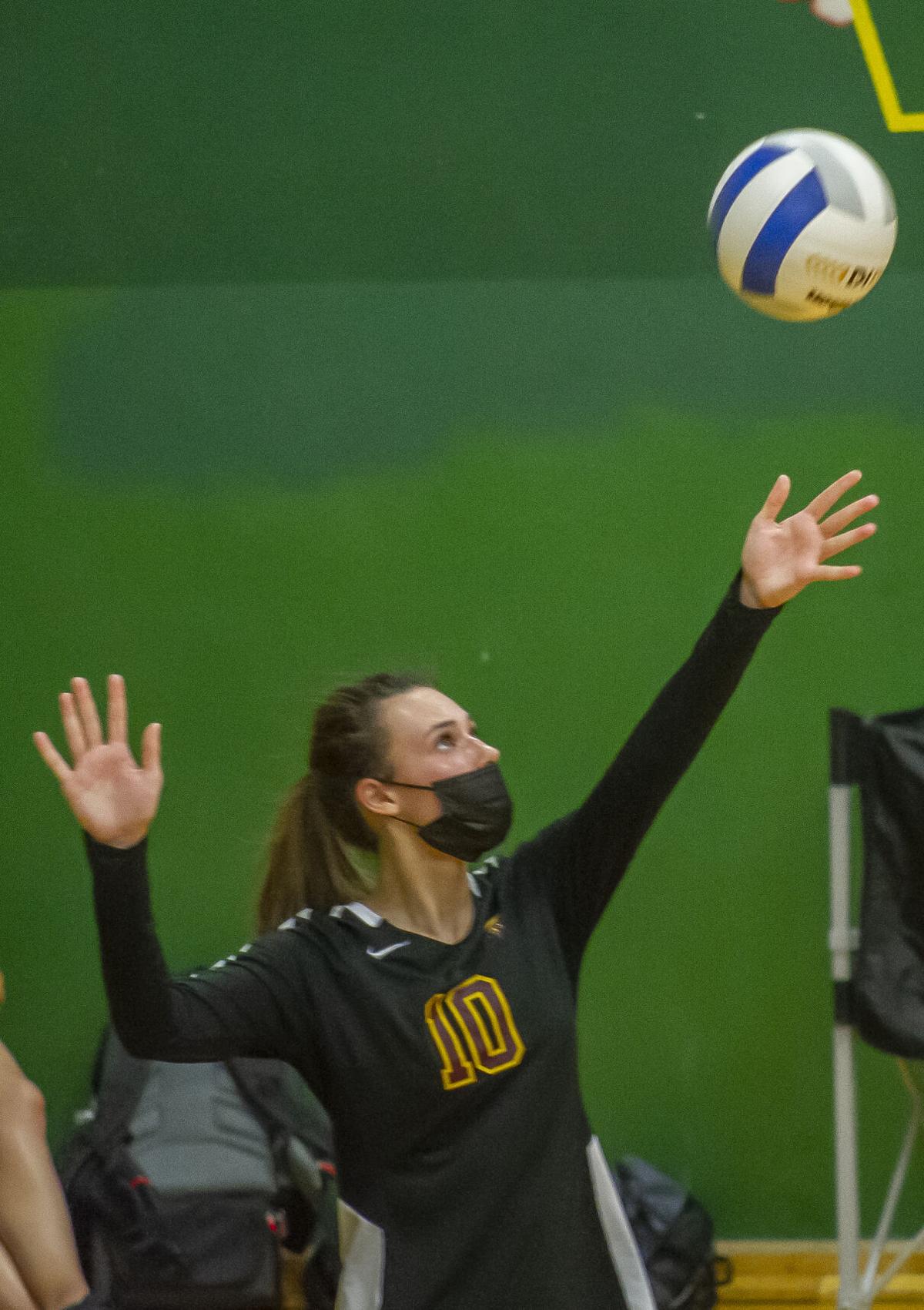 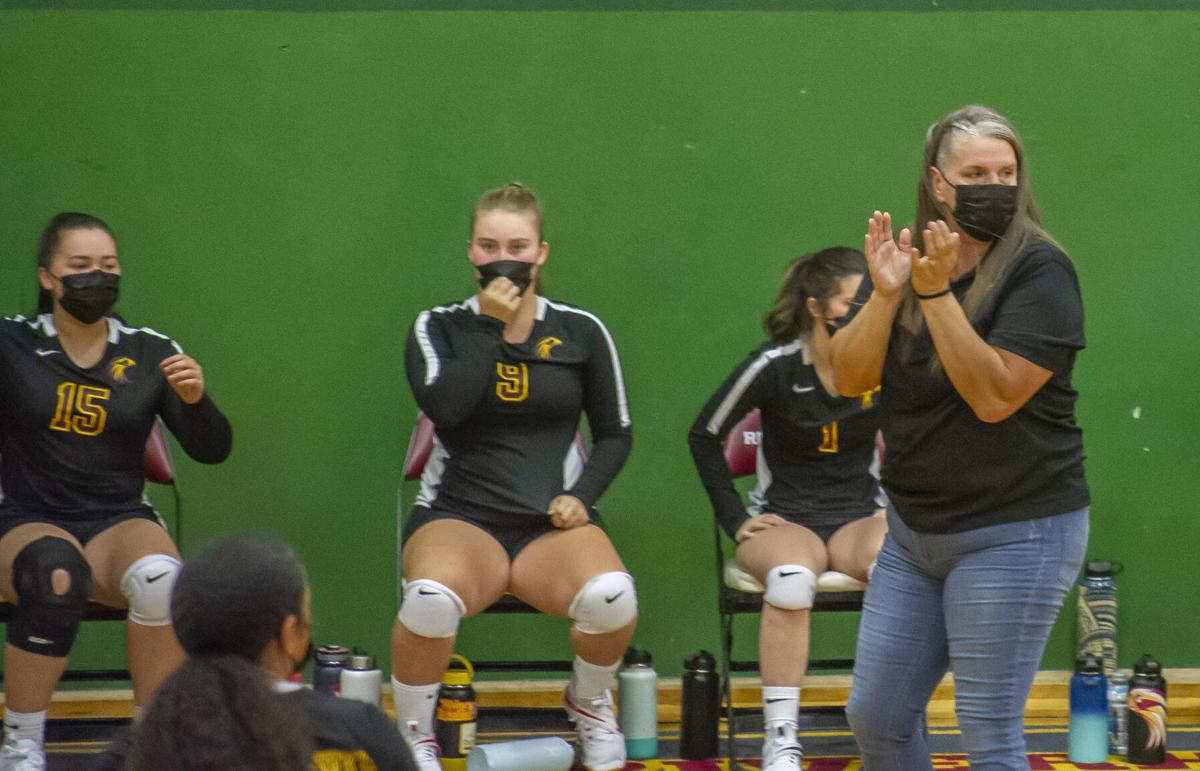 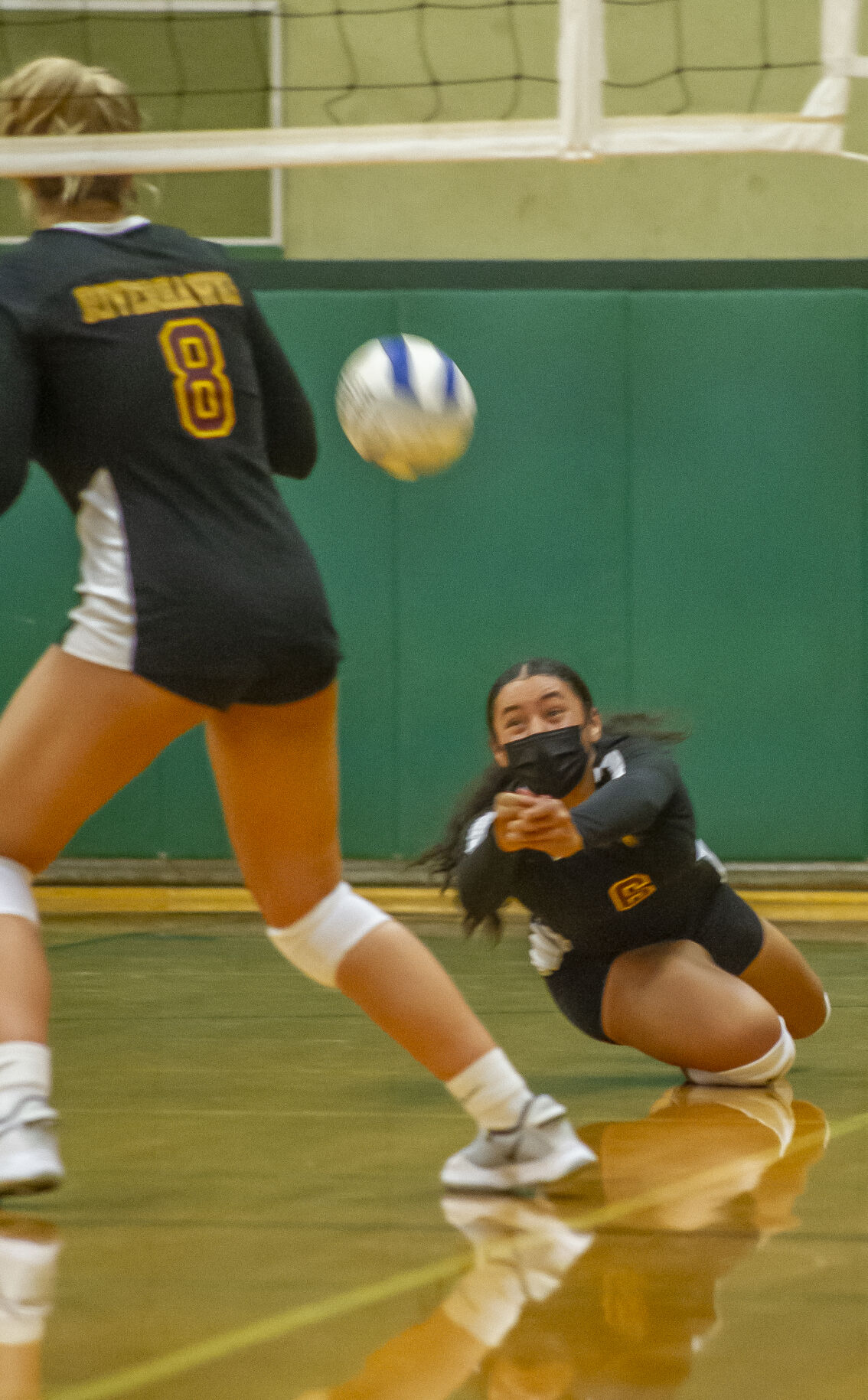 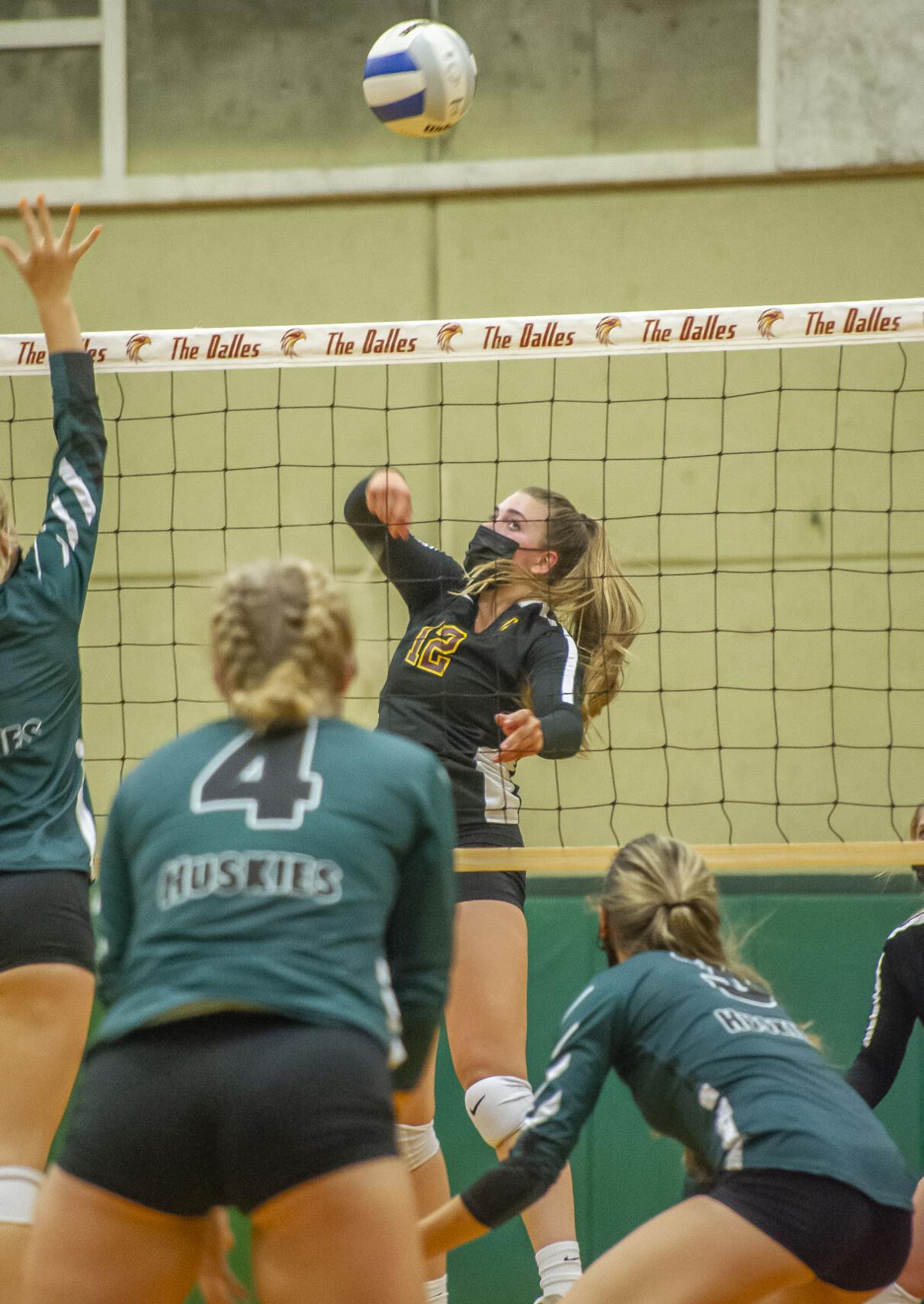 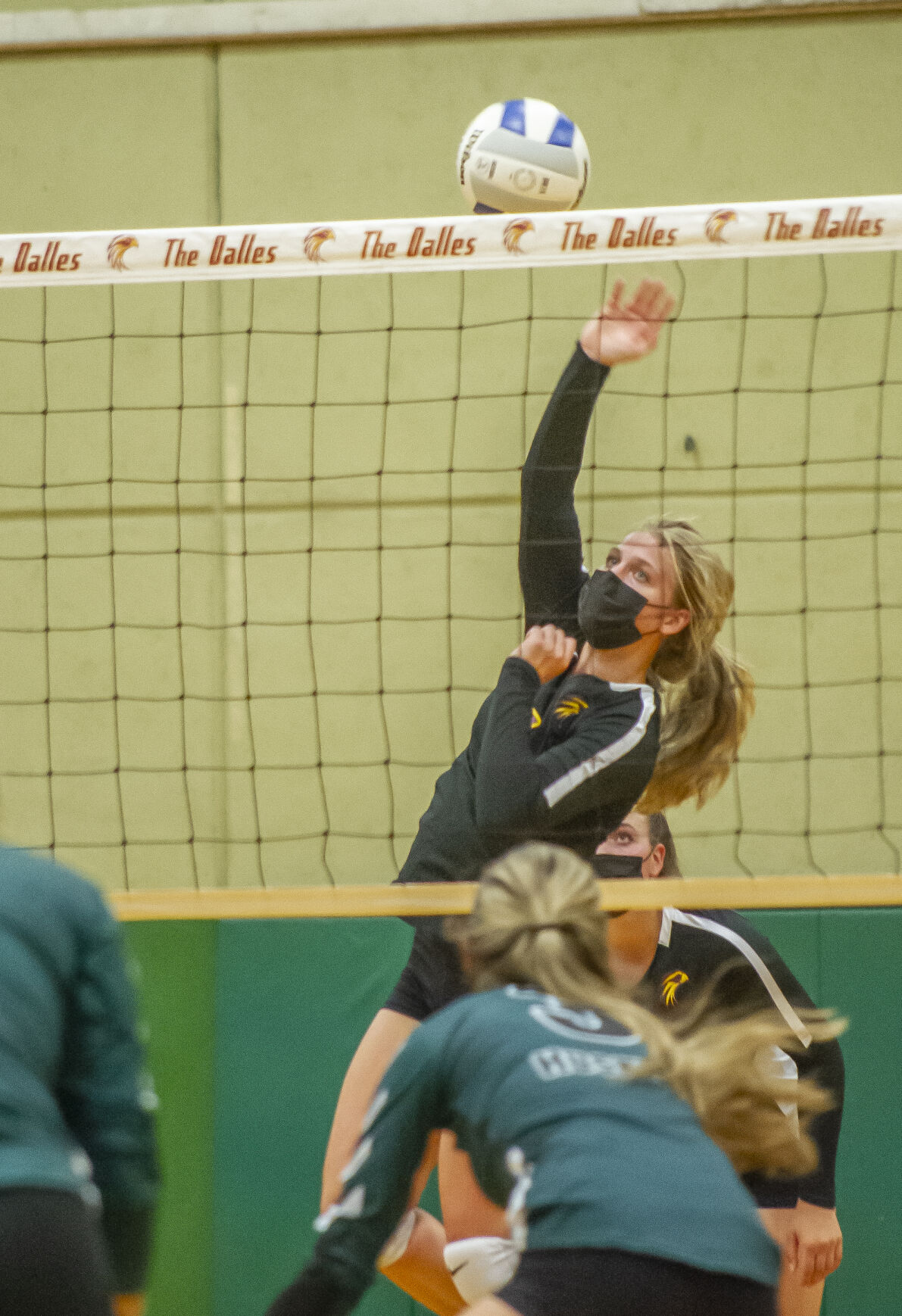 The Dalles junior Marquies Sagapolutele takes a shot at the North Marion High Huskies during their non-league matchup Sept. 2 at the Wahtonka Campus of The Dalles High School. Mark B. Gibson photo

Led by the trio of Kaylee Fleming, Kennedy Abbas and setter Jeilane Stewart (65 assists, 12-for-12 serving, one ace), the Riverhawks had lots of momentum and they played with a high intensity level throughout the match to get the sweep by the score of 27-25, 25-22, 25-20.

It was certainly a hard-fought match against the gritty Class 4A Huskies of the Tri-Valley Conference. North Marion enjoyed leads in each set, but the Hawks always responded with a rally to overcome the deficit. The Riverhawks, guided by first-year Coach Julie Summers, will try to get a second straight win when they play the La Grande Tigers (1-0) in a 6:30 p.m. nonleague contest today at La Grande High School.

“I’m super proud of the girls and it’s great to get a win in our first home game and now we’re going on the road until October,” said Summers. “The girls like playing on the road, even though it’s a lot of traveling. They’re looking forward to doing the road work now and then finishing the season with some home games.”

A thrilling, seesaw first set that included numerous ties, saw both teams hold one-point leads often, but neither squad had a lead of more than two points. The Dalles held a two-point advantage at 21-19 late in the set after a service ace by sophomore middle blocker Zoe LeBreton (five kills, one block).

North Marion fought back and appeared to be on the verge of getting the victory while on top 24-22. A kill by junior middle blocker Abbas (10 kills, three blocks) knotted the score 24-24, and the Hawks gained a 25-24 lead after a Husky hitting error. The Huskies came back though, tying it 25-25. A tipped ball to the floor by junior outside hitter Zoe Dunn helped the Hawks come out on top for the 27-25 win.

“This is a great way to start the season; the whole team played great and I’m very proud of how we came together,” said Abbas. “They (Huskies) are a good team, but we came out to play and I think that we showed them how good The Dalles is and I’m proud of everyone. There’s a lot of good girls on our team and we have lots of talent. I’m excited because I think we have the potential to be one of the top contenders in our league and I think we’re going to have a very good season.”

The second set was nearly identical to the first, as the two evenly match squads continued battling hard, with neither team leading by more than four points. There were five lead changes and 10 knotted scores.

“Kennedy had a great game and our setter Jeilane Stewart played great, too, because if she doesn’t put the ball where she needs to then those kills don’t happen,” said Summers. “It was definitely a team effort. Kaylee also had an amazing game, too, and she was moving the ball all over the court, while not keeping it in the same spot. We’re doing things together and we’re gaining confidence with each and every play and we’re excited to see what happens. I’m glad we won in three sets. We had to earn every point and lucky for us, we came out on top.”

LeBreton (14-for-17 serving, four aces) helped The Dalles jump in front 4-0 as she connected on four straight points from the service line, including back-to-back aces. The never-say-die Huskies then had a 5-1 rally, knotting it 5-5 for the first tie score.

The two squads then fought tooth and nail while constantly diving onto the floor for digs throughout the set. After North Marion went up by two at 16-14, the Hawks came back and an ace by junior outside hitter Lydia DiGennaro (five kills) knotted it 16-16.

North Marion then appeared to take control, going up 19-16. The Huskies’ largest lead of the set didn’t last long though. After Abbas pounded two hits to the floor, the Huskies had a hitting error with a ball hit into the net and the Hawks tied it 19-19. An Abbas kill made it 20-19 and it was 21-20 after the teams traded points.

A kill by junior outside hitter Fleming put the Hawks up 22-20, forcing a North Marion timeout. Fleming them tipped a ball to the floor for set point at 24-21 and LeBreton pounded a set-winning kill for the 25-22 win.

“I think we did really good as a team by playing so well together,” said Fleming. “It’s really nice to get some good kills and score some points. The first set and the last set were pretty close. I’m proud of how well everyone played, and we all did a good job of communicating with each other. If we all stay focused and keep our heads up, I think we’ll have a really good season.”

The Hawks seemed to be gaining momentum with each set win and they brought their brooms out for the third set while they were focusing on getting a sweep.

“We worked through some different rotations to try and figure out what the right chemistry is for our team,” said Summers. “Everybody’s doing their job and staying positive. All 10 of our players have roles, whether they’re on or off the court and we’re working hard together every day at practice.”

The match at Wahtonka was the first for the The Dalles High volleyball team. It will be their home away from home now because The Dalles High’s Kurtz gym is closed for a construction and remodeling project. The Hawks won’t play any games this season at The Dalles High and won’t have another home game until Oct. 7.