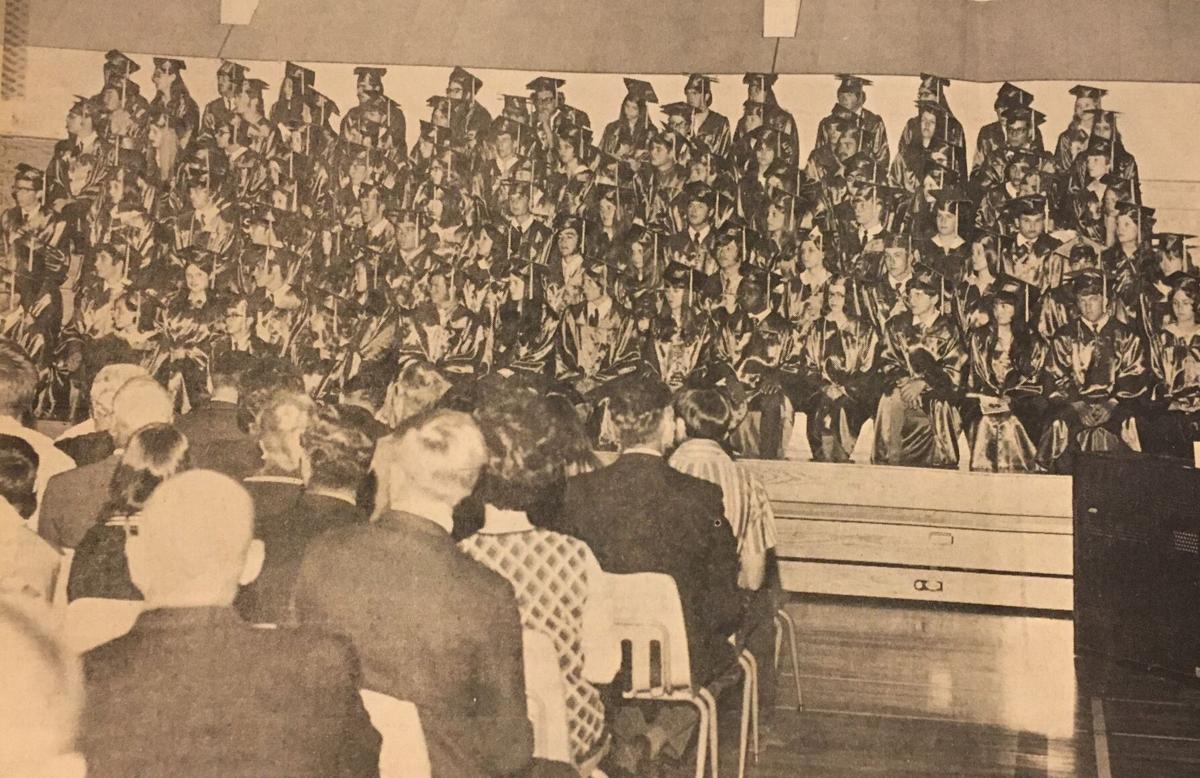 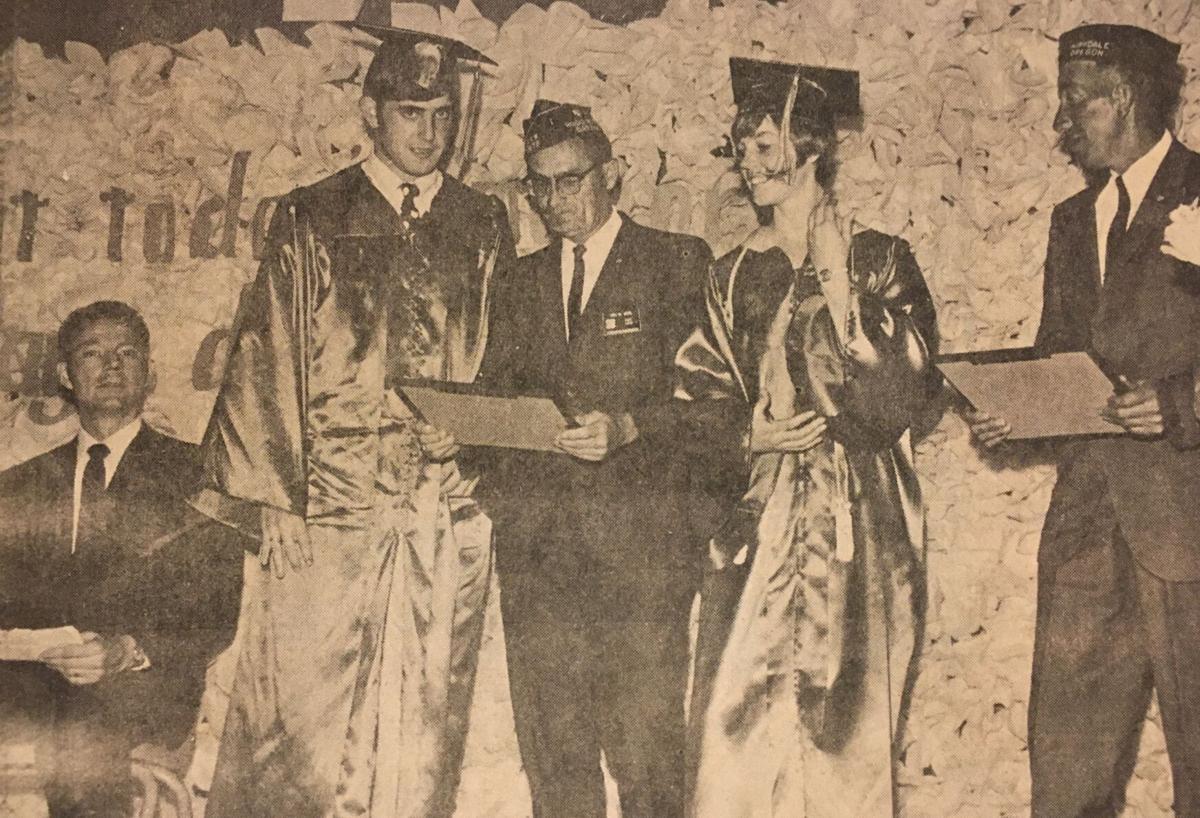 “Citizenship recognition for outstanding service wasn’t announced until it was presented here. Receiving the VFW-sponsored award for a boy is Jon Crossland, standing at left, student body president. He’s receiving the honor from Ora Sal of the Hood River VFW post. Receiving the award for a girl is Helen Hanel, whose certificate is held by Larry Holsman of the Parkdale VFW post. At left is Assistant Principal Earl Fowler.” 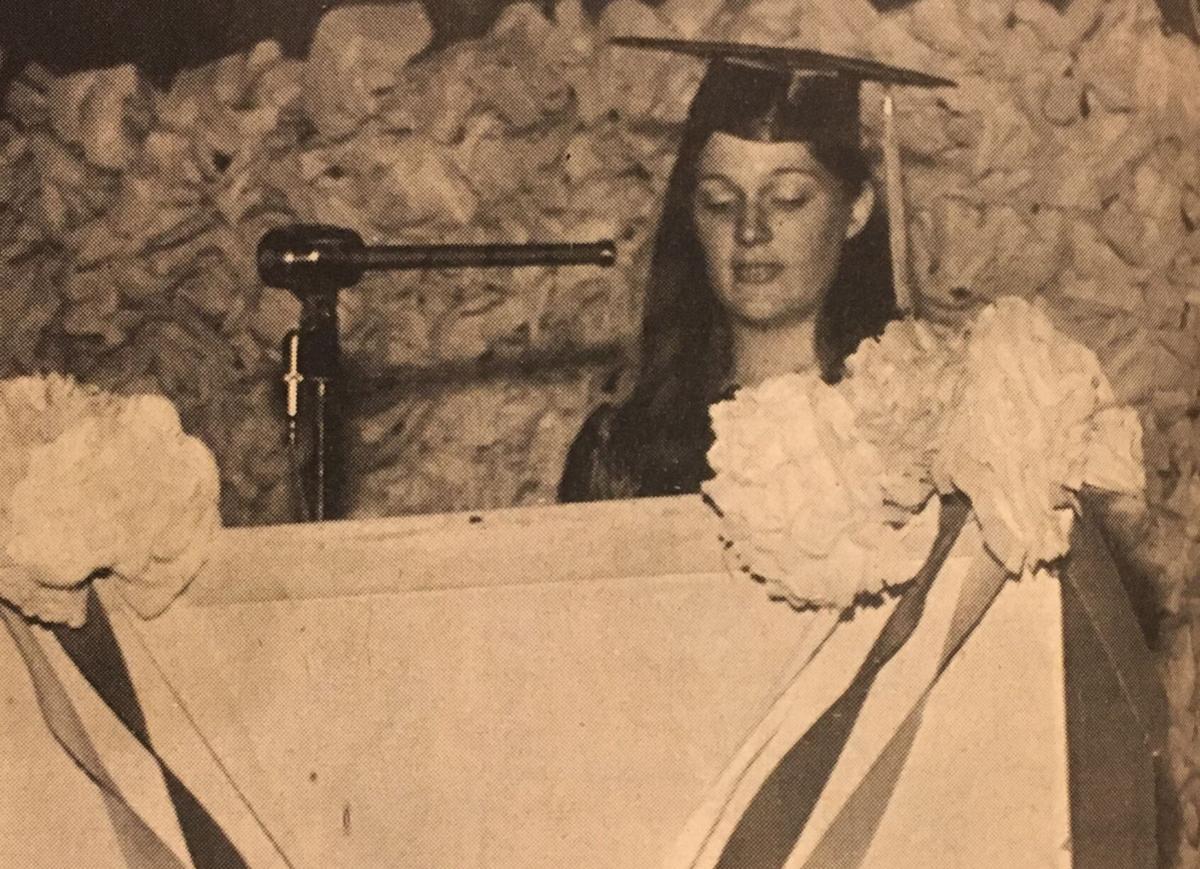 “A big moment for the Hood River Valley High School class of 1971 came when Jan Magnusen, class president, made the class gift presentation to the school, then led the graduates in a traditional tassel switching ceremony signifying completion of their school year.”

Full disclosure: I graduated from Hood River Valley High School in 1990, my husband in 1989 and our oldest daughter in 2017. Our youngest begins her junior year this fall and yes, she’ll be an HRVHS grad too.

So when I took a phone call recently regarding the HRVHS class of 1971’s 50th reunion Aug. 6-7 — the school’s first graduating class — that piqued my interest.

Since Yesteryears has been one of my pet projects dating back to my Hood River News days, I decided to take a dip into the archives and see what I could uncover about the beginnings of my alma mater.

Hood River and Wy’east high schools were converted to junior high schools in the fall of 1970, when Hood River Valley High School combined the two at its Indian Creek location. But before that happened, students from the two schools began meeting in 1969 to come up with what were referred to as “traditions” for the new school — including its mascot.

“They’ll call it Hood River Valley High School, and they’ll call the teams ‘The Rams,’ if present plans of the Traditions Task Force gain final approval. The Task Force, working on the theme ‘The Hood River Valley — Its Heritage,’ is continuing a project to select manes within the theme to apply in the school. Through the school’s history, its traditions will be based on the theme as developed by the committee and have a bearing on it.”

I gasped, Reader, because everyone knows that HRVHS is Home of the Eagles. The Rams? What is this nonsense? The nonsense continued, though, into the next paragraph:

I mean, okay, I guess I can see why The Rams sort of make sense? Actually, no, never mind, I really can’t.

Equally as surprising: The school name could have been Mt. Hood High; that name lost in a poll. The Nov. 20, 1969, Hood River News announced that Hood River Valley High was the official name for the school then under construction.

But Trisha, you may well be asking, what happened to The Rams? I have no idea. In that same Nov. 20 issue, the newspaper announced that the mascot was The Golden Eagle, “a carryover from the present Wy’east High School.” I can find no mention of how the Task Force arrived at this (obviously correct) decision. The school colors of royal blue, gold and white were also selected at that time.

And that was the last mention of the Task Force and its work.

On May 28, 1970, the News reported, “A landmark in Hood River school history arrives next week. On June 4-5, two high schools will end their history as senior classes as Wy’east and Hood River go through graduation exercises.”

On June 11, the News reported, “More than 200 high school seniors went through rituals at valley high schools last week to close the history of graduation at Wy’east and Hood River high schools. For Hood River, it was the 65th annual commencement … Wy’east High was relatively young. It’s outdoor ceremony of Friday evening, June 5 was only the 19th.”

In honor of the HRVHS class of 1971’s upcoming 50th reunion, I also looked into that first graduation ceremony. From the May 27, 1971, Hood River News:

“Day by day, machinery has gradually been grinding toward a landmark for Hood River Valley High School — graduation of its first class. Last day of school for graduating seniors was last Thursday, the class went through Baccalaureate on Sunday, then they prepared for commencement Thursday, May 27 at 8 p.m. in the high school gymnasium. About a thousand seats will be reserved for families of the graduates in the class of 1971 and the rest will be open to the public on a first come, first served basis.”

The June 3, 1971, issue contained a photo page of graduation (some reproduced here; photo credit is identified by slightly enlarged text that reads, “All photos on this page by Kollas.”)