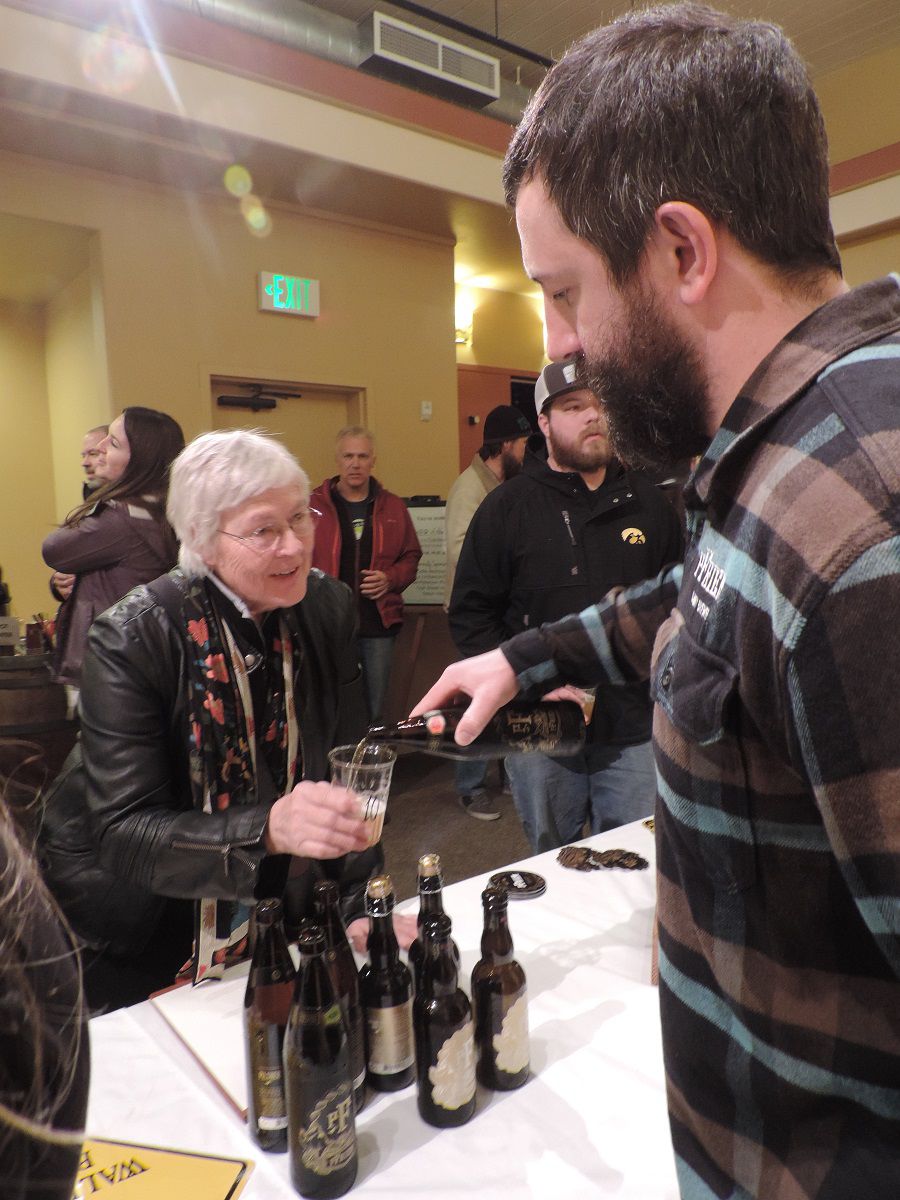 BEER MAKERS of the Gorge, including Josh Pfriem, pouring for Mimi Macht, share their wares Feb. 3 at the Sense of Place lecture. Pfriem has announced plans to expand to the entire 20,000 square-foot Halyard building on the waterfront, making it the second largest brewery in Hood River, after Full Sail. 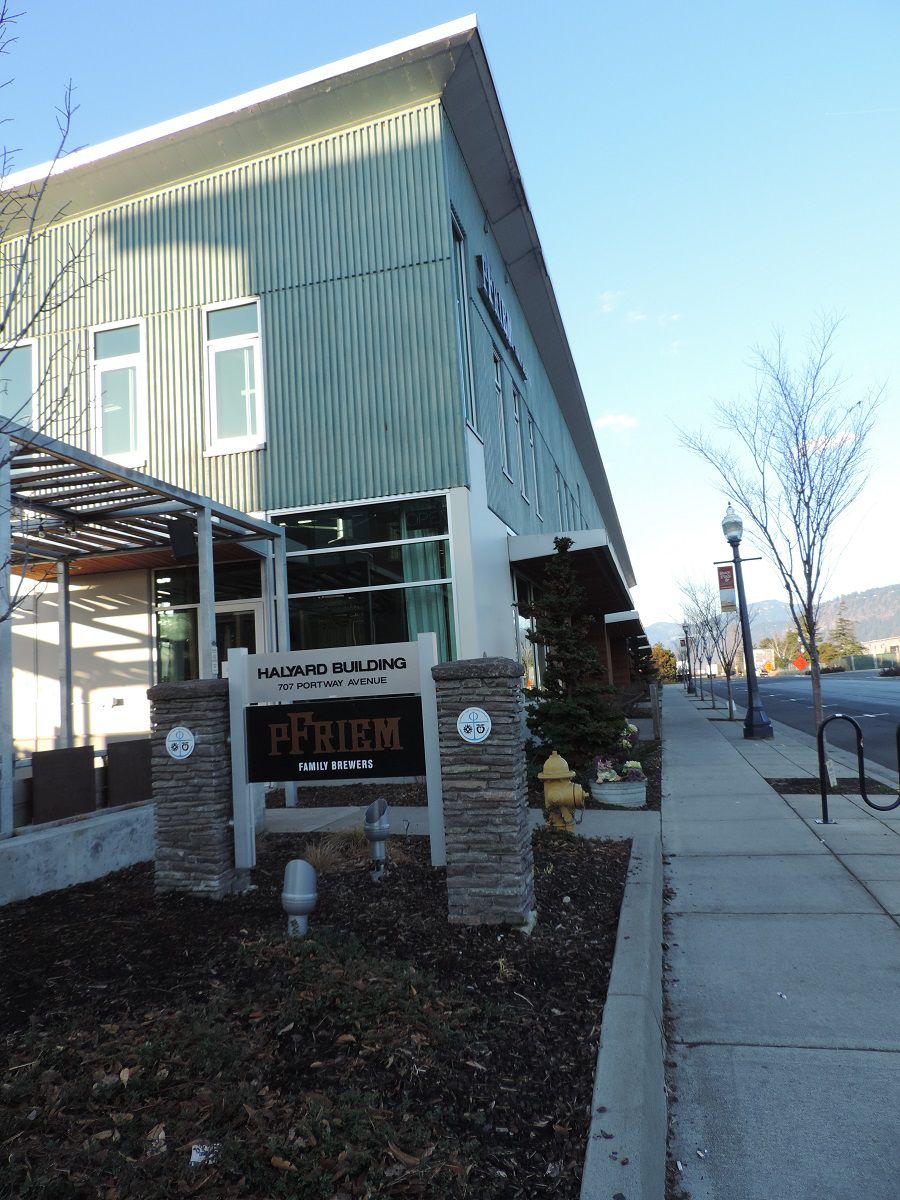 PFRIEM’s entrance and patio are at the east end of the Halyard Building; next they will take over the rest of the Port of Hood River waterfront building.

BEER MAKERS of the Gorge, including Josh Pfriem, pouring for Mimi Macht, share their wares Feb. 3 at the Sense of Place lecture. Pfriem has announced plans to expand to the entire 20,000 square-foot Halyard building on the waterfront, making it the second largest brewery in Hood River, after Full Sail.

PFRIEM’s entrance and patio are at the east end of the Halyard Building; next they will take over the rest of the Port of Hood River waterfront building.

Hood River’s fastest-growing brewery, pFriem Family Brewing, is preparing to expand for the fourth time in less than four years in operation.

Pfriem currently occupies most of the building, taking on the middle section a year ago to expand its sour production, storage and bottling space, along with expanded offices. It also added an outdoor patio with central fireplace.

The Halyard building is split up into four suites. In 2012, pFriem started in 101 with 6,000 square feet, then moved into 102 in 2013. Until recently, the building was also the home of Pocket Fuel and Real Carbon.

Last year, they moved completely into Pocket Fuel’s space. Real Carbon relocated earlier this year, opening up their portion of the building. On Feb. 2, pFriem was approved by the Port of Hood River to occupy the entire building.

“I remember back in 2009 when the outside walls were going up on the Halyard building. I thought to myself, ‘What an amazing and beautiful place to house a brewery.’ We were thrilled when we signed our lease in 2011 to start building our brewery here, but it is a dream to have the whole building to grow into,” said Brewmaster Josh Pfriem.

The newly acquired space means big opportunities for pFriem. They will be able to boost their production to 20,000 annual barrels of beer in addition to expanding their barrel-aging and fruit programs.

pFriem plans to release 37 beer varieties in bottles throughout 2016 — 11 of those will be barrel-aged beers. The extra space lends greater possibilities for variety, creativity, and continued consistency of quality in pFriem beers. It also means more production of award winning beer, such as their Great American Beer Festival silver medal winning Pilsner. Pfriem expands upon his vision for the space, stating, “We have built a brewers’ playground for a brewery. We have the ability to make high quality lagers, innovative hop-forward beers, Belgian-inspired beers, barrel-aged beers, and fruited beers. With this new space we will be able to brew more pFriem classics and be able continue to stretch our creative legs.”

“This will give us better efficiency, faster through-put and better flavor and quality, and expansion added across the board, along with higher level equipment from a semi-automated cleaner-filler to centrifuge for clarification and capacity for all the bottling we’re doing, and significant boost in barrel age production and storage,” pfriem said.

Barrel aged ales will total 300-400 of the brewery’s overall projected 10,000 barrels in 2016. To put the expansion in perspective, pFriem started in 2012 as a 1,500-barrel brewery. Pfriem employs 60 people, with seven brewers and a total of 18 in brewing and other non-restaurant jobs.

“It’s a small portion but pretty good amount of barrel aged beers compared to what a lot of folks are doing,” he said. “Barrel aging is always a challenge — you always run out of space so quick and there’s never enough money or time to put into barrel aging, but we’ve made it a priority since the very beginning,” Pfriem said.

“It’s a pretty dynamic process, but 2016 will be the year we will reap some of those rewards. We’ll have 11 barrel aged releases.”

The expansion will not affect the restaurant portion of the business, which is a year-round active concern, with one-hour seating waits typical during January. Last year Josh and his wife, Annie, opened the upper room to seating and meeting space, fitting it with couches and board games to go with river views, dubbing the new space “The Library.”