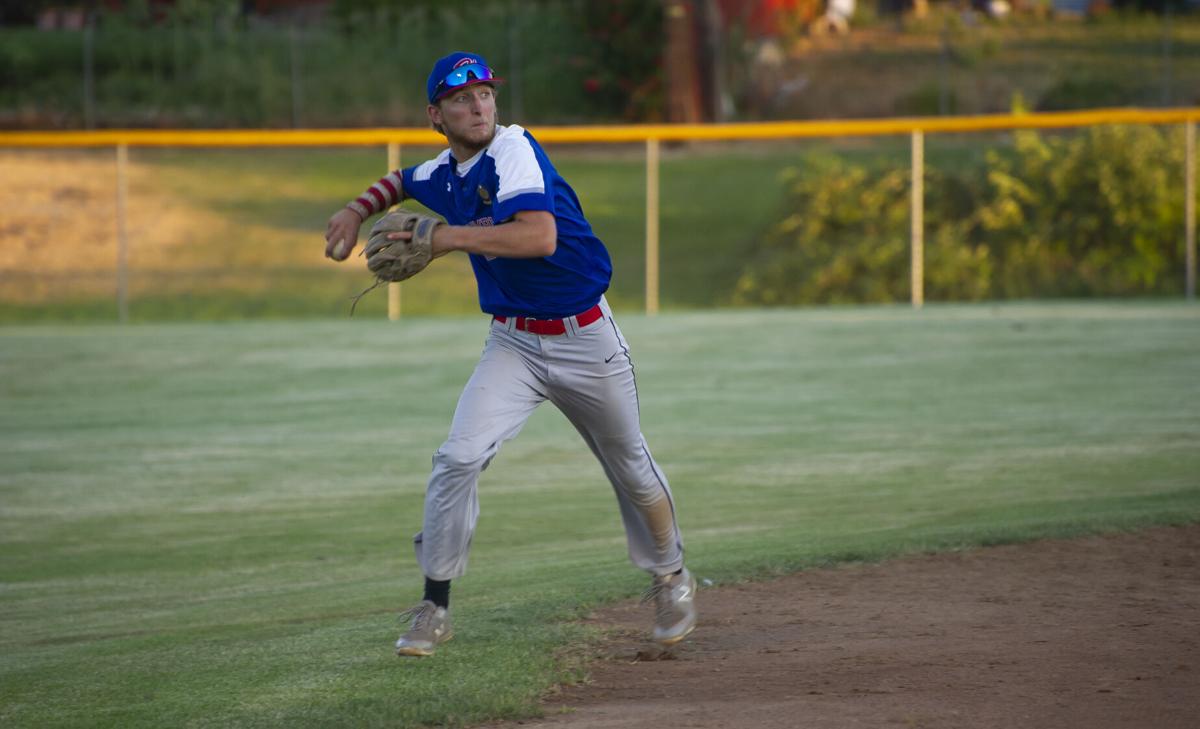 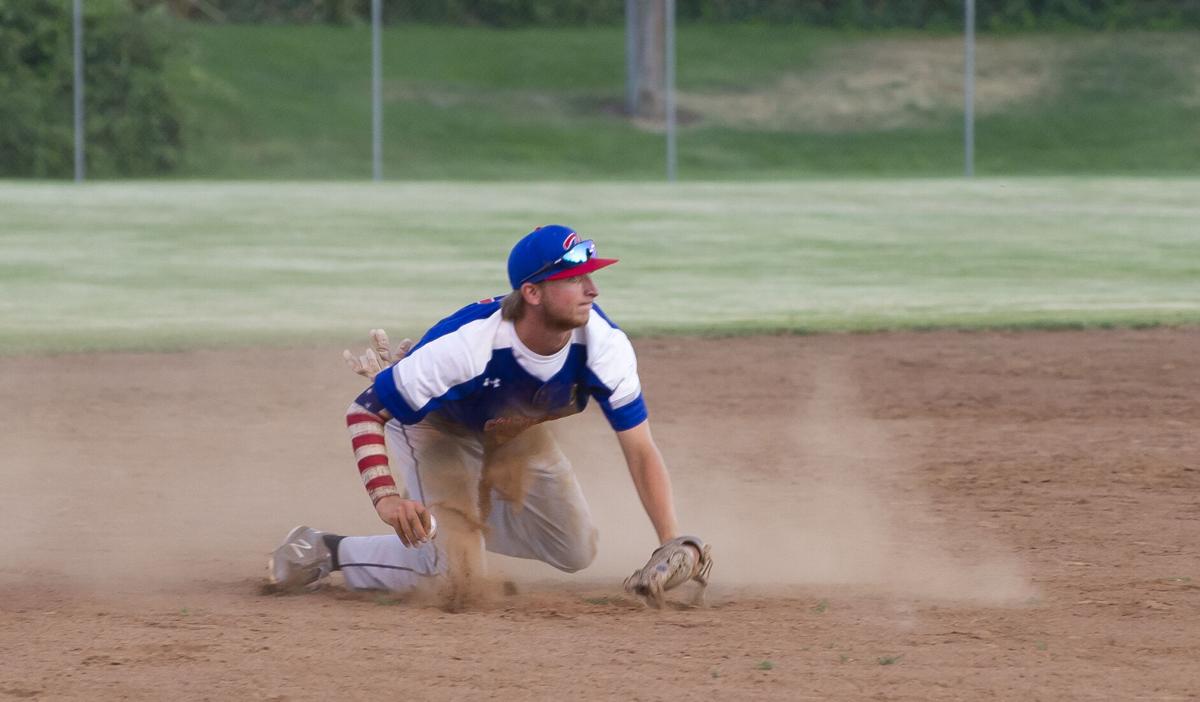 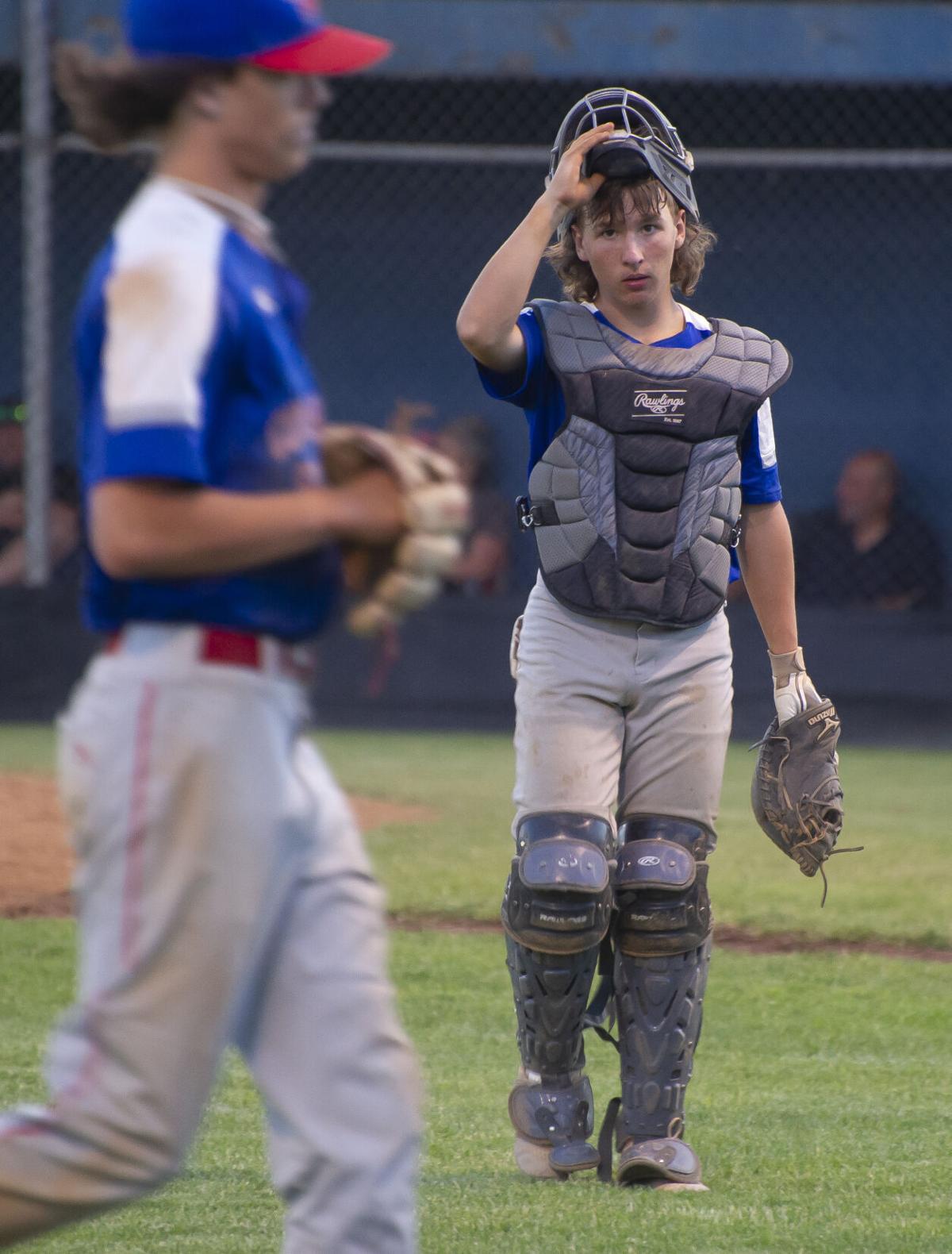 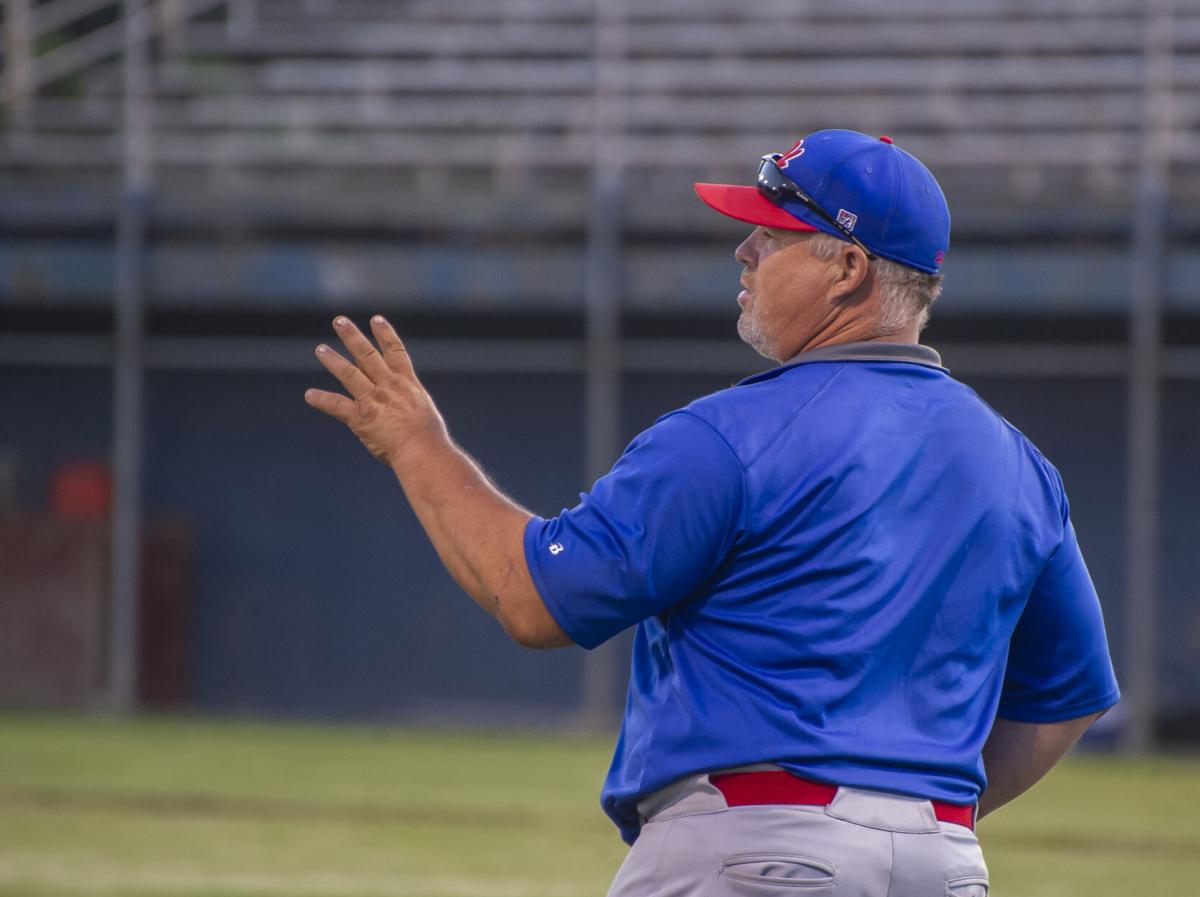 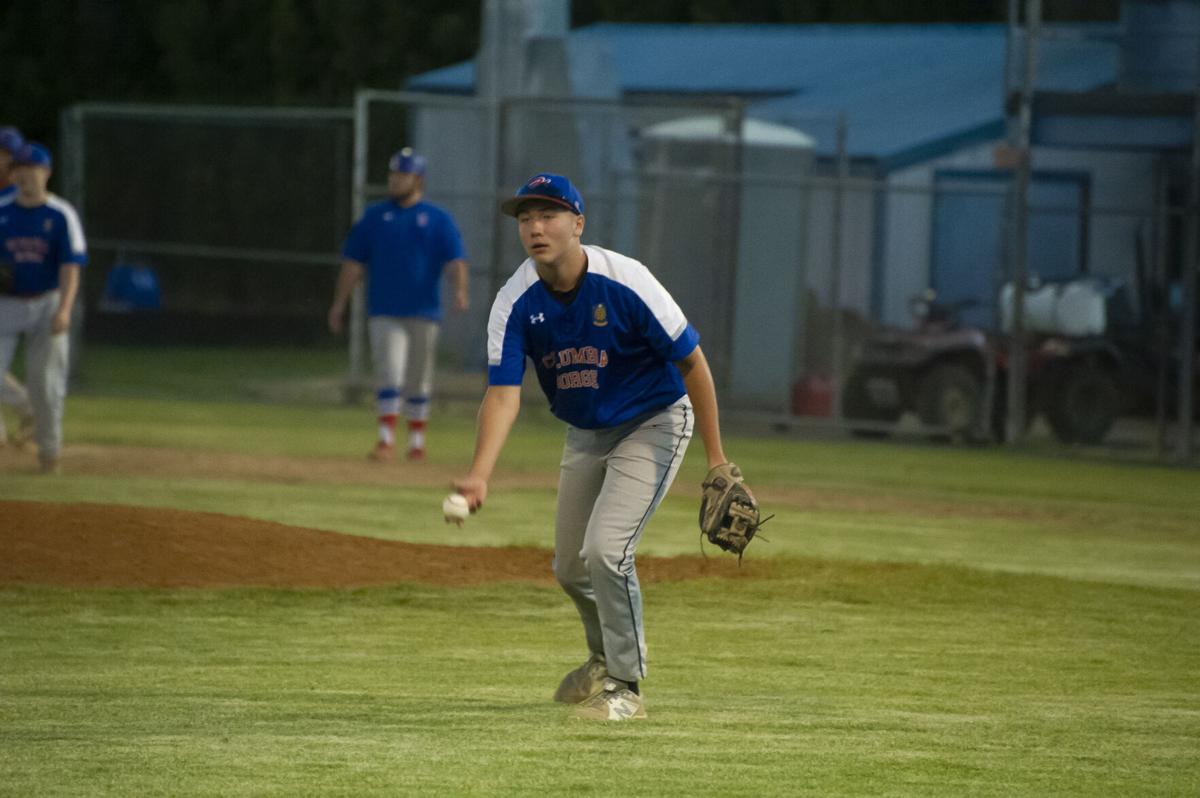 Gorge Hustlers play the second game of a double header at Quinton Ball Park in The Dalles Friday, July 16, 2021. #14 Nolan Donivan, Second Base

Gorge Hustlers play the second game of a double header at Quinton Ball Park in The Dalles Friday, July 16, 2021. #14 Nolan Donivan, Second Base

It has been a fantastic summer for the Hattenhauer Distributing sponsored Columbia Gorge Hustlers American Legion baseball team. The Hustlers (18-9) had a fabulous week, winning five straight, capped by an 8-0 shutout over Westview Saturday at Westview High School in Portland.

The Hustlers, guided by Coach Steve Sugg, resumed their schedule Tuesday at home versus Aloha (results came after the printed edition deadline). The Hustlers face Roosevelt/Northside in their next contest today in a 5 p.m. doubleheader at Quinton Street Ballpark in The Dalles, followed by a 5 p.m. home doubleheader Thursday against Hillsboro.

“It’s been a good summer; the season is going pretty good and we’re in first place in our league,” said Sugg. “We won the Pendleton tournament (June 25-27) while playing against some real good teams. We went to Spokane (July 2-3) and we went 3-1 in a tournament, and we almost made it to the championship game there. If we win our league, then we’ll go to the state playoffs and that’s our goal.”

In the first game of the July 17 doubleheader versus Westview, Hustler ace starting pitcher Isaac Anthony combined with reliever Riley Brock for a no-hitter. Anthony, a Dufur High incoming senior, helped lead the Hustlers to victory, as he had 17 strikeouts in six innings pitched. Brock, a The Dalles High incoming junior, pitched the seventh inning and had one strikeout to help contribute to the shutout — the second this season for the team.

Following two scoreless innings, the Hustlers scored three runs in the third to grab the lead and they added one in the fourth and two more in the fifth for a 6-0 advantage. They extended it to 8-0 in the sixth for the final margin. The quartet of Wade Fields, Hunter Hough, Gabe Petroff and Brock each had two hits and two RBI to lead the Hustlers’ 11-hit offense. Fields and Cameron Groves both had a stolen base.

The Hustlers’ momentum continued against Westview in a seesaw Game 2 that included three lead changes. The Hustlers were on top 5-4 in the seventh inning and appeared to be on the verge of a doubleheader sweep. But Westview overcame the deficit, scoring twice in the bottom of the seventh for a 6-5 win, snapping the Hustler win streak.

Anthony (2-for-4, RBI) and Petroff (2-for-3, RBI) led the offense for the Hustlers, who outhit Westview 9-7. The trio of pitchers Brock, Sam Shaver and Hough combined for eight strikeouts and five walks.

The Hustlers started the week with a July 12 doubleheader home sweep, winning 14-11 and 10-3, over the Gladstone Gladiators, to snap five-game losing streak. In Game 1, Anthony and Braden Schwartz led the offense as they both had three hits and three RBI. The Hustlers overcame a 4-0 first inning deficit by scoring five runs in the bottom of the first and adding three in the second for an 8-4 lead which they wouldn’t relinquish.

In Game 2, the Hustlers took a 2-1 first-inning lead and then scored in four consecutive frames to build a 10-1 fourth-inning lead. Gladstone added two in the fifth for the final 10-3 margin. The Hustlers’ offense continued to shine, as they outhit Gladstone 10-2. Nolan Donivan led the offense with three hits and two RBI. Hustler starting pitcher Sam Shaver had a strong performance on the mound with 10 strikeouts.

In a July 16 home doubleheader, the Hustlers got revenge against the Pepsi-sponsored Yakima Beetles (20-23), who won a doubleheader matchup between the two teams June 29 at Yakima. Starting pitcher Schwartz threw a two-hitter with a season-high eight strikeouts and he hit a two-run homer to help lead the Hustlers to a 15-0 Game 1 win.

“That was the best game that I’ve pitched this year and it was nice to get my first home run too,” said Schwartz, a The Dalles High incoming junior. “We won the Pendleton tournament and we played pretty good at a tournament in Spokane, and we won three-out-of-four games there, so we’re having a very good season.

“We’re having lots of fun for sure and we’re hoping to win our league and then achieve our goal to qualify for the state playoffs. It was nice to beat Yakima, especially after losing to them earlier this season. Ben Schanno did a nice job pitching to help us win the second game. He had a pretty good finish and he closed it out nice.”

The Hustlers, who outhit Yakima 14-2, were led offensively by Anthony (three hits), Hough (three hits, two RBI), and Donivan (RBI). The 15 runs scored marked the highest total for a Hustler home game this season and their second highest overall. The Hustlers beat Bend 19-2 in their June 12 season-opener.

“Schwartz pitched really good in the first game; he’s showing improvement in every game and he’s just getting better and better,” said Sugg. “It was good to see Schanno pitch really well in the second game and Isaac is pitching very well, too.”

Game 2 looked like it might be a repeat of the first game, as the Hustlers jumped in front 6-0 early, led by starting pitcher Garrett Peters (five strikeouts). After Yakima trimmed the margin to 6-3 in the second, the Hustlers answered with three runs to go up 9-3 after two innings.

The Hustlers’ three-run third was highlighted by an RBI triple by Fields. Yakima rallied, trimming the margin to 12-10 after five. Austin Neil scored on a passed ball in the sixth to put the Hustlers in front 13-10. The Beetles then got a run in the top of the seventh and had two baserunners and the go-ahead run at the plate. Relief pitcher Schanno (three strikeouts) had a strong performance in the last two frames on the mound, as he struck out the final batter to help preserve the victory.

The regular season concludes with three consecutive home doubleheaders, including a 1 p.m. July 24 contest versus Madison of Portland, followed by a 1 p.m. July 25 season finale against Sunset. Both games will be at Dufur City Park. The Hustlers are hoping to qualify for the American Legion state playoffs next week.