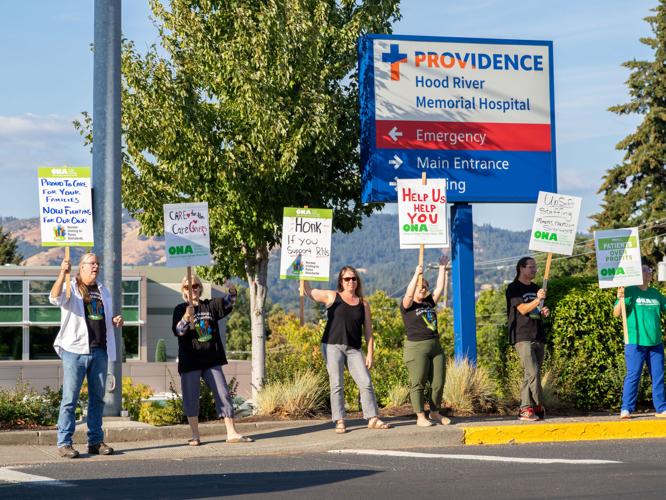 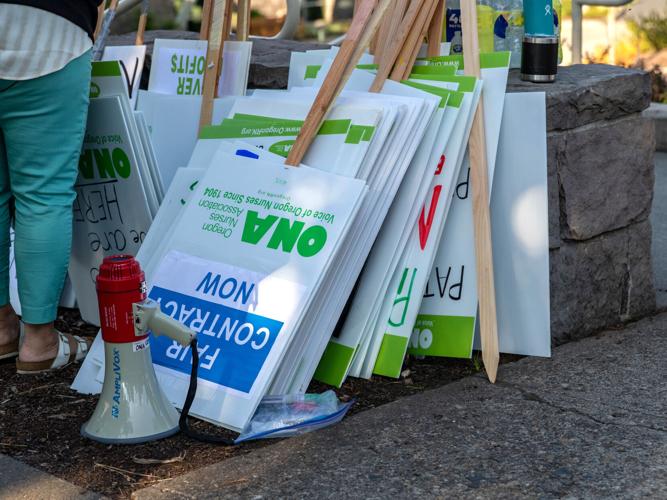 Signs were available for anyone who showed up to the informational picket held by ONA members and residents of Hood River on Sept. 15. 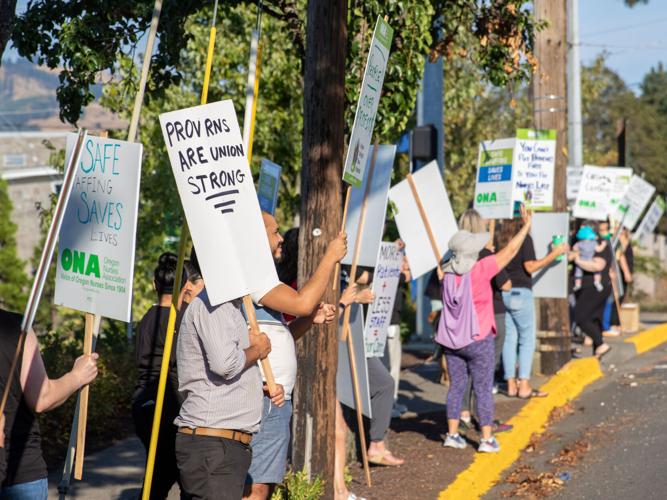 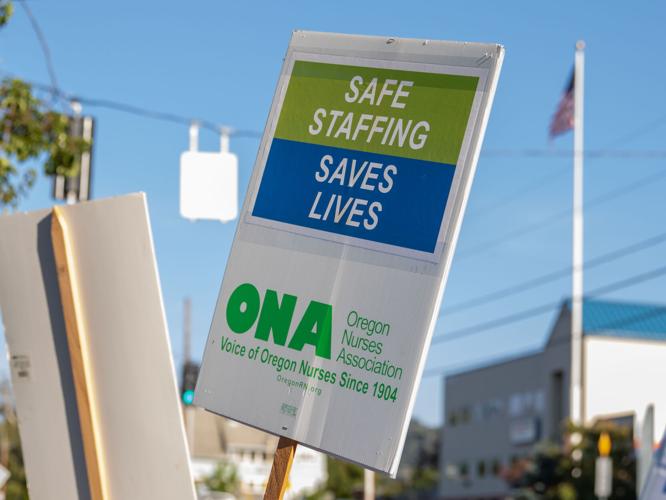 Signs were available for anyone who showed up to the informational picket held by ONA members and residents of Hood River on Sept. 15.

HOOD RIVER — Nurses who work at Providence Hood River Memorial Hospital were joined by members of the Oregon Nursing Association (ONA) during an “informational picket” in front of Providence Hood River on Thursday, Sept. 15. Labor representatives, current and former nurses and residents stood at the intersection of 12th and May Street  with signs in support of ONA members during ongoing union negotiations with Providence.

Nurses at Providence Hood River Memorial Hospital have been working without a contract since March and have been in negotiations for eight months.

According to ONA, nurses are still negotiating to address low staffing numbers and unsafe working conditions.

In attendance of the demonstration was Timothy Welp, a labor representative for ONA during the ongoing negotiations. Welp said there has been considerable progress made, but there is still work to be done. “We have reached agreement on two-thirds of proposals,” said Welp. “But there are about nine proposals that we have not yet reached agreement on,” he said. “Specifically, we need to close the economic gap between (Providence Hood River) and other hospitals in the area.”

He added that they have found common ground in regards to staffing concerns, but discussions moving forward will be centered on economic issues and length of contract.

Brittany Foss is a nurse on the medical surgical floor at Providence Hood River and the co-chair for the bargaining team. She said her biggest concern is the lack of staffing. “We come to work every shift understaffed, and do the best that we can to get by and keep everyone safe,” said Foss. “It’s demoralizing when you can’t provide the care you know your patients deserve.”

In a statement to Columbia Gorge News, Providence Hood River said, “Providence Hood River has been bargaining with ONA for the past eight months. In these 12 sessions, many topics have been tentatively agreed upon. An informational picket, planned by ONA on Sept. 15, is sadly disrupting to this work to find common ground. We have offered to bring in a federal mediator, but ONA has been unwilling to agree to that in Hood River. Federal mediators were successful in helping reach agreements at Providence St. Vincent and Providence Willamette Falls. Over the years, there has always been a way to come to agreement and we believe we solve more by talking than by walking.”

Welp said he thinks there is no need to involve a federal mediator. “We don’t think it made sense to bring in a mediator when we are already being productive,” Welp said in response to Providence Hood River’s statement.

The two sides met again on Sept. 16, still without an agreement. After 15 hours of negotiations the parties ended talks with little progress to show for it.

ONA nurses are looking for appropriate staffing for critical shifts, back pay for nurses working without a contract and providing a compensation package that allows the hospital to recruit and retain the skilled nurses.

In a statement to the News, the ONA said, “Nurses will continue organizing and advocating for our patients, our coworkers and our community’s health and safety. We call on Providence’s corporate management to reconsider and return to the table to reach a fair agreement which addresses unsafe staffing, safety standards and community health needs in Hood River and our surrounding communities.”