Styles, and prices, have changed  a lot since 1910.  The Chalmers-Detroit “Cadillac Thirty” pictured above, was $1,875, a lot of money at the time. But it had all the extras, like a top, glass front, magneto, gas and oil lamps, a horn and tools. 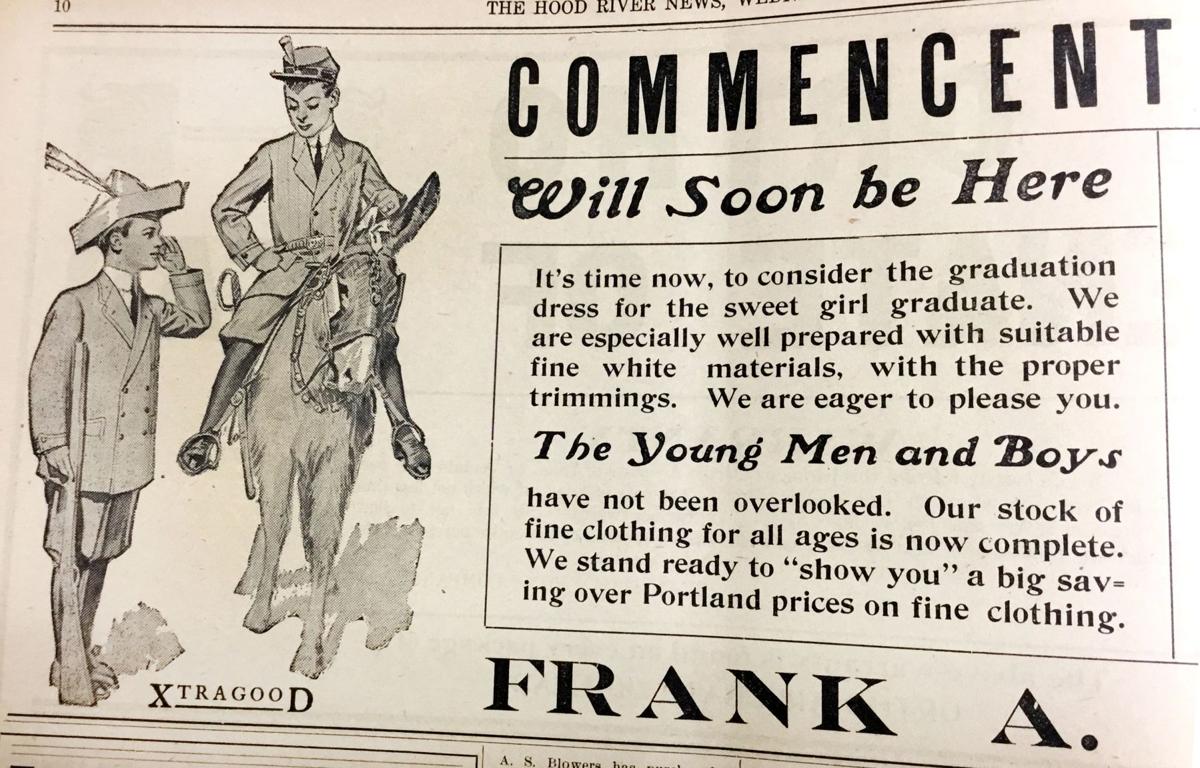 With high school graduation fast approaching, teenage boys could look their best with a (literal) feather in their cap with suits suitable for riding...all at “big savings over Portland prices on fine clothing.” 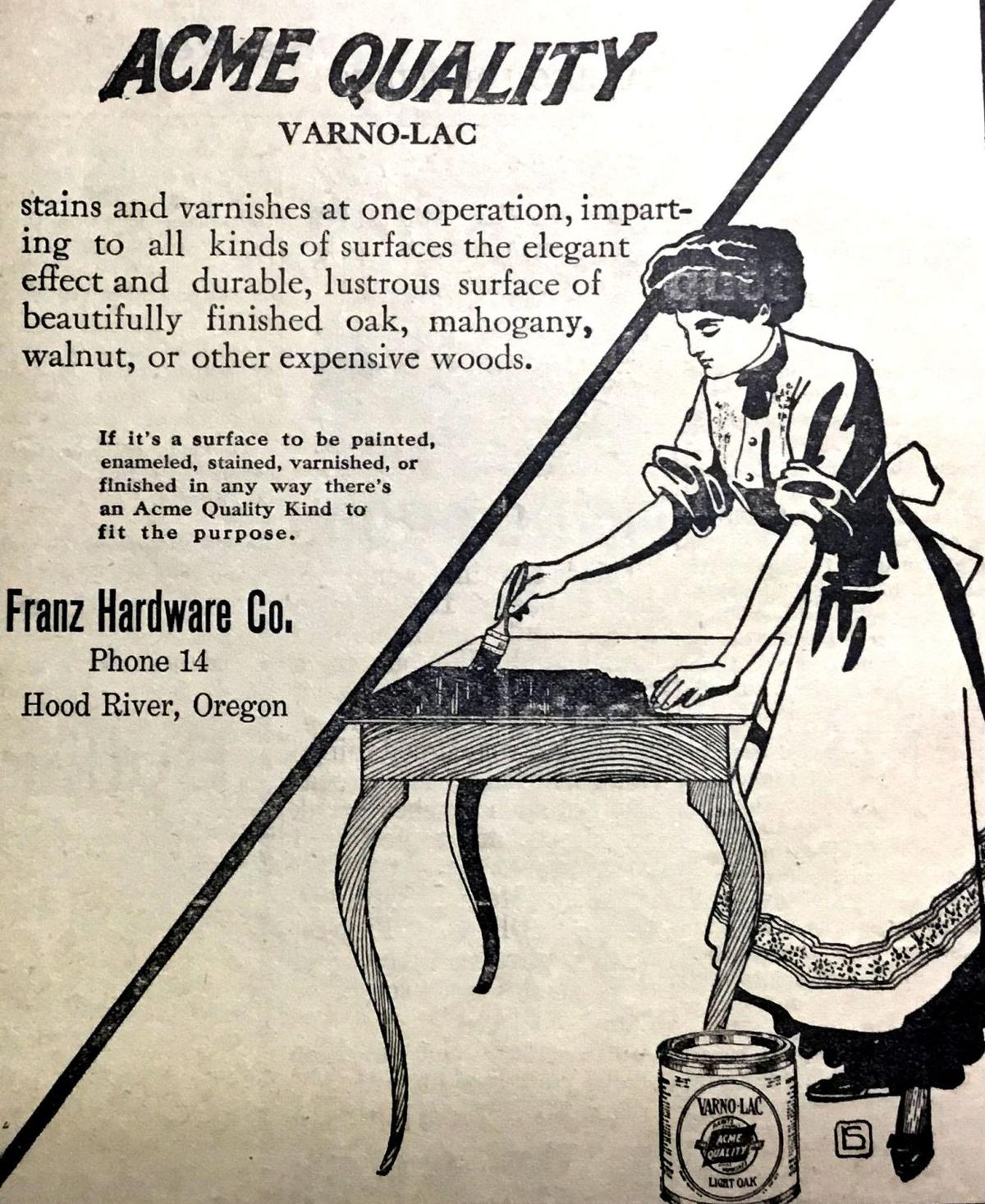 And creating a fresh look for the sitting room tables was easy with “ACME QUALITY” Varno-Lac, which stained and varnished in one operation for a superlative finish.

Styles, and prices, have changed  a lot since 1910.  The Chalmers-Detroit “Cadillac Thirty” pictured above, was $1,875, a lot of money at the time. But it had all the extras, like a top, glass front, magneto, gas and oil lamps, a horn and tools.

With high school graduation fast approaching, teenage boys could look their best with a (literal) feather in their cap with suits suitable for riding...all at “big savings over Portland prices on fine clothing.”

And creating a fresh look for the sitting room tables was easy with “ACME QUALITY” Varno-Lac, which stained and varnished in one operation for a superlative finish.

If you want to lose 20 pounds, you can always go to Antarctica for the winter. That’s what Jeff Pricher did. Pricher, 24, has worked for several years in the Hood River Fire Department as a paramedic and firefighter. When he and fellow Hood River resident Matt Johnston heard that McMurdo Station in Antarctica  was hiring firefighters for the winter season (the summer season here), they decided to apply.

A turnaround has started changing a volatile situation into a harmonious one in a local rent strike case that resulted in a lawsuit over alleged shortcomings at the Queens Heights Apartments in Hood River. Some residents of the federally-subsidized housing project formed an association to object to certain conditions they claimed should be corrected, and they place their rent in escrow to force action. No the same association reports the situation has changed markedly.

The Dalles has a new traffic code fixing almost every conceivable pedestrian, bicycle and other vehicle situation. The local rules were made to conform to rulings by the U.S. Ninth Circuit Court of Appeals.

A graduation ceremony will take place at 1 p.m. Friday in The Dalles, but the class won’t be wearing academic caps and gowns. Participants will be a class of RISE students which includes six women from Hood River. For six weeks the group of women has been engaged in pre-employment training conducted by the Cooperative Extension Service of Oregon State University. They are now ready for vocational training, or to accept employment. The group called “Reach independence through Self-Employment” (RISE) has been working with the cooperation of the public welfare commission.

Plans for reception of officers and crew of the USS Edmonds, Navy destroyer escort, first visit of a naval vessel to The Dalles over the 27-foot seaway to be opened to commerce in June, were completed this week during a visit here of Naval officers and pilots.

Hail and snow, together with heavy rain from last Sunday on, have not been any too welcome to fruit growers, but, so far as can be learned, little or no damage has been done by the hail, which fell Sunday afternoon in several sections of the valley, and repeated Tuesday.

Rain and snow in plenty since last Sunday have hindered maintenance work on Forest roads in this county (Hood River). Tuesday, 1.12 inches of rain was recorded at the Parkdale ranger station, and new snow covered all the higher foothills down to the 3,500 foot level. The Cooper’s Spur road is still closed by snow at the three-mile post in from the Junction.

One by one, the events promised for this spring are being canceled, owing to the slow progress on the highway west of Hood River. The Blossom Festival, which was such a decided success last year, and which was expected to be an annual event, was canceled by the Commercial Club this week, and the members of the Portland Ad Club, who were to have been the guests of this valley, have been notified that owing to the condition of the Columbia Highway and the hardship travel over it may work on tires, it was thought to be advisable to cancel the event and to wait and see what next year brings forth.

To the Editor:—The discussions, both pro and con, concerning the unification of the schools of Hood River have failed to bring out all that may be said on either side of the question. Transportation seems to have come in for more than its share in the discussion.

Realizing the importance of providing help to strawberry growers and orchardmen the Apple Growers Union has authorized the establishment of a labor bureau in connection with the union as soon as possible.

Lloyd Catterlin census enumerator for the center precinct requests the News to say that he is anxious to secure a full count for Hood River and asks anyone living in this precinct who is not enumerated by Wednesday May 11 to telephone to the News office and he will see that they are.

A.L. Newton receives the honors this year for showing the first ripe berries, having brought several fine specimens into the News office Monday. Mr. Newton was but a few moments ahead of C.A. Shurte of White Salmon, who brought in a half dozen fine berries for examination.

What’s Happening, week of May 3