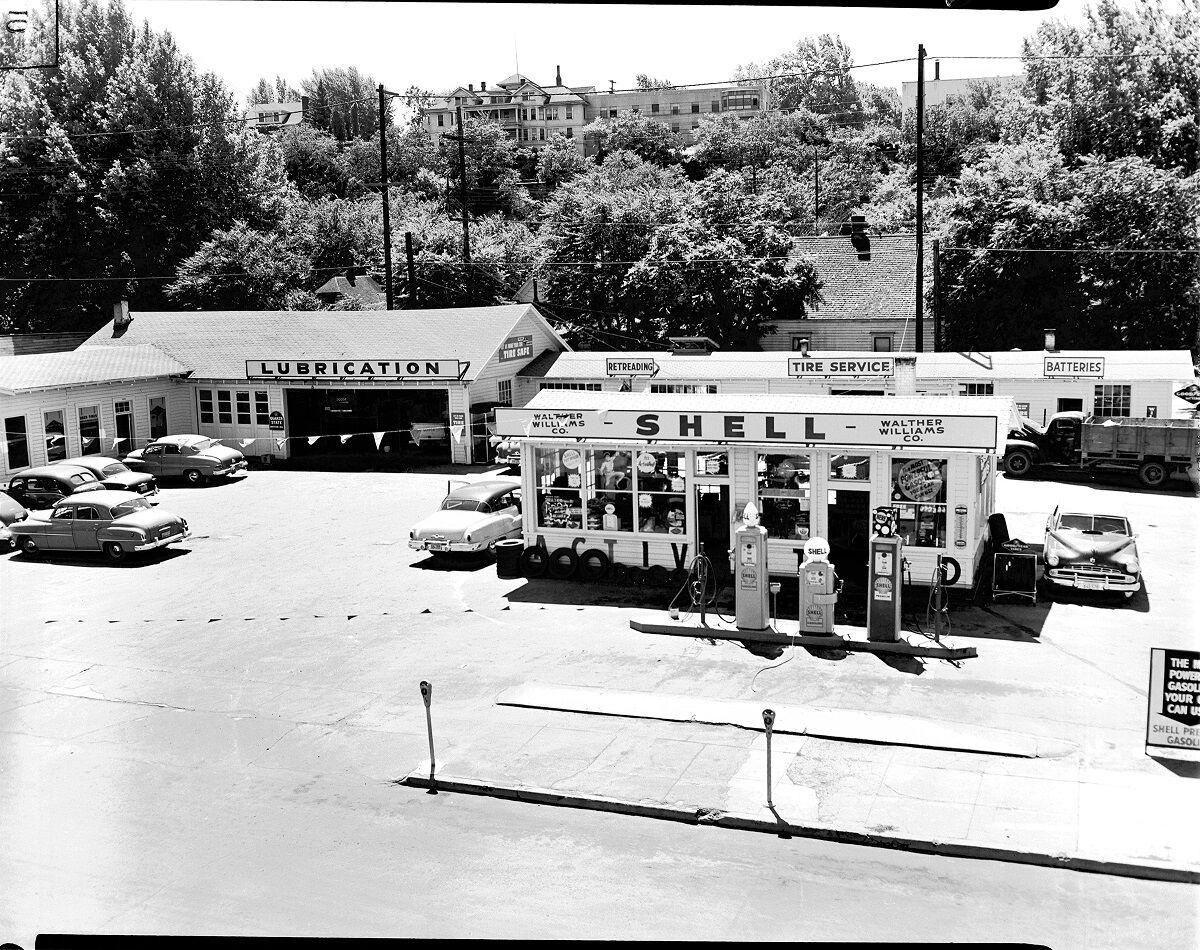 The Walther-Williams Shell station, located on the southeast corner of E. Third and Federal streets, photographed in 1951. Image scanned from a 4-by5-inch negative. In 1921, water at the station was found to be much improved by chlorination (See Yesteryears, below). 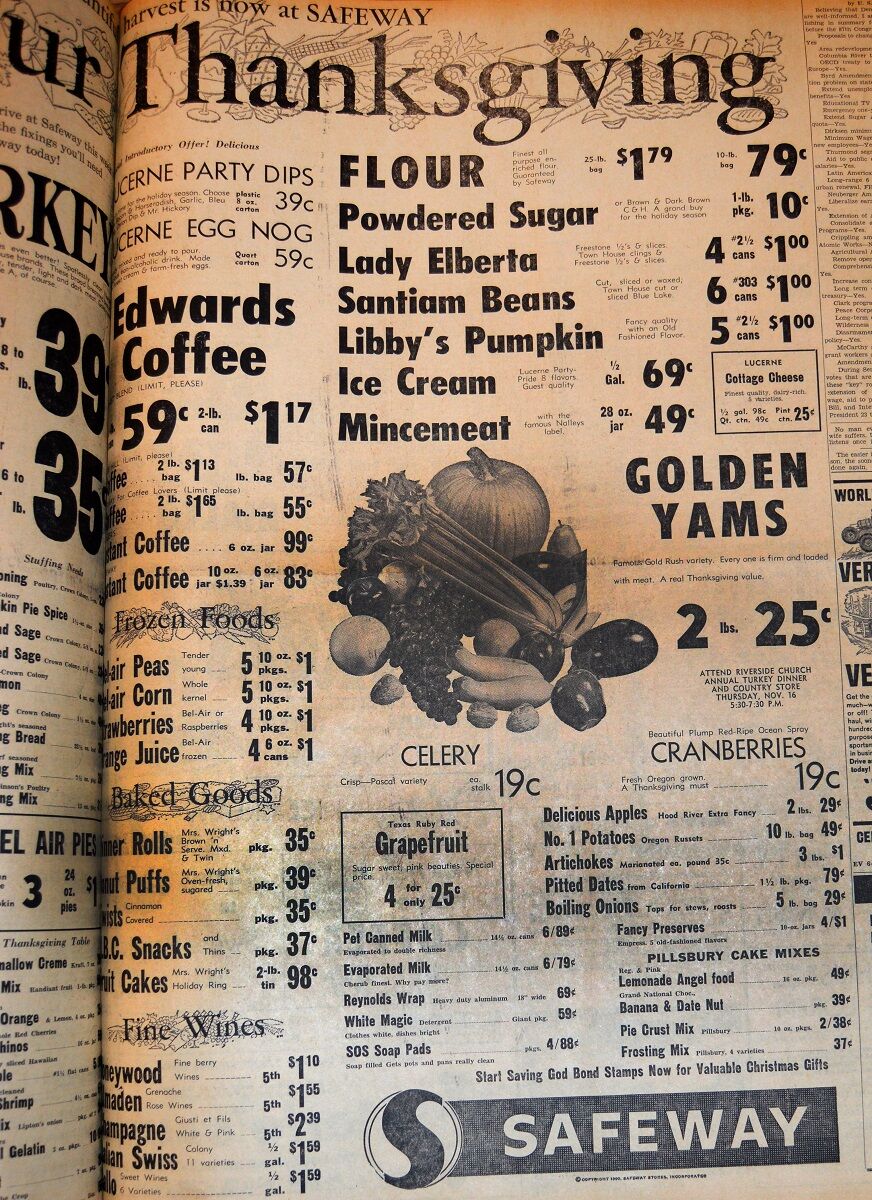 Part of the Thanksgiving ad that appeared in the Nov. 9, 1961, Hood River News for Safeway.

William Beeks, ranch foreman for Dr. H.H. Hartley, lying on his back in a quaking-aspen thicket with an enraged, wounded bear ready to pounce on him, probably owes his life, or at least his escape from being mangled, to a large black shepherd dog, says the White Salmon Enterprise. The encounter with the bear happened in a mountain pasture belonging to Dr. Hartley in the Simcoe mountains, 12 miles north of Goldendale, and followed an attack made by the bear on a band of sheep that had just been brought in to bedding ground. — Hood River News

The chlorinated water now being supplied through the mains of the city, comes within the requirements of the state board of health as regards to bacteria and colon bacilli, according to a report of tests received at the office of the city water commission. Four samples of chlorinated water were sent to the state board of health on Nov. 2 by the water commission for analysis. One sample was taken from the lower city reservoir; another from the upper reservoir, another from the basement tap in the city hall and the fourth from the Walther-Williams service station at the corner of Third and Federal streets. — The Dalles Daily Chronicle

“Nobody engaged in a small business in a non-defense town knows what is coming” was the opening remark in an address given before Hood River Rotary Club at the Columbia Gorge Hotel Thursday last week by George L. Jubitz, of the Franz Hardware. “During the past six months, there have been sharp rises in prices of some goods, while there has been a depreciation in quality of some other items. Not all of the price rises are readily understandable, to either retailer or the consumer, but there is little to do about it if the demand is to be met.” — Hood River News

The Dalles and Wasco county war veterans who saw their buddies fall on the battlefields of France so that liberty and peace might be preserved for their fellow countrymen, will celebrate Armistice Day, 1941, here tomorrow amid a world-wide setting which is as ironical as it is paradoxical. For when the American Legion’s traditional memorial program gets under way at the Granada Theater Tuesday morning it will be attended by an American public which must view with growing alarm another conflict which threatens to engulf all the far-flung reaches of the globe. — The Dalles Daily Chronicle

A nine-man committee is passing out copies of a brand-new way to run Hood River County government this week. They hope the county will vote it, or a revision of it, into existence next May as the first “home rule” charter in the State of Oregon. The charter would completely overhaul the traditional form of county government as it now exists under direction of the state constitution. Abolished would be the three-man county court that makes each commissioner bot a legislator of county laws and an administrator of those laws, instead, the charter calls for a seven-member board, elected by popular vote. — Hood River News

After walking more than 10 miles, William Neary Jr. of The Dalles, object of a search in the Mt. Hood National Forest area, was picked up by a logging truck and brought home Friday afternoon. Traveling through foot-deep snow, Neary’s car finally could navigate no further as he traveled forest roads in search of elk. His car stalled on the upper Fifteen Mile Creek bridge, unable to go forward or turn around. Neary spent the night in the car, then started walking toward Friend, 15 miles away. — The Dalles Daily Chronicle

One of the best basketball shows around is coming to Hood River Valley High Friday, Nov. 20 in the form of the Harlem Clowns. The Clowns, being brought to Hood River by the high school basketball team as a fundraiser, are an offspring of the world-renowned Harlem Globetrotters, and the Clowns have their own brand of fancy trickery and comedy that is guaranteed to delight everyone. — Hood River News

Klickitat County public utility district commissioners spent much of Tuesday afternoon and evening going over details on the county’s part in plans to mothball Washington Public Power Supply System plants four and five and its effects on county ratepayers. The commissioners gave final approval of the local PUD’s involvement in the “extended construction delay” and also heard a recommendation from PUD manager John Budd for a rate increase of about 15% effective from August 1982-84 to finance PUD’s part.— White Salmon Enterprise

Traffic noise could not dilute the spirit of Wednesday’s flag dedication at one of Hood River’s busiest corners. About 60 people gathered at 12th and May streets as a new American flag was raised, replacing the huge banner that was stolen from the site in mid-September. Cubmaster Mitch Hicks said 11-year-old Scout Jesse Schull “took the leadership” in Pack 798’s efforts to raise $500 to buy a new flag. — Hood River News

The city is cracking down on cracked sidewalks — and other sidewalk problems that might present a tripping hazard. If property owners do not make repairs, the city could do it for them, and then place a lien on the property. — The Dalles Chronicle

Merlin Vezina’s request to annex approximately 50 acres of his property into White Salmon has been withdrawn, following push-back from city officials. This marks the end of a second attempt for annexation — the first, with the City of Bingen, was met with hesitancy from councilors based on their concern that extensive development could stress the relatively steep slopes, possibly leading to heavy storm water runoff and landslides. Later, the City of White Salmon issued a “procedural stop action” to end further work on his property while his application was pending. — White Salmon Enterprise

Extended Thanks For Blackouts

Says Disappointment Not To Occur Again

Gov. Charles A. Sprague and Jerrold Owen, state Coordinator of Civil Defense, in the following letter to Penn C. Crum, chairman, Aircraft warning Service, Hood River County Defense Council, extend their thanks for the close cooperation which was featured in the total blackout exercises Friday night of last week.

“The long and lonely vigils of hundreds of observers at the posts you established in Hood River County during the Aircraft Warning maneuvers this past week were not rewarded with the number of flights we were promised by the Air Corps due chiefly to weather conditions beyond control. I realize the deep disappointment that many must feel and sympathize with those who may say ‘Never again.’

“Still, the Aircraft Warning System is vital to our national defense and must not be neglected. Major General Carlyle H. Wash, of the Second Interceptor Command, is cognizant of the situation and has promised that the disappointments will not be repeated. He plans another test next spring — if in the meantime war does not bring the system into active use. I hope your co-workers will continue their training and be ready for any emergency.

“Please extend to your observers my personal thanks for the sacrifices they are making and the service they are rendering the cause of national defense.

“Will you kindly advise your county chairman or coordinator of such criticism as you have to offer in connection with the Aircraft Warning exercise, so that it may be included in his official report, a copy of which will go to the Air Corps Commander and the national office of Civilian Defense.” — Nov. 7, 1941, Hood River News

Wrecked and abandoned vehicles accumulated over a long period soon will be removed under a cleanup campaign announced today by The Dalles City Manager C. Dean Smith.

City officials point out that abandoned or wrecked vehicles are “an attractive nuisance to children, and quite often a dangerous plaything.”

The cleanup campaign directed against derelict vehicles has the dual objective of eliminating a safety hazard and improving the appearance of city streets.

The city has begun putting owners on notice requiring removal of such vehicles.

“If you own such a vehicle please proceed to take care of the problem yourself,” Smith said, “or anticipate having official action taken in the near future.”

A call to the police department or the city manager’s office will bring action in cases where a neighborhood is plagued by a vehicle nuisance, he added. — Nov. 10, 1961, The Dalles Daily Chronicle

An armed holdup man robbed the Flying A service station at Cascade Locks of approximately $100 in currency at 3:25 a.m. today, tied up the attendant and then escaped.

Hood River County sheriff’s officers and state police searched the city and roads in the area without finding a trace of the two-toned car, believed to be a 1955 model Chevrolet, used by the gunman.

The car headed east after the holdup, and police set up a roadblock west of here. Hood River Sheriff R.L. Gillmouthe said a vehicle and driver answering the description given by the service attendant crossed the Bridge of the Gods from the Washington side to Cascade Locks at about 3 a.m.

The gunman is described as about five feet, eight inches tall and weighing about 170 pounds. He was dark complexioned, Gillmouthe said.

The sheriff said the attendant, whose name was not given, asked for gas and pulled a gun after the attendant had put about 10 gallons in the tank.

Holding a large automatic pistol, the gunman took the attendant to the back room, forced him to open the cash register, jerked the phone from the wall and tied up the service station man with the wire, Gillmouthe said. — Nov. 10, 1961, The Dalles Daily Chronicle

Irish Will Be Warned If Peace Parley Breaks