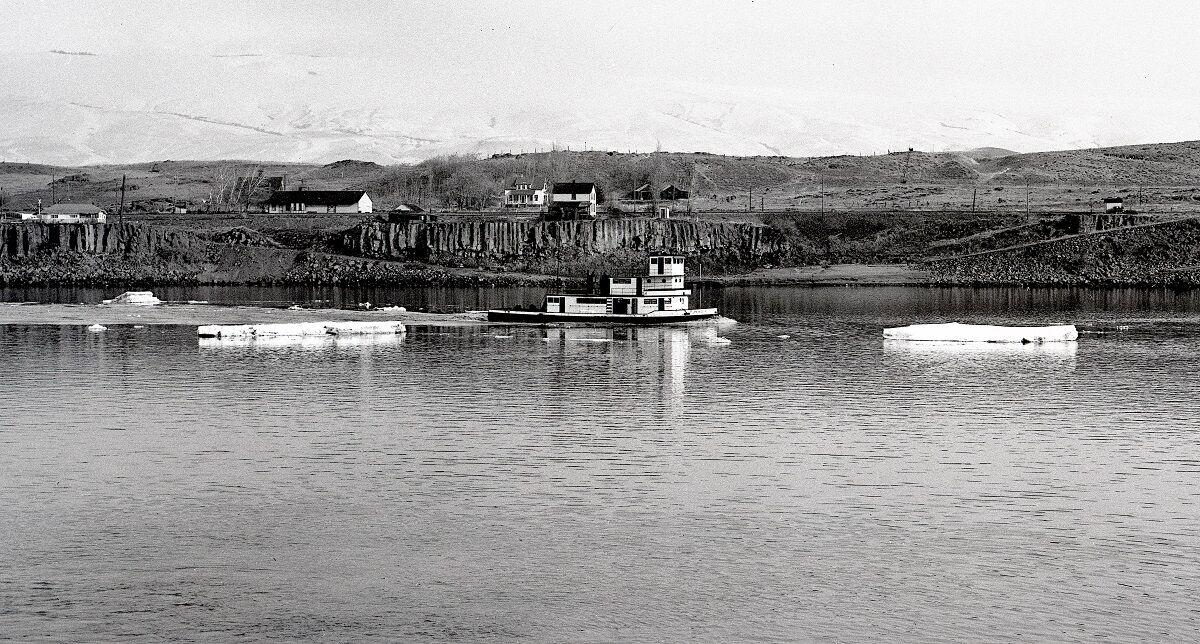 The tug “Invader” motors past a pair of icebergs floating in the Columbia River offshore from The Dalles in January 1949. 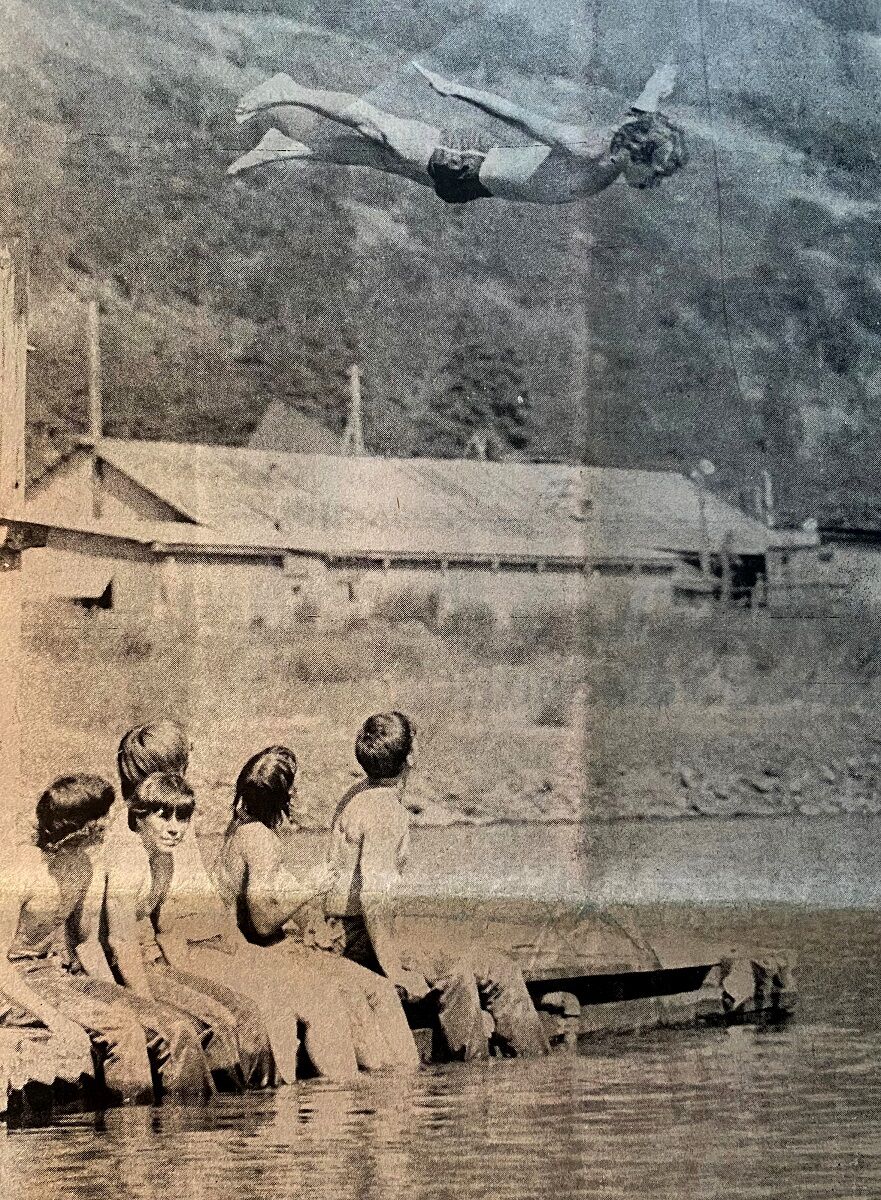 Mike Logan, 15, White Salmon, soars over some of his friends while diving off a piling at the Bingen Marina on Sunday. Watching the dive are Martin Odie, Dave Austin, John Schwinge, Dale Walker, and Jim Clemence, left to right. With the hot weekend weather, many boaters, swimmers, and sunbathers flocked to the marina. 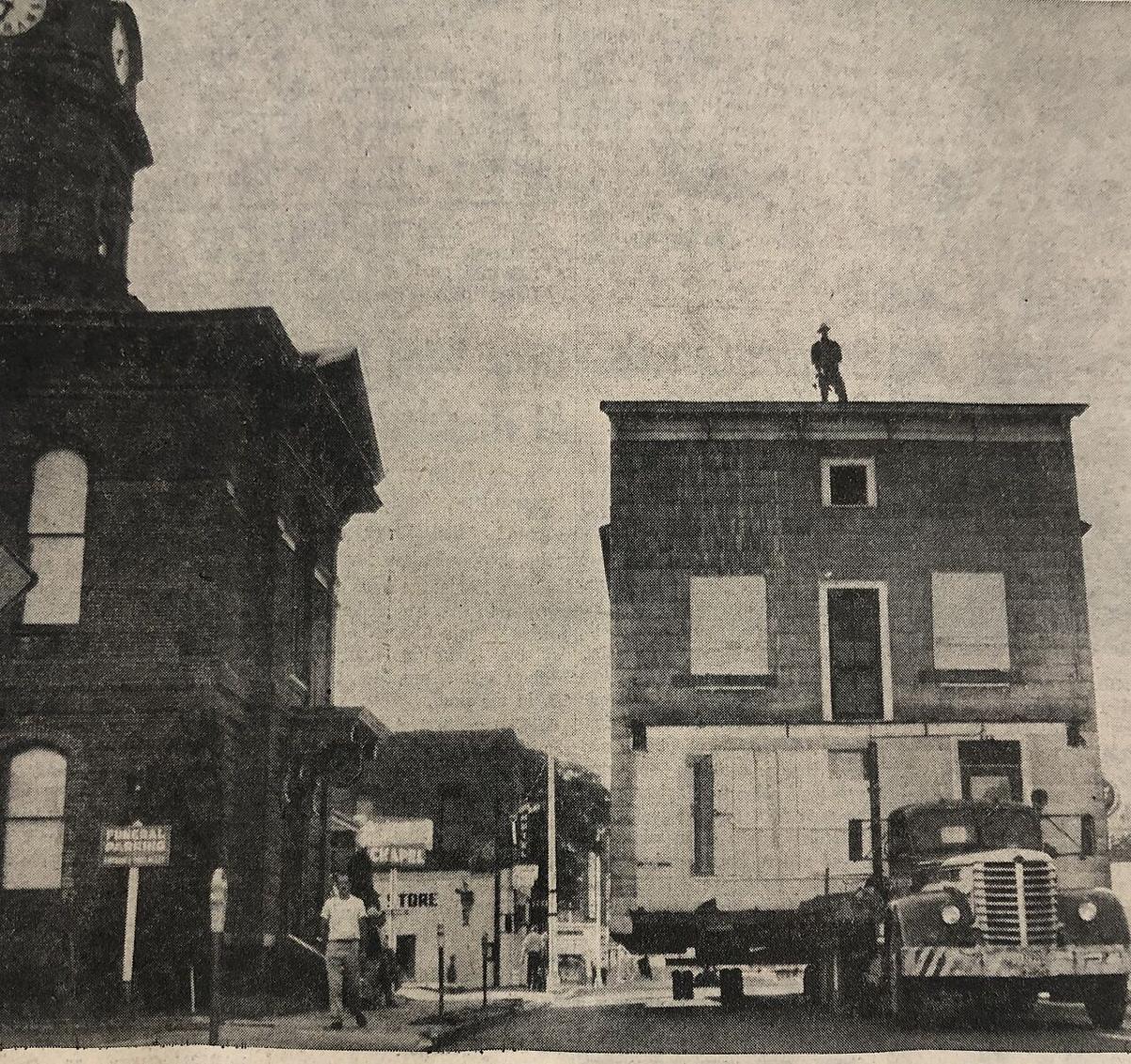 Rare Meeting — Two buildings that once served the same purpose at different times in Wasco County’s long history met through a rare set of circumstances early today. At left is the Masonic Temple and Smith Callaway Chapel, which from 1883 to 1914 served as county courthouse. At right is the county’s original courthouse, built in 1859. The smaller building was on its way west on Third Street to a new place of honor when it passed its successor and this picture was taken. The first county courthouse has been preserved by the Wasco County-The Dalles City Museum Commission and is slated for eventual restoration and use at the Lewis and Clark Memorial site on the Columbia River Highway just west of the city natatorium. 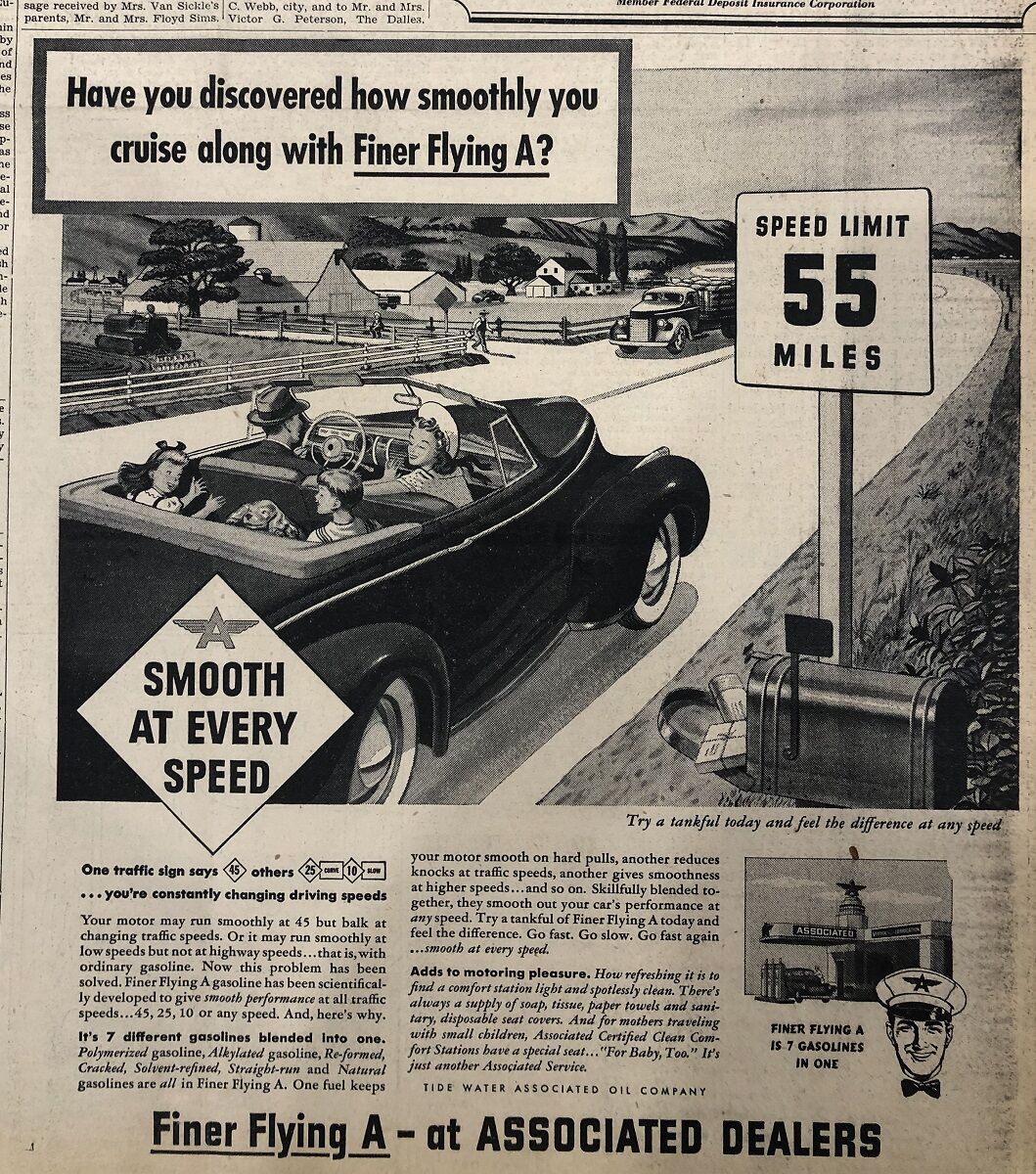 The fine weather of the 3rd and 4th brought out the campers and week-enders, and all day Sunday and Monday, there was a steady stream of travel over the Highway. One of the sports indulged in by passengers in autos was the counting of cars on trips up from Portland. One visitor to Hood River, who arrived here at 6 p.m. Monday evening, stated that between Sandy and Cascade Locks, she counted 738 cars. — Hood River News

A new system of supervision over road work in Wasco County will be inaugurated in the near future, which will result in 19 county road supervisors representing as many road districts losing their jobs, it was decided this morning by the county court. Under the new plan, supervision of all road work in the county will be centered under County Roadmaster P.W. Marx. — The Dalles Chronicle

If Senator Walgren, of Washington, has been correctly informed, there are prospects that Cascade Locks, at the western limits of Hood River County, may be in line for one of two aluminum plants to be built in the Grand Coulee-Bonneville area through the Office of Production Management to meet the shortage of aluminum which has developed through federal miscalculation. The other plant might be established at Spokane, according to Senator Walgren. Cascade Locks has a number of potential industrial sites and is located within a few miles of the great hydroelectric plant at Bonneville Dam. — Hood River News

Announcements that Ben Koch will pitch for Hood River against the original Negro Ghosts from Sioux City, Ia., tomorrow night and that the same traveling colored team will appear in The Dalles on Friday, July 11, have resulted in a revision of the current week’s city softball league schedule, it was reported here today. — The Dalles Chronicle

School District One meets in an historic first session next Wednesday, July 12. That’s the date when the old County Unit district that officially became Hood River School District One under the Reorganization Act, meets in its new form with a seven-man directorate. Major items of business for the board will be unscrambling complex bids to provide the district with one new school bus for the 1961-62 fiscal year. Bids were submitted at the last meeting of the County Unit district. — Hood River News

The dispute between the Associated General Contractors and the Hoisting and Portable Engineers Local 701 gained intensity today when pickets appeared at several Portland construction locations. — The Dalles Daily Chronicle

After months of hearings, work sessions and compromises, the Legislature has completed a reapportionment plan. If the plan survives court review and potential challenges, it will be the first time in 70 years that the Oregon Legislature has been able to accomplish the task. For Hood River residents, the apportionment plan passed last week doesn’t alter current representation. State Sen. Ken Jernstedt and state Rep. Wayne Fawbush, both of Hood River, continue to represent the area in the Legislature. — Hood River News

Wasco County Planning Commission members Monday night on a 3-2 vote approved a controversial recommendation to require water and power on subdivisions and major partitions prior to approving such projects. — The Dalles Chronicle

The proposed 120-foot sternwheeler, a joint venture of the ports of Skamania and Cascade Locks, moved a step closer to reality with approval of final plans for the vessel. Skamania County Port Manager Larry Hendrickson said he hopes the boat will be in operation by early next summer. The ports have been working for the past seven years on the project designed as a recreational attraction for tourists and sightseers. Although scheduling has not been worked out, Hendrickson said stops at Bingen Marina and Hood River are planned. He added the primary service areas will be on the Bonneville pool in the Stevenson and Cascade Locks areas. The vessel, designed as a replica of old-time Columbia River sternwheelers, would hold a minimum of 350 passengers, although it is not designed for overnight operations. The two ports will split operation and maintenance costs of the boat, estimated at $509,066 for 1982. The two ports operate the Columbia Sightseer and Hendrickson reported tours are doing very well this summer. — White Salmon Enterprise

The cool gusts of wind that blew through Jackson Park last Wednesday made the Gorge Winds Big Band’s job a little more difficult, as conductor Greg Weast’s score fluttered in the breeze. The hindrance was ironic, considering the group’s name. To the gathered crowd, though, the breeze was a breath of fresh air that made holiday events all the more pleasant. — Hood River News

Last October, John and Korina Huffman’s 30-year-old septic tank went kaput. They figured they’d get a city permit to replace it and be done with it. But eight months later, they are still without a permit, and have boards covering the open septic tank in their front yard. Also, they’ve earned the animosity of their neighbors while pursuing an alternative solution required by city staff, John Huffman told The Dalles City Council June 25. — The Dalles Chronicle

The U.S. Forest Service intended to issue a notice of decision next month on its development plans for the White Salmon River Launch Site at BZ Corner. A one-month public comment period on three alternative site plans ended June 18. The recreation-related issues to be decided by the Scenic Area manager include: The method or system for providing public access to the river; the level of construction on the nature trail to BZ Falls; public facilities to be constructed on site; the services to be provided. “It’s taken us longer than we anticipated,” said Scott Springer, wild and scenic manager for the Columbia River Gorge National Scenic Area. “A lot of recreationalists were hoping we’d get something in there fast and soon, but we have to comply with the laws of the nation before we can do anything.” First and foremost, the National Scenic Area manager’s decision must comply with the standards and guidelines of the Gifford Pinchot and Lower White Salmon Wild and Scenic River management plans, as well as Klickitat County land-use rules, and achieve an acceptable level of environmental impact. “We’re just trying to get some recreation development on site,” Springer said. — White Salmon Enterprise

The company recently issued a mandate that no “peroxide Blonde” be employed, charging that their lightheadedness stood for inefficiency. Girls were urged to drop the artificiality and return to “normalcy.”

The natural Swedish or German blonde was declared all right, being industrious, faithful and studious.

More than 90 percent of blondes and all girls with bobbed hair are virtually useless in the business world, Daniels declared. The ideal business woman is one who has had two or three years of college education, does not powder her nose, watch the clock, rouge or smoke cigarettes. Girls should dress neatly and attractively.

Of all types, long-haired brunettes are the best. — The Dalles Daily Chronicle, July 7, 1921

Police Thanked For Breaking In

The magic of electronic automobiles had Hood River visitor H.H. Walter looking for a can opener Monday — when Hood River policemen solved the case.

All the way from Arcada, Calif., came Mr. and Mrs. Walter, former residents, to attend the funeral services for friend Chester Walton. Parked downtown, Mr. Walter rolled up the windows of his Cadillac and promptly locked himself out.

He stayed that way until city policemen appeared with a “car cracking” kit, slipped a tool through a tiny opening against a window seal, flipped the pushbutton that let Mr. Walton back into his electric chariot and on his way home. — Hood River News, July 4, 1941

Heralded as a move to provide American citizens with their first real opportunity to share directly in the nation’s defense program, and to give moral support to men who have gone into army and navy service from homes and communities, is the United Service Organization drive for funds which formally gets under way in Wasco County tomorrow.

The drive has been in progress in other parts of the state and nation for the last three weeks but was deferred in this district until the Cherry harvest and the Fourth of July celebration had been completed. A total of $10,765,000 is the goal of the nation-wide campaign, Oregon’s quota being $86,000. Wasco county is being asked to provide $700. — The Dalles Daily Chronicle, July 7, 1941

Non-Partisans In Row Over Finances

U.S. May Make Trade With Nazis

Hoffa Preparing For Reign of Power