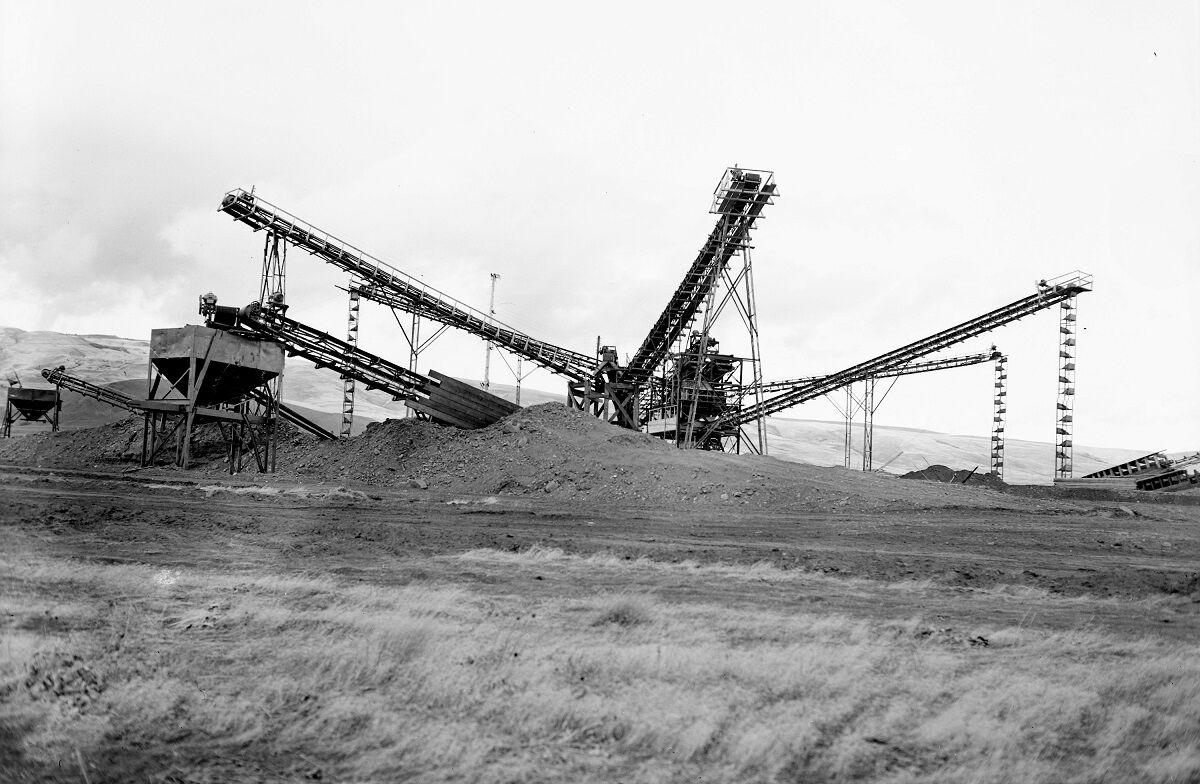 A sprawling sand and gravel plant sorts and prepares gravel and sand for use in the construction of The Dalles Dam on Nov. 1, 1953. Scanned from a 5-by 5-inch black and white negative. 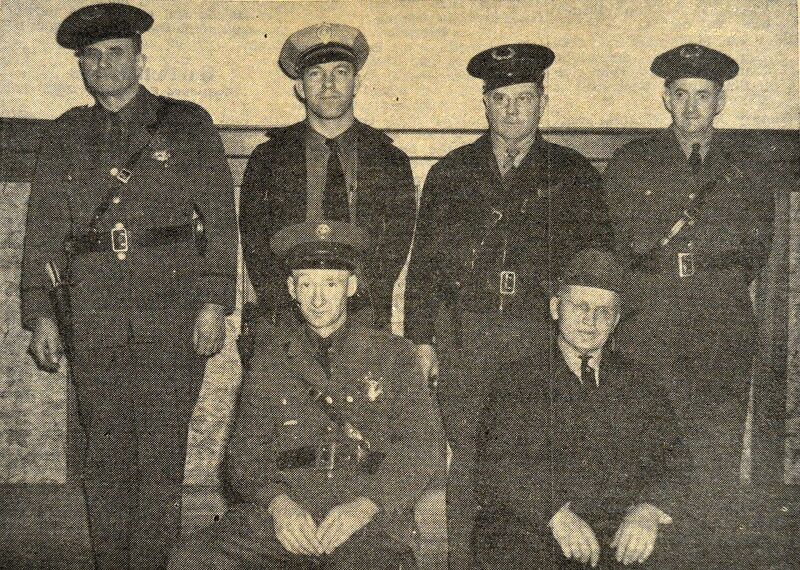 Hood River’s police force will be hosts to visiting policemen from practically every city in Oregon at the Columbia Gorge Hotel on Jan. 15. Left to right are officers Deane, Osburn, Ordway and Hollenbeck. Seated are Chief Sloat and Councilman Fletcher. H.F. Hollenbeck is in charge of the meeting. — Hood River News, Jan. 10, 1941 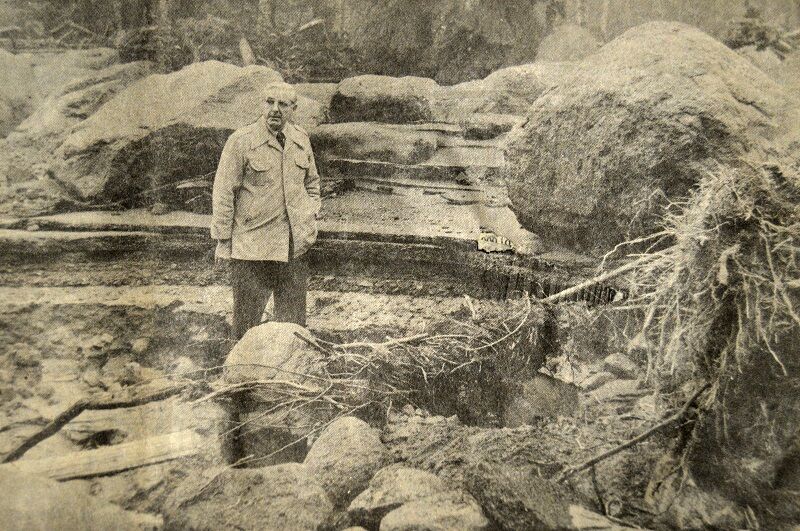 Oregon’s top executive and his party are shown taking a good look at the aftermath of Christmas on the East Fork of the Hood River. Gov. Vic Atiyeh waded through sand and water to reach a barely visible section of the destroyed Highway 35. Even as the governor observed the damage, heavy equipment was working at a fast pace in an effort to shape a makeshift bed for a temporary waterline. News staff photo. — Hood River News, Jan. 8, 1981

Local Elks to the number of about 125 are now planning on establishing their own lodge in Hood River, and a meeting to make the necessary arrangements will be held in the Commercial Club on Saturday evening. It is believed that, with a lodge here, there will be an opportunity to increase the membership to 400-500. If the plans of the leaders are successful, it is planned to eventually build an Elks temple here. At a preliminary meeting held Monday evening, at which about 35 guests were present, the plans were enthusiastically received. — Hood River News

SALEM — Sen. George E. Joseph of Portland today introduced before the senate a bill, providing that Gov. Olcott appoint a hydroelectric commission to investigate and report to the legislature of 1923 on the cost of constructing a power dam across the Columbia River at Celilo. The dam would include the locks and would raise the water level at Celilo so that the falls would be eliminated and there would be no impediment in the river except the locks. — The Dalles Daily Chronicle

Hood River Chamber of Commerce, through its new manager, R.E. Steele, at a meeting of the Mid-Columbia Chambers of Commerce, held at Cascade Locks Friday evening of last week, joined in the full chorus of disapproval incident to an announcement that many members at Bonneville Dam are to be transferred to the Portland office or allocated to other work, and the local chamber will play its part in every effort to have the order modified to the end that the community of Cascade Locks and other nearby centers are as little affected as possible, according to John N. Mohr, president of the Mid-Columbia Chamber group. — Hood River News

Chief Tommy Thompson, Henry Thompson and other members of the Celilo Indian Village plan to appear before the state legislature in the near future, when they will present problems concerning the fishing rights on the Columbia River, Spokesman John Whiz reported this morning. — The Dalles Daily Chronicle

Charter Study To Unfold At Parkdale Public Forum — After two weeks so quiet reflections over their tape recorded interviews with county of Hood River officials, the Hood River County Charter committee will present its first major review of what it has learned to a valley audience at the Parkdale Grange Jan. 16. Charter Chairman Karl Kment says the review will cover the branches of county government studied thus far in the committee’s long, careful look at all phases of local government. The committee, formed under the new county charter provisions set up by the 1957 legislative session, has set a two-year timetable for its work and has been holding hearings since late summer. — Hood River News

“Here’s your highway, Fred,” said Oregon Gov. Vic Atiyeh with an air of discovery. He pointed to a slab of rock-covered asphalt with a strip of white paint visible on one edge. It was a revelation that Fred Klaboe, director of the Highway of Transportation, didn’t seem particularly eager to acknowledge. But he took it with good nature and assured the governor he would “salvage” all of Highway 35 possible. The governor had scheduled a trip to observe damage caused by a Christmas night flood to Highway 35. He had already declared the area a disaster area, based on aerial photographs taken by the State Highway Division the day after the flood. — Hood River News

Size of the bond issue to be sought by School District 12 for the proposed new The Dalles Junior High School will be determined soon. At their meeting Thursday night, school directors authorized Supt. Dave Bates to assemble cost estimates for early consideration, possibly at a special meeting. — The Dalles Daily Chronicle

Two youths, accused of first degree murder and assault in the Dec. 29 ax death of one person and wounding of three others in Cloudville, had bail set at $50,000 each by Judge Ted Kolbaba in Klickitat County Court Jan. 8. The two pair of juvenile suspects made their first appearance in Superior Court after being arrested by several law enforcement agency representatives on first degree murder charges at Couldville Dec. 31. The three victims are being treated at Good Samaritan Hospital. — White Salmon Enterprise

The county’s law enforcement offices are being revamped to better meet security and space needs. Last week the Hood River County Commission gave the nod to enlarging the district attorney and juvenile departments. Those renovations will be added to prior approval for an expansion of the sheriff’s offices. Dean Guess, Parks and Building director, said the combined project will cost $200,000, a discounted price since almost all of the non-specialized labor will be done by the correction’s crew. — Hood River News

The Dalles school board put off its vote on a middle school student relocation plan for two weeks pending further feedback from the Relocation Advisory Committee. The board is undecided on what to do with district offices during the year the new middle school is under construction. — The Dalles Daily Chronicle

Kyle Richardson won’t be pulling any punches when he steps between the ropes Saturday for the first fight of his three-month-old amateur boxing career. The White Salmon resident, who turned 19 in November, has been in training since late last October. He travels to a Beaverton, Ore., gym three times a week for rigorous two-hour workouts under the guidance of West Portland Boxing Team coach Bill Meartz and manager Mike Morton. Richardson, who will fight as a junior middleweight (156 pounds) this weekend, weighed 174 when he first started boxing. He’s now down to a well-honed 153 pounds on a fit and trim 5-foot, 11-inch frame. “I’m excited because this is really something I want to do, but I’m nervous because I’m going to be watched by all these people,” Richardson noted. “I think everything will go well.” — White Salmon Enterprise

Special police officers, working under the state anti-saloon league, were unable to substantiate a single one of their charges against Chief of Police Frank Heater and other members of the local force, at a special meeting of the city council yesterday afternoon.

The charges in question grew out of the general raids on local hotels and ranches, staged Dec. 12 by the local sheriff’s office at the insistence of the state investigators. At that time the special operatives are said to have made charges to Mayor Stadelman that the local force was “one of the worst in the state” and that Chief of Police Heater and Patrolman McCLaskey had been seen drinking intoxicating liquor over the bar at the Glenwood hotel. It was also charged by the state policemen that Chief of Police Heater had seized about 40 gallons of whiskey from an automobile coming across the local ferry, never reporting this seizure and keeping the liquor.

All of these charges were denied by the local police, Heater demanding that the anti-saloon league detectives be brought back to The Dalles to prove their assertions.

At yesterday’s hearing Special Detectives Standifer and Russel, who had taken a leading part in the charges against local police, admitted before the council that virtually all of the evidence upon which they had based these charges were of a hearsay nature.

Standifer stated that E.W. Hollenbeck, later arrested on a charge of bootlegging in the general raid, had vouchsafed most of the information about Chief Heater securing the 40 gallons of whiskey and failing to report the same. George Anderson was also mentioned in connection with this charge.

At the motion of Mayor Stadelman, both of these men were called before the council. Both denied having ever made the statements credited to them by the special investigators. Neither would say positively that local police officials were cognizant of conditions found at the Glenwood hotel and other resorts raided.

That he considered the hearing a “vindication” of the local police force, was the statement of Mayor Stadelman, following the council meeting.

Dan Gilbert, driver, was seriously shocked and injured, and six passengers sustained injuries ranging from bruises to broken arms when the Union Pacific local bus which left The Dalles at 10:30 this morning for Portland skidded on hard packed snow on a high curve directly northeast of the Mark A. Mayer place 15 miles west of The Dalles, crashed through the guard rail, turned over three times and came to rest on its top 175 feet from the highway.

Those injured in addition to Gilbert included Florence Quick of this city, broken arm and bruises; Veva Cook of this city, bruises, head lacerations and injured shoulder; R.S. McRivett of Olympia, en route from Chicago, injured back; Marvin Ison of Hood River and Lewis J. Denny of The Dalles, severe bruises.

The crash of the bus as it hurtled down the steep embankment was heard by J.R, Wilcox, operator of the Mark A. Mayer ranch, who was alone at the time in the large house. Wilcox declared that had the bus not hit a large oak tree as it first went over the bank, pulling the tree out by the roots, the vehicle would have rolled much further. The tree checked the speed of the bus, but swerved it so that the worst of the impact fell on the front of the vehicle.

Gilbert’s shoe was caught in the clutch and brake levers, and it was necessary for him to take his foot out of the shoe in order to make his escape. He was badly bruised, suffered severe lacerations and was so badly shocked that he could not realize that all the passengers had been rescued, asking over and over again for some time after the wreck: “Are they all out? Are they all out?”

Great War Looked For In Spring

War Will End In Stalemate Unless U.S. Interves, Belief Of Newsmen