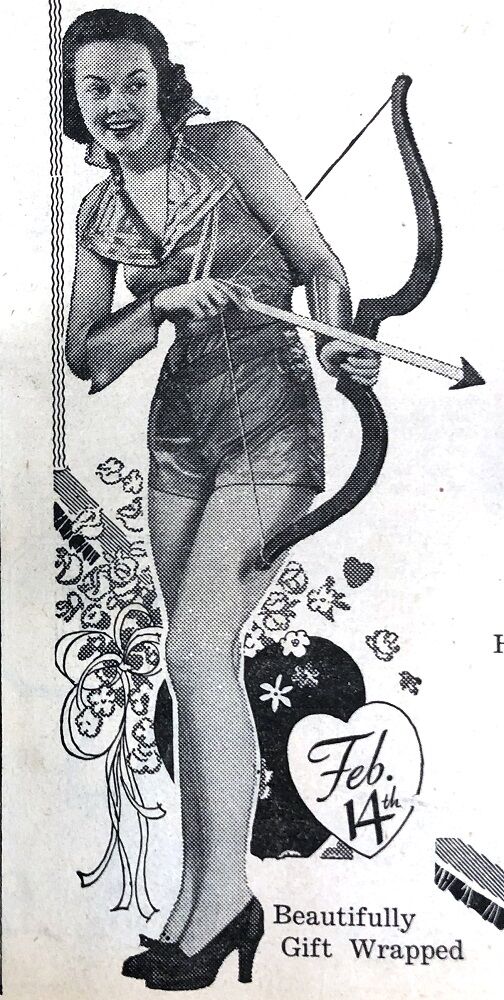 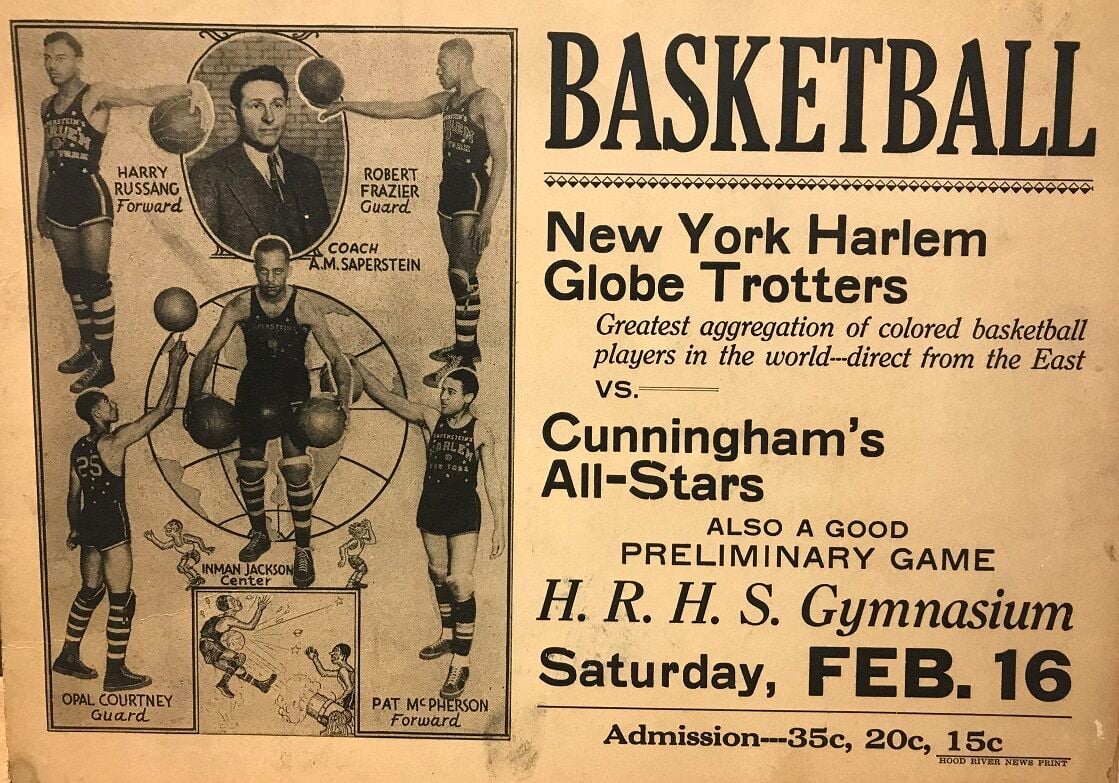 A decades-old poster, found in the Hood River News printing archives, with terminology that remains only in history. The Harlem Globetrotters played in Hood River c. 1935, at what is now the Hood River Middle School gym. Editor’s note: We recognize that certain words used 85 years ago are now offensive as well as dated, and present them in historic context.

By setting aside an airplane base, Hood River now has the opportunity to become internationally known “in the air,” according to Lieut. Vern U. Ayres, R.M.A., secretary of the Aero Club of Oregon, who was a visitor to the News office on Wednesday. Lieut. Ayers is now engaged in charting the necessary landing fields and sites for hangers in eastern Oregon, having completed his survey of the western and southern half of the state. He hopes to interest local organizations in the permanent establishment of a landing field as a base for circular flights over some of Oregon’s most beautiful scenery and also for commercial trips. — Hood River News

With blood stains upon his shoes, which he cannot explain, Earl Janet, transient laborer, is in the city jail today, believed by police to have some connection with the mysterious killing of Gus Hansen, aged recluse who was found murdered at the foot of a cliff west of the city yesterday. Janet was arrested by the police in a general round-up of suspicious characters in the city, in which eight men were lodged in the city jail. — The Dalles Daily Chronicle

While no delegations appeared at the meeting of the Hood River County School Unit Board Wednesday evening, before the meeting came to an end, Secretary Ed. Steele, of the chamber of commerce, appeared to present to the board a plan to establish National Defense schools covering farm mechanics and carpentry, similar to those being established at Hood River High School, in high schools at Parkdale, Odell and Cascade Locks. The board at once adopted the plan and will cooperate with Steele to have these schools open as soon as practicable. Odell High School gymnasium is well adapted for such a project and plenty of students in the valley will be available between the ages of 17-24. — Hood River News

Legislation empowering the Oregon state highway commission to construct of acquire bridges across the Columbia River will be sought by a Mid-Columbia delegation which will converge at Salem tomorrow, when a joint hearing with senate and house committees is scheduled regarding house bill No. 204. Dalles members of the delegation expect to leave here tomorrow morning. Other representatives will be present from Hood River, Bingen and White Salmon in an effort to present a untied front.— The Dalles Daily Chronicle

Tapped as Hood River County’s Outstanding Senior Citizen for 1960 Monday evening, Rev. Albert Allen, Rector, St. Mark’s Episcopal Church, stood a few quiet moments on the podium with his award that evening, then promised the applauding banquet audience that he would continue to “do my best” for his work and his community. It was a quiet Rev. Allen banquet-goers saw Monday. Saddled with membership on almost every major community committee, he spent most of 1960 in full flight, stirring up interest and enthusiasm in the county’s new Public Affairs forum. — Hood River News

Additional company records received from Fancis Seufert of The Dalles have enhanced “the already magnificent Seufert marine collections” in the Oregon Historical Society library, Portland. The society announced this week that hundreds of photos, thousands of fish packing records and other documentation of the Columbia salmon industry now make up the society’s record of the Seufert Bros. Co. The Seufert Bros. cannery was forced to close at the time The Dalles Dam was constructed.— The Dalles Daily Chronicle

Trouble-plagued Crystal Springs Water District, still licking its wounds after a Christmas flood knocked out its main line, had new man-made problems to face this week. The company’s Odell headquarters was stripped by burglars over the weekend and the final list of stolen items looked like the firm’s inventory list. Total loss has tentatively been set at $4,700. The garage, shop and adjacent offices were all gone through with a fine-tooth comb and absolutely scoured of goods. — Hood River News

A new telephone cable underneath the Columbia River was put into service Friday to serve United Telephone Company of the Northwest customers in Stevenson, White Salmon, Bingen, Goldendale and other areas. The new underwater toll cable replaces the section that was strung across the drawspan of the Hood River toll bridge, much like a clothesline. There, the old cable was quite vulnerable to the strong Columbia Gorge winds. “The 12-year-old cable was taking a beating,” said Bob Condon, outside plant engineering supervisor, who oversaw the project for Untied Telephone. “It was cracked and leaking.” — White Salmon Enterprise

The Eastside Water Project was declared complete Monday night with good news for those who helped pay its direct costs. Because federal grants were greater than anticipated, there will be cash refunds and credits to property owners. — The Dalles Daily Chronicle

Hood River Valley farmers want a bigger slice of the fruit pie. “It is time to ‘raise a little hell’ when our local grocery store starts selling foreign fruit — directly competing with the local grower who can’t even get back the cost of production,” said Camille Hukari, a local fourth generation fruit grower. Hukari and 14 other orchardists recently formed the Tractor Coalition and staged a parade and rally on Tuesday to bring public attention to the plight of the agricultural industry. — Hood River News

Hank Patton and Jim Bull are planning to turn the former Estey Ranch in Underwood into a world-class site focusing on the science of sustainable resources management and apprenticeships in performing arts. In a $1.62 million transaction that was finalized at the end of December, World Steward — a not-for-profit organization — is developing an ambitious business that will turn the 223-acre property into a hands-on research station and learning facility that will simultaneously focus on sustainable agriculture and performing arts. The Seattle-based Bullitt Foundation sponsored the project. “The Gorge is ready for something like this,” said Hank Patton, president and chairman of Underwood-based World Steward. — White Salmon Enterprise

Need a unique frame for your 2001 eighth grader’s graduation? Want a wooden backing for that favorite middle school photograph? Or do you just feel a special connection to the old gymnasium floor of The Dalles Middle School? The Dalles School Board approved a fundraising plan to put pieces of the old gym floor for sale beginning today. — The Dalles Chronicle

Slide Dumps UP Locomotive into Lake

Torrential rainfall, the heaviest to be recorded in a 24-hour period here for a number of years, played havoc with transportation, put streams out of their banks and caused several accidents, including derailment of a Union Pacific train in the Columbia Gorge.

Loosened by the downpour, hillsides gave way at numerous locations to block roads and to produce a slide that caused the train mishap.

The eastbound UP mail-passenger train No. 12, carrying more than 100 youths to a church meeting, was hit by the slide about 20 miles east of Portland in the Rooster Rock area.

United Press International said Thomas Marshall, 42, Portland, electrician aboard the nine-car train, was taken to a Gresham hospital with abrasions about the face and a possible arm injury. He was reported in good condition.

Deputies said some of the rocks were “big as cars.” The slide covered the length of three railroad cars. Track both in front of and behind the train was torn out.

The slide in the Gorge was one of many in this region.

A sheriff’s officer said had the slide occurred moments later it would have struck the cars carrying the passengers.

An officer said tons of rock and mud fell from the bluff below the Vista House as the train was passing. The two diesel locomotives were hurled into the water, and two baggage cars and the mailcar were derailed.

Rainfall that measured 1.78 inches in The Dalles pelted the entire Northwest and caused flooding and numerous accidents.

With the object of safeguarding the city water supply, plans are now proceeding for the condemnation of two houses and a shack on the corner of Montello Avenue and 13th Street.

When the case is settled, these houses will be removed and the site absorbed into the city park. The water department will then build a new reservoir immediately below the existing one and will fill in to the concrete wall, and thus widen Montello Avenue to its proper width. With the new fire truck now in operation, it is necessary to maintain an adequate supply of water at all times and in the opinion of the experts, a new reservoir to conserve water that is now going to waste is the logical solution.

Britain Breaks Off Relations With Rumania

State Job Picture May Look Up

What's Happening for the week of Feb. 22