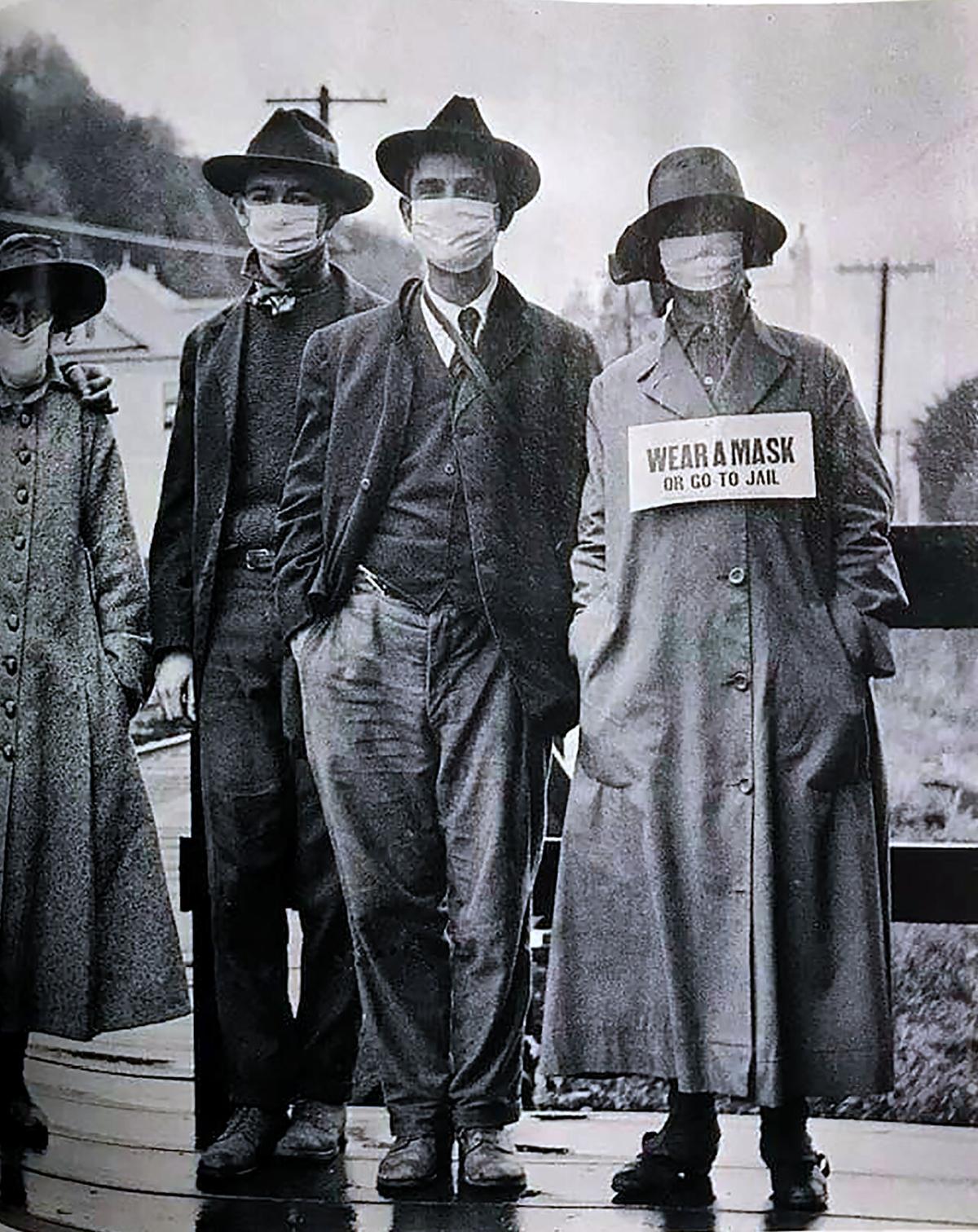 A photograph documenting the flu pandemic of 1918 in California. 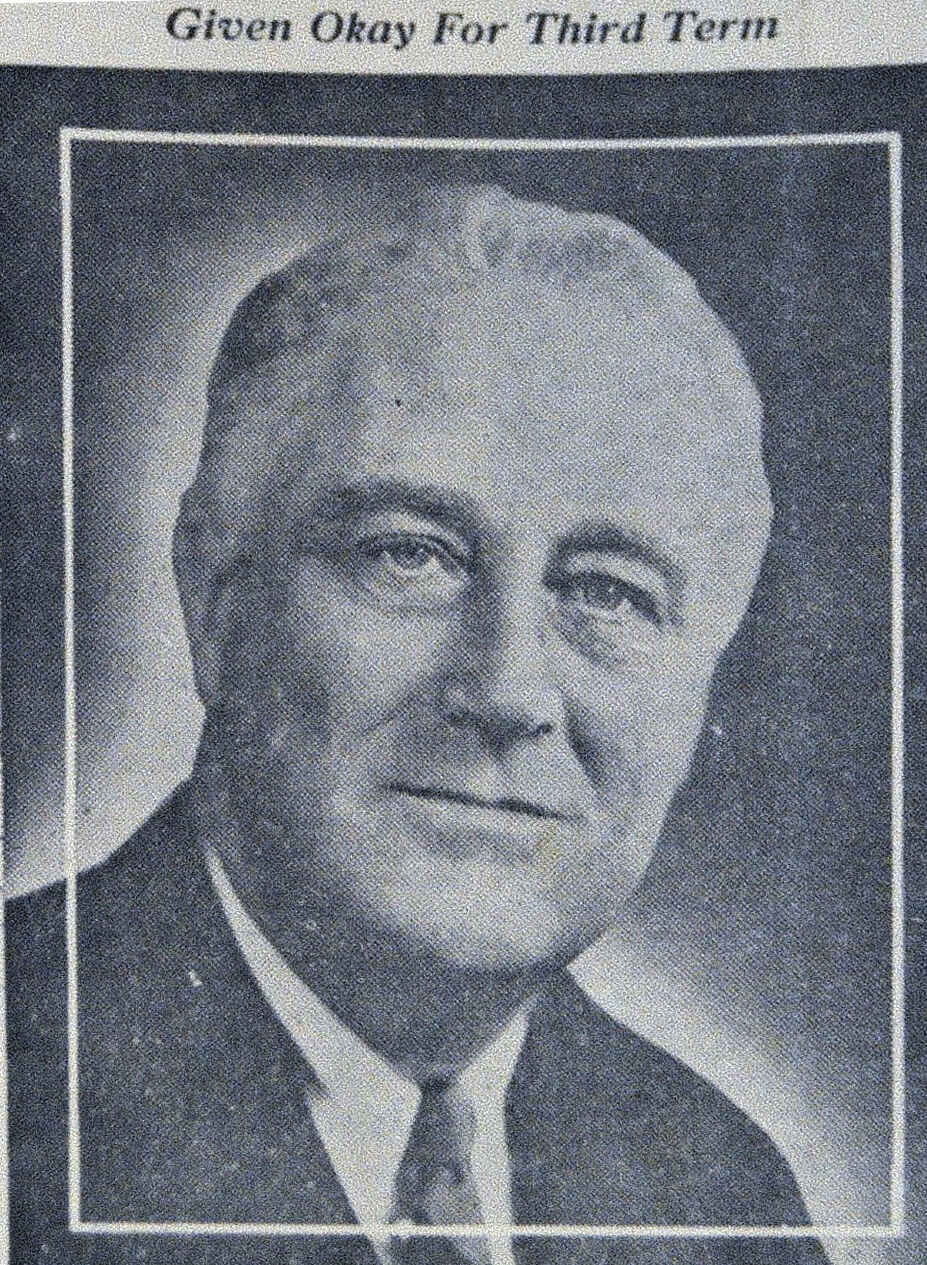 A front page photo in the Nov. 8, 1940, issue of the Hood River News announcing FDR had been elected to a third term. 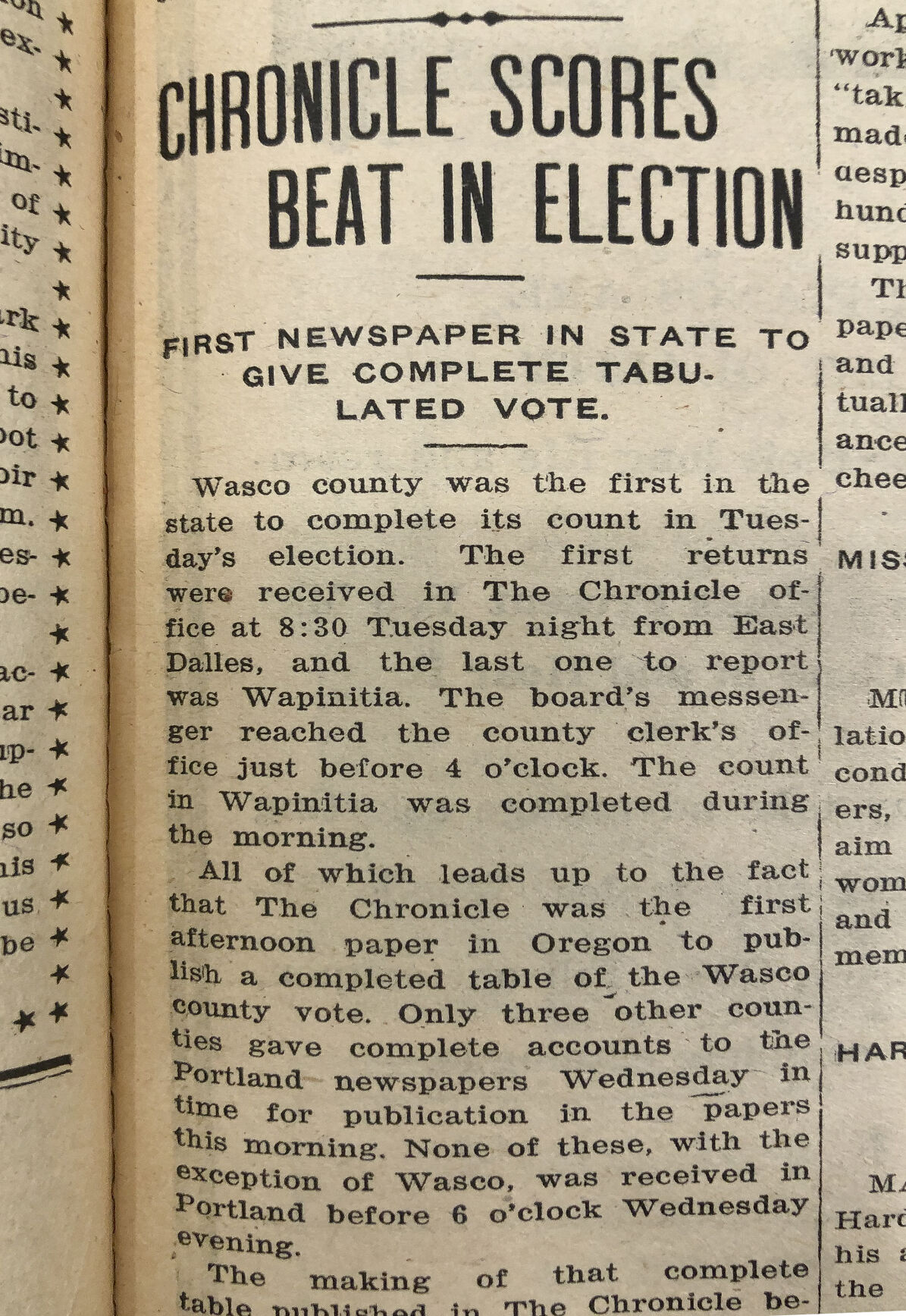 The Dalles Daily Chronicle toots its own horn as the first publication with full Wasco County results to hit the news stands, beating out the Portland newspapers. 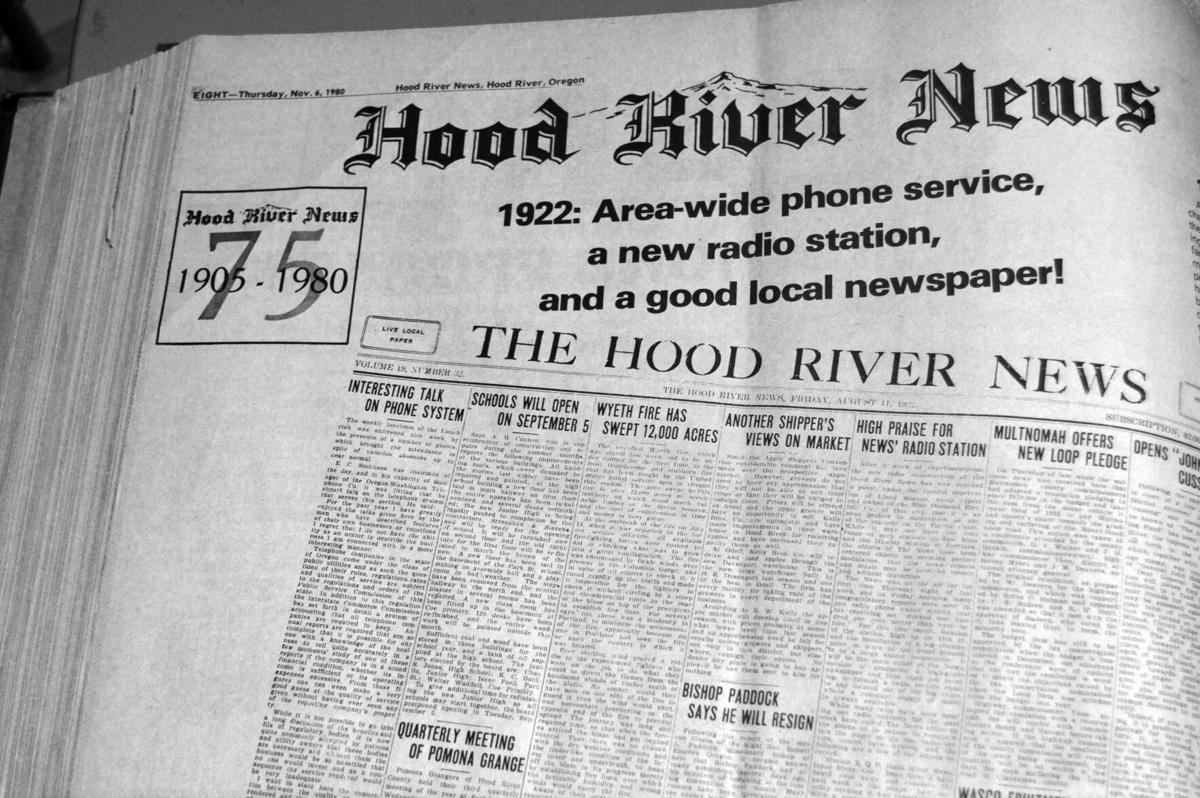 The Hood River News celebrates its 75th anniversary in the Nov. 4, 1980, edition.

The latest news to hand from the big electoral centers shows that not only is the nation assured of a Republican tenure of the White House for at least the next four years, but that President Harding will have a strong working majority in both the Senate and the House of Representatives. In city news, E.L. Scobee has been elected mayor of Hood River. — Hood River News

Col. W. L. Winegar, the U.S. Corps of Engineers district engineer at Portland, said today that “no decision has yet been made” concerning maintenance of the deep draft ship channel from Vancouver, Wash., to The Dalles. W.S. Nelson, manager of The Dalles Chamber of Commerce ... said “extenuating circumstances” prevail in The Dalles ... and that the Chamber and the Port of The Dalles will fight any attempt to discontinue dredging and that port facilities will be built in this community. — The Dalles Chronicle

The presidential election of 1940 set new marks in Hood River County and city for the number who performed their duty as American citizens and exercised their right — and privilege — to vote and, as the figures reveal, a large percentage of those who had registered to make a record high registration in this county and city throned to the precinct halls, awaiting their turn to mark their ballots. By noon, several of the precinct chairman expressed the opinion that it would be impossible for all to vote by 8 p.m., and received instructions that all who were on hand prior to the hour of eight o’clock in the evening should be given an opportunity to vote, down to the last man and woman. — Hood River News

A gas barge, being propelled down stream by the river boat “Robert Grey,” collided with The Dalles ferry “Anna Belle S.” in the middle of the Columbia at 4 o’clock yesterday morning, breaking off the ferry’s overhang to the gunnel and tearing out the cable, it was reported this morning by Mrs. Charles T. Smith, wife of the owner of the ferry. Service across the river was maintained when the emergency ferry, the “Rogue” was put into immediate operation. Mrs. Smith said that the barge carried no lights, that no signal was given and that the ferry did not sight the gasoline conveyance until it was 100 feet distant, too close to avoid the collision. — The Dalles Chronicle

Saturday, Nov. 5, county Boy Scouts will swarm over the county with their “Get Out the Vote” literature. The special cards, provided by the Ford Foundation on a national scale, will be personally fastened on all county front door knobs by the scouts. As a follow-up to this service, a large number of business houses have advised the chamber of commerce that they will augment the scout program by sounding their whistles, sirens and bell son election day. The volunteer fire departments of the county and the churches will be lending their support. — Hood River News

Chronicle turkey nights for the month of November begin again tonight. Ten big turkeys will be given away to 10 local shoppers. From 6 p.m. Friday to 9 p.m. tonight shoppers may register in any of the Chronicle Turkey Stores, identified by the window sign, listed on the page. — The Dalles Chronicle

The Salvation Army — one of four agencies participating in The Dalles current First Annual Fourway Fund Drive — is an agency of almost unbelievable scope and vigor. For example, during the past year relief services have been requested by 788 applicants; garments and shoes have been supplied 1,673 requests; grocer orders to 209; Christmas food aid to 70 and toys to 650. — The Dalles Chronicle

Actually, Manes has more of a mysterious creek than a fountain on his hands.

Any perceptive motorist traveling the east end of Third Street the last two months has likely noticed the farthest reaches of this sudden, impudent stream.

For the past several weeks a steady volume of water has been running north across Third Street just west of the Hand-Out Drive In. It runs west in the Third Street gutter and eventually drains into the Monroe Street Catch basin.

They soon discovered it was coming from heavy underbrush at the foot of a bluff just south of Third Street. After hacking away thick wild blackberry bushes and entwined bunches of thorny creepers (on the bluff above) they found a trickle of water coming from the rocky rim of the bluff. Manes speculates the water is probably emission from natural springs, as the nearest water line is over two blocks away. A test of the water should determine its origin.

Proposals for a larger lock at Bonneville Dam and a deeper ship canal between Vancouver, Wash., and The Dalles drew support Tuesday from Columbia River shipping interests at a hearing by the U.S. Army Corps of Engineers. District Engineer Col. Paul Triem, who conducted the hearing, noted that except for Bonneville, all dams in the Columbia-Snake River basin have locks 96 feet by 75 feet. Bonneville lock, the oldest in the basin, is 76 feet wide and 500 feet long. Barge operators noted the present Bonneville Lock causes delays of up to several hours as strings of barges are broken up to be taken through the lock.

America and Oregon might as well have looked to Hood River County to find out how the elections would go in 1980. In almost every case, Hood River County voters followed national and state trends and turned out in surprisingly large numbers to vote Tuesday. They favored Ronald Regan by a solid margin, voted for Bob Packwood as the rest of the state did, and on state races, Hood River County backed Norma Paulus for Secretary of State, Clay Myers for treasurer and Dave Frohnmayer for Attorney general. Oregon handed all of them (all Republicans) solid victories on Tuesday. — Hood River News

There was general agreement on the need of additional jail space, but how to finance the project appeared to be the problem aired at a meeting Monday night on the future of jail facilities in this area. — The Dalles Chronicle

B.E. Caldwell Jr. could call it a real christening shortly after he moved his public accounting business to 1217 12th St. this week.

He opened for business in the new office space Monday and wasn’t completely moved in when the christening took place Tuesday.

When Caldwell arrived at the new office about 7:45 a.m., he was greeted by water gushing from under the door. He opened it to discover about three inches of water covering about a thousand square feet of floor space.

His new office is in the newly remodeled quarters on 12th Street, formerly occupied by the Optical Shop, which closed after fire gutted the building earlier this year.

Caldwell called staff members Carol Flint, Connie Richardson and Elizabeth Stintzi and told them not to come in, and then the contractor was called to check out the problem. There was still some trim work to complete when the new water problem developed.

“Something in the bathroom plumbing failed,” said Caldwell, who noted it must have malfunctioned between 6:30 p.m. Monday and a few hours before he arrived Tuesday morning.

Caldwell said there were a few boxes of records on the floor that got wet and will have to be dried out, but that there were few, if any, records destroyed.

“We’ll have to do a certain amount of work around the cleanup,” he said. “I don’t think there is any serious damage.”

Serious damage or not, it was a rude reception for the new tenant, who was moving from offices at 1206 Belmont, a few blocks from his new location.

Caldwell was taking the problem in stride, but he couldn’t help wondering about the incident. “Maybe the building’s jinxed,” he speculated. “First we have a fire, then a flood.”

Some Hood River County residents will be left without water Nov. 9 as city crews seek to reduce pressure that is repeatedly breaking a main line. Dave Bick, city engineer, said the water main will be shut off south of the five-million-gallon reservoir starting in the early morning hours. The Dee Flat area and surrounding higher areas will be particularly affected, he said. According to Bick, Crystal Springs Water District will be able to supply some water to the city system through an interconnection near th Old Trunk, but people owning businesses or residences near Dee Flat should be prepared to be without water for the entire day. — Hood River News

Mosier residents are gearing up for yet another battle in their long-running quest to keep the Oregon Department of Transportation from turning their city into a noisy dust bowl. — The Dalles Chronicle

The decision on whether the city of White Salmon will hang on to ownership of the building that once housed the White Salmon Community Library appears to have been made. Although a formal vote by members of the White Salmon City Council will not be taken until Nov. 15, council member Penny White Morris, chair of the Real Estate Committee, is recommending keeping the building, located at 142 E. Jewett. The building has been vacant since the library moved to its new location in April. — White Salmon Enterprise

‘She moved us forward’: Lorinda Hoffman honored as she retires from FISH