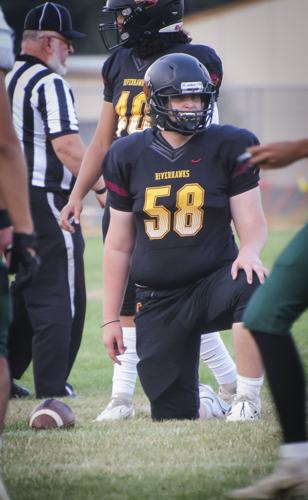 The Dalles junior defensive lineman Creed Westerfield (58) sets up against the Parkrose offense during Friday’s non-league game in The Dalles.Mark B. Gibson photo 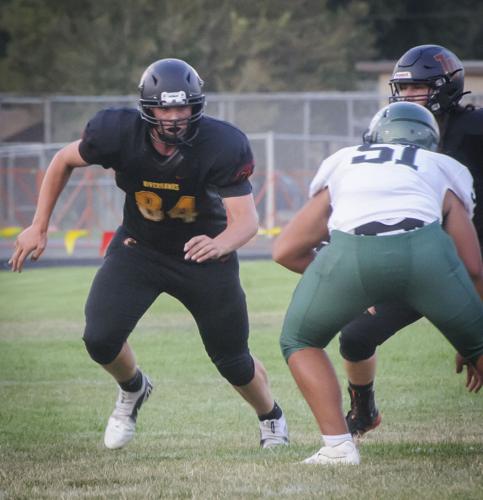 The Dalles junior defensive lineman William Lee (84) responds to a hole in the Parkrose offense during Friday’s non-league game in The Dalles.Mark B. Gibson photo 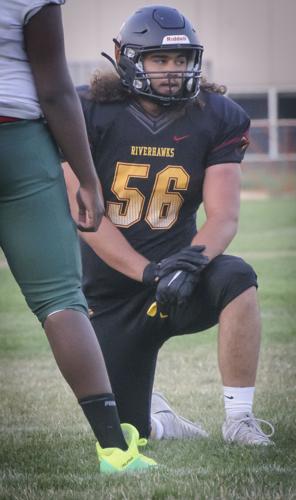 The Dalles defensive lineman Evan Baldy (56) waits as the Parkrose offense sets up during Friday’s non-league game in The Dalles.Mark B. Gibson photo 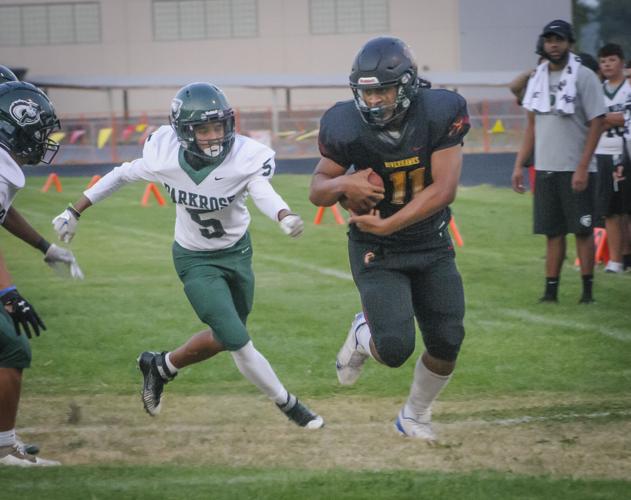 The Dalles junior defensive lineman Creed Westerfield (58) sets up against the Parkrose offense during Friday’s non-league game in The Dalles.Mark B. Gibson photo

The Dalles junior defensive lineman William Lee (84) responds to a hole in the Parkrose offense during Friday’s non-league game in The Dalles.Mark B. Gibson photo

The Dalles defensive lineman Evan Baldy (56) waits as the Parkrose offense sets up during Friday’s non-league game in The Dalles.Mark B. Gibson photo

The Dalles High Riverhawks football team had an absolutely fantastic start to its season as it won, 46-6, over the Parkrose High Broncos (0-1) Sept. 2 at Sid White Field at the Wahtonka campus.

The Riverhawks, guided by first-year Coach Marc Schilling, played well from start-to-finish. “It was a great night, and we came out and did a lot of things that we wanted to do,” said Schilling. “We wanted to play better defense, which we did, and we held them (Broncos) to three yards of total offense in the first half.

“The big thing I was happy with is that we held them to 0-for-9 on third-down conversions. That’s one of things I kind of hang my hat on and we don’t want to make sure that we don’t give a third-down conversion, because we want to get the ball back in our hands. Offensively, we struggled a little bit, but we found some things that worked.”

The victory provides the Riverhawks (1-0) with momentum as they prepare for their next contest — a Gorge rivalry match Friday at 7 p.m. against the Hood River Valley High Eagles (0-1) in Hood River. The Eagles lost their Sept. 2 opener, 44-8, at Redmond.

“We’re going to play Hood River now on Friday and I think that’s going to be a wonderful game,” said Schilling. “We have an opportunity now to try and get another win and hopefully reestablish ourselves as a dominant team here in the Gorge. I don’t know a lot about Hood River. I don’t want to go in there feeling like we’re an underdog either. We’re just going into the game with the attitude that we’re going to take care of business.”

The Dalles junior running back/linebacker Andre Niko led the Riverhawks to the Parkrose win, with one rushing touchdown on 13 carries for 154 yards. Niko had two touchdown receptions and 55 receiving yards.

“I need to say thank you to Coach Schilling for calling the plays because he was actually out on the field with us,” said Niko. “I want to thank our offensive linemen, too, because without them, I wouldn’t have had any touchdowns or got as many yards rushing as I did. To kick off the season like this, it just feels amazing. We’ll have momentum for our rivalry game against Hood River now, too.”

Senior quarterback Josh Taylor, who transferred to The Dalles from Dufur High during the summer, played in his first game with Riverhawks and was 2-for-5 passing for 55 yards and two TDs.

“Our first drive seemed a little rough, because I think I was still trying to adapt to playing 11-man football,” said Taylor. “Once I got the first-game jitters out, then we got locked in and we started scoring. I threw two touchdown passes and Andre made great plays and he ran the ball well. Riley Brock and Anthony Jara both did a good job receiving and Manatu ran the ball well, too. Our offensive line just gave us a great push, too, on every play.

“Coach Schilling has changed our program so much, especially on defense and we only allowed three yards of offense for Parkrose in the first half. I think we’ll have a really good season this year and our goal is to reach the state playoffs.”

The Dalles built a 12-0 first-quarter advantage, as Taylor tossed touchdown passes of 24 and 31 yards to Niko. In the second quarter, senior running back Manatu Crichton-Tunai scored on touchdown runs of nine and 10 yards and Niko had a 35-yard touchdown run to help The Dalles go on top 34-0 at halftime.

“I think Coach Schilling has helped us improve a lot, particularly on defense and we’re doing really well offensively, too,” said Niko. “I had fun and I just tried to stay locked in, because I don’t like getting any distractions.”

Crichto-Tunai recovered a blocked punt and scored a touchdown in the third quarter and senior defensive tackle Evan Baldy took the ball right out of the hands of a Bronco player and sprinted 70-yards for a touchdown to put The Dalles in front 46-0 in the third quarter. The Broncos scored on their final possession of the game as the clock expired to avoid a shutout.

“Offensively, we struggled a little bit, but we found some things that worked,” said Schilling. “Our identity wasn’t fully on display tonight and we took what they gave us. Andre and Manatu both ran hard and that gives us a good, two-back offense on the ground, and we can also throw a little bit, too. Josh is a great field general who gets things done; he’s very efficient and he’s calm under pressure, so having him here is just great.”

“This win gives us a lot of momentum and it’s just a great feeling starting the season with a win,” said Jara. “Coach Schilling came out here and changed our program and he’s just doing a great job. It’s a great start; it helps put us on a roll and it gives us momentum going into the big rivalry game against Hood River on Friday. I think we have a better chance of having a successful season since we moved down to the Class 4A level, and we should have a good chance of making it to the playoffs this year.”

Eagles bounce back, move to 2-2 after Forest Grove win