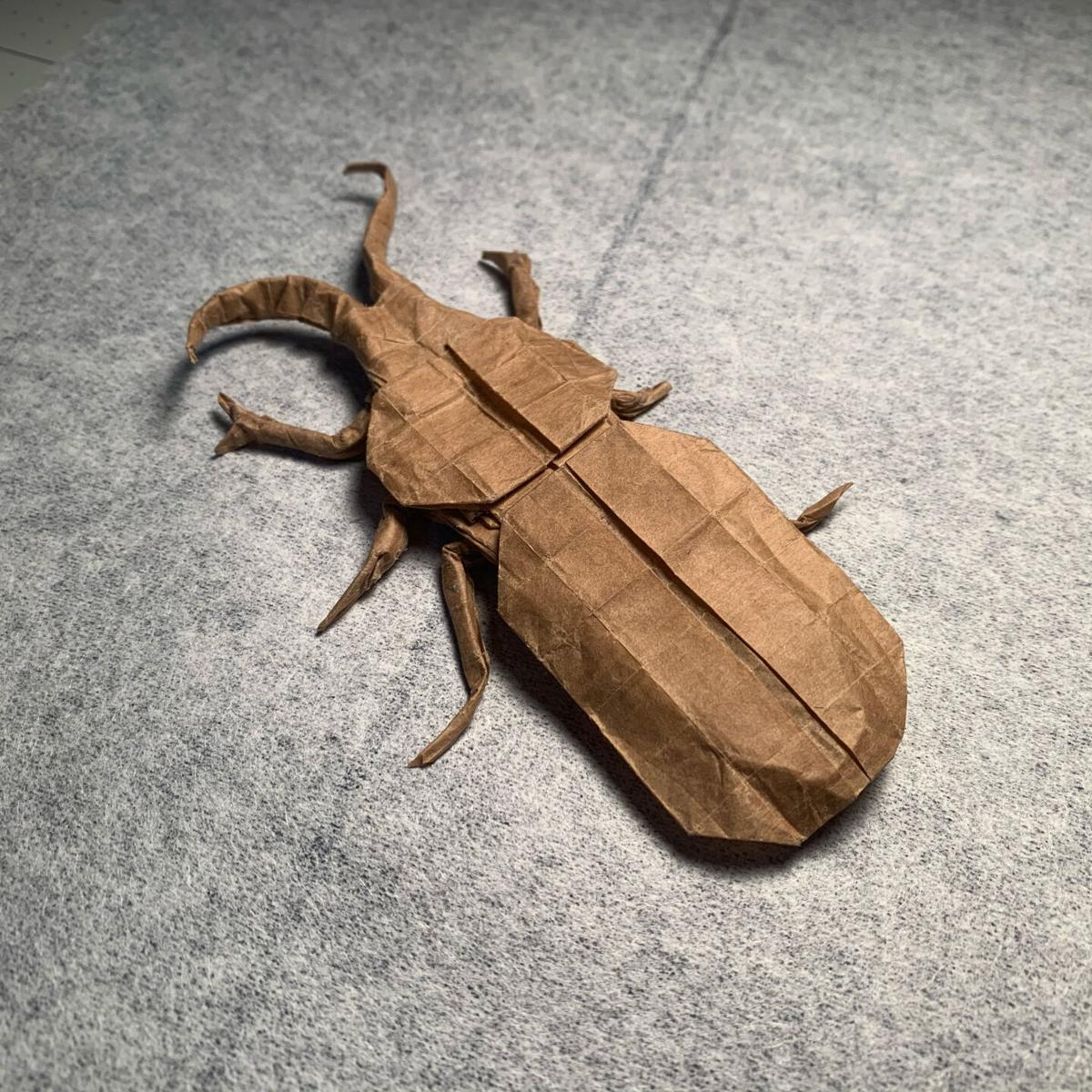 Elijah Perkins spent about eight hours making this origami beetle. He wrote about the beetle for his application essay to the University of Chicago, where he was accepted. 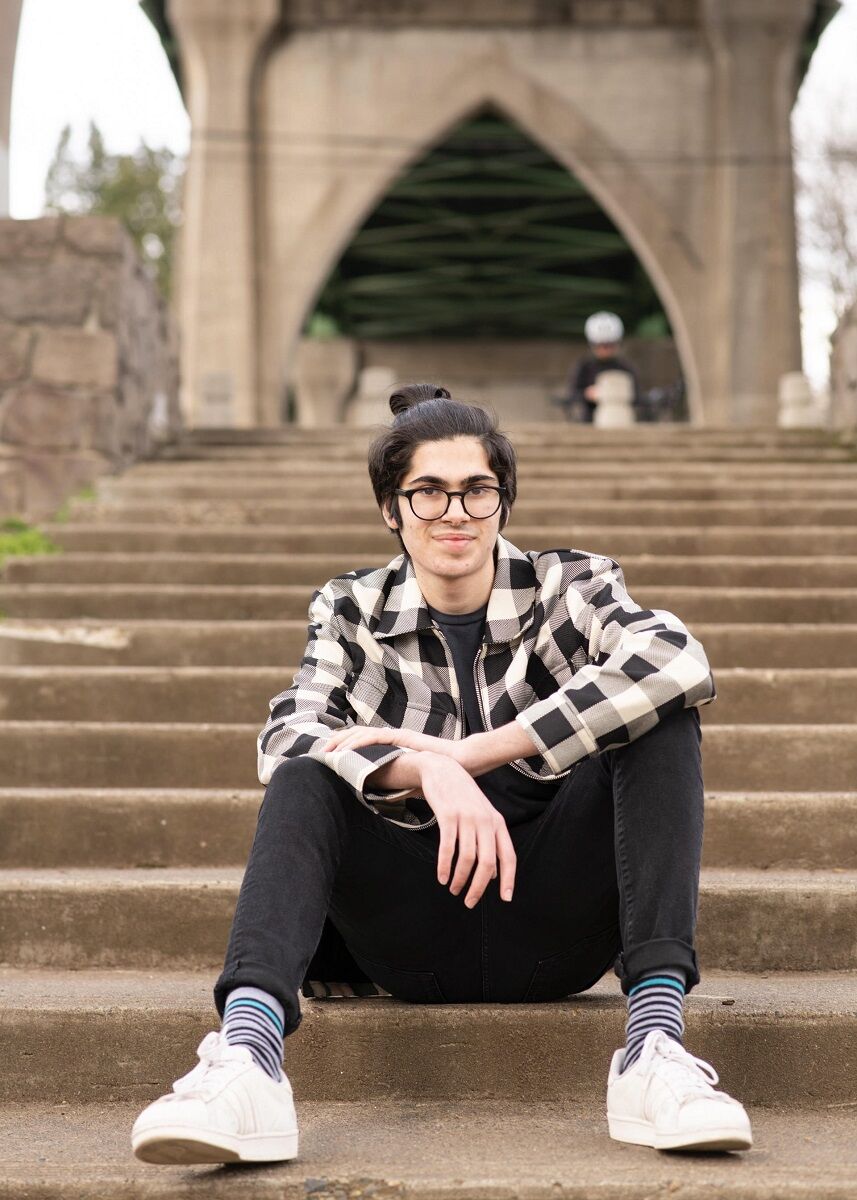 Elijah Perkins, who graduates from The Dalles High School this year, is attending the University of Chicago, a top-10 school nationally, in the fall.

Elijah Perkins isn’t put off that the University of Chicago’s best known catch phrase is “where fun goes to die.”

“They’re known for being really rigorous and maybe it’s too much, but I’ll find out,” said Perkins, a senior at The Dalles High School who moved here two years ago from Portland.

“I don’t think anyone at the school thinks it’s true, but it’s pretty funny.”

Perkins was one of just 6.2 percent of applicants accepted to the top-10 university.

His mom went there, and his dad worked there, but he emphasizes that’s not why he’s going. In fact, he had to convince his parents that wasn’t the case.

Rather, on a site visit junior year he fell in love with the campus itself — with it’s old, ivy-covered Gothic architecture — and then, last fall, he was intrigued by the essay topics in the application.

There were seven options for essay questions.

The one he chose to answer reads as follows: “Subway maps, evolutionary trees, Lewis diagrams, each of these schematics tells the relationships and stories of their component parts. Reimagine a map diagram or chart. If your work is largely or exclusively visual, please include a cartographer’s key of at least 300 words to help us best understand your creation.”

So Perkins wrote about one of his origami creations, a beetle, and in an accompanying 700-word essay described why he likes origami, and the goal of it, which “is to create, but also teach.”

Origami is making creations out of a single sheet of paper with only folds, and no cuts.

Perkins started doing origami as a kid, starting with the classic origami crane. In about eighth or ninth grade, he started seeing cool YouTube videos of modular origami, which uses multiple sheets of paper connected together. He belonged to the Portland Oregon Paper Shapers, an origami group. He went often and would spend three to four 4 hours folding.

He does use glue to hold his modular creations together. “I don’t want kids ripping them apart, it’d be a nightmare.”

He can look back at his work from two or three years ago “and how much it’s changed in terms of style, precision and complexity. It’s all about practice.”

And he thinks practice is a key aspect of being smart.

He considers himself smart, but also thinks the reason he’s smart is “it just takes practice. That’s now most things are. No one becomes smart overnight.”

For example, he likes history and English and his favorite aspect of it is the writing. “I’m good at it. I enjoy it. I feel like I can make good observations.”

But writing has been a hard-won skill. “It took a lot of practice for me,” he said.

“I looked at my friends’ writing and I said, ‘I want to write like that,’ and it changed and it got better.”

He is both a procrastinator and a hard worker. He may pick up the task at the last minute, “But it’s not like I do a bad job on what I do.”

He feels many students don’t put the necessary effort into their essays. “The secret to getting into the university that I applied to is I put in a lot of time into it and I edited my essays a lot.”

He feels his essay helped him get accepted. He doesn’t think it was his grades — although he has a 3.94 — but he does have a lot of extracurricular activities, including band, theater and origami.

Perkins joined theater when his AP teacher, Mary Jo Commerford, took him down the hall to see theater teacher Lowry Browning, and convinced him to get involved.

He does backstage crew. “The main appeal for me is my friends, if I’m going to be honest,” he said.

“I think your high school experience is just what you make of it. I could’ve squandered it and not reached out and do anything, and I think a lot of kids do that,” he said.

Like most students, Perkins has his favorite and not-so-favorite subjects. Science he can do without. “It’s not complicated, you just need to study things, and I don’t study the things. Also it’s boring. I don’t find much interest in it at all, like memorizing the periodic table is not for me.” He does add that he enjoys any class as long as it’s engaging and taught well.

His mother, Dr. Serene Perkins, is a physician and chief medical officer at Mid-Columbia Medical Center, and his father, Dr. C. Ryan Perkins, is in academia. He wasn’t pressured to go into either field, but he was expected to do well in his homework.

His dad is the South Asian Studies and Islamic Studies librarian at Stanford. Perkins didn’t want to go to Stanford though. It’s too hot down there, and it seemed like everyone was either a “super smart tech kid or a jock,” and he’s neither.

At the University of Chicago, students are more literary and academic, he said. And the cold weather is a big appeal for him. “Everyone’s wearing like big trench coats. I gotta get one of those.”

Making history: How the Gorge community is coming together to distribute the COVID vaccine