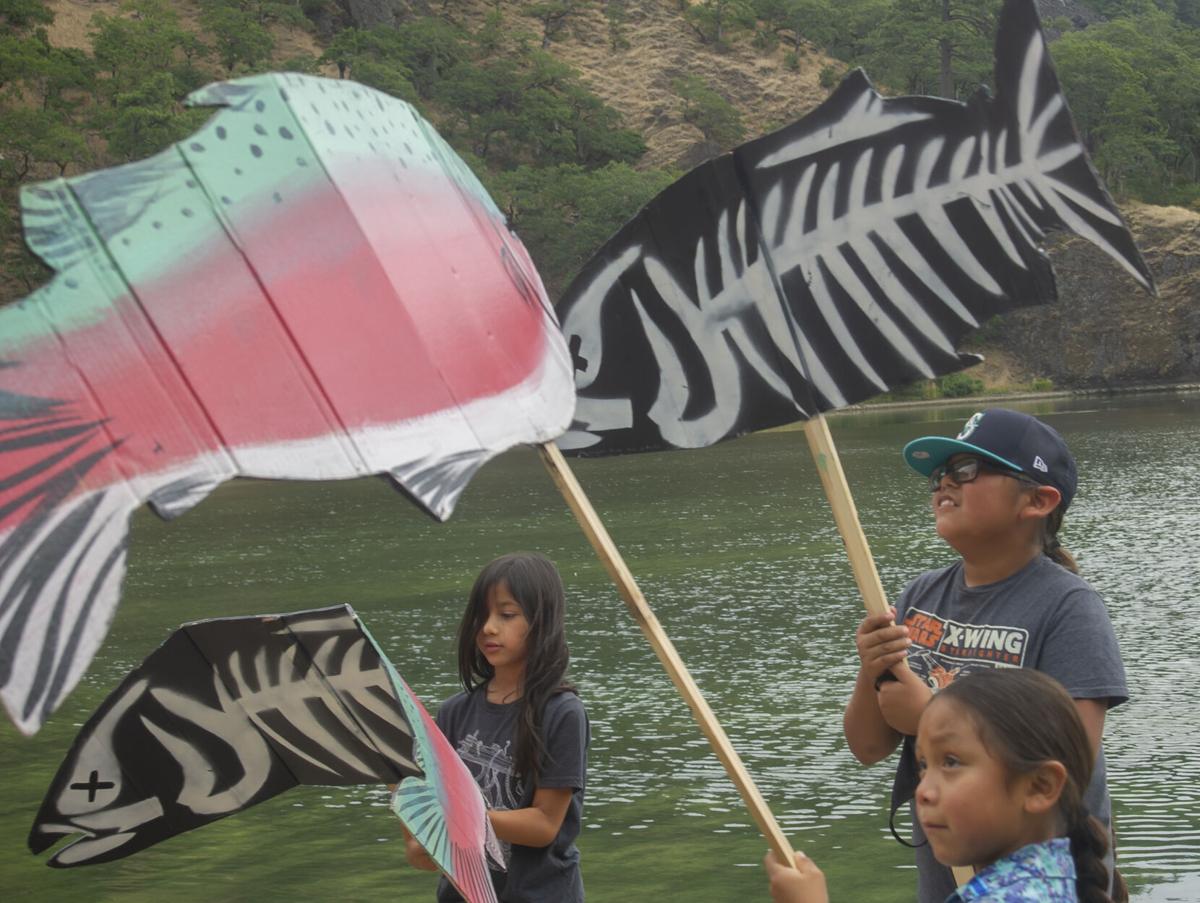 The life and death struggle of this summer’s run of sockeye salmon is represented by salmon banners during a Salmon Vigil at the mouth of the Little Salmon River Friday, July 30. Pictured left to right are Mila, 8, Tyler, 10 and Clint, 6. 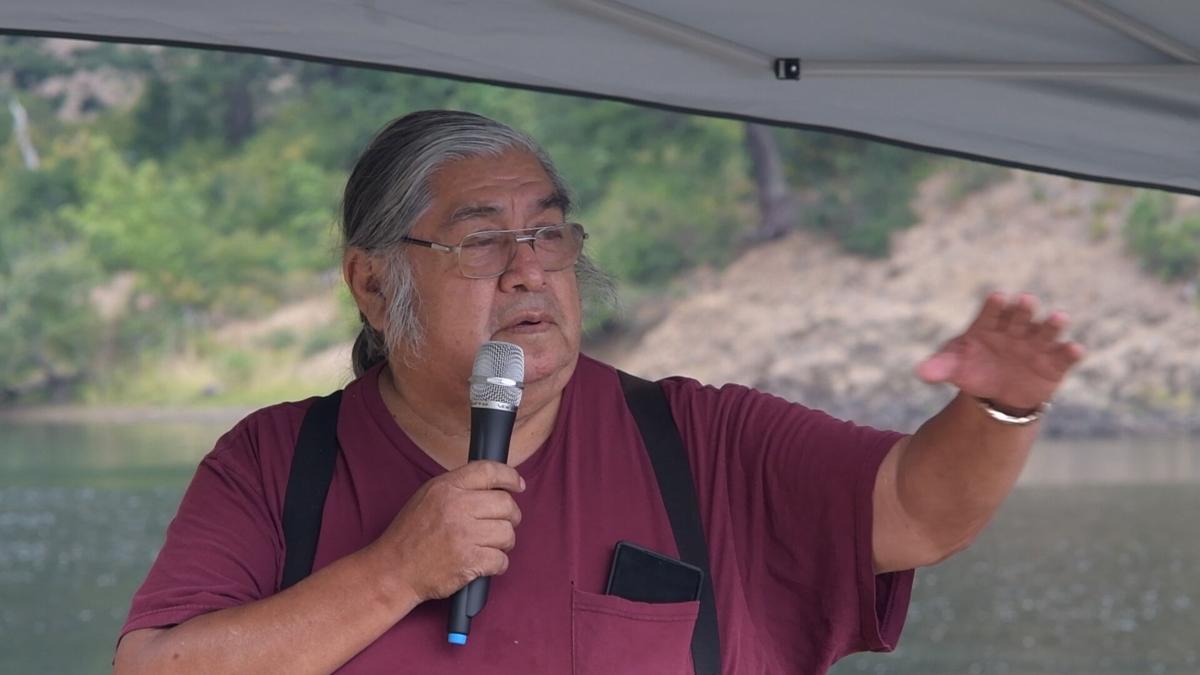 Wilbur Slockish, Hereditary Chief of the Klickitat People, who are members of the Yakama Nation, gestures toward the historic village of his people on the Little White Salmon River, inundated by Bonneville Lake when the Bonneville Dam was completed. 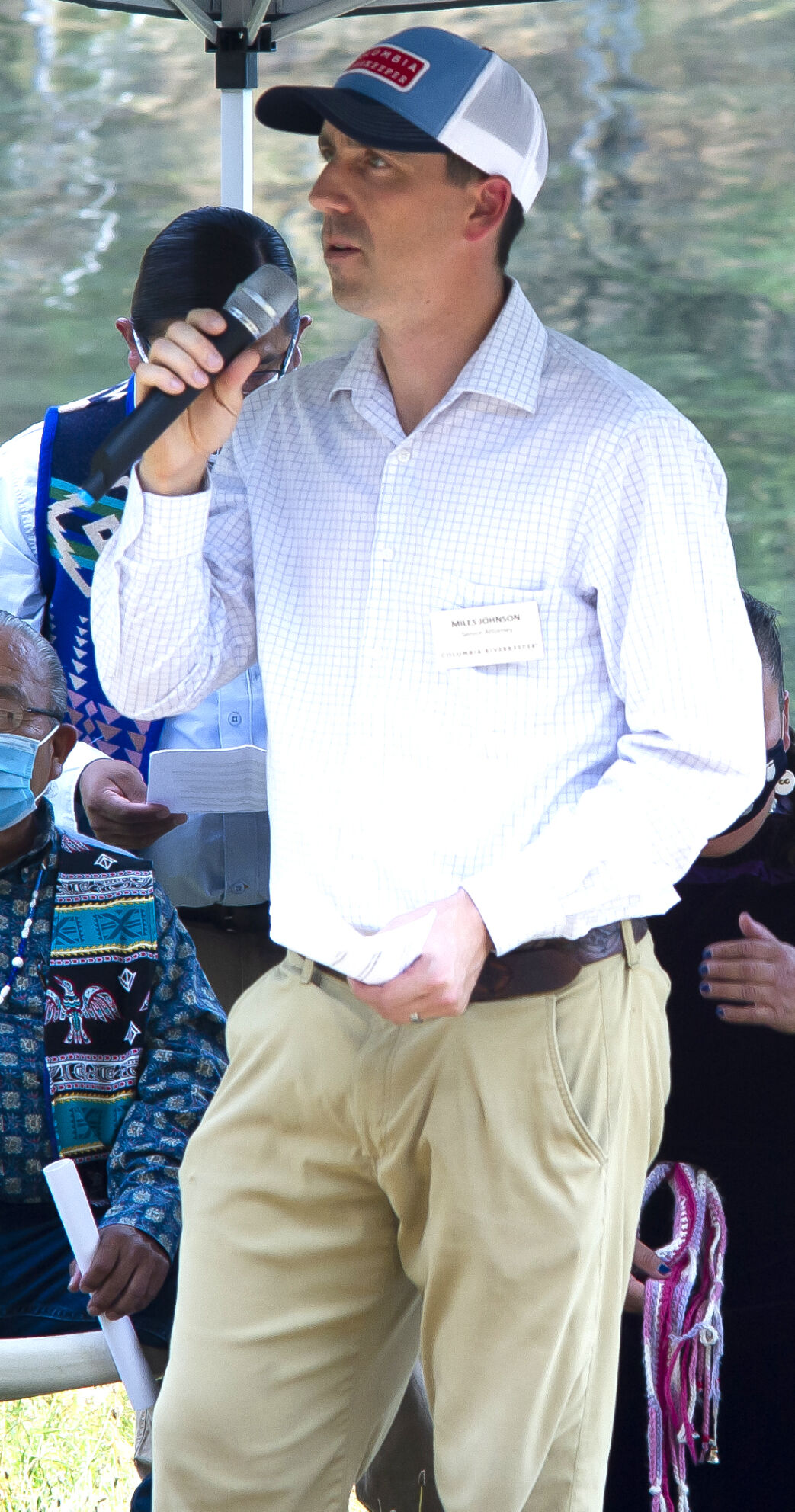 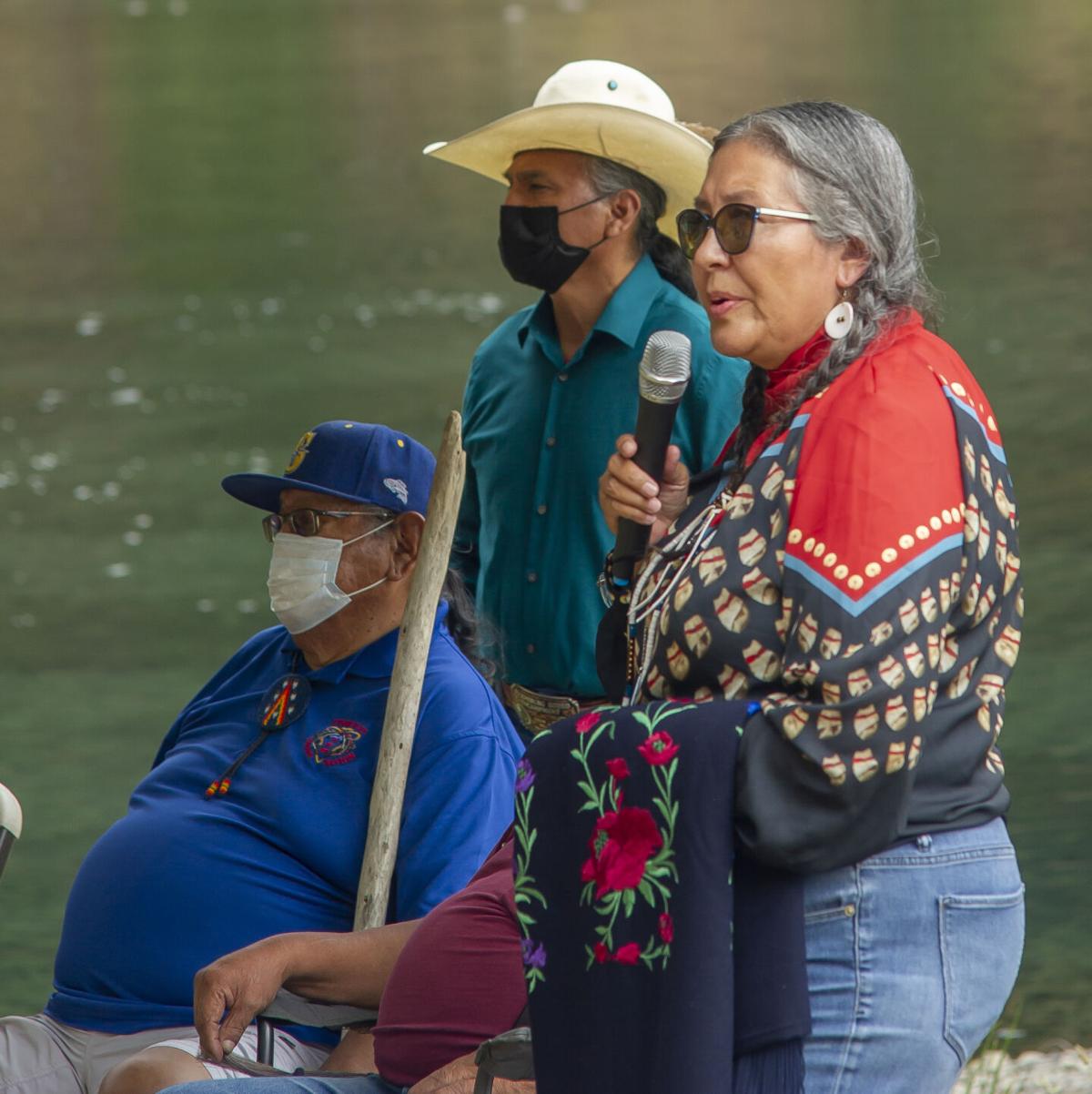 Cathy Sampson-Kruse, a member of the Walla Walla Tribe and board member of the Columbia Riverkeepers, speaks during a salmon vigil July 31, 2021. 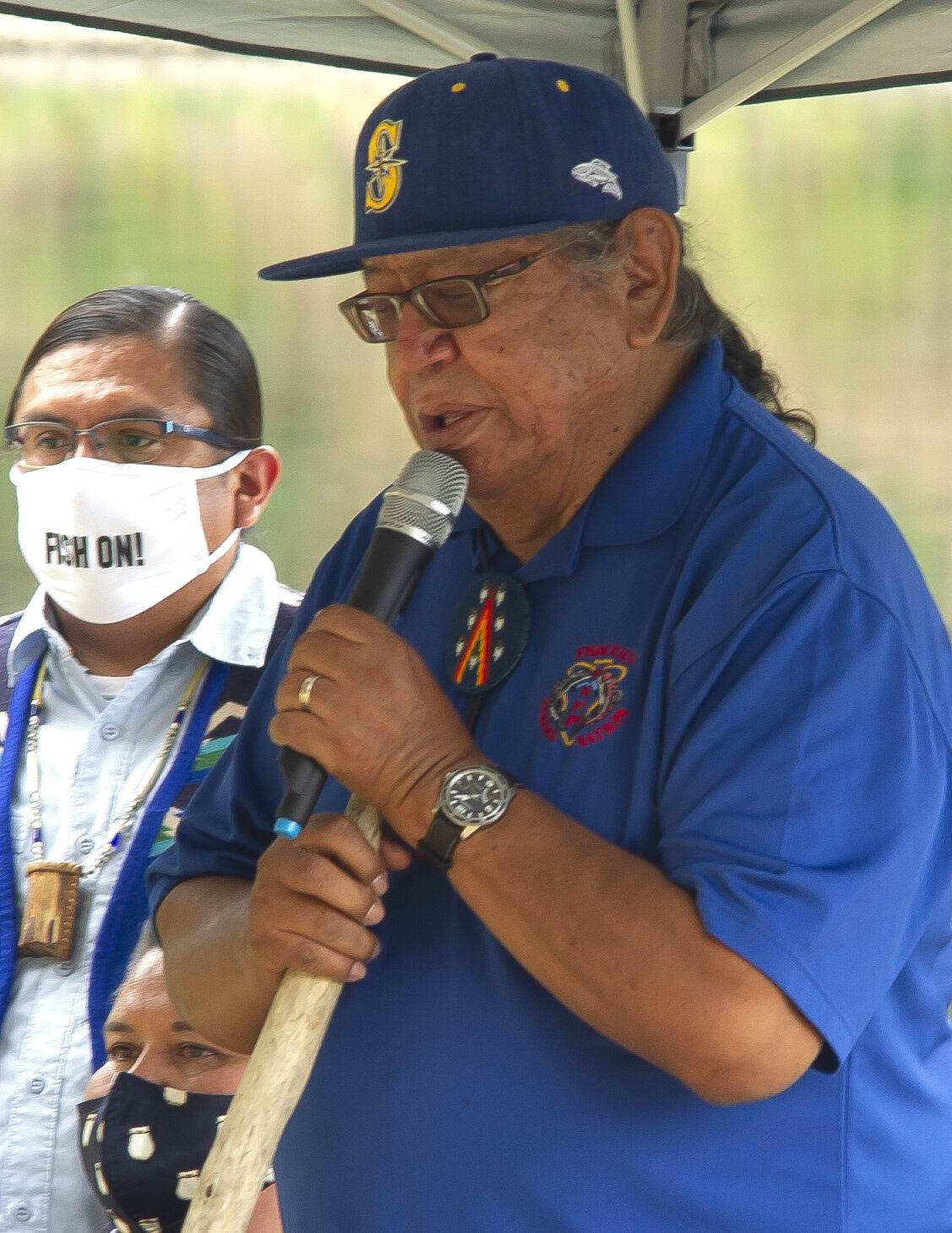 Migrating to an untimely death through the hot waters of the Columbia River, sockeye salmon are portrayed entering the Little White Salmon river, where many of them are dying. Pictured are, left to right, Alana, 6, Mila, 8, Tyler, 10 and Clint, 6.

The life and death struggle of this summer’s run of sockeye salmon is represented by salmon banners during a Salmon Vigil at the mouth of the Little Salmon River Friday, July 30. Pictured left to right are Mila, 8, Tyler, 10 and Clint, 6.

Wilbur Slockish, Hereditary Chief of the Klickitat People, who are members of the Yakama Nation, gestures toward the historic village of his people on the Little White Salmon River, inundated by Bonneville Lake when the Bonneville Dam was completed.

Cathy Sampson-Kruse, a member of the Walla Walla Tribe and board member of the Columbia Riverkeepers, speaks during a salmon vigil July 31, 2021.

Migrating to an untimely death through the hot waters of the Columbia River, sockeye salmon are portrayed entering the Little White Salmon river, where many of them are dying. Pictured are, left to right, Alana, 6, Mila, 8, Tyler, 10 and Clint, 6.

Sockeye salmon arriving at the Little White Salmon River west of Hood River are covered with lesions and dying due to high water temperatures in the main stem of the Columbia River.

The Little White Salmon River is located in Washington west of Bingen. Salmon often hold in cooler rivers when water temperatures are dangerously high in the Columbia.

“We are here at the mouth of the Little White Salmon River where it meets the Columbia because we are seeing sockeye salmon impacted by hot water, growing lesions on their bodies and dying hundreds of miles away from where they should be spawning,” said Miles Johnson, senior attorney for Columbia Riverkeeper, which organized a Salmon Vigil on the shore of the river in support of Yakama Nation representatives.

“The Columbia and Snake rivers are too hot for salmon and steelhead to migrate safely upstream,” Johnson told a group gathered on shore. “They are too hot because the dams have made them too hot, and with climate change that is pushing our salmon over the brink of extinction.”

Gerald Lewis, Yakama Nation council leader and chair of the Yakama Nation’s Fish and Wildlife Committee, said it was critical those living in the Gorge be aware of the situation and call for a change in how the river is managed.

Lewis said current water conditions are similar to those of 2015, which saw major die offs of sockeye salmon, which migrate upstream in the summer, as well as sturgeon and other fish living in the river year round.

“We come together here to talk about this issue and bring it to light, because we all know what is causing this. It is the dams impeding that water and making lakes behind them, slowing that water down and making that water extremely warm so that our fish are not surviving like they should be,” Lewis said.

The solution is also known, Lewis added. In discussions with the U.S. Army Corp of Engineers, increased summer flows through the dams have been discussed, he said. “We have dam spills for the little ones, as they migrate out to the ocean. Why can’t we have spills for our adults, that are trying to get back upstream to their home grounds where they go to spawn?”

Jeremy Takala, also a member of the Yakama Nation’s Fish and Wildlife Committee and former chair of the Columbia River Inter-Tribal Fish Commission, said the hydro infrastructure on the river had always had a negative impact on fisheries, including the summer run of sockeye.

“Many of us have our children here, our families here. What is it going to look like when they become your age? When maybe they become an elder? I had a grandfather who was able to fish Celilo Falls, and he said to me, ‘When you become my age, there probably won’t be any salmon left.’

“We had runs of 15 to 17 million fish, before the dams. Now, we are barely reaching 1 million. To see that dramatic change is very heartbreaking because of the connection our people here have with these first foods, like these sockeye.

“These fish and wildlife they were here first, they tell the story, they bring life and medicine and food for our people. We know what to do. We need to take action now for our sockeye, our sturgeon, our anadromous and residential fish. We can’t wait any longer. We see it, those of us that live in the Gorge.

“We are all in this situation, it’s not just the Native Americans, the Yakama Nation, the Columbia River people, the Indian people, it is all of us. It is everyone that has to take action.”

Donella Miller is program manager for the Yakama Nations Fisheries Department. As a professional biologist, she is working to fold scientific method and modern fish management into the traditional values and teachings she learned as a child.

“Yes, we are the salmon people. But its not just about the salmon, it’s about the environment. The salmon are indicators of a clean and healthy ecosystem.”

She said tribal ecological knowledge and values, passed from generation to generation, provides a solid foundation for the work she and her department are engaged in as biologists working to restore the river. “The Yakama Nation is at the forefront of moving projects forward and taking a stand for the river’s ecosystem, working for a healthy environment,” she said. Her team includes both tribal and non-tribal biologists, and all have that understanding, that same care and respect for the ecosystem, she said.

She said plans need to be made for a future without dams and other major changes to the hydro system. “A lot of the burdens of our society lie on the backs of the salmon, and those who depend on them. It’s not just tribal members, it’s everyone. We all drink water, we are all beings of the same earth. We should share that common appreciation of what sustains us all,” she said.

Currently, the program works within the existing system, with flow regulations and changes in fish passage structures and other components of the system to increase fish survival.

“These are large, complicated systems, but we keep working to see that they are managed in appropriate ways,” she explained. “It benefits all people in our region.”

“A vigil is a sad moment, because you are recognizing something terrible happened,” said Davis Washines, government relations coordinator for the Yakama Nation. “Just upstream, at the small river’s headwaters, an underwater camera displays dead and dying salmon on a computer screen in real time. Those fish still living can be seen with lesions on their sides. Others have already succumbed.”

It is not the first tragedy on the Columbia River Washines has seen. “You have heard of Celilo Falls,” he said. “That was one of the most tragic events. For thousands of years, the creator had blessed us with a place, and now all we have are the memories.”

The falls were inundated by the waters behind The Dalles Dam in 1956.

“Enough is enough. We want to draw the line here,” he said, scratching a line with his staff on the gravel bank of the Little White Salmon. “Today you see our children and grandchildren here with us. They are relying on us.”

“Many years ago the pacific lamprey was in danger here,” Washines said. “Through awareness and the work of fisheries staff from the tribes, efforts were made to bring those sacred food back. Today, in reports from our biologists, there are Pacific lamprey migrating up the White Salmon River! That would not have happened if we had not taken Condit dam out.

“What more testimony do you need of the damage that dams cause?” he asked. “Salmon have been here for hundreds of millions of years, are we going to be the generation that sees them go extinct? Is that the legacy we want for our generation?”

Giulia C.S. Good Stefani with the National Resources Defense Council and a resident of Mosier, noted that the warming environment, salmon die off and wildfires being experienced in the Gorge are all connected. “It’s all part of the unnatural system we have created here, and it can all be fixed,” she said. “This is a project we can all work together with, but it is also a failure of our federal leadership. We need congressional appropriations, we need money put in the right places. We need action on these dams.”

Stefani’s work is focused on the removal of four dams on the lower Snake River, but those dams have a huge impact downstream on the Columbia, she said.

“It is over 70 degrees in all of these reservoirs, the problem is up and down the river, and the problem is bigger than the dams. But if you take out the lower Snake River dams, modeling by Columbia Riverkeeper suggests you will not have 70 degree water for months at a time, but instead you have hotter water on hotter days, in spikes, and then the water cools back off.

“The salmon can survive (shorter spikes of high temperatures), these are amazingly resilient animals.

“A lot of mistakes have been made, but there is a window of opportunity right now for change if we can get our Congressional leaders and our federal agencies to listen,” Stefani said.

“We need help, the salmon need help,” reiterated Johnson. “We need Sen. Murray, Sen. Cantwell, Sen. Wyden and Sen. Merkley to fix this problem. We can’t fix it ourselves. We desperately need leadership, we have no more room for compromise,” he said.

How to live sustainably: An overview of ‘The Doughnut Economic Theory’