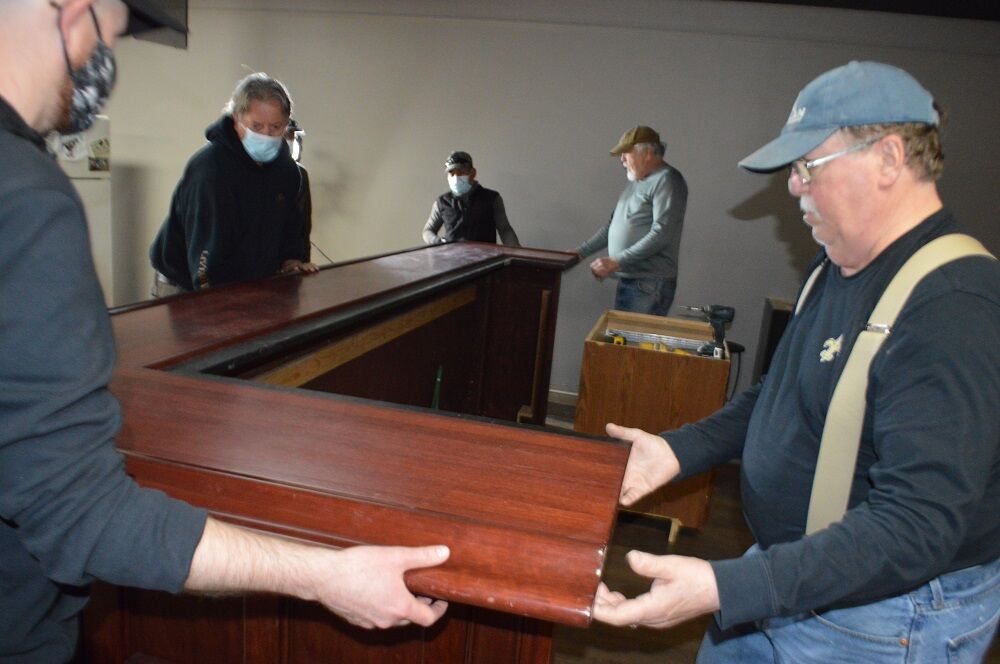 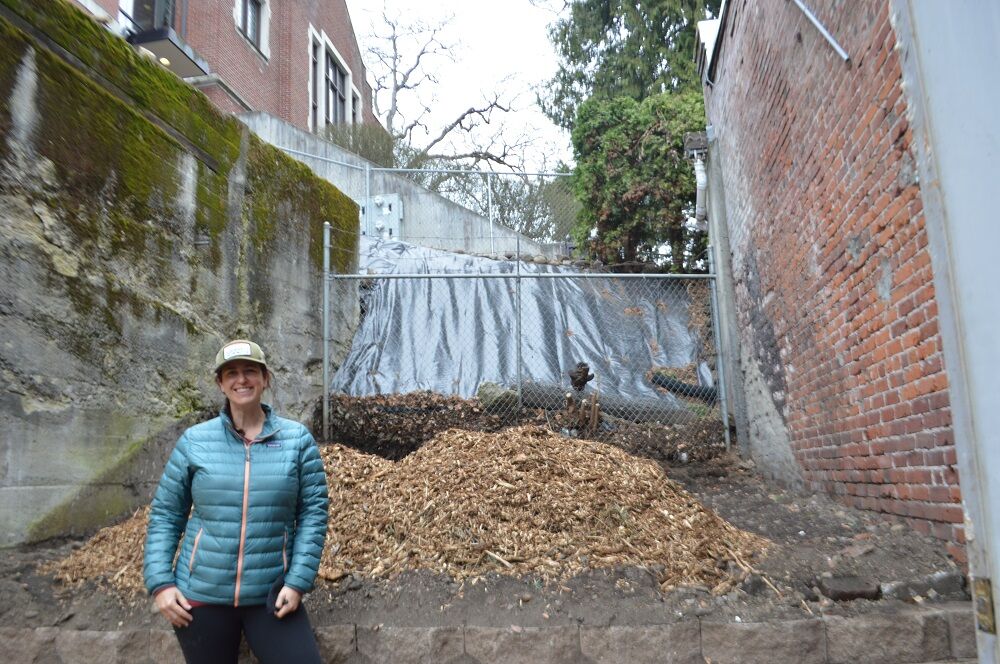 “Our oasis,” tasting room manager Sierra Wright said of the back garden, which will have a new deck, seating and pagoda. Overhead is the north wall of Hood River County Library. 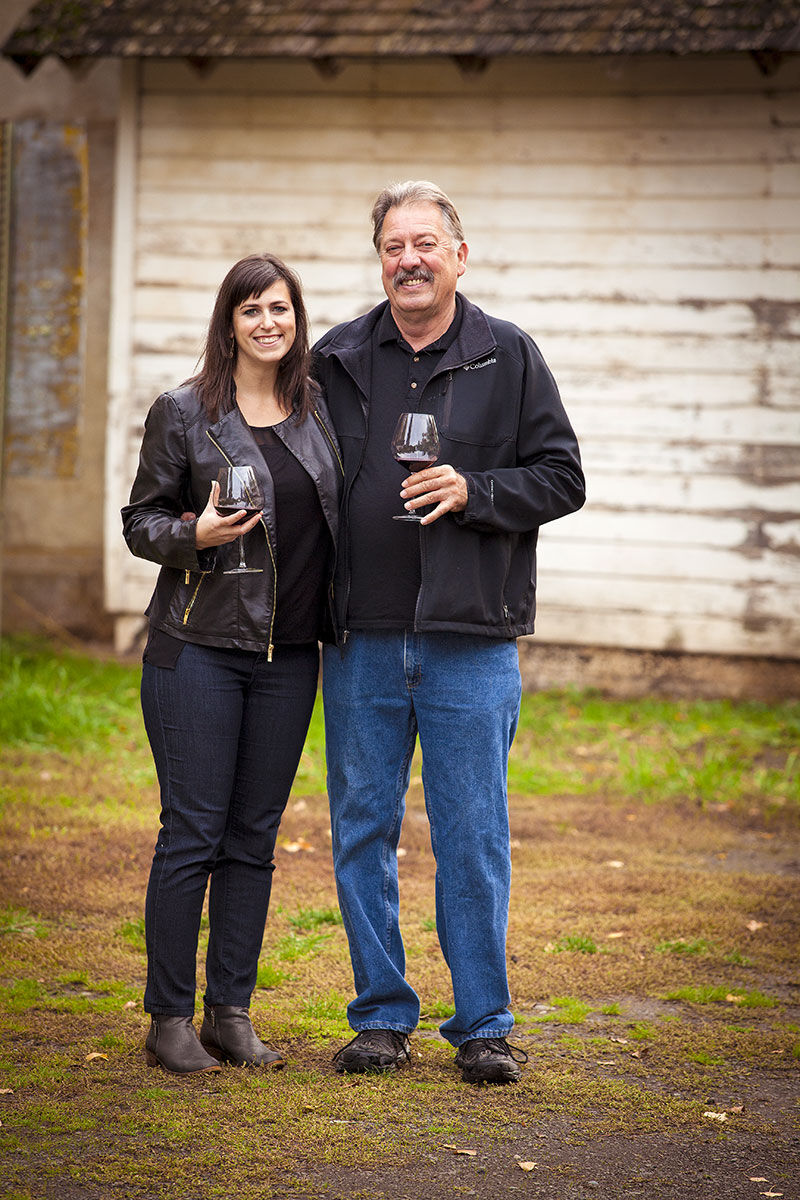 The Pines’ charms continue to unfold. One of the Gorge’s charter wineries starts a new chapter with the move in recent weeks to a new tasting room location, at 415 Oak St., set to open in April.

“These tendrils will grab a hold, they’re pretty strong,” vintner Lonnie Wright says as he shows techniques for developing new and repeated growth for grape vines, in a 2009 The Pines documentary directed by Mariah Dunn. His words also say something about the resilience of the winery, based south of The Dalles on the scenic and historic property that bears its name.

After eight years in its location at 202 Cascade Avenue and seven years before that at Second and State, the tasting room’s move to Oak Street saw firm manifestation on March 24 when a crew moved the bar, made of dark cherry wood, into its new spot. Moving base and top was a five-man operation.

Complementing the bar are a newly-exposed brick wall on the west, and the paneling on the south wall, left unchanged from the previous occupant of the space, Hood River Jewelers, which vacated in January.

“I once got the best compliment, when a guy stood here and told me he just knew the bar is an antique. I told him ‘two years ago it was a tree’,” said Mick Schneider of Stevenson — who made the bar eight years ago.

Wiring, some drywall finishing, and final permits are mainly what stand between The Pines and the hoped-for April 3 reopening.

“We’ve been wanting to be on Oak Street from the beginning but it never really lined up until now,” said Sierra Wright, Lonnie’s daughter and tasting room manager. The State Street site (now Pure Stoke, formerly Second Wind Sports) featured a large bar and had music from the start, first as a simple jam session with Kerry Williams, the late Rick Hulett and other musicians and developing into a set of casual concerts that drew 100 or more people at a time.

“That’s one of the things we’ve kind of known for and we really want to bring it back. Everyone wants it,” Lonnie said.

Music, with smaller ensembles remained a mainstay with the move to Cascade. People would often fill the sidewalk outside the roll-up doors on summer evenings. As with all venues, the music faded about a year ago (the “tasting room” has done take-out only for the past year) but The Pines is primed to revive it, with greater guest spacing — and plexiglass between performers and guests.

The Cascade space was much smaller than the first one on State. The Oak Street venue is somewhere in between.

“We’re Goldilocks, basically. This is jussst right,” said Sierra, who 16 years ago convinced her father to open a tasting room.

“It’s your baby, just don’t ever ask me to work behind the bar,” Sierra quoted Lonnie in the documentary.

The Wrights said last week that the advantage is not so much the increased square footage but the layout and how it is situated.

“This is a much larger main room, which is what we need for seating,” she said.

“The shape of the place fits us a lot better, especially when you have to take COVID into account,” Lonnie said. “The other place the bar was the centerpiece and close to everything, and it was two rooms so the people in the back room, unless we were conducting a tasting, felt like left out when it came to the music.

“It’s going to be nice to have a bigger room.”

Now there is no secondary, private room like at the Cascade location, but go down the back hallway, past the office and storage and restrooms, then take a right out the back door and ...

The back garden will feature sheltered seating and a firepit, and an upper deck with pagoda.

“This was a bit of a sight, with thick blackberry bushes. a tree and a huge pile of rubbish,” she said.

The garden is framed by rough concrete retaining walls, and the north side of the Hood River Library looming overhead.

“I like the charm. I like all the moss and the cracks and it shows off that it’s been here awhile and seen some things,” Sierra said. “That’s why we exposed the brick wall on the interior. I love the history in these buildings, and I think in the 1960s and 1970s a lot of it got covered up and now we’re trying to unveil a little more of the history of downtown.”

There’s a great deal of history to The Pines, at the tasting room that’s the urban base of a vineyard where Wright first started working, later buying the property and raising his family.

In 1982, Wright purchased the Zinfandel vineyard, believed to be the first in the Northwest, planted in the 1880s but abandoned in 1964. When he encountered them they were all but dead, but he revived them and, with new plantings, developed the grapes he now sells to over 20 wineries. In 2001 he decided to “keep some of the grapes for myself” and created The Pines 1852 winery on the same land planted with Zinfandel about 140 years ago by Italian immigrant Louis Comini, He can point to the oldest of the old vines on the same hillside today, and said while he is not sure when they were planted (nor if Comini brought the cuttings from California or Italy), the vines are shown in a 1911 photo of the hillside.

He expanded The Pines Estate Vineyard over the years by planting a new block of Zinfandel in 1987, Merlot in 1991 and 1993 and Syrah in 1994. About the time the tasting room opens, the 2018 Syrah will be ready to uncork.

In 2002 the Sheldon Ridge fire threatened the structures and the vineyard, and Lonnie and Sierra filled a wine tank with water and used it to fend off the blaze, saving the vines.

Wright said in the 2009 documentary that, “What we do is sustainable farming, but sustainable is not only our practices on the land and with the plants but also concerning our employees and people trying the wine out, too.”