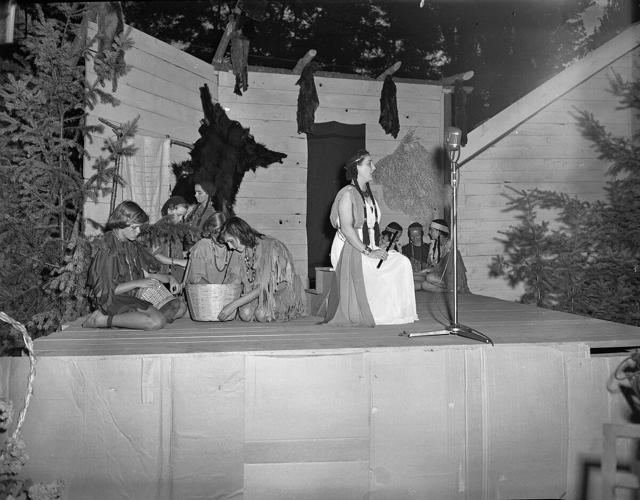 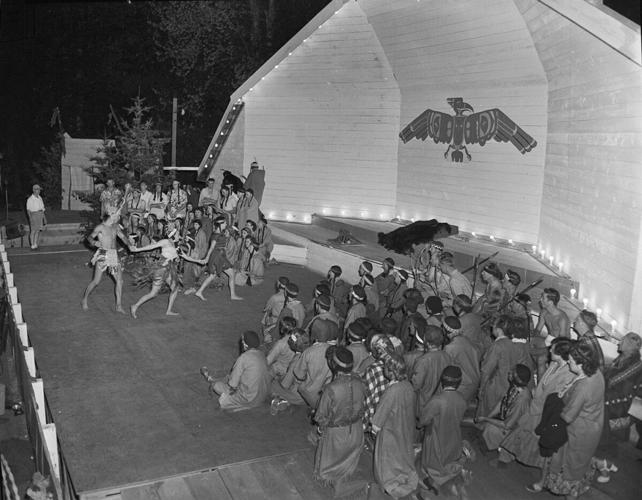 Hood River performs “Bridge of the Gods Opera” at festival green, Hood River, Aug. 2, 1951, in this photograph by George Lindsay of The Dalles Optimist. 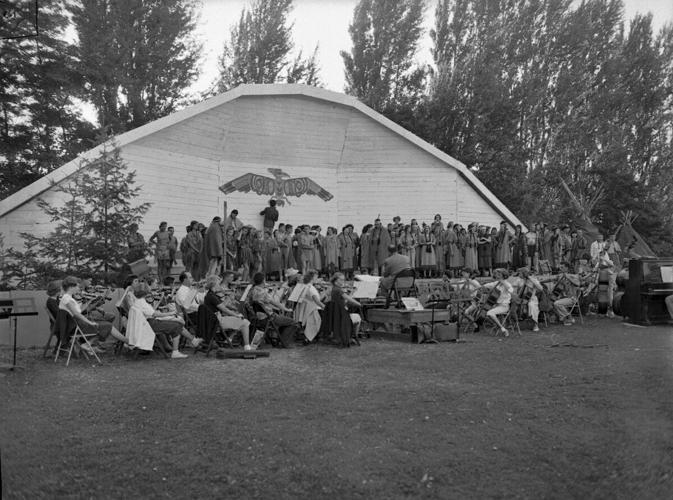 Hood River performs “Bridge of the Gods Opera” at festival green, Hood River, Aug. 2, 1951, in this photograph by George Lindsay of The Dalles Optimist.

A “Mickie Says” cartoon in the Sept. 22, 1922, Hood River News, asks patrons owing money to the newspaper to pay up.

A big crowd assembled at Pine Grove Grange Hall last Monday evening to hear state politicians discuss some of the problems which are being used as planks in the political platforms this season. Among those present were a number of residents of this city, and the debate was under the presidency of A.L. Mason. The speakers were Senator Walter M. Pierce, candidate for governor on the democratic ticket, and Senator W.T. Vinton, representing the Oregon republican organization. — Hood River News

Foundation Work At Tie Plant Difficult — It may seem like a simple matter to dig a hole, 14 or 15 feet deep, and fill it with concrete. Probably it is, if the hole doesn’t happen to be in sand, which caves in as fast as it is dug. That is one of the problems being worked out by Hedges & Huls, contractors who are building the tie-treating plant in The Dalles for the O.-W. R & N. company. The contract calls for sinking 154 concrete foundations to bedrock. The buildings are being constructed on property north of the railroad shops. — The Dalles Daily Chronicle

One of the most industrious of Hood River’s War Relief workers is Mrs. William H. Goodenough Sr., who has received special recognition from headquarters in Portland for the quantity and quality of her work for the victims of war. Mrs. Goodenough has crocheted fifty or more afghans, which are used in a variety of ways, but principally as covers for children’s cribs and as throws for convalescent soldiers and sailors. As all are generously proportioned, as well as exquisitely made and artistically fashioned, it takes little imagination to envisage the endless hours and loving interest poured into their creation. — Hood River News

City Agrees To Improve Site On Waterfront — An agreement under which The Dalles will get a barge-building plant, employing a minimum of 250 men, was consummated last night at a meeting attended by representatives of all civic agencies in The Dalles. The plant, a branch of the Pointer-Willamette company, will be located on city waterfront property, immediately west of town. Leveling of the site, which will be leased to the barge company, is expected to start at once. — The Dalles Daily Chronicle

A raging fire, breaking out in the early morning hours of Wednesday, completely destroyed an old building, a landmark at Windmaster Corner that has recently housed a trailer-construction company. Destroyed in the blaze, the cause of which is still undetermined, was one almost completed trailer, the shell of another, and numerous pieces of equipment. — Hood River News

The Oregon Highway Commission has approved the by-pass route on the Dufur section of The Dalles-California Highway, United Press International reported today from Burns. This was interpreted to mean that the route cutting through the northeast corner of Dufur, then by-passing most of the town to rejoin the present alignment to the east, is the one that will be used. — The Dalles Daily Chronicle

About 350 marijuana plants ranging in height from 16 inches to six and a half feet tall were seized from a heavily wooded area just northwest of the old Dee fish hatchery last week by county and city authorities. No arrests had been made as of Tuesday this week, but Sheriff Bob Lynch said his force was on the lookout for two prime suspects — occupants of a nearby home. Seized along with 351 plants were assorted pieces of paraphernalia. — Hood River News

RAJNEESHPURAM — The first issue of the Rajneesh Times was published Sept. 3 and is an eight-page tabloid section. The weekly publication has a subscription price of $18 per year in the U.S. and lists editorial and business offices in Madras. The lead article is about a series of public hearings on adoption of a comprehensive plan for the city. Another article notes the correct legal name for the ranch in which the city is located as “Rancho Rajneesh.” — The Dalles Daily Chronicle

The inside of the White Salmon Post Office will be undergoing some changes in the next few weeks, including the installation of new post office boxes and a remodel of the front doors and lobby area. — White Salmon Enterprise

A suspicious mail parcel led to a quarantine of the Hood River Post Office for more than three hours on Friday afternoon. Although HAZMAT specialists from Gresham found the package to contain only a dead trout, City Police Chief Tony Dirks said what appeared to have been intended as a private prank ended up costing the public thousands of dollars. “Two years ago, we would have just cut the package open and found the fish but after Sept. 11 we learned to take extra precautions because the ramifications could be devastating,” Dirks said. — Hood River News

Property owners are fuming — and one is even considering suing — over a proposed city road project in the port industrial area they say is both expensive and unneeded. At issue is a plan to improve a mile-long u-shaped section of road that starts at Webber and West First Street, goes east to Terminal Way, north to Bargeway Road and west to River Road. — The Dalles Chronicle

The Bingen Fire Department is beginning to run short of volunteer firefighters. According to Mayor Brian Prigel, a recruitment effort to address the situation will be launched sometime this fall. Prigel said another six firefighters on board would resolve the situation. Retirements, as well as growth in population that commutes daily, were cited as main reasons for the decline. — White Salmon Enterprise

Help To Work In Orchards

Growers Grateful To Their Town Neighbors

Grateful to businessmen and the many other town people for their sustained efforts to help in the harvesting of the Anjou and Bosc pear crops of the valley, a number of fruitgrowers, recognizing the heavy burden of closing all stores in town, as was done Thursday of last week, imposes upon their town neighbors, have suggested that businessmen release as many of their employees as may be practicable to engage in fruit picking during the season.

It is hoped that, by following this procedure, the help available from town, coupled with professional pickers which are expected to come to the valley in the near future, at least the greater percentage of both pear and apple crops may be harvested and without any further closing down of stores in town.

R.E. Steele, secretary of the chamber of commerce, suggests that store owners who make arrangements with their clerks to work in orchards a couple or more afternoons each week, notify him, so that they may go to orchards in which their assistance is needed.

In addition to putting in a full day in valley orchards Thursday of last week, many townfolks, both from business houses and the residential section, were out in the orchards again last Sunday, and it is estimated that many thousands of boxes of Anjou pears were picked by this help, some of whom proved themselves to be excellent pickers. — Sept. 25, 1942, Hood River News

KLAMATH FALLS, AP — A patriotism riot against members of a religious sect left a multitude of black eyes and tender noses in Klamath Falls today.

Townspeople, irked by three days of pamphleteering by 400 convention delegates of the Jehovah’s witnesses, the sect that refuses on religious grounds to salute the flag, surrounded the witnesses’ convention building yesterday.

They set up a war bond booth and called to witnesses to make purchases. Sound equipment blared patriotic music. None of the sect members responded.

Small at first, the crowd grew to 1,000. A rock was thrown at the building. Windows shattered and a few stink bombs and rotten eggs followed.

Part of the crowd rushed an entrance. Sect members met them with sticks. After 15 minutes of battle, the crowd retreated. Minor injuries were numerous on both sides, but nothing serious was reported.

The crowd kept the hall surrounded, and eventually a few witnesses filed out, bearing pamphlets, which promptly were seized and destroyed in a street bonfire. Witnesses’ banners next were torn down.

Police efforts were unavailing, and it was only after an appeal from Governor Charles A. Sprague in Salem that the crowd dispersed.