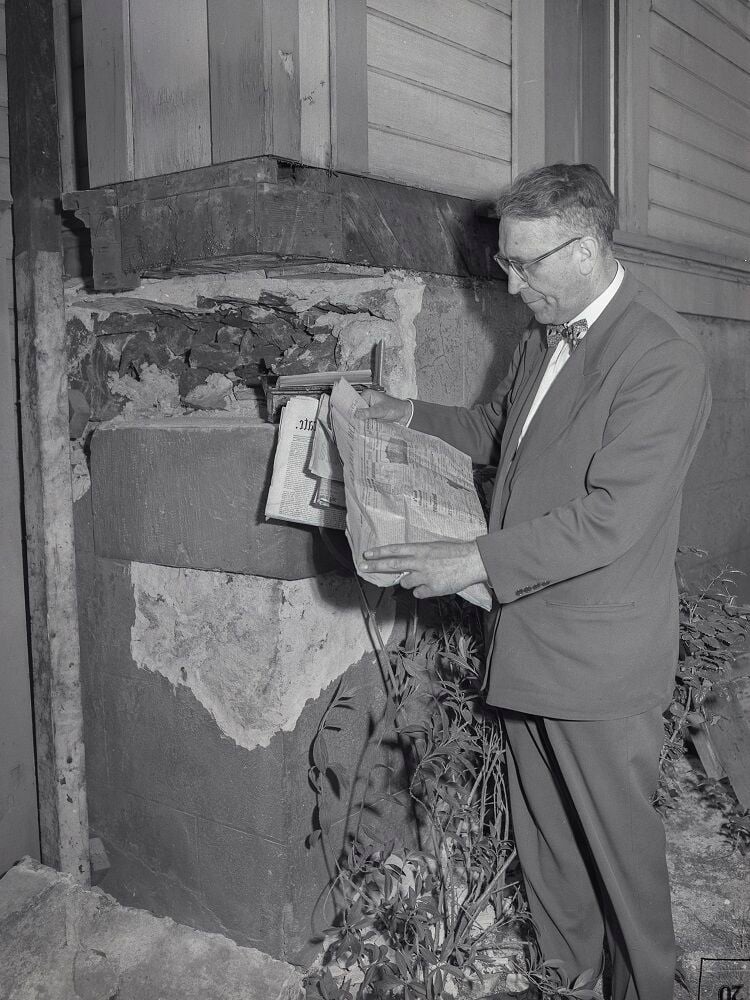 Items from the cornerstone of the old Methodist Church are removed after completion of a new church building May 9, 1953. Image was scanned from a black and white, 4-inch by 5-inch negative. 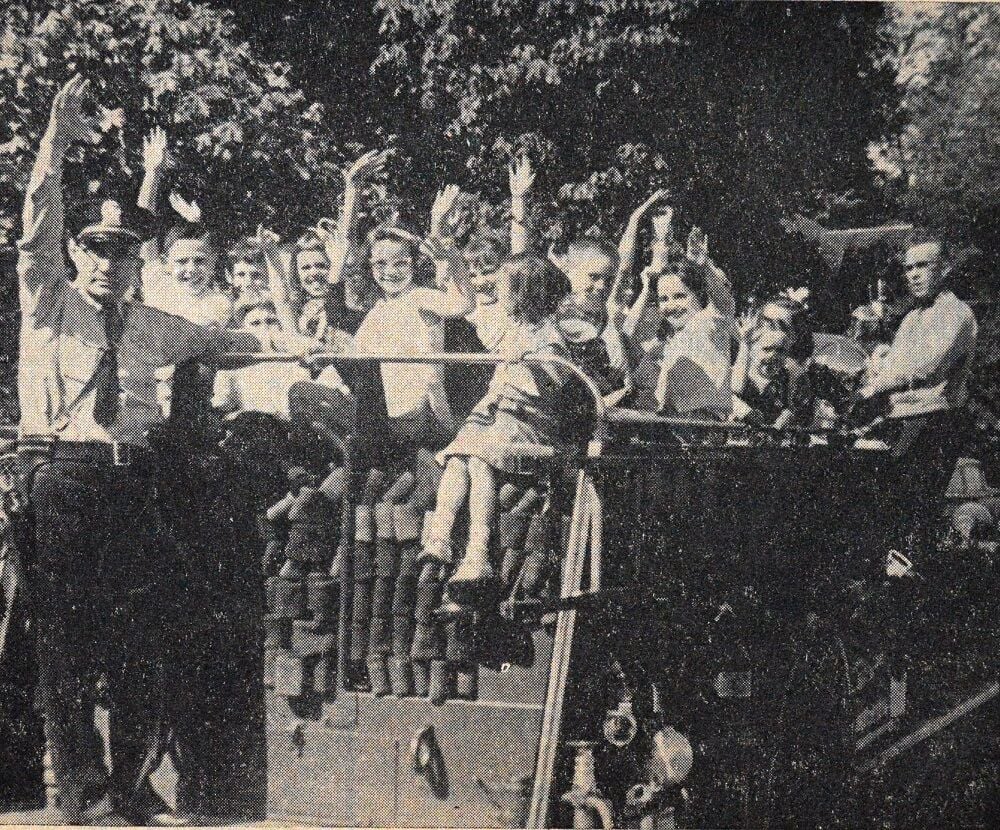 SCHOOL’S OUT! — These Coe primary students received no graduation ceremonies or diplomas this week, but the traditional end of school ride aboard the Hood River Fire Department’s gleaming red trucks was obviously a more delightful reward. Aboard the ladder truck to help the youngsters on and off were Firemen J.B. Coffey, left, and Police Chief Francis Woolston, right.

Another landmark in the development of Hood River County will be available for all to see when the Columbia Gorge Hotel, built by Simon Benson and to be operated by Henri Thiele, will be open to the public. It is expected that the hotel would be ready to receive guests this weekend, but it was decided to wait a few days and have everything in readiness. One of the big features of this hotel will later be its beautiful grounds. Today, the surroundings do not harmonize with the hansom building but they will soon transform into a park worth of the finest tourist hotel. — Hood River News

Barring the possibility of a hot east wind, the dread of all eastern Oregon wheat ranchers, Wasco county will this year have one of the biggest harvests of wheat in its history, according to E. R. Jackman, agricultural agent, who has just completed a general survey of the situation. The county’s 1921 crop will probably yield 1,400,000 bushels of wheat, as compared to 1,200,000 bushels grown last year, Jackman estimates. A hot east wind will materially reduce this estimate by causing the wheat to burn. — The Dalles Daily Chronicle

The board of directors of the County School Unit System, Wednesday night of last week, awarded the contract for the building of the new grade school at Frankton to a Hood River firm of contractors, Bald-win & Wheir. The bid was $34,634.97, $2,634.97 in excess of the sum provided for in the recent bond election. Work is to start immediately, it is stated. — Hood River News

Residents in this area may obtain driver’s license renewals at temporary offices established at the city hall in The Dalles, according to an announcement from the office of Earl Snell, secretary of state. The office will be open here daily beginning Thursday, June 12, from 9 a.m. to 5 p.m., for the convenience of local residents who wish to renew their driver’s license, due before July 1 of this year ... Persons who hold current licenses and are under 70 years of age may renew their licenses by filling out the application form and paying the fee of $1.50, it was said. — The Dalles Daily Chronicle

Fresh off their successful assault on a townful of cracked sidewalks, Hood River City Councilmen claimed Monday they may have to use the same tough tactics to clear city vacant lots and cubing areas of unsightly weeds. The council membership decided to make a public plea this week, asking all property owners check their vacant lot areas and curbing areas. They backed that up with the reminder that a city ordinance forbids weeds that become a “nuisance” in those areas. — Hood River News

Base price for cherry picking in The Dalles area during the coming harvest season will be four cents a pound, the same as in 1960. — The Dalles Daily Chronicle

Eugenio “Pepe” Quintanilla became the first non-pitcher in Hood River Valley baseball history to be named to the Oregon Journal’s All State team. The Journal revealed its picks for the first two teams and honorable mention Saturday, and Quintanilla was one of 16 players from around the state to be honored as a first team selection. — Hood River News

Wasco County should capitalize on the fact both the Lewis and Clark and Oregon Trail come through The Dalles. That is the message from Dr. Eldon Chuinard, a physician from Portland who has spent his life researching and writing about the famed trail blazers. — The Dalles Daily Chronicle

A year and a half of mental and physical training helped 10-year-old Chase Duback of Trout Lake take third place in the Oregon State Karate Championships in Portland. Competing in the Peewee (10 and under) division at the Memorial Coliseum, Chase won four of five matches in free-fighting competition against competitors from around the northwest. The competition was his first. Chase is a first-degree blue belt in tai-kwon-do who will be trying for the purple belt soon. He already has progressed through the yellow and second-degree blue belts as a student of Gary Muma of Hood River. In the semifinal round, Chase faced a brown belt and lost in sudden death overtime. “I was really pleased with his performance,” Muma said. “Chase is really cooperative and really dedicated.” Chase enjoys his lessons and is looking forward to progressing to more advanced levels. “I like to free-fight,” he said. “I like to do things that are exciting.” — White Salmon Enterprise

The City of Cascade Locks is undergoing a face lift to attract new businesses and improve the quality of life for its residents. “We want to spruce up the first impression visitors get when they drive into Cascade Locks,” said Robert Willoughby, city manager. The downtown plaza was revamped by the construction of a terraced rock wall that is landscape with flowering plants and shrubs. The city spent $20,000 from its tourism coffers for that work, which accompanies a $60,000 state-funded repaving of the sidewalk at the eastern end of town and fabrication of a decorative retaining wall. — Hood River News

Return on investment, or lack thereof, was one concern shared during a discussion at Wednesday’s Wasco County Court session to a potential golf course on property at The Dalles Municipal Airport in Dallesport. — The Dalles Chronicle

The final approval for PacifiCorp to remove the Condit Dam, located on the White Salmon River, three miles upstream from the river’s confluence with the Columbia River, is waiting on an OK from the Federal Energy Regulatory Commission (FERC). That was expected to be a formality, but now process appears to be snagged a “procedural problem.” After an informal visit to the dam by several members of the FERC staff on May 16, representatives of the agency unexpectedly raised some new issues regarding the agreement PacifiCorp signed to remove the dam. According to one observer, the problem arose because the utility was originally asking for a license to renew operating the dam as an electrical generating facility. Later, they signed a deal to remove the dam altogether. PacifiCorp spokesperson Dave Kvamme said the current technicality would not change anything in the utility’s plan to remove the dam. — White Salmon Enterprise

Storms in Eastern Oregon last weekend and a heatwave over the entire watershed of the Columbia River resulted in a rapid rise of floodwater and the Columbia is now at its highest point here in several years.

During the first rise, the Columbia remained fairly clear, but is now very muddy since the stormwater began to run into it from the various tributaries further east.

On Monday, Harry Munemato, who has the big truck garden on the Button place east of the city, surrendered his farm to floodwater after pumping continuously to keep out seepage for nearly two weeks. It is believed that a gopher opened up a way for an inrush of water sometime during Sunday night and on Monday, the entire tract was under water. Much sympathy is expressed for this unfortunate farmer, inasmuch as it is not the first crop of early vegetables he has lost through flood.

On Tuesday night, the shack below the depot had to be vacated owing to the rising waters and the transients who had been occupying it were forced to camp out.

The White Salmon auto ferry is now landing at the foot of the slope below the depot. — Hood River News, June 10, 1921

PORTLAND (UPI) — Dikes along the Columbia River were reinforced today as the stream continued to inch upwards toward a crest that floodfighters hoped would not reach 25 feet. A herd of dairy cattle was moved from the Ridgeport Dairy in the Vancouver, Wash., area to the Meadowland Dairy southeast of Portland as the Columbia encircled the barn of dairyman Jonas Kommings. A dike nine miles north of Vancouver was being reinforced. A Clark County road department spokesman said anything over a 24.5 foot level would present a critical situation and if the river got to 25 feet “everything would break loose.”

The Columbia reached 24 feet in the area Thursday and was forecast to rise to 24.7 Sunday. Many dikes from Vancouver to the Pacific give protection to 30 feet.

Water spilled into a low 200-acre grazing field north of Burlington on the Lower Columbia River Highway. Several cattle had to be moved to higher ground. — The Dalles Chronicle, June 9, 1961

Jack Brown Tumbles Into Columbia, Clothes and All

Jack Brown, member of The Dalles fire department, proved to the eminent satisfaction of his mates Saturday afternoon that he may be an A-1 land-lubber but that wen it comes to water . . . bring on the inhalator.

Brown trekked down to the foot of Union Street Saturday to see a couple of boys on a boat. The boat was somewhat beyond the reaches of the shoreline so Brown started a tight-rope walk on a log. A wet, oil-soaked log, if you please.

All went well until Brown reached that portion of the log where the water was the deepest. Then “Brownie” fell in, thoroughly dousing his clothes, self and enthusiasm.

His bedraggled appearance at the fire station not long after brought many expressions of regret and concern from his cohorts — no doubt. — The Dalles Daily Chronicle, June 6, 1941

Portland Has Near Riot Over Cheap Berries

Relief Agencies To Be Investigated