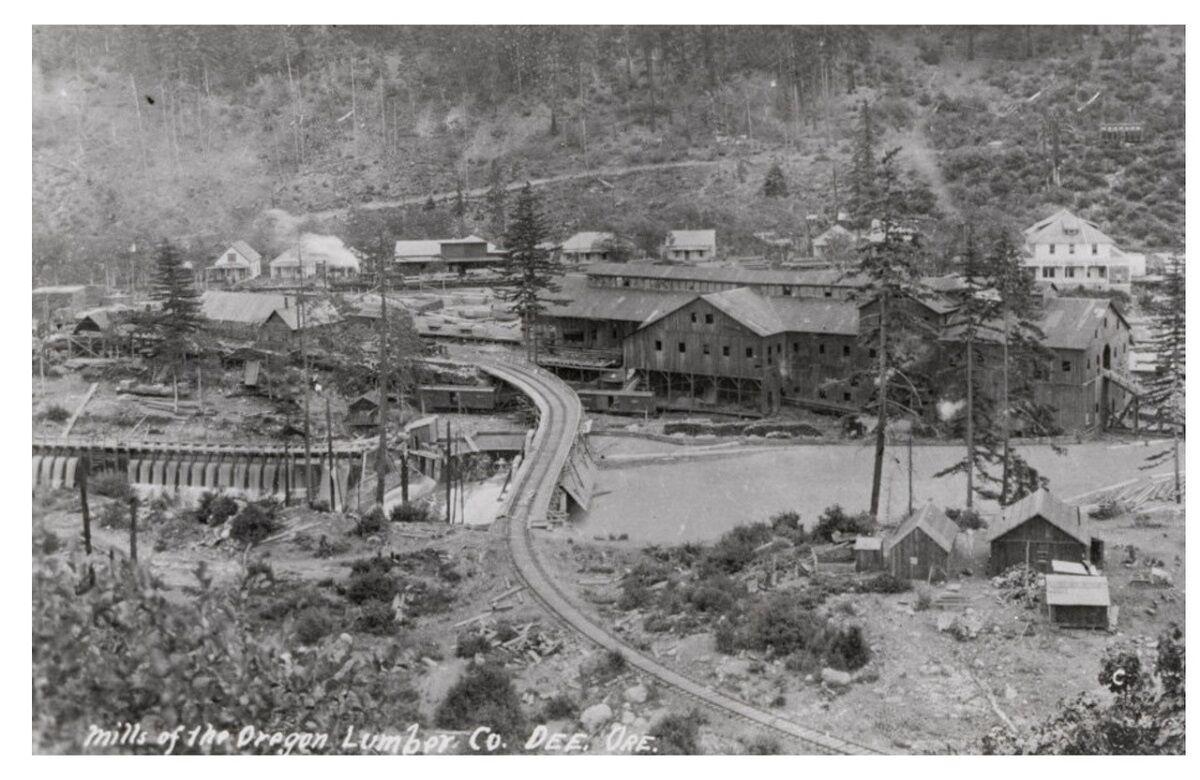 Oregon Lumber Company built Dee Mill in 1906. A two-story hotel sat on the property (upper right corner) until the mill town was dismantled in the 1950s. Most of the mill burned in 1996. 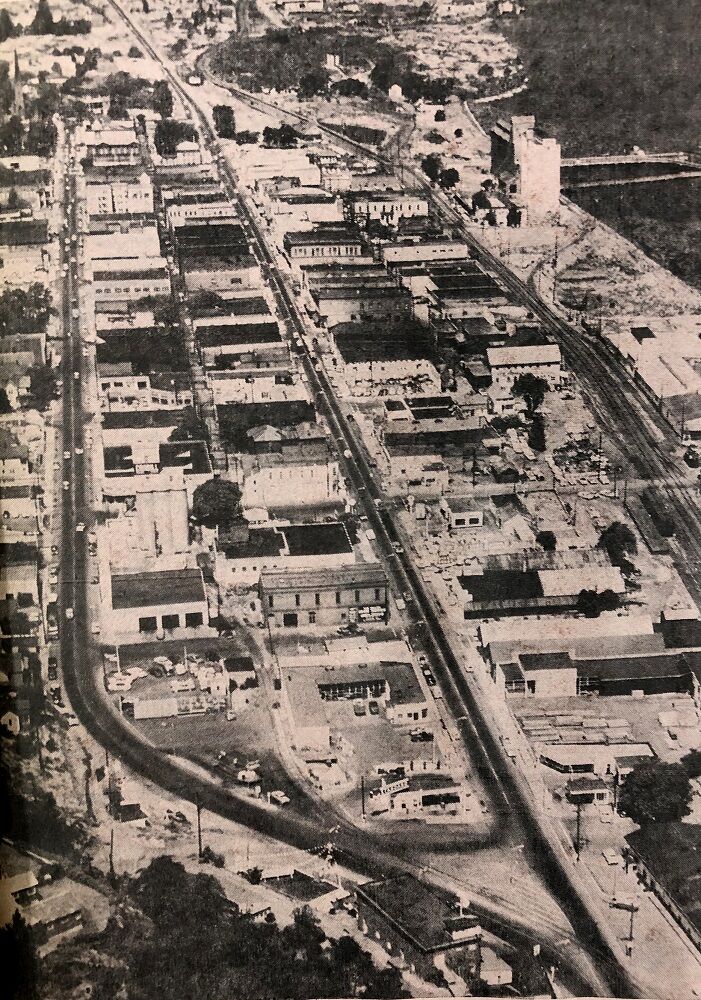 Downtown The Dalles main streets, paralleling the Columbia River and the Union Pacific Railroad tracks, are shown in this aerial photograph by Mell Olmstead, looking west — or downstream. Second Street, the westbound arterial, is on the right, flanked by rail and river, with the Port of The Dalles dock and grain elevator. On left is Third, eastbound arterial, with main business blocks between. 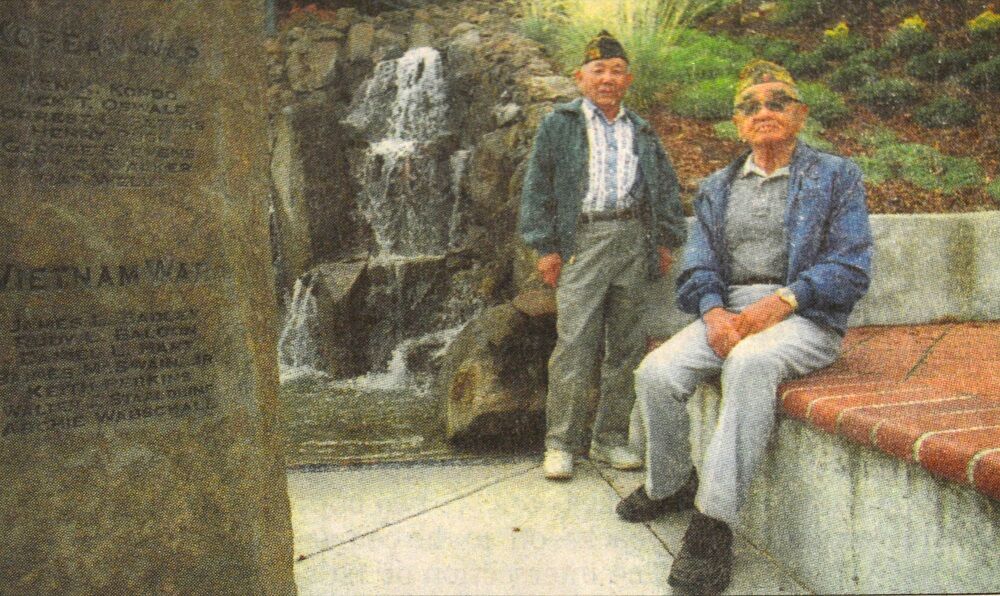 War heroes George Akiyama, standing, and Mamour “Mam” Noji are being honored for their meritorious service during World War II as grand marshals of the Fourth of July parade. Both men are natives of Hood River, whose families immigrated to the United States in the early 1900s to become orchardists. Noji and Akiyama said it was ironic that while they were drafted to serve in the armed forces of their birth country, their parents and siblings spent three years locked away in internment camps as war hysteria invaded the West Coast. Photo by Jim Selmor. 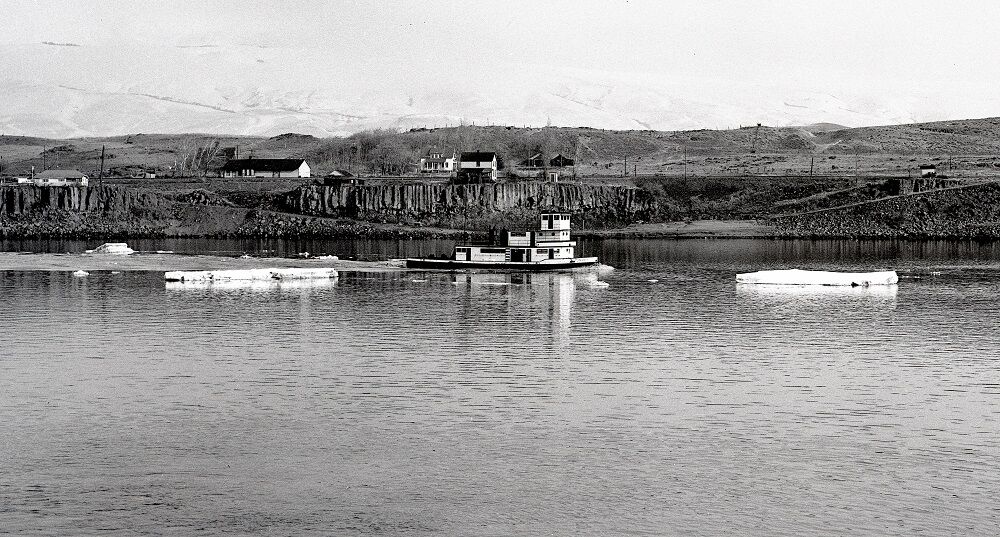 COOL HISTORY — The tug “Invader” passes behind a pair of icebergs in the Columbia River in January 1949 in The Dalles. Prior to the damming of the river, which raised the water temperature, ice frequently impacted the Mid-Columbia in the winter and early spring, judging from the photographs taken and published in the 1940s and earlier. 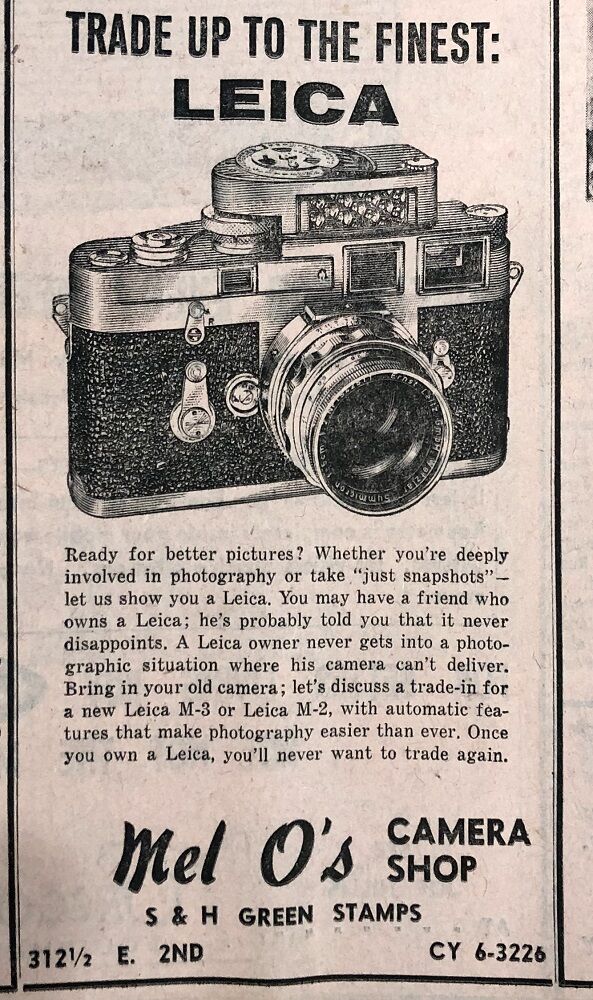 On Thursday of last week, the east slope of Mount Adams was the scene of another great avalanche. According to W.R. Wall, fire warden in the Simcoe mountains, the slide occurred in the extremely precipitous slope on the east side of the peak above the Big Muddy Basin, a huge natural bowl where the stream known as the Big Muddy originates. The forest ranger said the snow commenced moving near the top of the peak and that about a quarter of the entire area of the east side of the mountain had the appearance of being in motion. — Hood River News

For the purpose of opening bids for the construction of a new municipal auditorium, plans for which have already been drawn and accepted, a special meeting to the city council will be held tonight, in the council chamber. The first installment of the $114,000 voted in bonds will be sold at the regular meeting of the council on July 5. It is planned to sell the total bond issue in small lots, as the money is required. — The Dalles Daily Chronicle

The following proclamation is issued by Governor Charles A. Sprague and is of special interest to many in our valley: “Whereas the Selective Training and Service Act of 1940, approved Sept. 16, 1940, declares that it is imperative to increase and train the personnel of the armed forces of the United States and that in a free society the obligations and privileges of military service should be shared generally in accordance with a fair and just system of selective compulsory military training and service … The second registration under the Selective Training and Service Act of 1940 shall take place on Tuesday, the first day of July, 1941, between the hours of 7 a.m. and 9 p.m.” — Hood River News

Clear skies and rising temperatures brought “miles of smiles” to Dalles Breakfast club members today as they launched the “last lap” of preparations for this community’s ninth annual Fourth of July celebration, a coming event of Thursday, Friday and Saturday, July 3, 4 and 5. — The Dalles Daily Chronicle

It’s Cascade Locks and Hood River vs. Odell and Parkdale at the Fourth of July Barbecue Peewee exhibition game next week. Lucky valley boys who earn their places through a drawing will get to “show off” their Peewee baseball talents for a huge crowd during the Peewee All-Leagues baseball game that will be a feature of the public barbecue at Memorial Park July 4. From the 31 team rosters in the valley, names will be drawn to select the boys who’ll make up the 18-man rosters for the two squads. — Hood River News

Newest addition in The Dalles school system’s plant, which this fall is expected to accommodate some 3,000 students, is a wing now being constructed at the Junior High School. The new section is rising south of the present building and is scheduled to be put in use by the time classes start in the fall. — The Dalles Daily Chronicle

Cong. Jim Weaver was in The Dalles overnight and he pushed his proposed grain bank and timber export controls, but shied away from questions concerning his future in Oregon politics. He has been cited as a prospective Democratic candidate for governor, but today would not commit himself on that question.— The Dalles Daily Chronicle

Cherry growers aren’t claiming disaster yet, but this week’s unseasonably hefty rainfall amounted to a worrying surprise. “We were expecting rain, we just weren’t expecting the deluge,” said Flip Yasui of Willow Flat near Odell. “It was not just the amount but the duration. It came down for quite a while,” he said. “The damage has been done,” said Steve Castagnoli, Oregon State University Extension agent. “It’s more getting a handle on how much (damage) there really is out there. The lower valley Bing (crop) is probably lost, but as you go further up the valley, because the fruit is later, it may be less damage.” — Hood River News

In a victory for landowners over scenic preservation advocates, the Washington Supreme Court has overturned a congressionally empowered agency’s bid to remove a dream house from a bluff overlooking the spectacular Columbia River Gorge. The case stretches back to 1996, when Brian and Jody Bea applied to Skamania County to build on property his family had owned for generations. — The Dalles Chronicle

Oregon state police today held felony warrants for the arrest of a person or persons who stole a milk truck from the Foley Lakes Dairy yesterday.

The thief escaped with the vehicle — a 1949 delivery truck — between the hours of 4:30 and 10 p.m. Sunday, thus causing much inconvenience to operators of the dairy and delaying deliveries along the route this morning while private cars were being ushered into temporary service.

The truck was taken while the operators were away from the ranch, exact time not determined. It was red and white in color. — The Dalles Daily Chronicle, June 30, 1961

Leaving The Dalles at 10 o’clock Saturday night, two members of the Wasco county Sheriff’s posse — Vernon Campbell and Chester Arthur — traversed a 54-mile weekend route to Timberline Lodge and back as far as Hood River Meadows, it was learned here today.

The pair was joined at the Meadows Sunday morning by five other possemen and rode to Timberline that morning, returning to the Meadows in late afternoon where they loaded their steeds in trailers and wheeled into The Dalles late last night. Members of the latter “squad” included Archie Hovey, president of the posse, Norval Martin, Clifford Sparks, Harold Sexton and H.K. Hansen.

Tomorrow night at 6:30 the possemen will assemble at the riding academy to drill in preparation for their appearance in the Fourth of July parade on Friday of this week, it was announced today. — The Dalles Daily Chronicle, June 30, 1941

“We’ve got a situation that is quiet, but it could explode at any moment,” warns local veterinarian Dr. H.C. Morse, discussing the current rabies alarm in Oregon. Dr. Morse agreed this week with Health Nurse Emma Hanby that local pet owners should take advantage of the special inoculation clinics set up in Hood River, Odell and Cascade Locks to provide rabies shots for the pets at $1.25 each. First of the was held Wednesday at the Armory, 7-9 p.m. Tonight, another round of shots will be offered at the Mid Valley school in Odell. At Cascade Locks school, the shots will be offered Friday evening, June 30. To date, response to the urgings of state and local health officers about the seriousness of the rabies threat has failed to bring much of a rush for the inoculations, says Nurse Hanby. She reports a large amount of the special rabies vaccine is still on hand here. The current rabies scare resulted from discovery of the disease in several wild animals in Oregon this year. Last month, rabied bats were located in Wasco County, bringing the problem right to Hood River County’s door. — Hood River News, June 29, 1961

Rise Noted in Farm Cash Receipts So Far in ‘61

Head Of Prison In Iran Slain