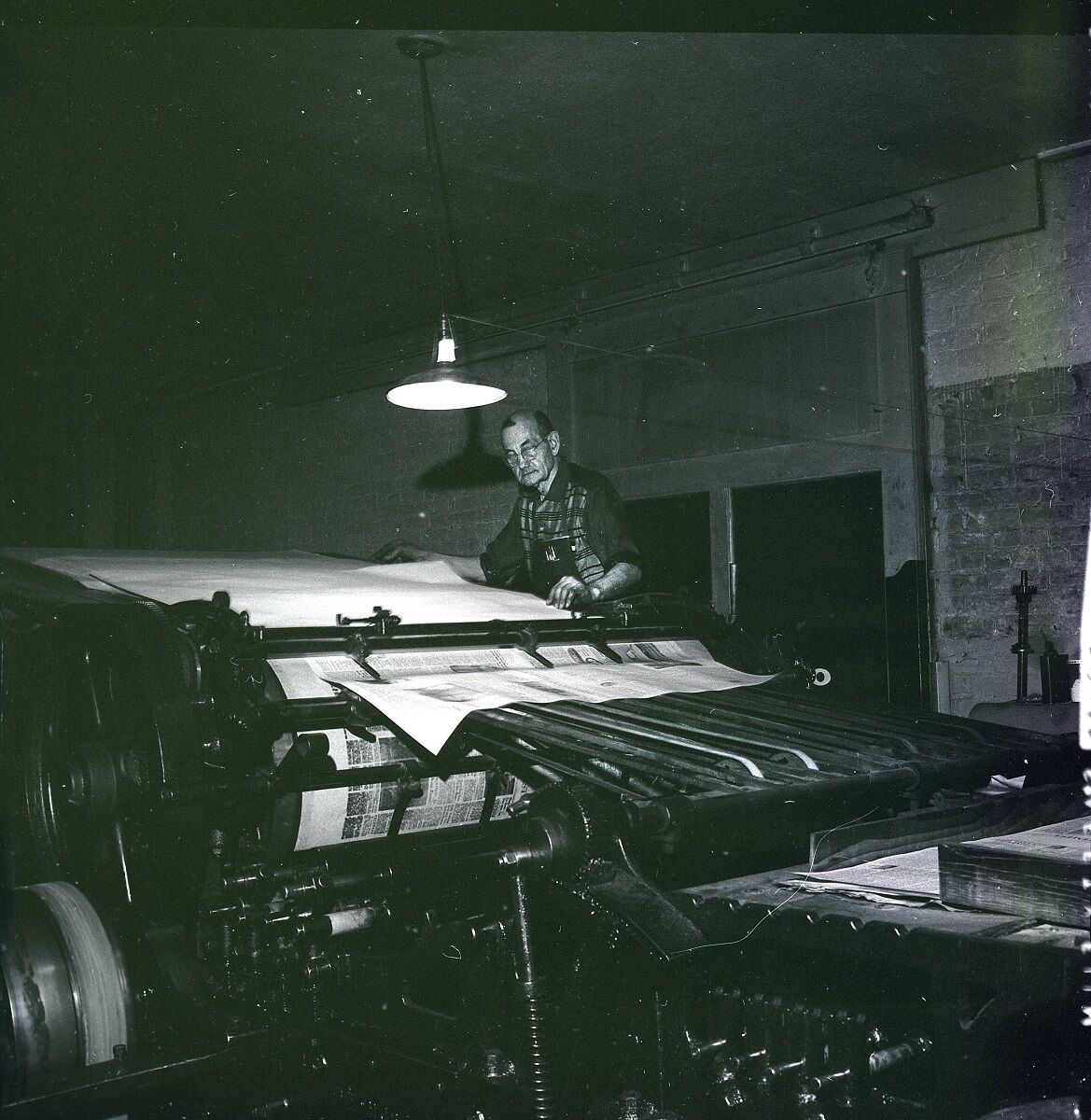 The printing press at work publishing The Optimist, a weekly newspaper in The Dalles, in March of 1961. The paper offered “All-Local News, Comment Pictures” at “Single Copy Price 10c.”  Scanned from a 2 1/4-inch by 2 1/4-inch black and white negative. 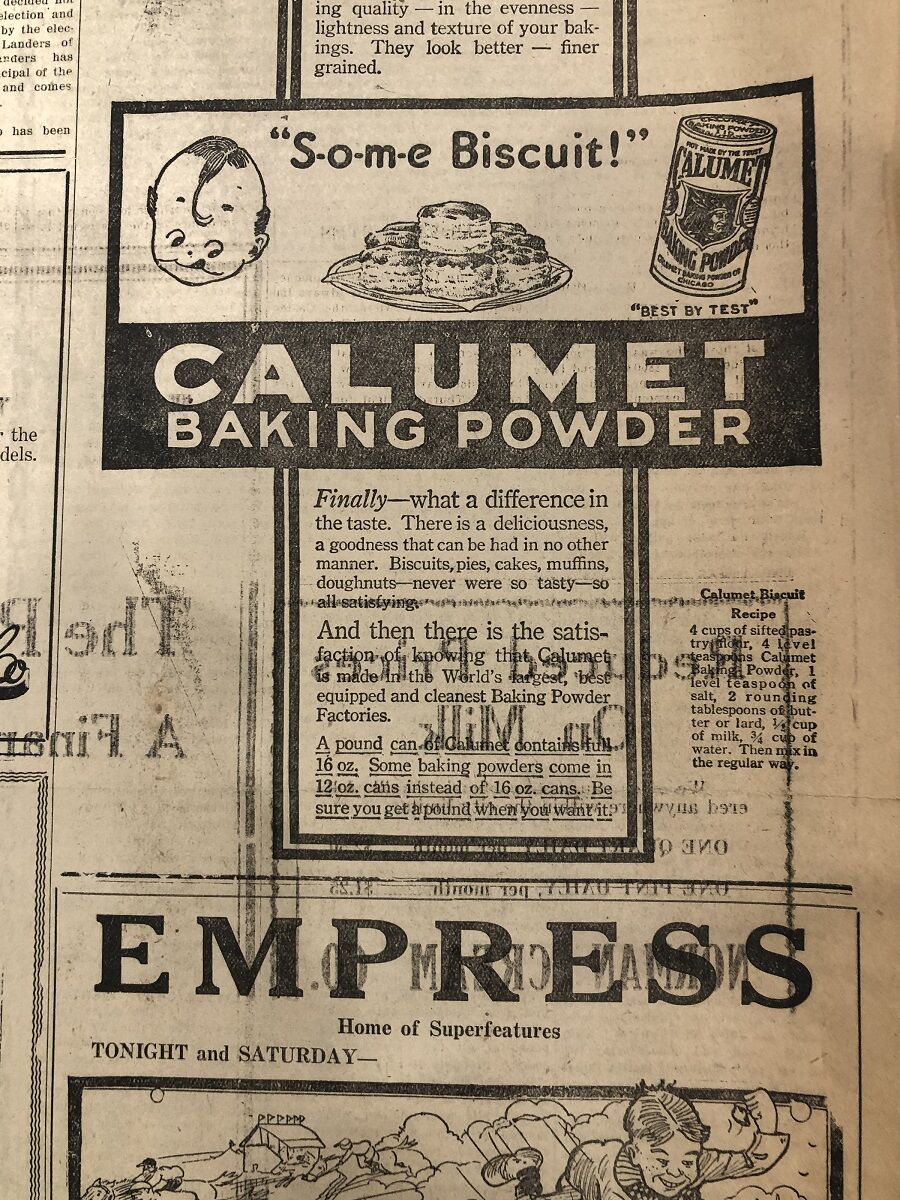 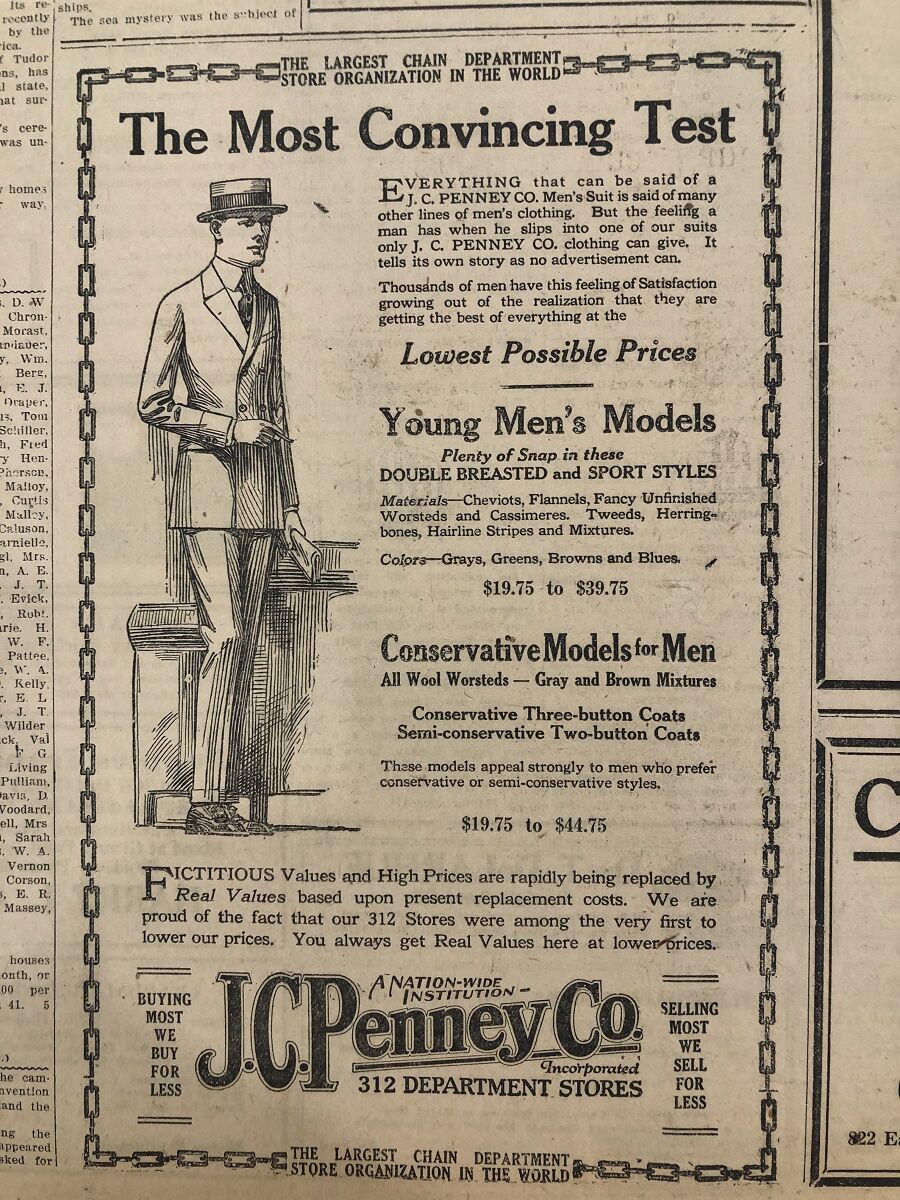 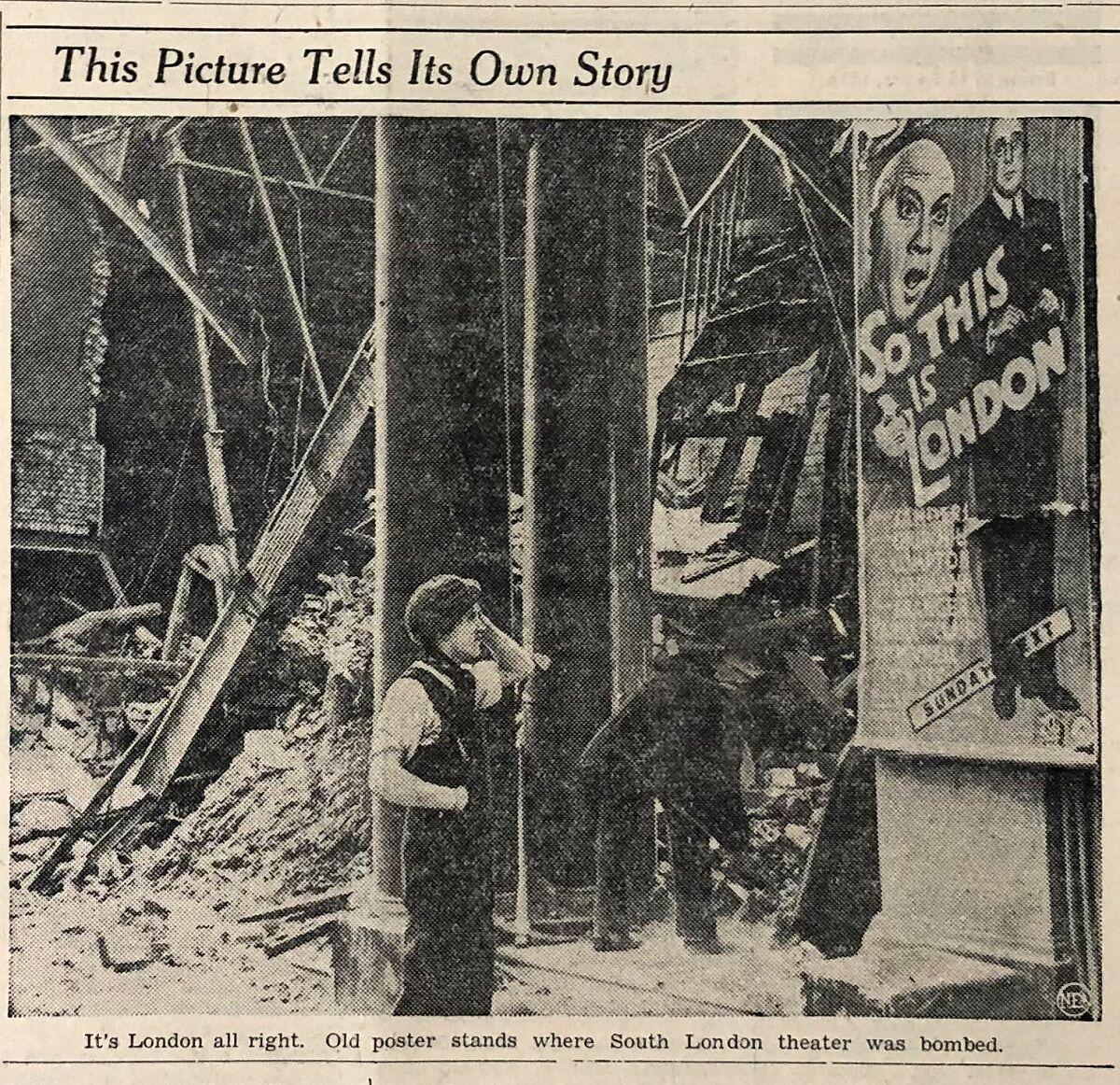 Since last Saturday, when the crest of floodwater in the Columbia was registered here, there has been a steady fall and indications that this fall will continue. There is still an enormous volume of water covering the lowlands here to a depth of many feet, but if the present drop continues, it will not be many days before the ferry road will be uncovered. During the past few days, some of the local boys have been deriving much sport by spearing the big carp which have come in from the river in large numbers. — Hood River News

Forty carloads of cherries will probably be shipped from The Dalles in the next three or four weeks, constituting the greatest movement of small fruits from this vicinity ever recorded here. Supplies usually consumed largely by the canneries will be shipped to eastern markets by local producers in the hope that larger prices will be realized than the 4 cents a pound offered by the canneries. — The Dalles Daily Chronicle

Flag Day will be fittingly observed tomorrow, Saturday evening at 8 p.m. at the Elks Temple, this city, when the public is invited to join in a program which has been arranged by Ercel L. King, district attorney. Walter R. Beatty will direct the K.P. Band, and Scouts will represent Troops 382 and 376. — Hood River News

Nine members of The Dalles high school Thespian troupe, together with their director, Albert Hingston, returned to this city at 3 a.m. yesterday after a “cross country” trip which carried them as far as Bloomington, Ind., and entailed a total distance of 5,500 miles. — The Dalles Daily Chronicle

One of the biggest single timber purchases in recent history of Hood River County was recorded last week by the Cascade Locks Lumber Company. The lumber company purchased 31.9 million board feet of timber from the Gifford Pinchot National Forest in Washington. The total contract actually calls for the Locks firm to take 72.6 million board feet, but the company will pay for the amount over 31.9 million feet when it is appraised again in 1964. To get to that timber, the company will build an estimated 18 miles of public roadway into the forest. — Hood River News

Newspaper operators, attending a convention in The Dalles, learned something about this area’s history, both man-made and natural, this morning in addition to the exchange of ideas about business and other affairs. Some 125 publishers and their wives registered. — The Dalles Daily Chronicle

GOLDENDALE — The world’s three largest windmills shuddered to a halt just 11 days after they were ceremoniously turned on when a mechanical malfunction damaged the generator on one of the 350-foot-tall machines, officials said. — The Dalles Daily Chronicle

Among teachers leaving this year at White Salmon Valley School District are four whose service in the district totals almost 100 years. Bill Sheckels, Whitson Elementary School principal, and Jerry Baker, White Salmon Middle School math and history teacher, have both been with the district since the 1950s. Fourth grade teacher Evelyn “Bunny” Morse has taught here since 1960 and Whitson custodian Wiley “Mutt” Herman came to the White Salmon district in 1961. The four were honored at an open reception Friday for students and their parents, former students, relatives and friends. — White Salmon Enterprise

School’s out for summer. Wednesday is the final day for classes for 2000-01 school year for Hood River County School District. Excited students will be walking and riding bicycles home around mid-day Wednesday throughout the county, and school buses make their final runs for the year. Monday and Tuesday saw students packing home artwork and writing assignments, and schools held outdoor “field days” to close out the year. — Hood River News

The Dalles City Park will be home to a rose garden and new children’s play equipment in honor of Tucker Lee Sherman. Shortly after 5-year-old Tucker died March 16, a number of people independently started working on ways to remember him. A plaque in the rose garden will honor Tucker. — The Dalles Chronicle

The skateboarding “half-pipe” constructed for this year’s Spring Festival may soon be getting a permanent spot of its own in Rheingarten Park in White Salmon. With support from organizers of the Spring fest and from White Salmon Mayor Roger Holen, a plan appears to be on the verge of execution. Spring Fest organizer Victor Werbin will present a proposal to White Salmon City Council next meeting. The concept calls for the half-pipe to be moved from where it currently rests in the tennis courts at the edge of the Whitson Elementary School playground to an unspecified location at White Salmon’s Rheingarten Park. “If the city is willing to back something for the park, that’s easier to do. There are not as many roadblocks as with the old tennis courts, which is on school property,” Werbin said. — White Salmon Enterprise

Bull Frog Industry Would Be Winner

E. F. Van Scholck, enterprising secretary of The Dalles-Wasco County Chamber of Commerce, has “doped” out a plan for the establishment of a new industry in this city. A small capital, a pair of rubber boots and a dip net are all that are required for someone to become wealthy, “Van” asserts.

The high water has filled dozens of low places in and around The Dalles with seepage water from the river. Nobody knows where the appeared from, but literally millions of husky young polliwogs are wigglin’ their way through the waters of these ponds, developing and preparing for their “great moment,” when they will emerge from the poliwogic state and become full fledge bull frogs. Van Schoick, who claims to have had considerable experience in the care and eating of frog’s legs, declares that these polliwogs will, given time, mature into big bull frogs of the edible variety — the kind served in the big restaurants under a six-syllable name at $3 a plate.

There is already a market for edible frogs in Portland and there will soon be a supply of them in The Dalles, thus making operative the law of supply and demand. What more could an enterprising business man, in search of place to invest his capital, want, Van Schoick demands. He is ready to go over the tadpole field with any and all persons interested, at any time, and explain the possibilities for establishing a new and profitable industry in this city. — The Dalles Daily Chronicle, June 16, 1921

The cherry harvest opened in the lower valley Tuesday of this week with picking of a quality of Black Republicans, which had already reached the brining stage, and it is expected that before the end of this week, early crops of Bings will be coming off the trees for the canneries and for fresh packing, although AGA packing plant will not be in operation until this coming week, when picking of Bings will be general in the lower valley.

At about the same time, Royal Anns will be in the process of harvesting and will keep many crews of pickers busy for several days.

Lamberts will closely follow the end of the Bing season, although at present they show practically no color.

In a number of orchards of the lower valley, Bings are running to especially good sizes, and the harvest will be about the same as a year ago.

Fortunately, in spite of many recent showers, practically no splitting of any consequence is reported, and growers have but one hope — that the fine, warm weather will continue, at least until the cherry crop of 1941 is off the trees in all sections of the valley. — Hood River News, June 13, 1941

8 More Men From Wasco County Get Call To Service

Off to the army went eight more Wasco County young men this morning as the 11th selective service call took effect in this area.

The quota of eight — five of which are volunteers — assembled at local draft board headquarters, 214 Washington St., at 9 a.m., after which they boarded a Union Pacific stage bound for Portland and an induction station of the United States army.

Immigration Tide on Wane as Result of New Restriction Act

“Defenders Of Democracy” Rolling Forth In Scores

Russia Reported Preparing For Any Emergency