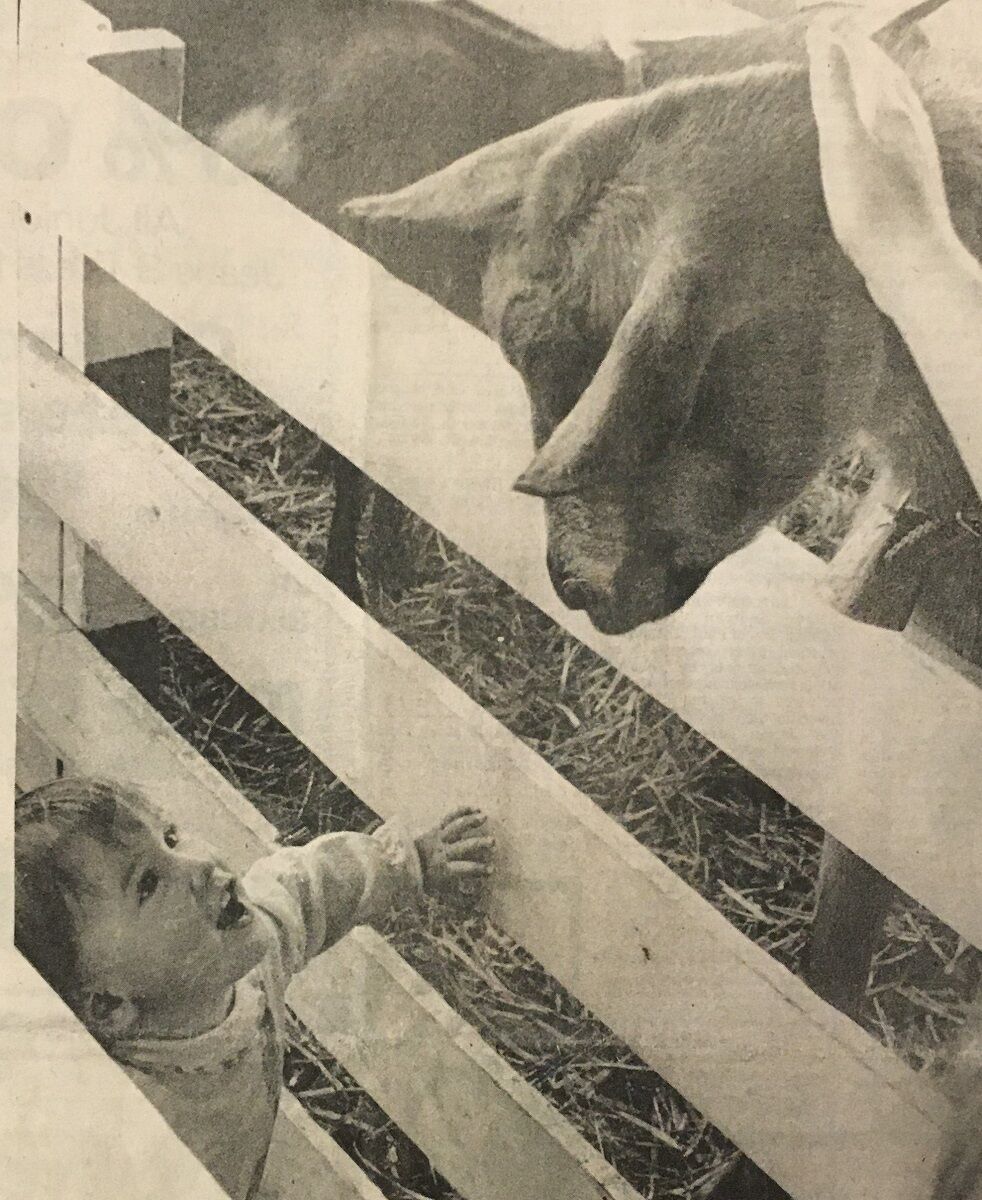 Talk to the animals — Everybody has a special favorite at the county fair, and Rebecca Moore leaves little doubt about what she likes best. Rebecca, 18 months, daughter of Mr. and Mrs. Wally Moore, showed none of the fear some young people hold for animals. Here she strikes up a conversation with a goat in the stock barn and the goat seems no less interested in Rebecca. The young fairgoer helped make up the record crowd that attended the 60th anniversary Hood River County Fair. — Hood River News, Aug. 1, 2001

After 20 years away from HRHS, 51 members of the class of 1941, biggest class ever graduated, had not too much trouble recognizing each other, after which they gathered for their group picture during the Saturday evening dinner-dance. — Hood River News, Aug. 10, 1961 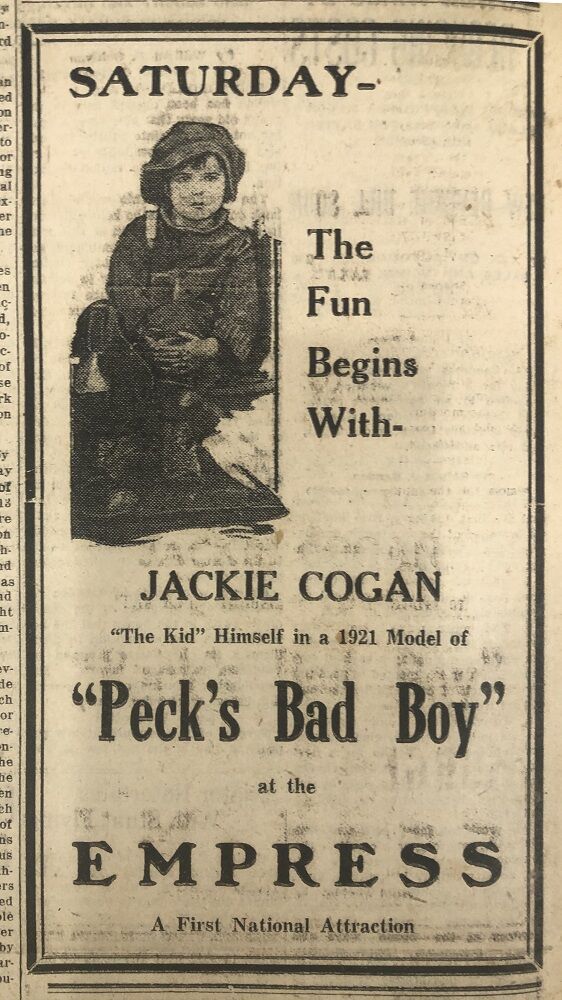 Advertisement for the Empress in The Dalles, August 1921. 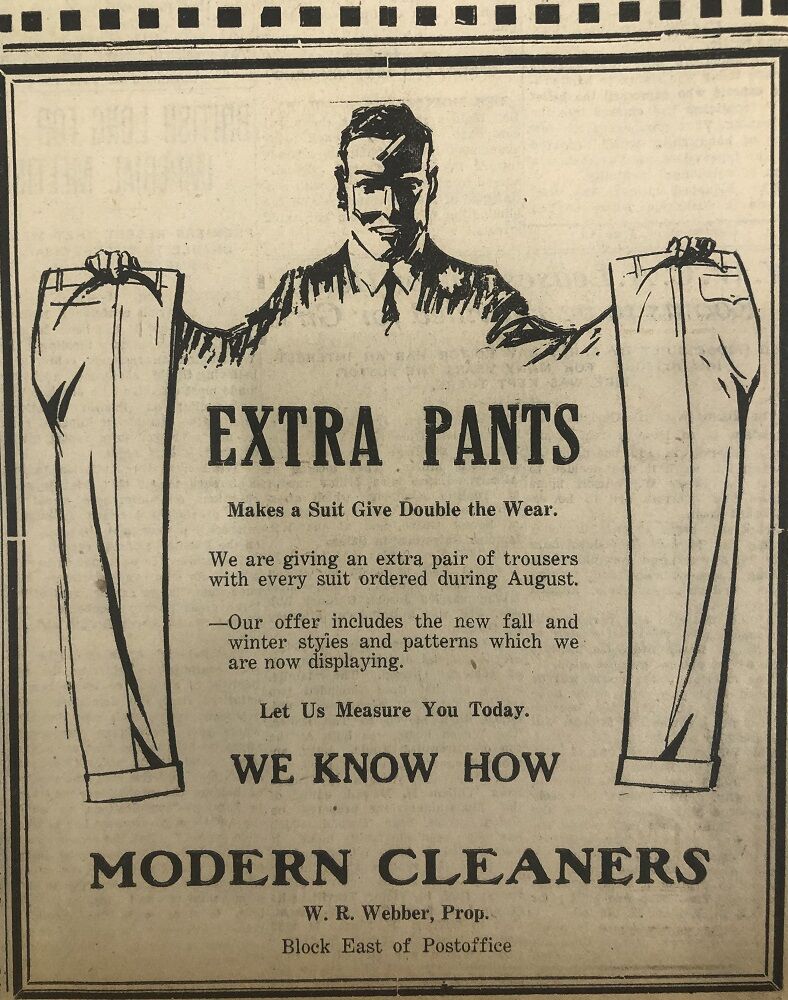 Shortly after noon on Monday, fire broke out in a warehouse behind the Snyder plumbing shop on Oak Street. An alarm was promptly turned in and the fire brigade was quickly on the job, with the result that the outbreak was confined to the building in which it originated. The Mt. Hood Motor Co.’s building, the livery barn Blowers building and the Snyder buildings were all slightly damaged. The loss, which is covered by insurance, is slight. It is believed that children playing with matches are responsible for the outbreak. — Hood River News

Wasco County prunes are going to be on the menus of effete British hotels and restaurants this fall. The local branch of the Oregon Growers’ Cooperative association has received an order for two cars of prunes from an English firm with headquarters in London, according to Manager J.H. Frazier. The prunes will be shipped under refrigeration from here to New York, where they will be placed on board ship on Aug. 30. — The Dalles Daily Chronicle

The Apple Growers Association packing school started yesterday at the Cascade House, downtown in this city, and Wally May reports there is need for a larger number of applications for the packing school course. Hence the time for registration has been extended until next week. The packing of Gravenstein apples began Wednesday of this week, and the entire tonnage of this variety to be handled by the AGA will be packed at the Cascade House. — Hood River News

Donald McDaniel, son of Mr. and Mrs. Wiley McDaniel of this city, evidently is having a hard time convincing Drake University, Des Moines, Iowa, that he is only 13 years of age and just entering high school, instead of having just been graduated. This morning you McDaniel received a letter ... offering him a scholarship to play with one of four university bands. — The Dalles Daily Chronicle

A parade of festooned bicycles, wagons, costumed youngsters and their pets will march through downtown Hood River Friday. The annual Pet Parade is open to all county youngsters. Parade route will be from the Heights down 12th and Ninth streets to Oak Street, then on to the Eagle’s parking lot at First and Oak. — Hood River News

SALEM — The legal maximum speed on most state highways will likely be 60 or 65 miles per hour in the near future, State Highway Engineer W.C. Williams revealed today. As of now, there is no designated speed on state routes and the basic rule applies. In effect, the basic rule lets a motorist drive at any speed as long as he retains control of his car. But some drivers think they have control at excessive speeds and traffic officials want this to stop. — The Dalles Daily Chronicle

“We just can’t get anymore fans. The supply has just vanished,” says an employee of a local hardware store. “Fans, fans. We got fans,” gloats the marquee in front of another. “We’ve probably sold 65 or 70 during the last few days, but we’ve got some left,” is the report from a third. “One person called from Portland to see if we had fans. He came out and bought four. That’s a long way to go for a fan.” In desperate times, desperate measures are called for, and six days of temperatures soaring from 99 degrees to 105 have taxed the ingenuity of those who want to beat the heat. — Hood River News

Before the harvest came, the long hours of plowing, planning and waiting. A draft horse team was turning the rich black earth of the threshing grounds at Dufur Saturday during the annual Threshing Bee. Parade Chairman Blodwin May reported 31 units, more than ever, joining the fun. General Chairman Bill Hulse was obviously delighted with the way things went. — The Dalles Daily Chronicle

Bingen is buying water from White Salmon again since the well at the city’s reservoir has been drying up. The well’s output has decreased in the past several weeks, Councilman Leland Huot told the Bingen City Council at its meeting July 21. The well is one of three that supply the city’s water. Until the well ran low the city hadn’t purchased any water from White Salmon after its newest well went on line in April, said Verna Yarnell, city clerk. The council discussed digging the well deeper, but a well driller determined that more water wasn’t available. The council also approved placing a meter at the well. — White Salmon Enterprise

Woodcutters have been banned from all logging activities in Hood River County forests because of extreme fire danger. “When the state says it’s dry enough for a level three fire alert, we try to protect county resources by stopping all harvest activities,” said Ken Galloway, county forester. He said the closure will be enacted until further notice. — Hood River News

At 3:20 p.m. the powerhouse at The Dalles Dam stopped generating electricity, trapping three people in an elevator and throwing the facility into darkness. “We lost power. We’re not sure why,” said Operations Manager Terry Armentrout. “We spent about an hour getting things back together.” He said all of the dam’s 26 generators shut down, including two station service generators that provide power for the dam’s use. Water flow through the turbines was stopped. “There was still water coming in from the John Day and nothing coming out of The Dalles,” Armentrout said. “We were getting to the point of exercising alternatives.” — The Dalles Daily Chronicle

Since 1973, the community of Glenwood has taken its water supply from a ground water spring. Now, that source, McCumber Springs, appears to be running at lower levels that anyone has seen since its creation as a community water source. As a result, Glenwood might have to contend with a limited supply of water. The Klickitat Public Utility District, which operates the water system in Glenwood, is keeping a close watch on the spring. “It’s holding its own,” said Lorraine Reynolds, water/wastewater manager for the PUD. “There is plenty of water coming down the pipeline still. People have been here a long long time, and have never seen the overflow that low. Normally it overflows over the diversion dam, but it’s about two-thirds less spillage that normal there.” Reynolds said that the situation is not yet dire. “It’s a heads-up type of thing. We want people to be aware.” — White Salmon Enterprise

ANTELOPE, Ore., Aug 10 — Knocked unconscious be lightning while driving his Ford car from Antelope to Shaniko Monday morning, Pete Olson, road supervisor of this district, narrowly escaped death when the machine caught fire. The car stopped in an unexplainable manner and two women tourists driving up behind it extinguished the flames.

Olson was driving across the Shaniko flats near the fill at the head of Pine Hollow when his machine was struck. The bolt hit the steel bow supporting the canvas top of the Ford, then traveled to other parts of the top over a wire used as a support. The women tourists had considerable difficulty in checking the blaze.

Olson was unconscious for several minutes after first aid was administered.

The machine suffered no damage other than the loss of the top.

Lightning struck several places in this vicinity Sunday and Monday. A tree was hit in the Fir Tree country and heavy black clouds and electric display indicated the rain fell in the Blue mountains south of here. Sunday was the warmest day recorded this year in Antelope, the mercury climbing to 96 degrees in the afternoon. Only a trace of rain fell in the vicinity of Antelope. — The Dalles Daily Chronicle, Aug. 10, 1921

Shippers of fruit in the West must remove the poisonous spray residue before making shipment, department of agriculture held on Tuesday in a ruling given to Sen. McNary of Oregon. Oregon growers complained that a federal inspector from Seattle was working a great hardship on the fruit districts by requiring them to remove their spray residue, which contains arsenic, from their apples and pears.

The complaint was presented to the department of agriculture, which upheld the inspector, and said that there were the best reasons why this spray residue should be removed. In some instances, it was pointed out by the department, persons have been made ill by eating raw apples containing an excess of this chemical, while in some of the eastern cities, food inspectors have condemned large consignments of the fruit. — Hood River News, Aug. 12, 1921

Steamer Teal Is To Be Placed On River Next Week

Nixon May Tell Plans Next Month