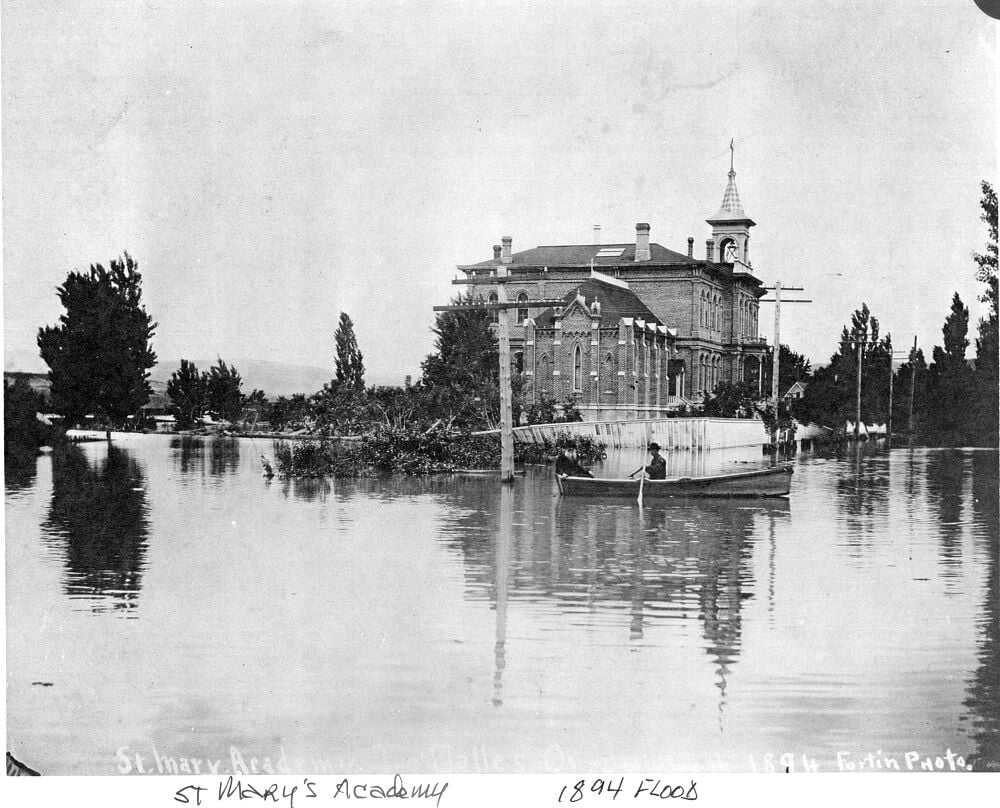 The former St. Mary’s Academy is pictured in the flood of 1894. 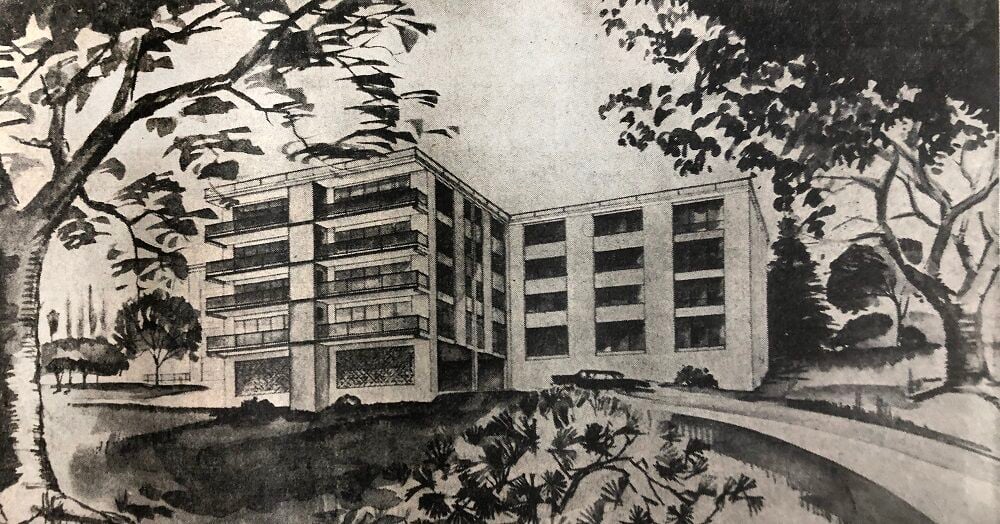 This is an architect’s drawing of proposed new building at Mid-Columbia Home, The Dalles, to house 255 additional geriatrics patients, bringing the total population of Home to 500. Building would be stage 1 of six-year expansion program. — Feb. 24, 1961, The Dalles Daily Chronicle

Easily the heaviest snowstorm of the winter put the county under a deep mantle of snow last weekend and in some parts of the valley, the covering was well over 15 inches. From shortly after midnight on Saturday through 9 p.m. on Sunday, snow fell without cessation and downtown, the depth was about 10 inches. On Monday, a sharp thaw set in and got in its work but on Monday evening, a sharp frost put a hard coating on the snow. — Hood River News

Died: The Dalles chamber of commerce; 9:20 o’clock last night, at Hotel Dalles. The deceased is survived by a husky young infant named “The Dalles-Wasco County Chamber of Commerce.” He gives rich promise of carrying on the work of his parent along broad lines. — The Dalles Daily Chronicle

Completing 22 years of the show business in Hood River this week, A.S. Kolstad, who has disposed of his interests in the two Hood River theaters, is retiring to his Cascadian ranch, where he will concentrate on poultry production and other ranch activities. Several years ago, Kolstad decided, after a term as mayor of Hood River, that he had a definite yen for the country life and he acquired the former A.L. Anderson home and acreage as a prelude to the development of a special breed of fryer chickens for an exclusive market. — Hood River News

Free transportation from home to polling place will be provided any person on Wednesday, Feb. 26, when the airport and industrial bond issues will be put up to a vote of the people, Herbert A. Vind, chairman of the coordinating committee of the Chamber of Commerce, announced today. — The Dalles Daily Chronicle

Cold Storage Closes Early — Duckwall Bros. announced today that closure of the firm’s Odell cold storage for the present season marks one of the earliest closing dates for that operation in several seasons. “We expect to have all our remaining fruit shipped from our downtown plant sometime in March,” says Dick Duckwall, firm manager. “We are now completely sold on Anjous and the only remaining fruit we have in storage unsold is a limited quantity of Red Delicious Extra Fancy grade sizes 138 and larger.” — Hood River News

The Wasco County Grand Jury yesterday submitted recommendations at both the Wasco County and The Dalles City jails. Improved cell lighting was a grand jury recommendation shared by both jails. The grand jury report noted that lighting in the cells was inadequate for reading. An improved book and magazine library was recommended at the county jail, and either a good washing or new paint job was suggested for the city jail walls. — The Dalles Daily Chronicle

1981: Construction will start in June on a $320,000 campground at the Wyeth interchange east of Cascade Locks, district ranger Gene Zimmerman of the U.S. Forest Service said this week.

Construction will start in June on a $320,000 campground at the Wyeth interchange east of Cascade Locks, district ranger Gene Zimmerman of the U.S. Forest Service said this week. Zimmerman said the federally funded campground will have facilities for 14-17 single family parking areas and four group camping areas. Included in the development will be a rest room building, a pressurized water system with standpipes throughout the campsite, fire pits and a trail head. “We went through a long period waiting for the county to give us approval to buy a plot of land adjacent to the 15 acres the Forest Service now owns and had planned to build for some time,” Zimmerman said. — Hood River News

Federal funding of the Columbia Gorge Commissions of Oregon and Washington will end this year, the commission members were told Monday. Jeffrey Breckel, director of commissions, told members they would have to have the states (pay) for more than $160,000 on the current two-year budget. — The Dalles Chronicle

There was no reason to think there was any negligence in this case, said Bingen Police Chief Bill Wang, referring to an accident Jan. 25 involving one of his department’s officers. Wang said he reviewed the accident report submitted bu the sheriff’s deputy responding to the accident involving Rich Cortese. Cortese was responding to another accident on State Route 141 at about 12:20 a.m. when he apparently lost control of his patrol car on the Underwood Cutoff. “The roads were very wet and it’s very easy to lose control,” said Wang. In an instance where there had been negligence, Wang said, a citation would have been given or another action would have been taken. Cortese suffered cuts to the knees, arms, and face and has since returned to duty following the accident. — White Salmon Enterprise

Last week, Hood River was placed on notice by the Confederated Tribes of Warm Springs that a gambling casino is coming to town. Since the timeline for construction of that facility is not yet known, local officials have chosen to take a “wait and see” stance. They believe that there may be very little they can do to stop those plans since the casino will be built on tribal trust land east of the city. The 40-acre parcel has “sovereign nation” status and is exempt by federal law from land use restrictions. — Hood River News

Like rolling thunder, the beat of the “taiko,” or Japanese drums, flows through your body. And with each drum beat, the vibrations washed over students at Colonel Wright Elementary School as they clapped along to the music during a PTA-sponsored performance Tuesday. — The Dalles Chronicle

Columbia High School senior Kenny Bucher became the first wrestler in the three-year history of the CHS program to earn a state medal. Bucher, in his second year of wrestling, placed eighth at the state 2A Mat Classic XIII, held Friday and Saturday in the Tacoma Dome. Columbia’s happy-go-lucky heavyweight lost the match for seventh place —his fifth overall in the tournament — to senior Allen Root of Sultan, on an 8-2 decision. “It’s an honor to be the first to place at state for our school,” said Bucher. “I just wish I had another year. That’d be nice.” — White Salmon Enterprise

UN Patrol on Way Toward Luluabourg

Several residents of the west side are expressing hope that they will, at an early date, have an opportunity to meet the person or persons who make a practice of stealing one or other of the Sunday papers from roadside boxes and thus force subscribers to go without part of their Sunday entertainment or drive to town to purchase another copy.

One resident states that about every other Sunday, when he goes out to Tucker Road to pick up his Sunday paper, he finds the box empty and a check reveals that the paper was placed into the box earlier in the morning. He states that he does not wish to be on hand at 2 a.m. when the paper is delivered at the box to insure being able to read his paper later on, but he says that if the thief forces him to take such action, he will take his shotgun along and thereby secure a clue as to who the thief is. — Feb. 28, 1941, Hood River News

World war veterans to the number of 154 registered here Saturday for general service in specialized lines in the even of national emergency, it was announced today by Barney M. Martin, commander of The Dalles American Legion post, which conducted the local registration.

A surprising number of men capable of handling important assignments in work in which they are trained but not now employed as revealed by the registrations, it was stated. Diesel engineers, ambulance driers, interpretors, map makers, tractor operators, machinists, electricians, telegraphers and many other qualified experts were listed whose present employment varies from common laborer to traveling salesman.

Registration committee members typed questionnaires from 9 a.m. to 10 p.m. Saturday, completing the papers which will be sent in to American Legion state and national headquarters for the compilation of veteran man-power records.

A number of World war veterans who were unable to be in the city Saturday were registered today with Legionnaires George Scherrer and Eugene Elton at the county courthouse.

Passage of a health ordinance, a dance hall ordinance, and the invocation of the state prohibition law as a city ordinance, are recommended to Mayor P.J. Stadelman and the council by W.D. Morris, special investigator, who has been working in The Dalles secretly for almost three weeks.

Morris was sent to The Dalles by Chief of Police Jenkins of the Portland police department at the request of Mayor Stadelman. He has spent the time since then in quiet investigation of every phase of activity requiring police regulation.

Morris, who left The Dalles this afternoon for Portland, paid particular attention to the public dances and to the pool halls. His presence here was unknown to more than three people until the arrests were made at a local garage last Sunday afternoon, when Mayor Stadelman asked Morris to assist the police in working up the evidence.

In his concluding letter to today, Morris took occasion to compliment the managers of the public dances.

“I have attended dances in most of the large cities of the northwest and I find the cleanest of dances in you city,” the letter said. “There were a few who tried vicious dancing but in these cases the offenders were spoken to, and it is evident the managers are trying to conform to the rules.”

In his investigation, Morris said police officers should not loiter around pool halls and hotels except on calls or in the course of their duties. Public dances should be licensed under a permit system, he declared, and the police should watch these dances. Hotels and rooming houses should also be licensed ... — Feb. 24, 1921, The Dalles Daily Chronicle