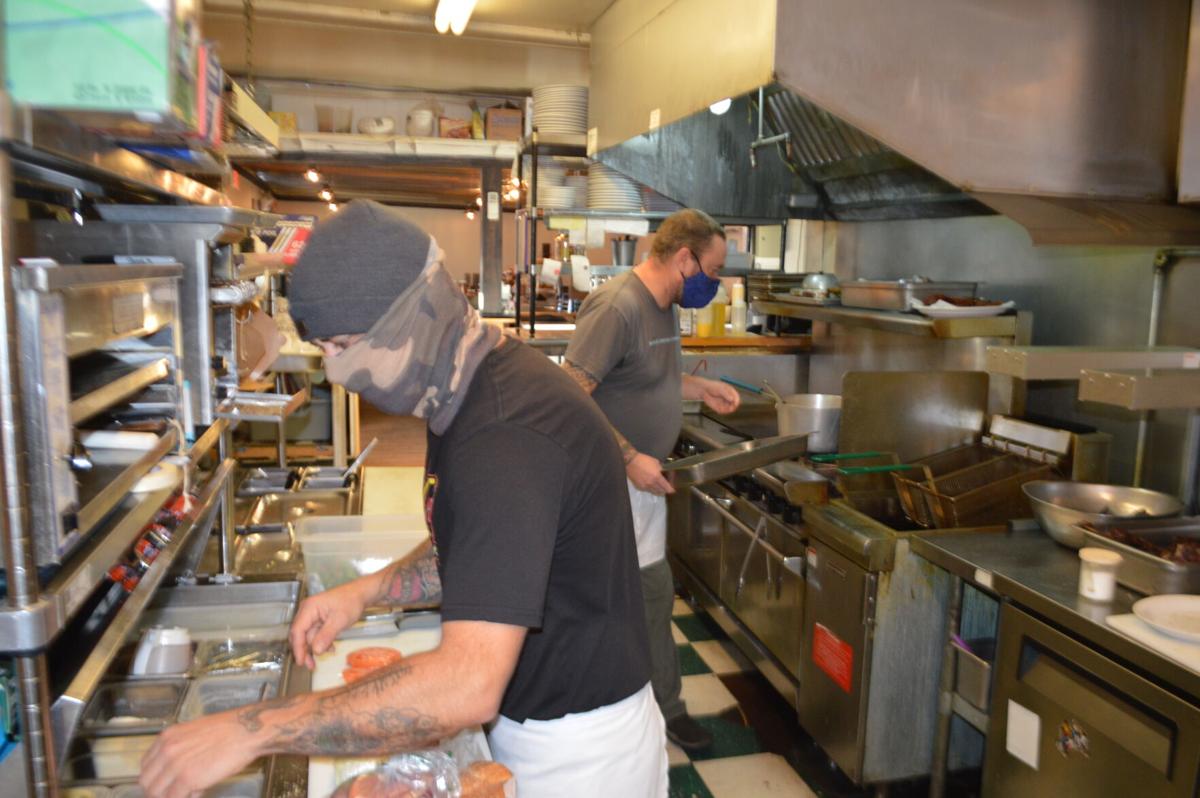 Jason Swindle, left, and owner Justin White prepare lunches at Apple Valley Barbecue in Parkdale, where local support of the restaurant has been the key to getting through the pandemic. 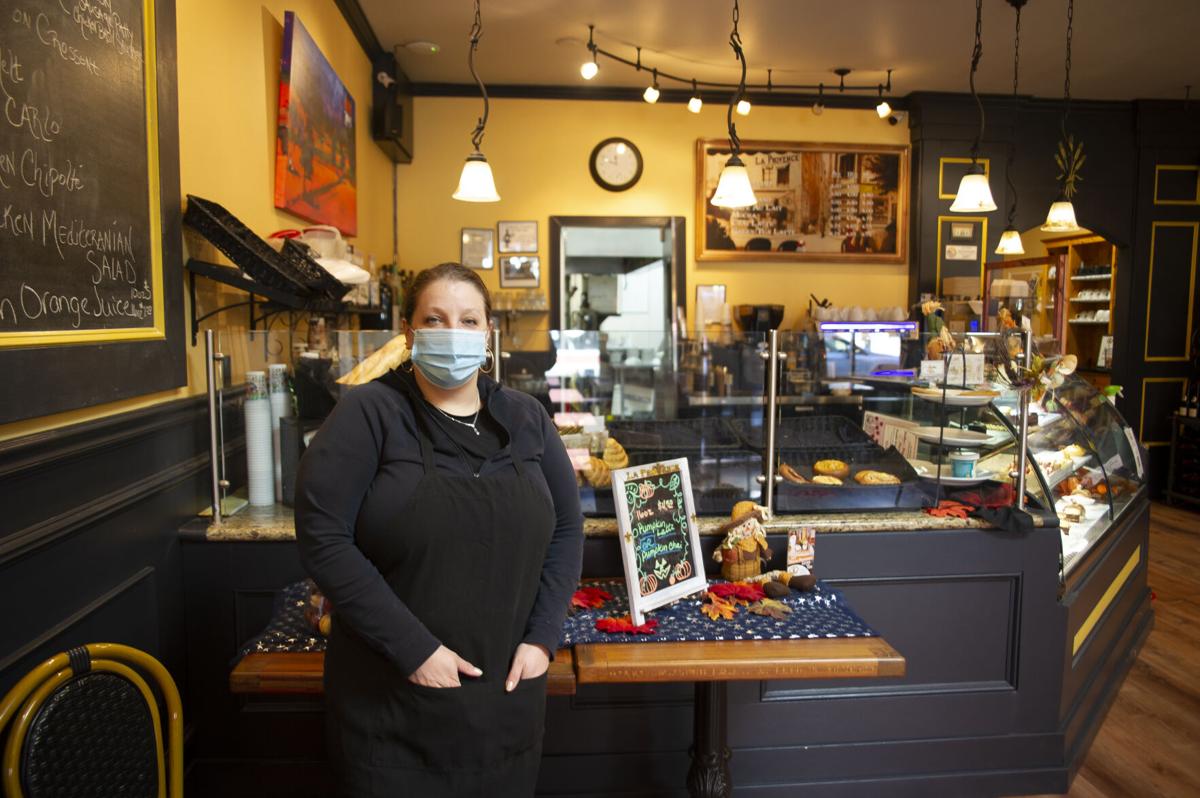 Tara Woolsey stands in the dining room at Petite Provence restaurant and bakery downtown The Dalles, where they are open for take-out only. She said the “two-week freeze” has been slower then the shutdown in spring, but she hopes to add outdoor dining under post-freeze guidelines. 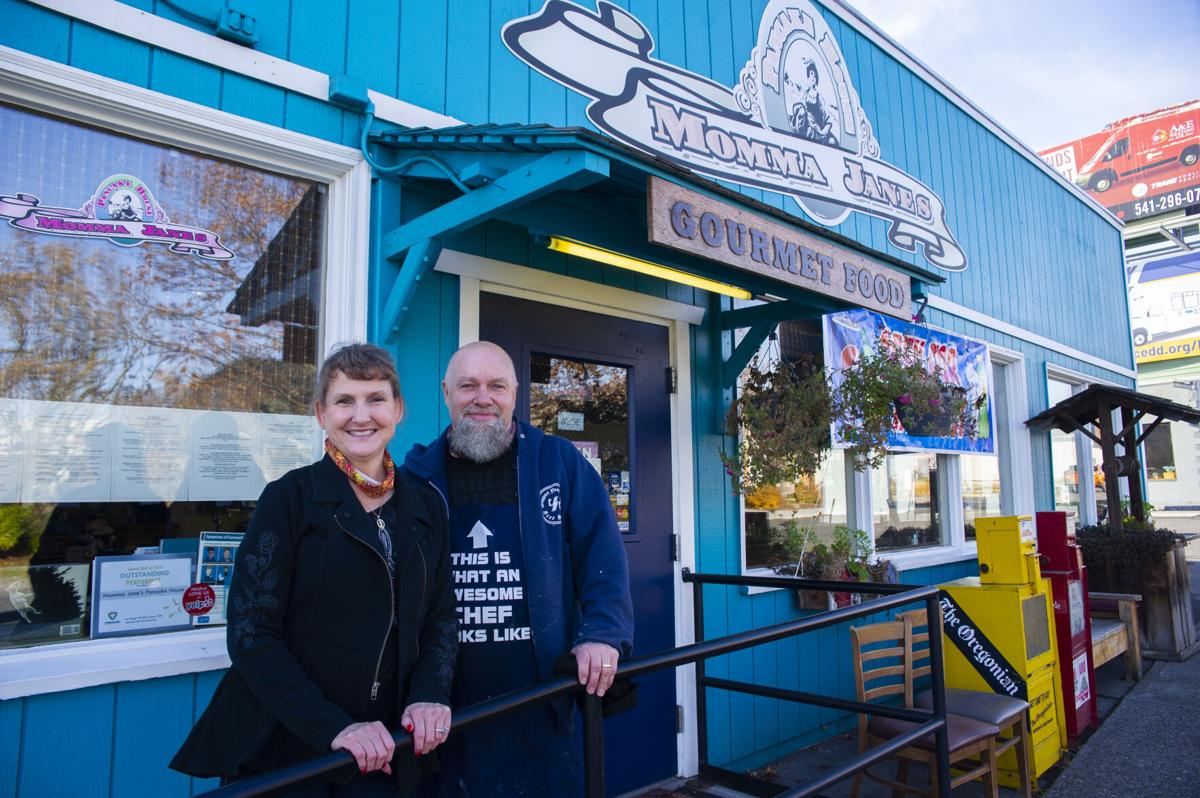 Co-owners Kay Smith and Barry Springer stand outside Mama Janes Pancake House in The Dalles. They are offering takeout, delivering orders to customers as they wait in the warmth of their vehicles. 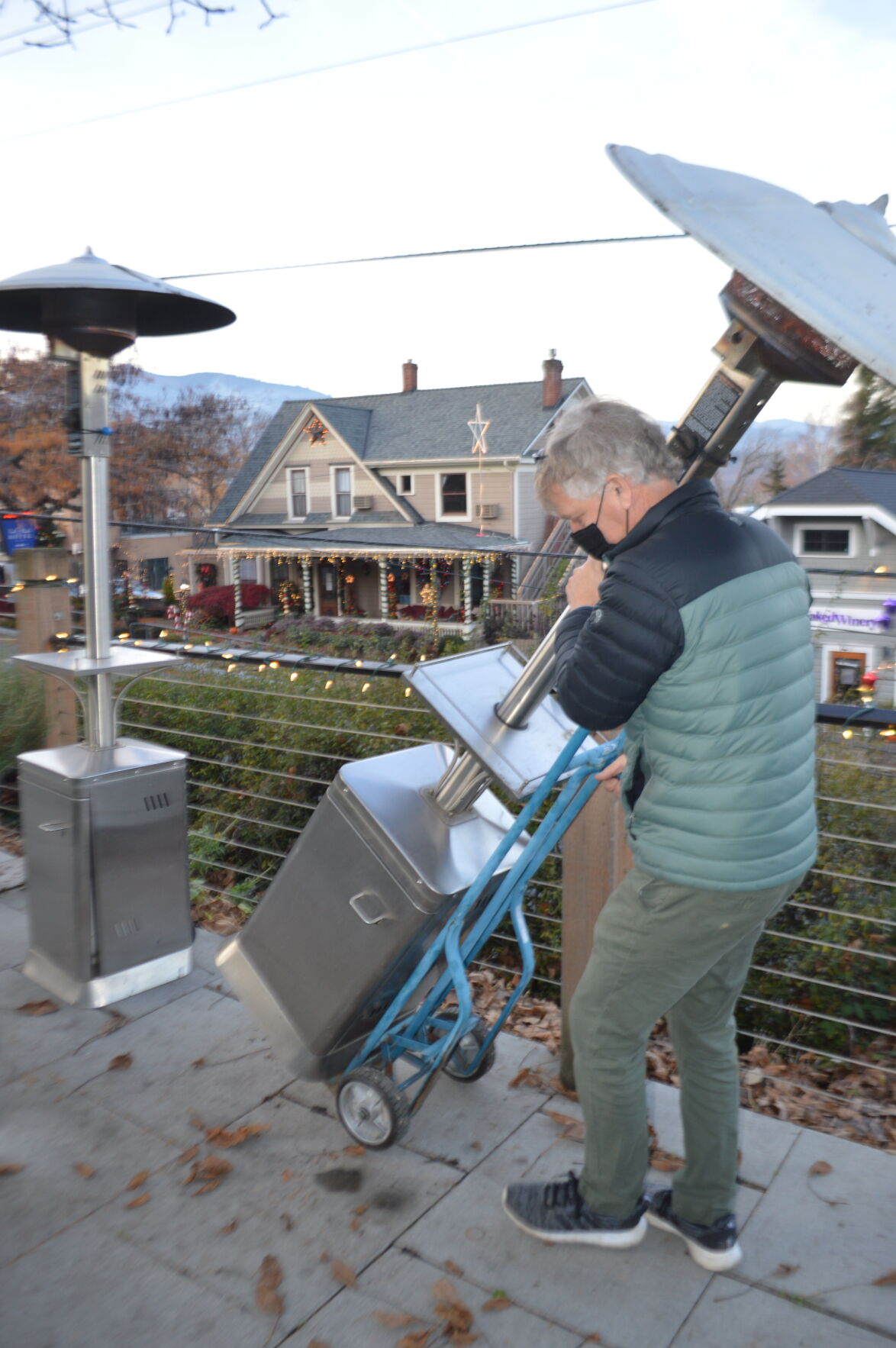 3 Rivers Grill owner Jimmie Dey moves patio heaters as he begins putting things away for a closure he expects to last one or two months.

Jason Swindle, left, and owner Justin White prepare lunches at Apple Valley Barbecue in Parkdale, where local support of the restaurant has been the key to getting through the pandemic.

Tara Woolsey stands in the dining room at Petite Provence restaurant and bakery downtown The Dalles, where they are open for take-out only. She said the “two-week freeze” has been slower then the shutdown in spring, but she hopes to add outdoor dining under post-freeze guidelines.

Co-owners Kay Smith and Barry Springer stand outside Mama Janes Pancake House in The Dalles. They are offering takeout, delivering orders to customers as they wait in the warmth of their vehicles.

3 Rivers Grill owner Jimmie Dey moves patio heaters as he begins putting things away for a closure he expects to last one or two months.

“To-go” is the classic phrase customers often add by force of habit in these pandemic days of ordering a meal, beer or coffee.

Yet to-go  might the only game in town  and filling even those orders means that establishments in the Gorge are finding themselves somewhere on the struggle spectrum.

Fearing the worst and hoping for the best is the simplest say to sum up the thoughts of restaurant owners who have already experienced shut-downs and slowdowns, and are looking ahead to winter months they already know to be slow — pandemic or no pandemic.

With reduced-capacity requirements the rule, not all establishments can provide indoor seating and are seeking other options.

“This time around, it’s a little bit slower,” said Kaye Smith of Mama Janes Pancake House in The Dalles.

Columbia Gorge News asked local restaurant owners about the realities of the two-week “freeze” on indoor dining, along with other restrictions ordered last month by Gov. Kate Brown, and to look ahead to what the coming months will be like.

“It’s most likely going to be a long winter,” said Justin White, owner of Apple Valley BBQ in Parkdale.

“Things aren’t going to better anytime soon but the locals are really supportive up here and we have a pretty steady local clientele,” White said.

Oregon’s freeze is scheduled to end Dec. 2 — watch columbiagorgenews.com for updates on the situation statewide and in the Gorge.

In Washington state, the governor’s “freeze” lasts another two weeks at least; Columbia Gorge News will look at how Klickitat County establishments are faring in the Dec. 9 edition.

In both states, businesses are adapting to difficult, if not prohibitive circumstances for running an eating or drinking establishment.

“A lot of businesses are hanging on by a shoestring,” Hood River Mayor Kate McBride said last week as city council discussed ways to craft temporary official measures to assist restaurants. Throughout the Gorge, tents and temporary arrangements on private property are becoming the norm as more and more businesses try to find ways to bring in customers in the face of indoor dining restrictions or prohibitions.

In Hood River, city council agreed last week to fast-track a temporary-use permit program for businesses needing to make use of private property for space to provide take-out and social distancing.

3 Rivers Grill in Hood River has rolled up its tent, and outdoor heaters, and has closed until at least January.

“We stayed open for takeout. We were losing so much money but just in case we were allowed to open this week,” said owner Jimmy Dey. “But now it’s just looking like with 29 (COVID-19) cases or some ridiculous number, that will bump us up to the two-week average. It’s just looking like its going to be a rough couple of months.”

At Mama Janes Pancake House, 900 W. Sixth St., The Dalles, Kaye Smith, co-owner with her husband Barry Springer, is taking phone orders in the empty dining room. During the “freeze,” she has many customers placing orders by phone or in person then waiting outside or in their vehicles.

“I call them when their order is ready,” Smith explained.

She said the shutdown has been hard. “This time around, it’s a little bit slower. It’s colder, for one thing.”

As the “freeze” ends and outdoor dining becomes a possibility, Smith and Springer are debating the feasibility of setting up a tent and propane heaters outside the restaurant. It’s risky, she said, because it would be expensive and the restrictions could end at any time. She is hoping indoor dining can open again soon.

“December is a good month for restaurants. We missed Thanksgiving, and we would usually be packed right now,” Smith said.

But she is looking for positive ways to move forward. “I try to take something, and make it better. There is no point being negative about it, there is nothing you can do to change it.”

Dey decided to close, with an eye to the pandemic data to come.

“With the governor’s new orders and COVID cases in the last two weeks, it looks like going to be put into the Red Zone and if we don’t next week, we will two weeks from now once the Thanksgiving numbers come in,” Dey said. “It seems safer for us to just close and stop losing money every day and open again after the curve. I’m thinking it may be January, if we’re lucky. Valentine’s Day, maybe?”

With new guidelines allowing outdoor-only dining options in counties classified as “extreme risk,” manager Tara Woolsey of Petite Provence said she planned to inquire with the city this week about the possibility of having a “parklet” in the parking strip to expand outdoor dining options. The restaurant is located downtown at 408 E. Second St. “We are on the list for one,” she said, noting that the limited sidewalk seating they currently have is too small to allow socially-distanced dining. “I’m hoping we can open the indoor dining area again soon,” she said.

The bakery and restaurant has been offering takeout over reduced hours, 8 a.m. to 3 p.m., during the two-week “freeze” and the restaurant and bakery is “doing okay,” Woolsey said.

“This go around has hurt a little more than the last one,” Woolsey said. “Winter is a little slow for us anyway. There are days we wonder why we opened. But we have a really great community, who really want to support local restaurants.”

“Winter is always tough,” said White of Apple Valley, who also opens Apple Valley Store near Hood River, which remains open but no customers allowed indoors. He said the days of grazing the numerous fruit spreads inside the store are gone, though guests can still ask to be served a disposable plate with four samples.

The Parkdale restaurant has been to-go only since April.

“We’ve been lucky enough to have catering in the winter, with parties of up to 600 at the end of December and that made the winter a little shorter, but now we know it’s not going to happen and on top of that, knowing its going to a tough winter, it’s scary.

“It’s going to be tough. But we’re preparing for it,” White said. “There seems to be solid core local crowd that is dependable and, knowing that, we can survive. But we would not be able to do that without local support.”

Dey of 3 Rivers said opening and reopening restaurant is complicated and expensive — as much as $6,000 each time.

“It justs cost so much for the opening and closing procedures. It’s difficult. The main thing is that all our merchandise is perishable. You’re losing all your stock,” he said.

Dey is optimistic for the long-run.

“I think it will be fine. I think by next spring when it warms up again I think we will have vaccine available, probably, and the weather will start getting better, days get longer and people start coming out again,” Dey said.

White said that Apple Valley served Thanksgiving dinner for the first time, and almost 150 ham or turkey-and-trimmings dinners went out the door. He said he expects business to pick up by the time the restaurant marks its 10th anniversary in April.

White announced he is expanding his operations, with the purchase of the Blue Canoe Cafe building, a block east of Apple Valley. The purchase from John and Christina McGhee takes effect Jan. 1 and White will open a breakfast cafe and ice cream store in the double-entrance building (which is also designed for drive-through), with opening as early as February.

Mark Gibson contributed to this report