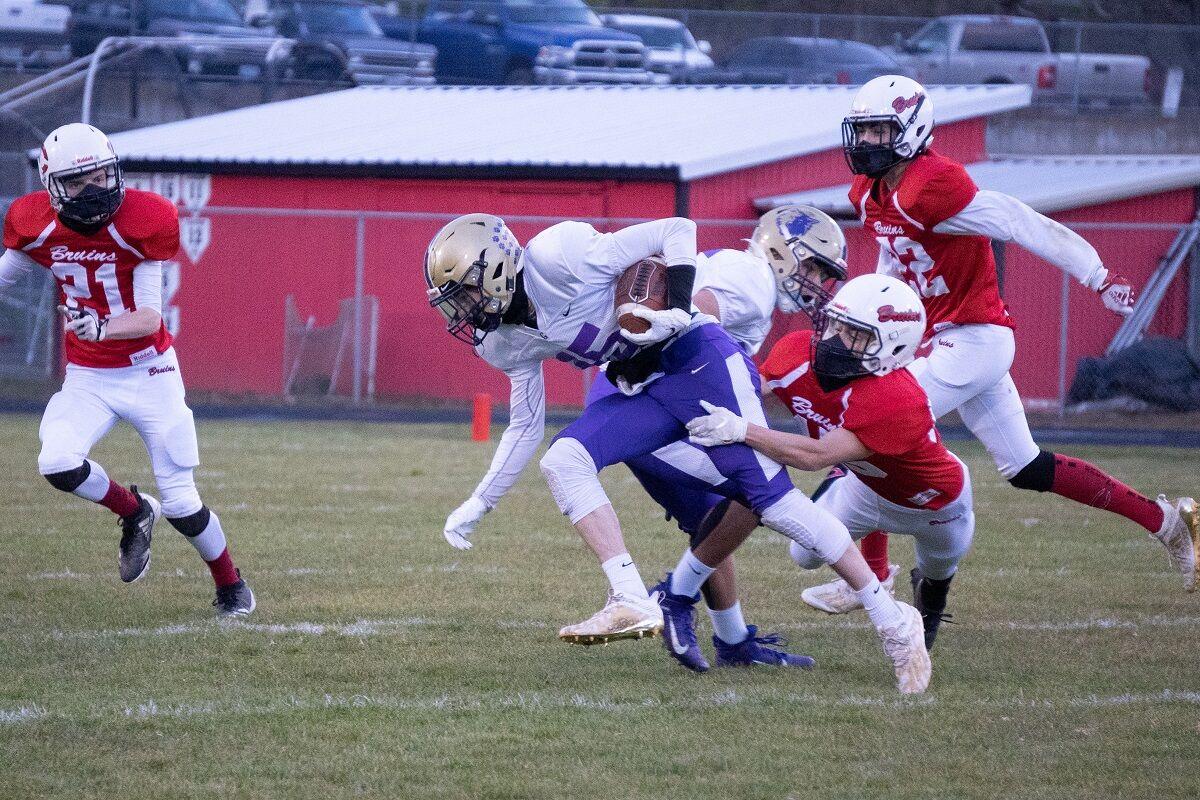 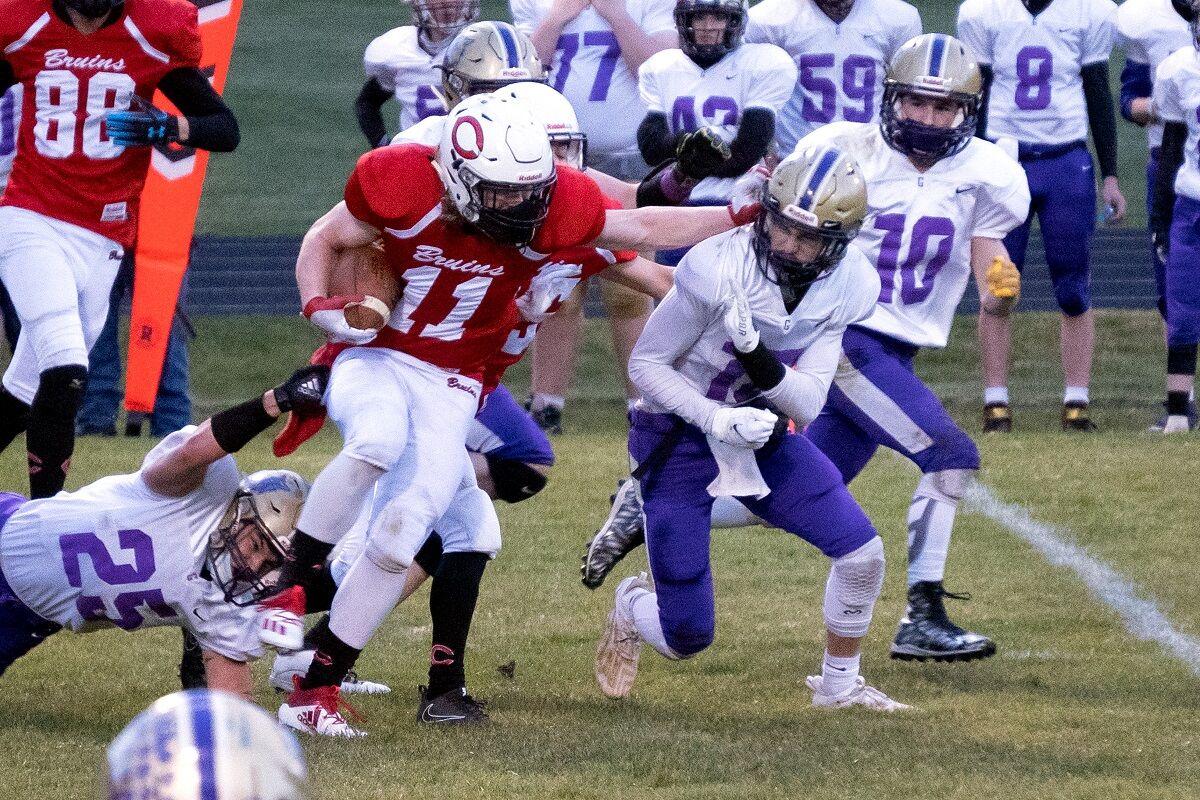 Senior running back Austin Charters fends off defenders on his way to the end zone. 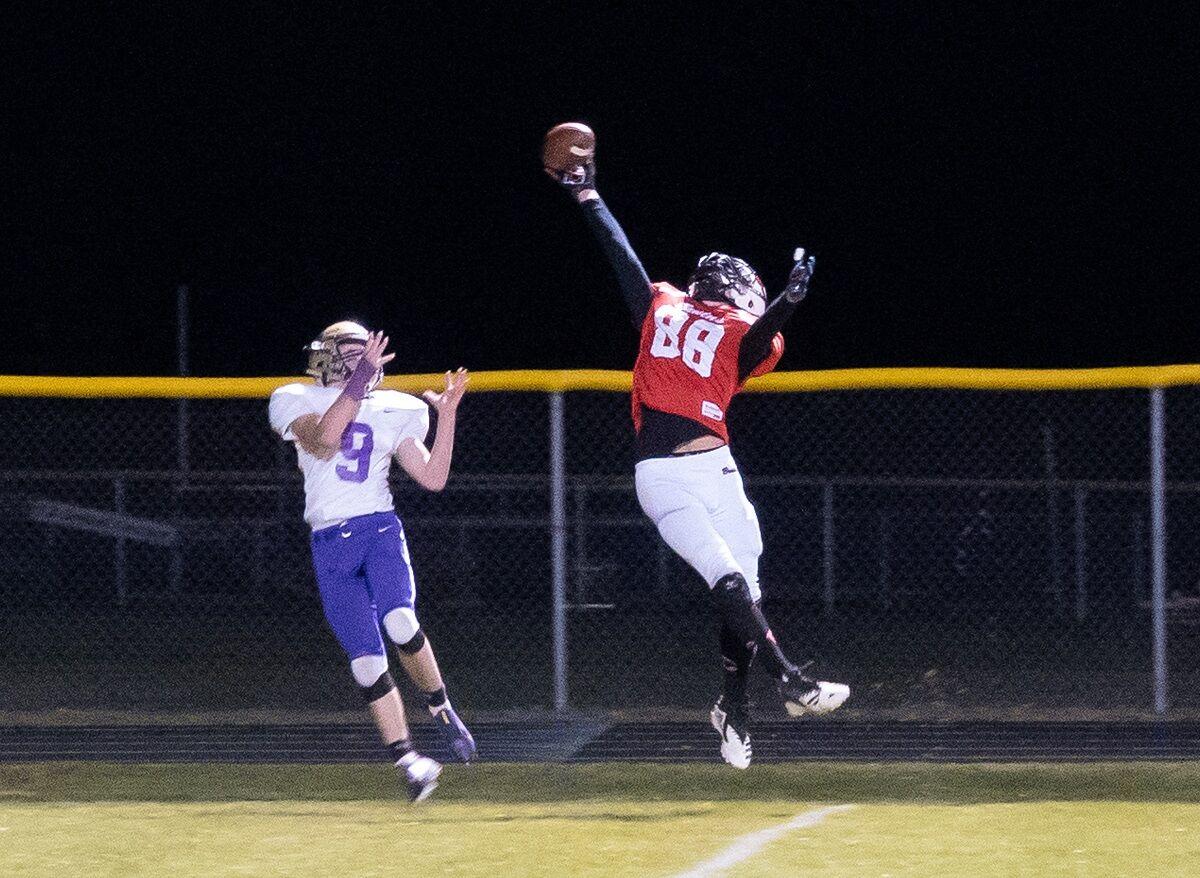 Junior defensive back Chase Colloton breaks up a Goldendale pass towards the end of the second quarter. 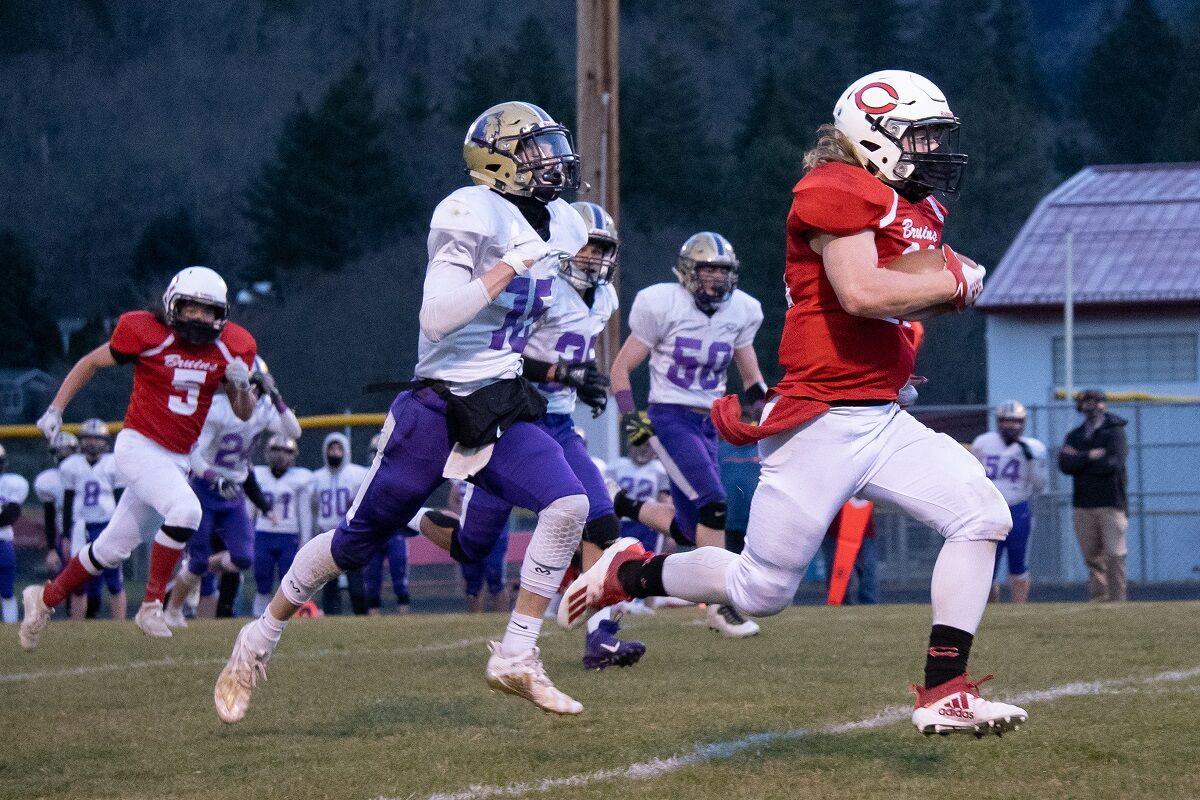 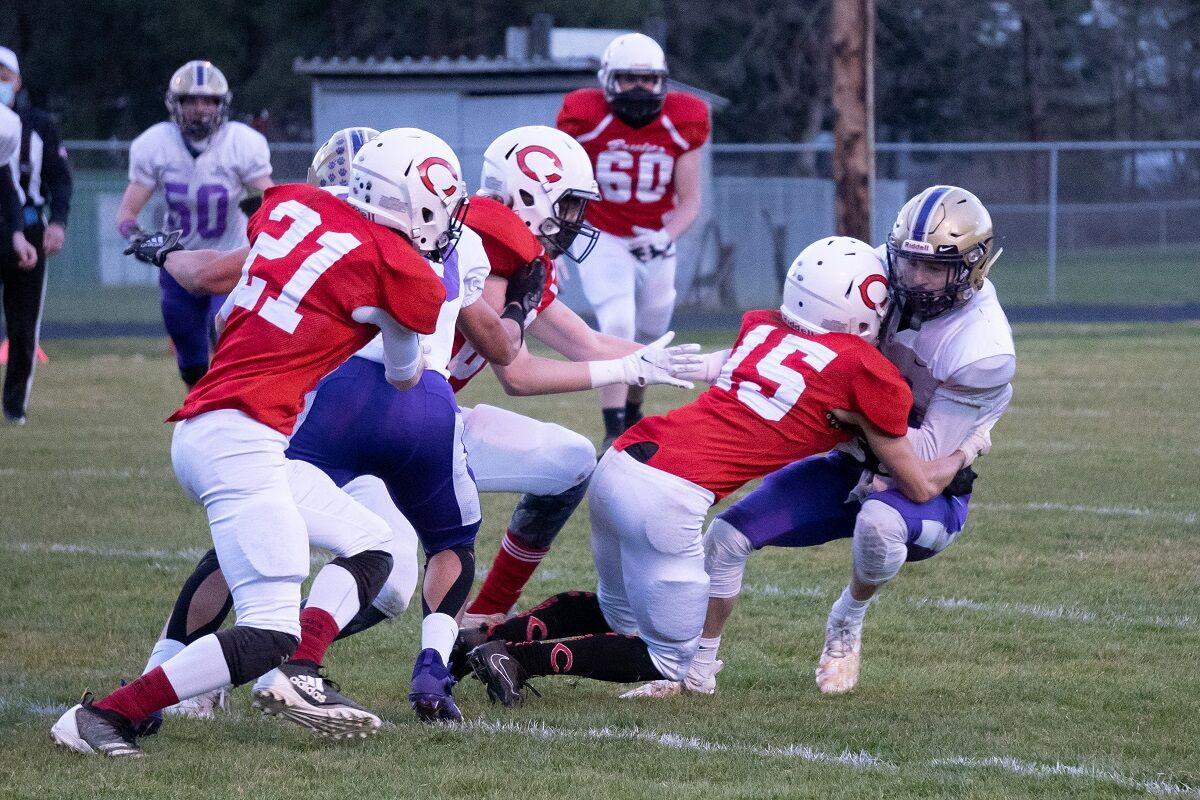 Senior running back Austin Charters fends off defenders on his way to the end zone.

Junior defensive back Chase Colloton breaks up a Goldendale pass towards the end of the second quarter.

The Columbia High School football team finished its season with a 28-14 victory over Goldendale last Friday.

The Bruins have now won six straight games in the Klickitat County series.

Columbia’s defense set the tone of the game early, as Goldendale drove to the 1-yard line on its opening possession, but the Bruins stuffed the Timberwolves on consecutive runs up the middle for a turnover on downs.

Bruins senior quarterback Garrett Hogberg completed a 12-yard pass to junior back Jace Greenwood for some breathing room. A few plays later, Hogberg handed off to senior running back Austin Charters who took it 55 yards to the endzone, breaking two tackles before outrunning the rest of the GHS defense. CHS missed the extra point for a 6-0 lead late in the first quarter.

Midway through the second, with the Bruins driving, Charters exited the game after aggravating a hamstring injury he had been nursing for weeks. Greenwood replaced Charters and rushed for 26 yards as the Bruins drove for their second touchdown, an end-around from the 5 taken in by senior receiver Angel Sánchez. Minutes later, junior defensive back Chase Colloton jumped a pass from Goldendale’s Kade Bomberger for a walk-in pick six and a 21-0 halftime lead.

“We’ve relied on Austin Charters a lot in the last three years and for him to not be able to go full go and for us to continue doing what we’re doing, have some guys step up catching the ball and throwing the ball, getting some turnovers when we needed it — I can’t be more proud of them,” CHS coach Dan Smith said.

Goldendale senior Nick McKune set up the Timberwolves’ first score in the third with a long punt return. Greenwood saved a likely touchdown by pushing McKune out of bounds at the 19.

The Timberwolves looked to be building momentum as rain started falling and GHS parents’ cowbells started ringing. After recovering a CHS fumble to start with good field position, Goldendale turned the ball over on downs when CHS senior defensive back Mason Cooper made a leaping play to knock down a pass inside the 10.

After a three-and-out by the Bruins and several chunk runs, Goldendale junior running back Caleb Smith broke free for an apparent 30-yard touchdown run. The play was called back for a block in the back, however, and the drive sputtered out for the Wolves.

Goldendale forced three fumbles on what would be CHS’ final scoring drive, but the Bruins recovered all three and Hogberg scored on a keeper from a yard out. Goldendale would answer with a short rushing touchdown by Smith and a forced punt before Cooper sealed the game for CHS with an interception.

The Bruins finished with 216 yards of offense, 98 of which came on passes from Hogberg. Hogberg, who hadn’t played football since eighth grade, said the passing game picked up in Charters’ absence.

“It’s a great feeling to come out here with your friends that you build relationships with all the time — in school, out of school, other sports — it’s good to end on a win our senior year,” Hogberg said.

Charters led the Bruins in total yards with 58 yards rushing and a 14-yard catch; Greenwood finished with 42 rushing yards in relief. Wang had two catches for 24, senior receiver Eli Nielsen had a pair of catches for 19 yards, Colloton had a catch for 18 yards and senior receiver Cody Campbell had one for 23.

Just another day at the beach for 2-0 Bruins