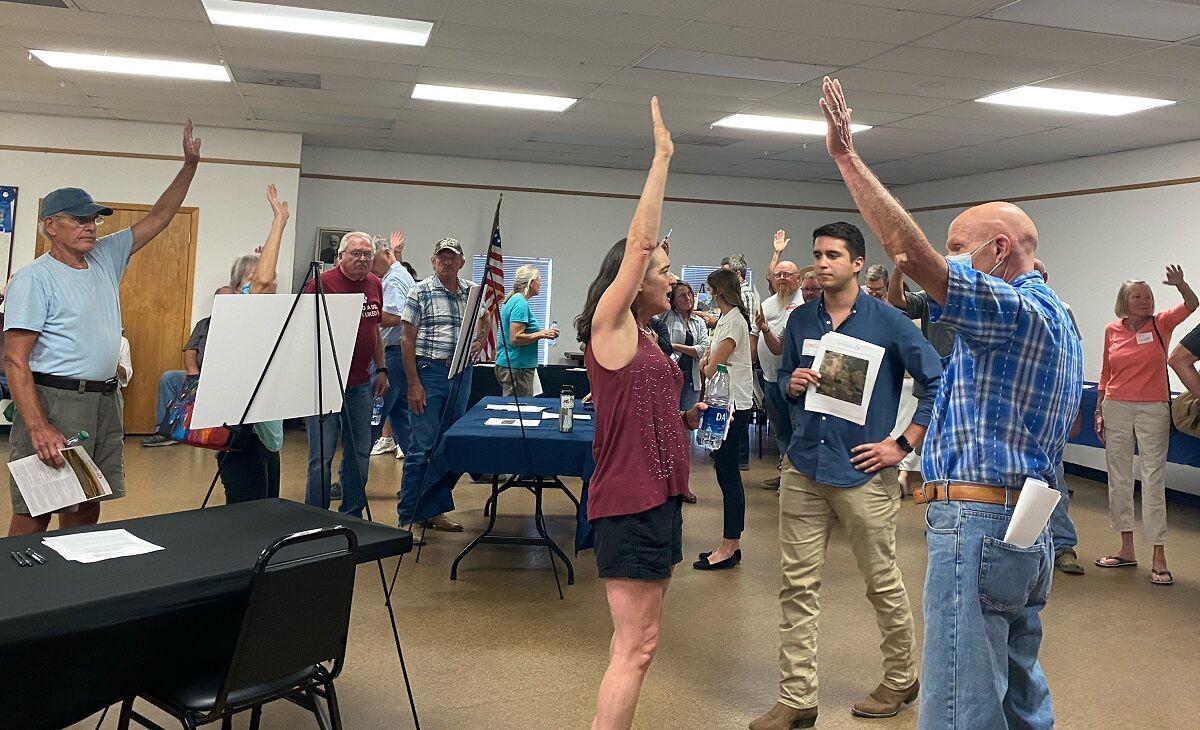 Resident Cheri Bosquet asks the crowd in the Goldendale Grange Hall to raise their hands if they are opposed to the proposed Carriger Solar Project. 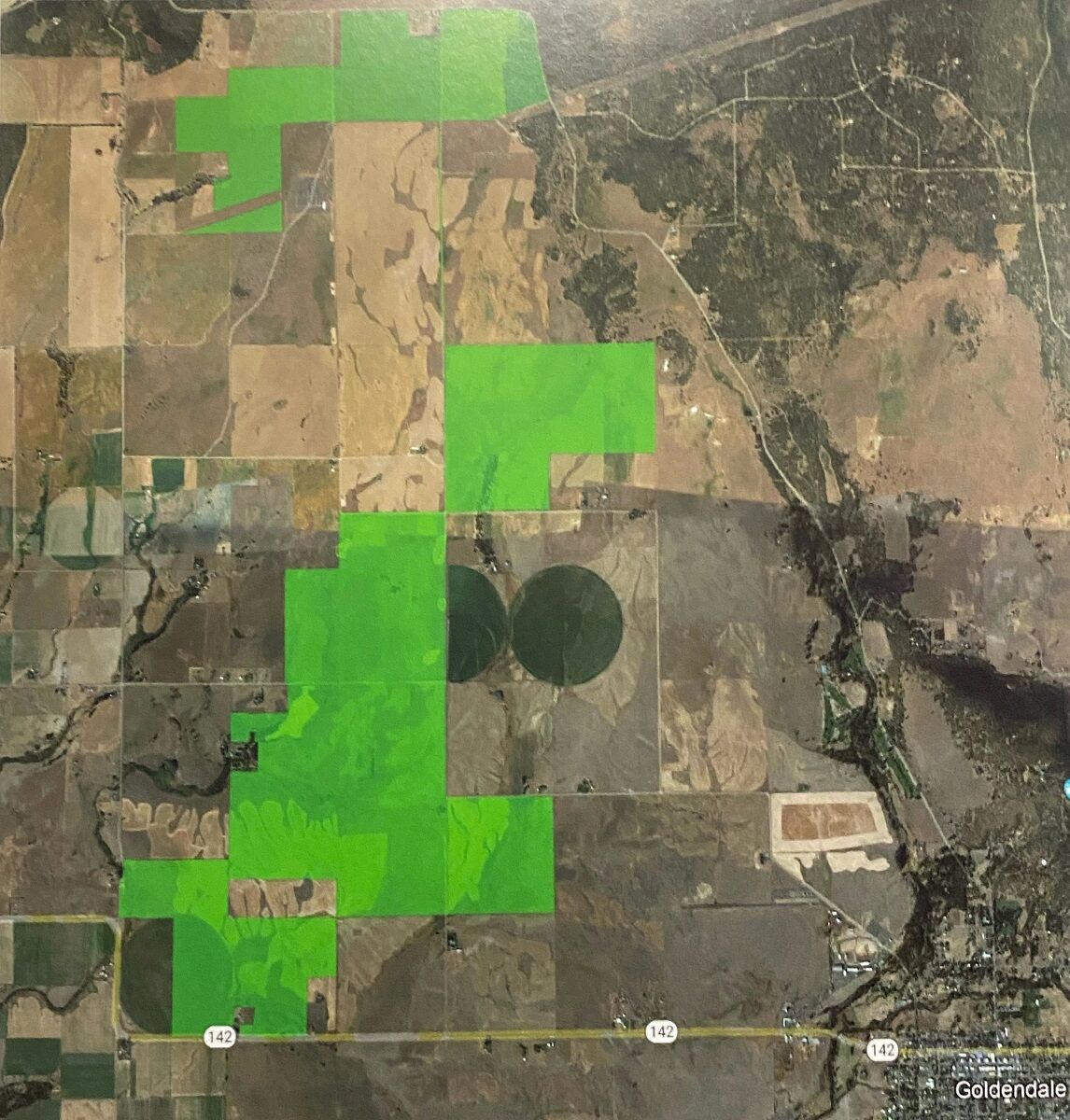 A map shows the plots of land under consideration for development by Cypress Creek Renewables.

A month after Klickitat County rescinded a moratorium on solar development applications outside the county’s Energy Overlay Zone, national energy company Cypress Creek Renewables voiced interest in constructing a solar farm outside of Goldendale in Klickitat County. The company recently held a community meet and greet at the Goldendale Grange Hall to discuss what the project may entail with residents and gauge interest from the community.

In what solar farm opposition group Citizens Educated About Solar Energy (CEASE)’s founder Greg Wagner labeled a “divide and conquer” style of meeting, representatives from Cypress Creek Renewables were posted at different stations around the grange meeting hall earlier this month, fit with graphics and presentations of what their proposal for what they’re calling the “Carriger Solar Project” entails. Each station detailed different aspects of the project, from the areas of land they were considering developing to the environmental permitting they would be undergoing, should the company decide to move forward with the development.

While county Planning Director Mo-chi Lindblad confirmed the company has not yet applied for any permitting, should the company take steps toward the project’s approval, it may become the largest in the county in terms of energy production.

Cypress Creek Project Developer Romeo Solis said the company is studying land within the county’s EOZ to site their project, proposed to generate up to 160 megawatts of solar capacity and up to 63 megawatts of battery energy storage. Land under consideration also lay outside the EOZ — specifically certain private land which would allow the project’s connection to a Bonneville Power Administration-owned substation on Knight Road, also located outside the EOZ. Solis said the project footprint and acreage will be determined based on environmental and engineering studies.

It would generate enough power to support around 32,500 Washington homes, Solis said.

An EOZ permitting process essentially bypasses scrutiny from the county’s Board of Adjustment, who would normally consider a conditional use permit application and receive public testimony. Instead, approval of an EOZ permit would come from the planning department and would require a State Environmental Policy Act (SEPA) determination of mitigated significance — meaning approval with conditions — or a determination of non-significance. Public comment would be collected through the SEPA process.

Solis did not rule out the option for the company to apply for permitting through the state’s Energy Facility Site Evaluation Council (EFSEC), which also bypasses local public testimony in favor of a council of representatives from multiple state departments who has the authority to pass on a recommendation to the governor for approval of the development.

“Obtaining a permit through EFSEC is an option for the project, but the preferred path is to obtain permitting through Klickitat County,” Solis said.

The state of Washington is becoming a potential hotspot for these types of renewable energy developments, and representatives from the company said state’s goal of transitioning to 100% clean energy by 2045 makes the market viable for these types of projects.

Noah Hyte, executive vice president of development at Cypress Creek Renewables, attended the meeting and cited the county’s rescinding of the moratorium that spurred the company’s further interest in developing the land. In pitching the project to residents, Hyte said that “solar and storage are the future of our grid.”

Wagner, who lives adjacent to one of the plots of land under consideration for development, organized a group of concerned citizens to protest the meeting. He was later ejected from the meeting after causing a disruption in the hall. He stood outside the grange, handing out flyers protesting the company’s interest in development.

Wagner told Columbia Gorge News that, should the project be realized, “I’m surrounded by prison walls.”

Wagner moved to the area six years ago after driving through the valley with his wife, taking in the beauty and deciding that the land was fit to plant roots and enjoy peaceful living. Little did he know that his residence was located in an area eyed by solar farm developers.

Wagner does not oppose solar energy in principle, he said, but cited various concerns associated with the proposal.

For one, the land privately leased by the company is farmland, able to grow crops such as wheat. “It’s zoned farmland, it should stay farmland,” he said.

He is also concerned about the associated safety of placing lithium ion batteries near residences, citing a June 29 fire in Morris, Ill., that prompted evacuations in the area and forced firefighting crews to cover the chemical plant in concrete due to the volatility of using fire and foam to fight the fire.

In response to a question on the safety of such batteries, Solis said the batteries must pass a series of stress tests to ensure safety in transport, and to prove that they will not catch fire even under extreme conditions.

“Systems are equipped with a sophisticated Battery Management System that automatically corrects for any irregularities in current, voltage, or temperature at the individual cell level. As a failsafe, containers are equipped with fire suppression systems. Energy storage system designs are containerized and sealed to prevent any leakage of materials. Containers are locked like other equipment on our solar sites to prevent unauthorized entry,” Solis said. “Residents concerned about the proposed project should know that Cypress Creek works with its suppliers to ensure our energy storage systems are built with safety as the number one priority. Lithium ion batteries are a proven technology used in over 94% of all grid-scale projects in the United States.”

Residents also fear the drain on property value should the views be obstructed by 14-foot solar panels. And while Cypress Creek noted at the meeting that the project would raise between 15-25 million dollars in revenue over its 40-year lifespan, residents argue the funds are not worth it considering the project is estimated to create between two to five permanent jobs.

Asked what the company got out of the meeting, Solis said that “we enjoyed meeting community members and appreciated the opportunity to address questions. We had a very good dialogue with residents and we now have a better understanding on the community’s concerns and hopes for the project. We look forward to continuing to work with the community and county representatives to ensure the project has a positive impact on Klickitat County and its residents.

“We will remain available to the community and encourage community input during every phase of development. If anyone would like to get in touch please reach out to carrigersolar@ccrenew.com.”

Weed of the Month: Puncturevine

How to live sustainably: An overview of ‘The Doughnut Economic Theory’