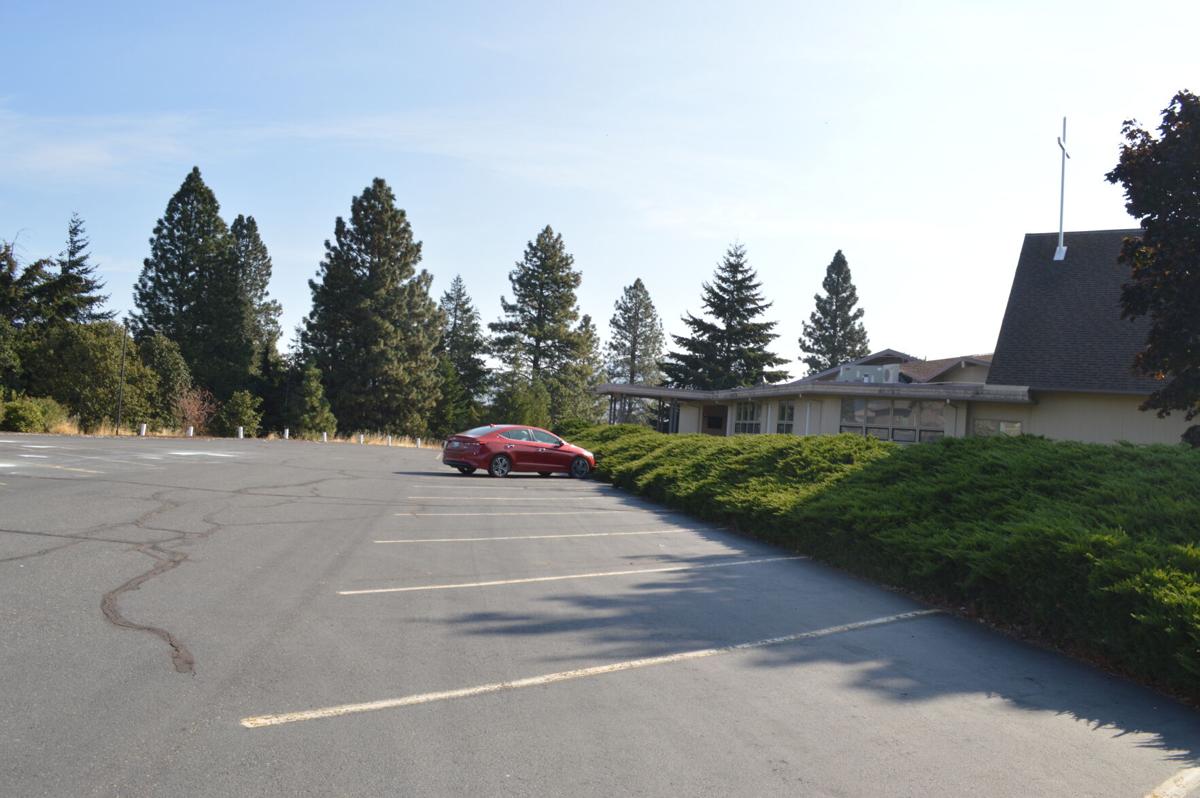 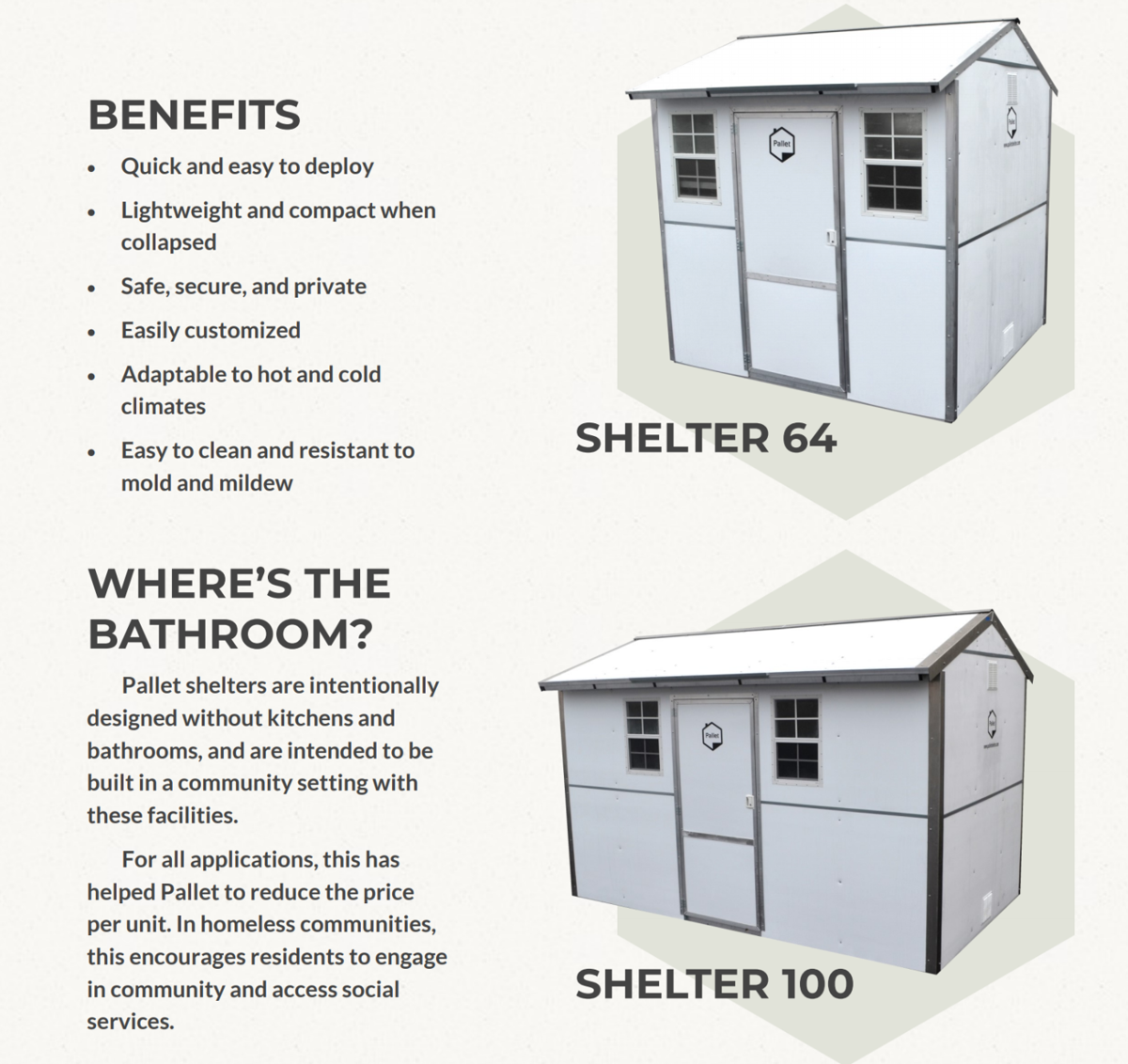 A snippet from an informational flyer on Pallet's mobile shelters, available in two sizes (64 square feet, designed for one occupants, and 100 square feet, designed for two to four occupants). Hood River Shelter Services will deploy 15 of the Shelter 100 models in the lower parking lot of Hood River Valley Christian Church this upcoming shelter season, November through March; and The Dalles is still looking for a location to set up of the five Shelter 100 models.

A snippet from an informational flyer on Pallet's mobile shelters, available in two sizes (64 square feet, designed for one occupants, and 100 square feet, designed for two to four occupants). Hood River Shelter Services will deploy 15 of the Shelter 100 models in the lower parking lot of Hood River Valley Christian Church this upcoming shelter season, November through March; and The Dalles is still looking for a location to set up of the five Shelter 100 models.

Winter warming shelters provide an invaluable service to the area’s homeless population, but the COVID-19 pandemic adds another layer of difficulty to operations that primarily rely on donations and volunteers to keep going: Their operating space is too small to accommodate social distancing.

While the Hood River Warming Shelter has operated out of Riverside Community Church for three years, “the space at Riverside is simply too small to accommodate us during the pandemic because we would not be able to meet the social distancing or updated health and safety guidelines in that space,” said Director Sarah Kellems in an update at a recent Port of Hood River Commissioners meeting.

The Dalles HOPE Warming Place Shelter, operated by St. Vincent de Paul, has a similar problem with their West Third Street location. “When it’s not COVID, we can only fit 18 people in here,” said St. Vincent DePaul’s Karryann Childers. With social distancing measures in place, that number drops to six or seven.

Both communities found a partial solution in an Emergency Solutions Grant (ESG) from Mid-Columbia Action Council, which gave the Hood River and The Dalles shelters funds for five outdoor Pallet shelters each.

Pallet is a building company that specializes in building small standalone shelters — roughly 100 square-feet each — to help people experiencing homelessness transition to permanent housing. Each shelter is insulated with a secure ventilation system, has a folding bunk bed system that can accommodate up to four people (or two with social distancing measures in place), and can be made ADA accessible. The shelters don’t include bathroom facilities or kitchens, and are intended to be used in a community setting where those facilities are available elsewhere on site.

“The company doesn’t have sites in Oregon, so they’re pretty excited to work with us,” said Darcy Long-Curtiss, a member of The Dalles City Council who is working as a volunteer to help set up a warming shelter program for the upcoming cold weather season.

“I wanted to explore that grant with The Dalles so we could better combine resources to meet the needs of our region,” said Kellems in a recent interview.

With public health organizations recommending that shelters switch over to non-congregate sheltering models due to COVID-19, the Hood River Warming Shelter pieced together a funding package from additional sources to purchase 12-15 of these pallet shelters, with the intent of setting them up in an open-air location with either an existing building or mobile unit on site to accommodate check-in and to mobilize the services they normally offer at Riverside, such as providing meals, clothing and bedding.

The Warming Shelter is working with the Hood River County Health Department with support from Providence to ensure that their setup is safe for shelter patrons and staff, Kellems said.

The shift to a non-congregate isn’t the only change the Hood River Warming Shelter will implement this season: While operations have historically depended heavily on volunteer support, volunteer roles this year will be limited to background support, while paid Warming Shelter staff do all of the on-site work. Staff will be on site at all times during operating hours, Kellems said.

Last year, the Hood River Warming Shelter had an average nightly guest count of 19, Kellems said, and there were a couple of nights where the guest count went as high as 25. The Warming Shelter will enforce a 30-guest cap this season, and while Kellems doesn’t anticipate having to turn anyone away based on past numbers, she said she’s working to establish a concrete referral process in case they do have to turn anybody away.

“I think one of my goals with all of the unknowns that we have in our lives at this time is to have that referral process really clearly articulated before we open our doors in November … so if we have to turn someone away, we have somewhere to turn them to,” Kellems told the port commission.

After weeks of searching for a site, the Hood River Shelter Services has partnered with the Hood River Valley Christian Church to set up in their lower parking lot for the 2020-2021 shelter season, mid-November through mid-March.

“It’s been a very difficult search,” said Kellems, adding that finding a site for warming shelter services is difficult in normal conditions, and COVID-19 has only complicated that search.

"This decision made by the church's board came after multiple conversations with one another and the Executive Director of Hood River Shelter Services," said the church in a recent newsletter to patrons.

Shelter Services has also notified the surrounding neighborhood and nearby Westside Elementary about the new shelter site.

"We are truly grateful to the Church Board, Pastor Alicia Speidel, and the congregation for opening their space, and their hearts, to our program," said Kellems in a recent Shelter Services newsletter.

Over in The Dalles, Long-Curtiss is still struggling to find a site to place the five Pallet shelters funded by the ESG grant — and somebody to manage them during the cold season.

“My whole plan was to get it ready and hand it off to somebody who’d have it ready at that point,” said Long-Curtiss, “My hope by now is we would’ve already secured a space and somebody would have come forward.”

Long-Curtiss said that she is working with the city manager to establish written rules and regulations for the Pallet program, adding that she hoped the regulations would help ease people’s concerns about volunteering or leasing out their property for the Pallet shelters.

“This is for people who are local … and just like we used to help them inside when it was cold, now we’re going to help them this way, because COVID-19 makes it unsafe to do this inside.”

Long-Curtiss added that she intends for the Pallet shelters to be open every night of the cold season, and that she hopes to provide the support necessary for the shelters to serve as a route to permanent housing, similar to the Gorge Outreach program that began in the early days of the pandemic (see the Sept. 30 Columbia Gorge News A1 article for details).

The Dalles residents aired their concerns about having a homeless shelter in their neighborhood at a recent city council meeting, where community members who live in the neighborhood surrounding St. Vincent de Paul gave public comment about a variety of problems caused by St. Vincent patrons in the area, including disorderly conduct and public defecation.

“Mill Creek is a garbage dump from Second Street to the Mill Creek bridge. My wife and I alone have called the police over 20 times in the last few months. How is this acceptable?” said one community member. “The issues are ongoing,” said a neighboring property owner, “I hear every year that they’re making changes, they’re doing things to try and improve the situation, and it’s just not getting better, and I think that’s why the neighbors are wanting the city council to step in.”

Said another community member, “St. Vinny’s and homeless issue isn’t going to go away for this winter, and winter is just around the corner, so we have short and longterm issues that need to be addressed and I’m hoping the council will step forward immediately and try to address the short term — like we’re talking a month and a half that these people are going to be on the street, and I do empathize with the neighbors that have to live around homeless people who are not picking up, and that’s why this is a bigger issue that needs to be supported by the city … this is a group effort and it’s not going to be done by just one entity.”

While the HOPE Warming Place was open every night mid-November through mid-March last year, the shelter will only be open during extreme low temperatures this year. “Just financially, we couldn’t take it on again,” said St. Vincent’s Executive Director Dave Lutgens.

St. Vincent’s currently operates a food bank and provides Bread and Blessings meals weekday mornings and community meals weekend evenings. In line with social distancing regulations, only 10 people are allowed into the building at a time, and nobody is allowed entry without a mask. Most people eat outside, Lutgens said — which will pose a problem when the weather turns. “I’m hoping that we’ll come up with something,” Lutgens said.

St. Vincent’s will not operate the Pallet shelter program, said Long-Curtiss. Lutgens said that they are still working to finalize their plans for the upcoming cold weather season.

The city council took no definite action on the issue at that meeting, but Long-Curtiss said she hopes that if she is unable to find somebody willing to take on the Pallet program, that the city would agree to partially sponsor it. Even if the city agrees to sponsor the management and operation of the Pallet shelters, they still need a place to put them.

Long-Curtiss called it an “ASAP kind of situation.” Anyone with flat land, such as a parking lot, in The Dalles that can be used as a site for the five Pallet shelters is encouraged to contact Long-Curtiss at dlong-curtiss@ci.the-dalles.or.us or 541-980-7184.