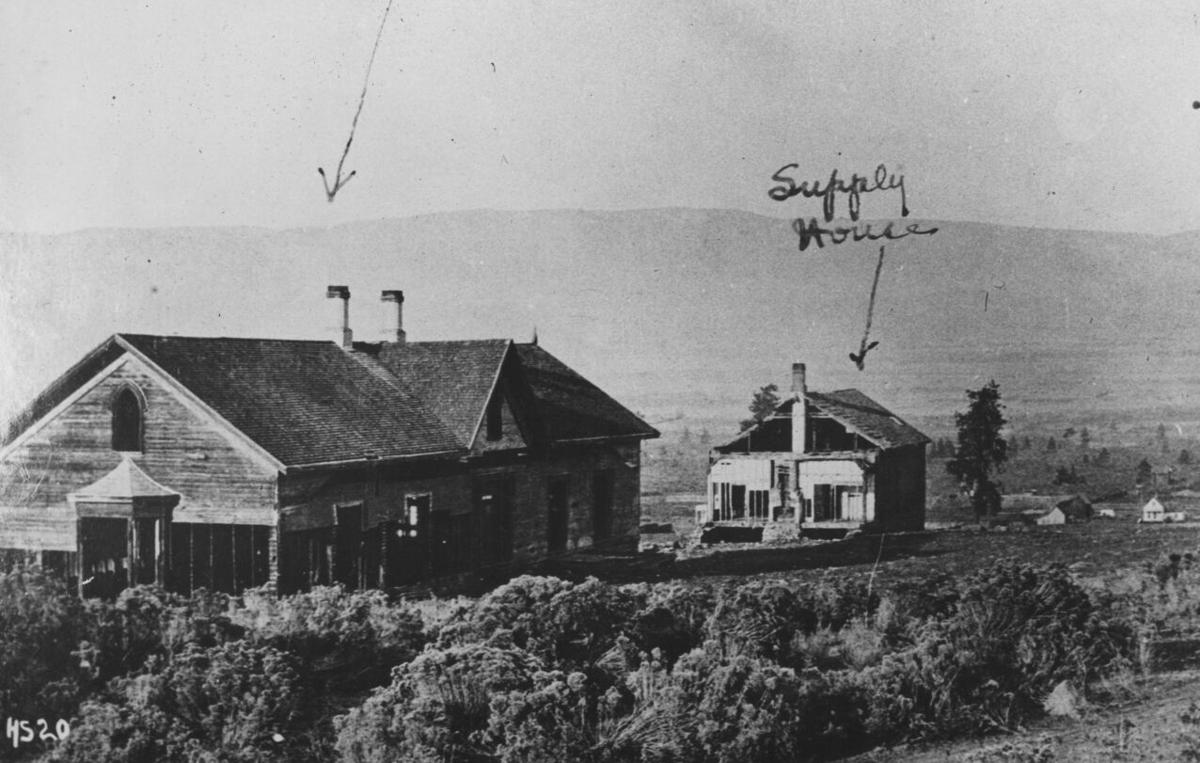 Ruins of Old Fort Dalles are pictured about 1940. The first regular soldiers to be here at Fort Dalles were members of Loring’s regiment, which had come across the plains. They built some log houses that were added to from time to time. The government realized the strategic importance of the location and approved construction in 1856. 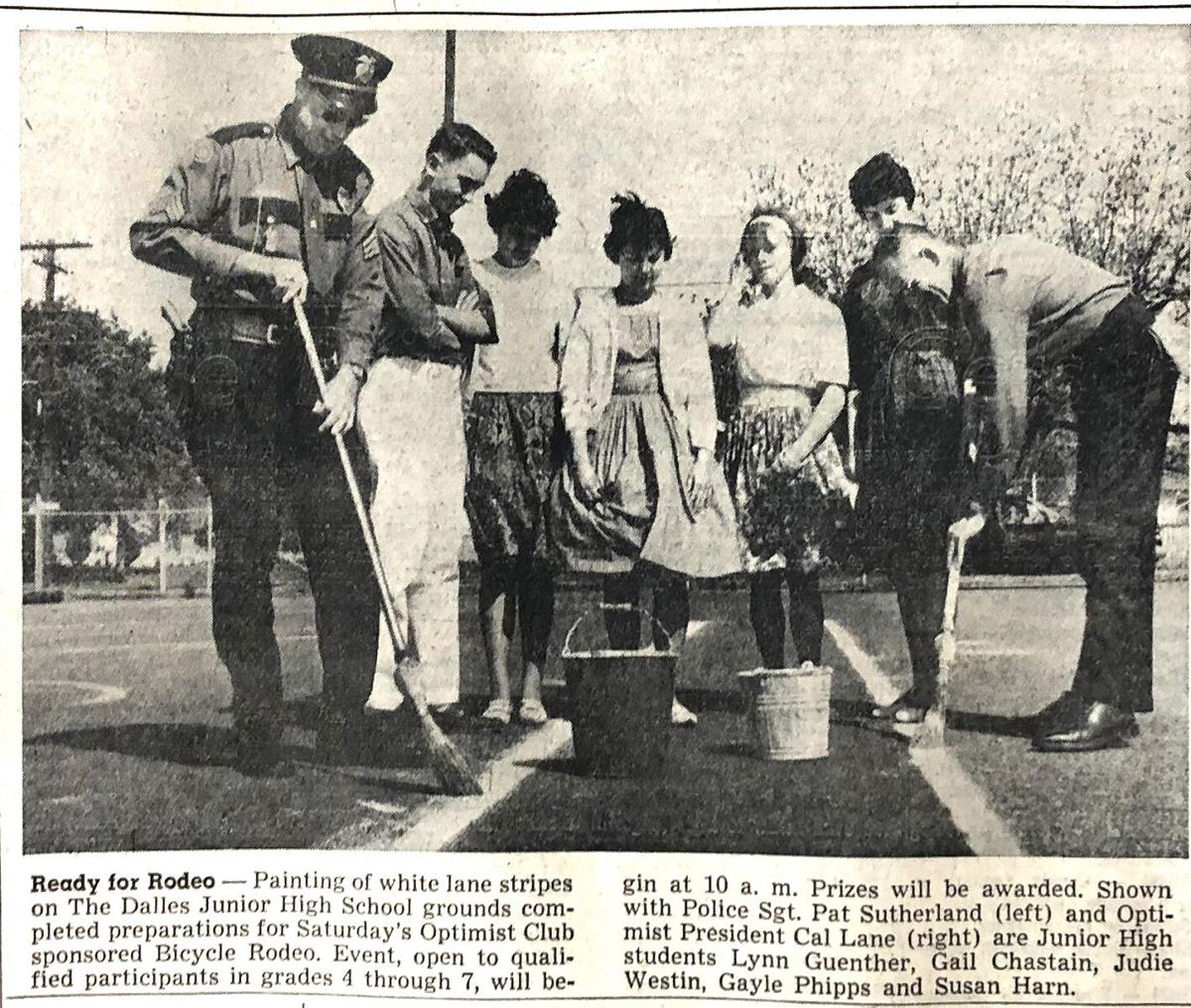 Fred Vogel, of Wyeth, was in Hood River last week displaying a new auto rim which he has invented and on which he has already secured full patents. He has sold half of his interest to F.W. Schultz, of Eugene, at a price, it is stated, of $10,000. The main feature of the rim is that, by two hinges, it can be easily released from the tire, thus enabling a change or repairs to be made in a few minutes. Mr. Vogel is also the inventor of a railroad jack, from which he draws a comfortable royalty. — Hood River News

With testimony concerning 143 different water rights in the White river water shed written into the court records during the last two weeks, attorneys working on the various angles of the litigation today expressed belief that final work will be completed either this evening or tomorrow. — The Dalles Daily Chronicle

Construction work on the new Dalles City municipal airport at Dallesport is expected to get under way here about May 15, Mayor Norval G. Martin reported today following a recent conference in Portland with Paul Morris, regional engineer of the Civil Aeronautics Authority, and Superintendent Deyereaux of the WPA. Sam Guess, resident engineer of the United States army engineer corps, was in The Dalles last weekend looking for a place in which to establish residence, Martin said. — The Dalles Daily Chronicle

Ordered by the city council to push hard at the town’s cracked and broken sidewalk areas, City Engineer Hal Puddy put out another appeal to property owners for cooperation on the project this week. Administrator Puddy noted that city ordinances require that property owners be responsible for maintenance of their sidewalk areas to city standards. He said notices are being mailed to those residences where inspections reveal those standards are not in force at present. — Hood River News

Bids will be opened May 17 for the alterations and an addition to the Chenowith upper school Invitation to bids was published yesterday. This is one phase of the Chenowith school expansion program made possible by voter approval of a $533,000 bond issue March 27. It will include addition of five rooms on the east side of the school building, conversion of the present library to classrooms, and construction of a new library about double the size of the present one. — The Dalles Daily Chronicle

The Cloud Cap-Tilly Jane Recreation Area has been entered into the National Register of Historic Places, according to Rep. Denny Smith. Listing in the national register makes the property owners eligible for federal grants-in-aid for preservation, administered by the states as part of their historic preservation programs. The newly-designated area is southwest of Cope Spur Junction off the old Mt. Hood Loop road. — Hood River News

Marine Biology, Indian culture, ocean beaches, the Olympic rain forest, as well as the opportunity to be away from home and living with their fellow students and teachers for four days, were among first-hand learning experiences gained by Dallesport School fifth and sixth graders this month. Fifty-seven students and 14 teachers and parents took a trip to Neah Bay on the edge of the Olympic Peninsula, the first time an overnight trip was organized at the school. Learning experiences tied into students’ curriculum. Each student made a notebook covering the different subjects. Student Scott Tuthill said his favorite part of the trip was finding a purple sea urchin on the beach and he added that is one place that he’d definitely like to visit. White Salmon Enterprise

The very first firm figures on upcoming rate increases for Northern Wasco County PUD will be on the table tonight. Manager Bill Kotge said that an announced 53 percent rate increase by Bonneville Power Administration would translate into a local rate increase of around 25 percent. — The Dalles Daily Chronicle

“Hatred and anger is bad for your stomach.” That’s what Alice Kern told a group of students at Wy’east Middle School on Thursday. As one of a dwindling number of Holocaust survivors, Kern knows a lot about hatred and anger. “I had to learn very hard, because I was very angry,” said Kern. “But I learned to leave the anger and hatred and do something good.” Kern, who lives in Portland, spoke to more than 100 captivated students in the school cafeteria about her youth in Sighet, Romania, and her year in the Nazi death camps of Auschwitz and Bergen-Belsen during the last year of World War II. — Hood River News

SDS Lumber Co. is moving fast to bring new power generation systems on line in Bingen. Last week, SDS President Jason Spadaro told members of the Bingen City Council that three power generators were ready to be switched on and start producing electricity as of April 18. The generators will operate over a temporary DOE air quality permit that is valid for two months. SDS also is bringing a portable boiler to the mill site, which will run on natural gas, burning wood as its primary source of fuel. — White Salmon Enterprise

Although Wasco County Planning Department’s new director hasn’t had time to move into his new office, Todd Cornett has begun tackling his new duties with the same energy and enthusiasm he had as the county’s senior planner. In fact, Cornett will be performing both jobs — director and senior planner — until the county hires a new planner to fill his spot. — The Dalles Chronicle

American Legion auxiliary ladies gathered at the home of Poppy Day Chairman Iris Hay to assemble the little red flowers to be sold here May 27 to raise funds for aid of disabled veterans and their families.

The poppies are made by the disabled veterans, then distributed to the Auxiliary posts, where the ladies take charge of the sales.

The veterans make the poppies by hand, assembling the stamens, petals, stems and labels from parts they make by the millions.

Poppy Chairman Mrs. Hay says that new uses have been found for the poppy sale proceeds.

Then Mrs. Hay urged all local residents to watch for the poppy salesmen May 27.

Float Boxes Are Damaged By Fire At Tie Plant Here

Originating from a spark from a welder’s outfit, fire burned and singed four submarine net float boxes at the Forest Product treatment company plant here yesterday. The blaze occurred about 3:30 yesterday afternoon on the assembly line. The assemblers had completed their day’s work on the floats concerned and welders were finishing the job when a spark apparently ignited some burlap which is used in wrapping two-inch eye bolts.

The welder, his head under a hood, and eyes covered by dark lenses, was unable to see the small blaze until it had reached greater proportions and had obtained a good start underneath one of the boxes.

The four boxes were damaged to such an extent that they will have to be rebuilt.

Crowd Kneels As Four Are Executed

Early Life In Community To Be Portrayed

Battle For Mediterranean Getting Under Way