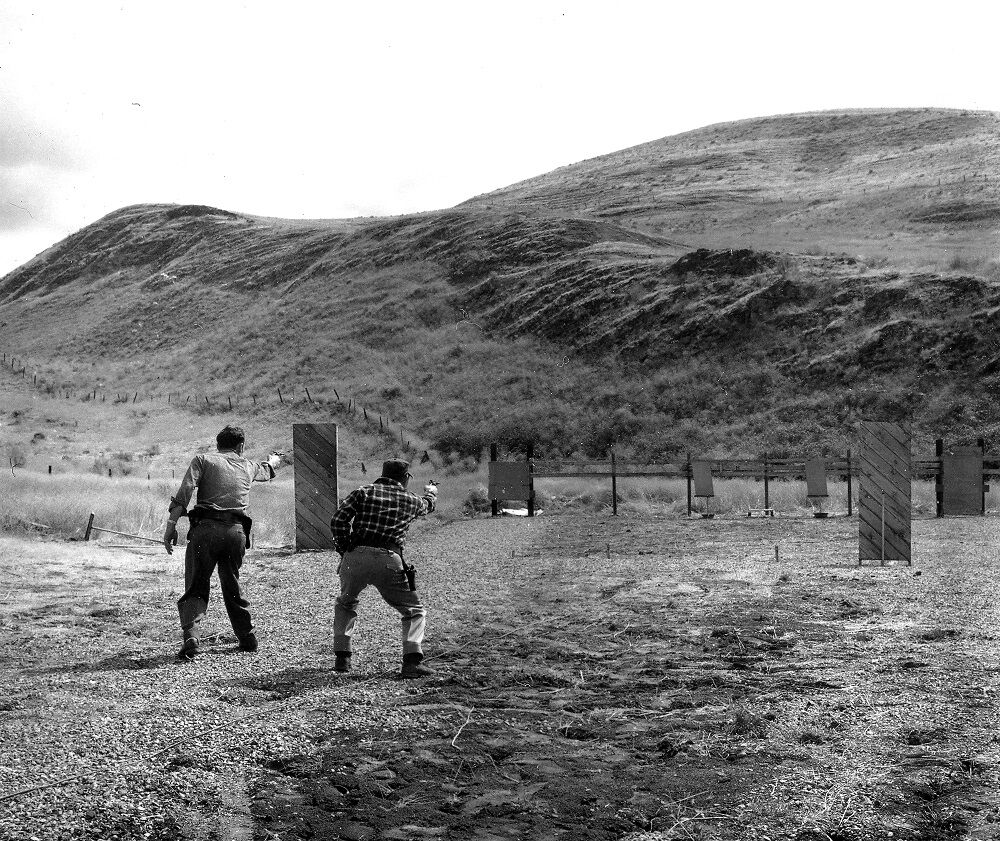 Members of The Dalles Police Department work on the shooting skills at the city’s firing range Sept. 20, 1959.

Romance and adventure on the big screen is advertised at “The Casino” in The Dalles. 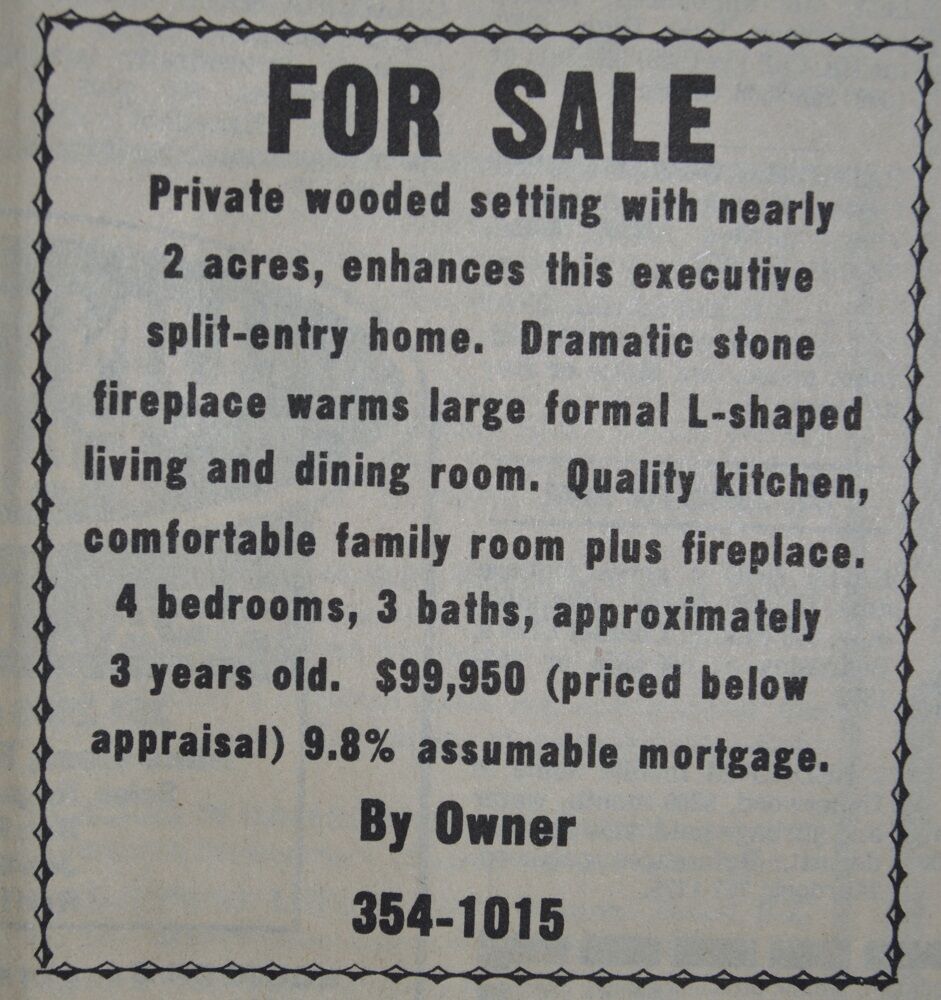 The Bible School of the First Christian Church has increased to the extent that an additional room is needed in order that the work may be done in the most satisfactory manner. The material is on the ground for the finishing of the basement, which is to be turned over to the Primary and Junior departments. The foundation for the new parsonage is laid on the church property just north of the church on Ninth Street. — Hood River News

A new innovation has been adopted as continuing policy by Hood River County Court. The plan provides for the conversion of all land on the banks of the Hood River owned by or to be acquired by the county, into permanent camping sites. As is already known to not too many residents, the county court, some time ago, created a large tract of land on the bank of the East fork, at what is known as the old toll gate, into a very attractive area for picnics and camping, and other sites will be added in this and coming years. — Hood River News

Stressing the importance of the pending nation-wide wheat quota proclamation, Ralph V. Miller, assistant secretary of the Wasco County Agricultural Adjustment administration, announced today the time and place of a series of referendum meetings to be held in the near future ... Both Steen and Ludwic asserted that farmers must “get out and vote on May 31.” They pointed out that no loans will be made unless quotas are authorized. Wheat loans have been underwriting the price of wheat and otherwise stabilizing the market, it was declared. — The Dalles Daily Chronicle

“How far can we go with this spot zoning? That’s the only thing that really worries me and I don’t mind saying so.” With that explanation, City Councilman Bob Flint cast the “no” vote that seemed, momentarily, to be the city council approval of a “spot zone” on lots 7, 8, 9, 10, 11 and 12 of Puddy Park edition. After passing the first reading, Flint’s vote killed passage of the second reading. The action was the aftermath to a stormy hearing held two weeks ago in the council chamber on a proposal to change all of the west side R-1 zone to the lower R-3 designation. — Hood River News

“Crazy Daze” activities got under way in The Dalles this morning with the business district seeing large crowds of shoppers milling around through the sidewalk displays and retail stores, complete with outstanding merchandise values and costumed clerks emphasizing the city’s most popular annual event. — The Dalles Daily Chronicle

Memorial Day Monday will be commemorated with two services organized by the United Veterans County Council of Hood River. The traditional Hood River Bridge program will start at 8:45 a.m. with a parade assembling at the intersection of Front and State streets. Services at Idlewilde Cemetery will start with a parade from Pacific Avenue north of the Hood River Shopping Center at 9:45 a.m. and a ceremony on the grounds at 10 a.m. Tom Walston is master of ceremonies for the ceremony at the Hood River Bridge. Elmer Murray is master of ceremonies for the 10 a.m. program. — Hood River News

Leaders of a consulting team responsible for finding answers to community concerns regarding a proposed hydroelectric development on the White Salmon River shared that certain key questions won’t be resolved for several months. The consulting team met with PUD officials May 6, and shared plans for studying the feasibility of the project, and in return were given notice that many local residents still are bitterly opposed to damming the river. Residents expressed their concerns that the proposed project would infringe on irrigation water rights, reduce resident fish populations, preclude reestablishment of anadromous fish runs and provide more power than the county really needs. Project Manager Paul Terrell said his team would be using the original 1960 proposal for seven dams and six powerhouses as only a starting point. That plan, he said, is typical of engineering practices prevalent in the mid-1950s and, while it represents sound engineering, does not address social and environmental sensitivies of the 1980s. — White Salmon Enterprise

The Dalles City Council has the water rate at its present level of $16.95 per month through June 30, 1982, in a move designed to bring the system out of the red. — The Dalles Daily Chronicle

Hood River Valley High School Chamber Singers made quite an impression Tuesday in front of the Dalai Lama and more than 800 guests at a $250-per plate luncheon at Portland’s Hilton Hotel. The choir, directed by Mark Steighner, was the only Western musical group to be part of the event, a fundraiser for the Northwest Tibetan Cultural Association and part of the Dalai Lama’s three-day visit to Portland. A group of Buddhist monks who would perform later stopped eating their strawberry shortcake and turned towards the singers. — Hood River News

Klickitat County Commissioners voted 2-0 to reject an appeal of a planning department decision to allow operation of four portable diesel-fueled electrical generators near BZ Corner. The decision means the planning department’s original determination of non-significance and its special use permit to allow the operating stands as issued. Terry and Karen Gaddis appealed the project, citing health risks, incompatibility with county residents’ lifestyles, among other reasons. — White Salmon Enterprise

The rapid rise in the waters of the Columbia river during the last several days has resulted in hurried pulling of stakes and moving of tents to higher ground by squatters who have been camping during the winter on the beach below the city.

Several small wooden shacks were swept off their foundations last night and carried down the river. Their owners had already moved to safer localities, however, and aside from losing their shelters, were not subjected to any great discomfort. Caught in an eddy, one of those shacks could be seen this morning, lazily floating over what several days ago was sandy beach. Lace curtains were still up at the windows, as if the owner of the house had abandoned the shack in haste during the night.

The river is still coming up, a rise of 2.3-feet having been recorded during the last 24 hours. The water now stands at 30/5 feet, which is already higher than it was at any time last year. The river is expected to go to the 35-foot mark or above, before the freshet is over. — The Dalles Daily Chronicle, May 19, 1921

First Crate Of Berries One Week Earlier Than Last Year

On Tuesday of this week, the last carload of apples in the Association warehouses was shipped and is now rolling Eastward.

The first crate of strawberries arrived on the following day and came from the strawberry patch of Billy Foss, close in to town. While many are reporting that the season is late this year, the records show that this crate of berries arrived at the association over a week ahead of the first crate last year, which was May 28.

It is now expected that the first carload of berries this year will be rolling about June 6, which is about the same date as the previous year. All indications point to a very big crop unless rain gets in its work of destruction. — Hood River News, May 20, 1921

Fishermen, picnickers, sightseers and anyone else interested were happy to learn today that the Mt. Hood Loop Highway, State Highway 35, is open for travel.

Highway department officials said that snow plows finally opened the highway to traffic at 4 p.m. Tuesday, after plowing through snow from Robin Hood forest camp on the north to White River on the south, some 10 miles.

The opening date and amount of snow was described as “about the same as last year, snow about normal depth.” Plows ate through snow as deep as nine feet at Bennett pass, seven feet on the Hood River meadows.

Highway officials added that both Sherwood and Robin Hood forest camps are free of snow and ready for use. — The Dalles Daily Chronicle, May 19, 1961

British Prepare a Ton of Death for Raid on Germany

Dalles High Seniors Advised To Have Definite Objectives After Graduation

‘Religious Missionary’ Blamed For Driving Son Out Of Mind