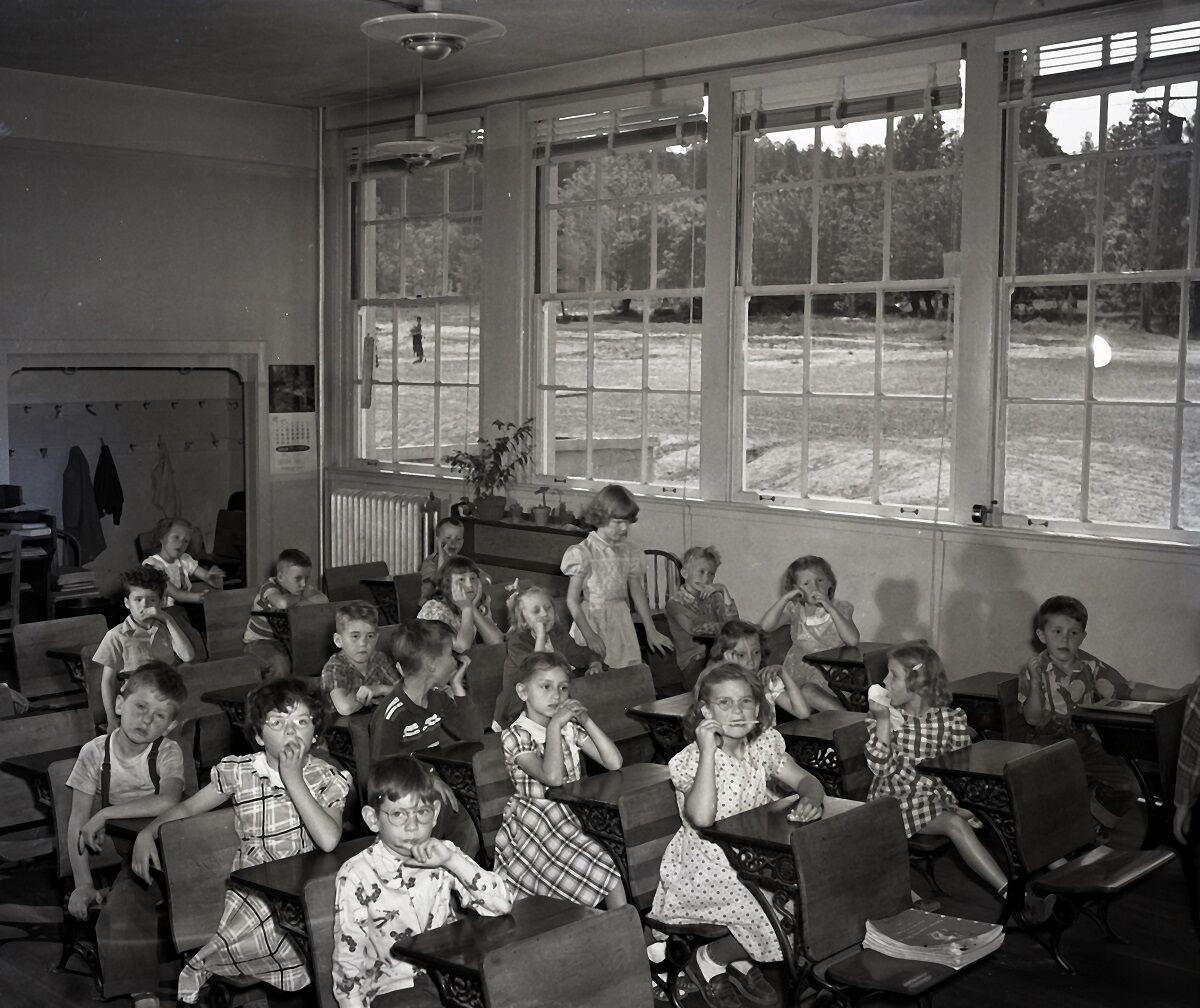 Columbia Gorge News readers Cheryl Bailey Ortega and Jayne Guidinger recognized last week’s history photograph as one of the classrooms at Colonel Wright Elementary school in The Dalles. Ortega said the classrooms on the south and east end of both floors of the school had the built-in closets, and some of them still do. She was not sure of the year, but said it was definitely taken prior to 1950, as she attended from 1954/55 to 1960/61. Guidinger said it appeared to be one of the third grade classrooms at the school. 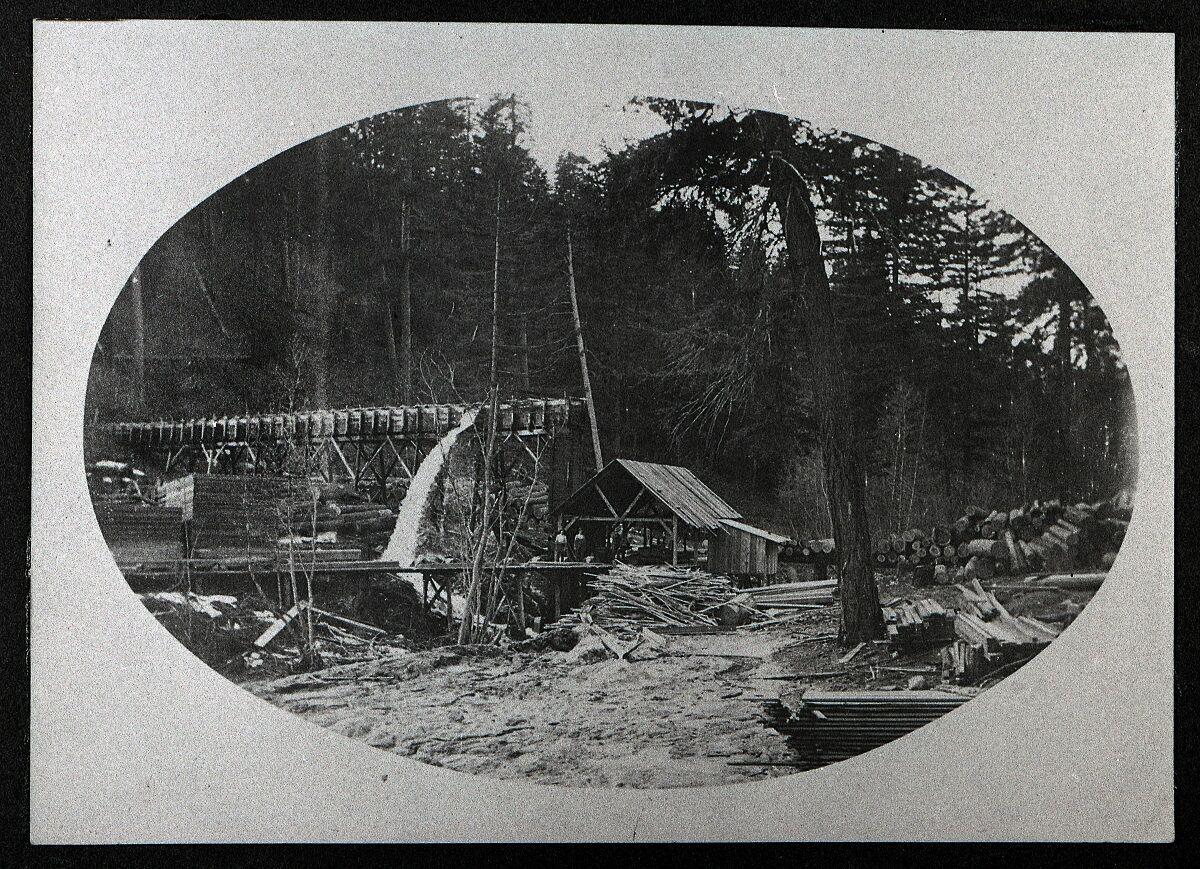 A print photographed in 1972 for a The Dalles resident features a sawmill on Five-Mile Creek, according to information on the envelop containing the 2 1/4 by 2 /14 inch negative. Year and exact location unknown. Five-Mile Creek is a The Dalles area watershed joining the Columbia River east of the downtown area. 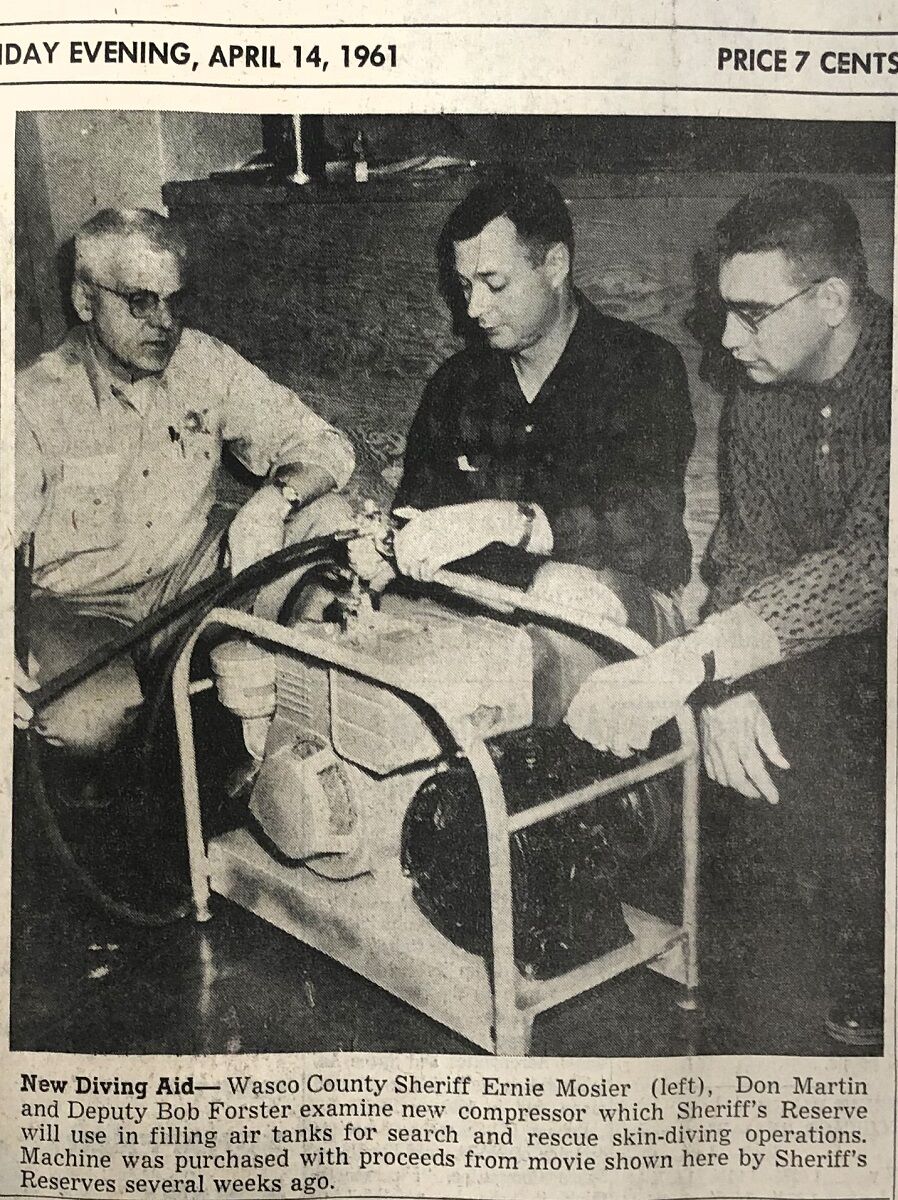 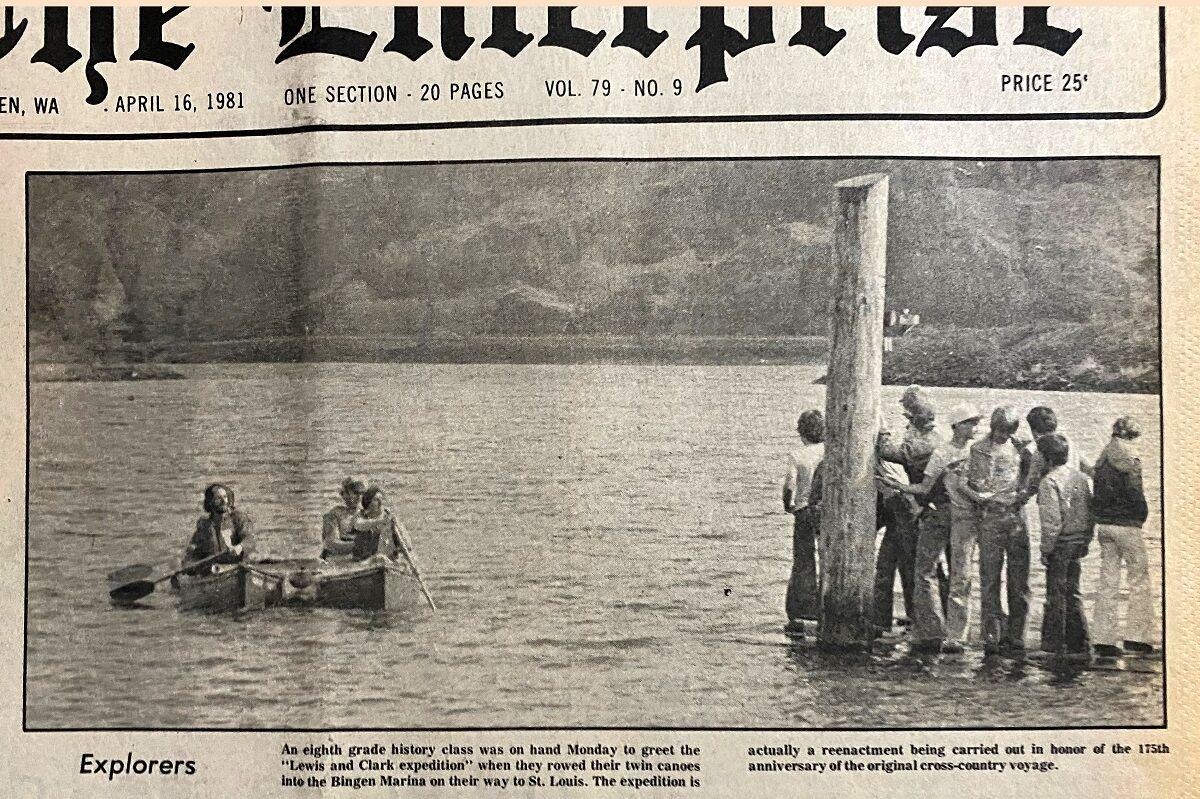 With Engineer Hurlburt in charge, work will shortly be started on market road projects in this county. The big project is at Pine Grove, where a concrete road is to be constructed by the county. This road will start at the railroad crossing, north of the warehouse, then extending south to the store and then west to the intersection of what may eventually be the new Loop Road. The county court also plans to extend the Odell Road to the Stone store, which will then leave a half mile of paving to be laid to connect it with the Loop Road — if it is built. — Hood River News

Eight nurses, the largest class in the history of The Dalles hospital, was graduated from its training school recently. It numbers among its graduates the best trained and qualified nurses on the Pacific coast. A large number hold very responsible positions in other hospitals due to the fact that personal instruction and attention has been given them during the period of their training. The training school prides itself on this particular advantage for the student nurse. — The Dales Daily Chronicle

Allan Hart is back at his old stand at the service station, corner of First and Oak streets, Hood River. As formerly he is handling Associated gasoline, oil and other products.

Snow fell in the Upper Hood River Valley on Wednesday and in some of the higher orchards, blossoms were snow-tipped. — Hood River News

North Bonneville, Wash. — Volunteers and members of outside fire departments late yesterday brought a two-hour blaze under control which for a while threatened the main section of this one-time “boom town.” Damage was estimated at $5,000 by Chief of Police John McCurdy, but flames swept through the wooden structure of the northwestern electric company and razed a former plumbing shop and home before they were extinguished. — The Dalles Daily Chronicle

Hood River County Court officials held out for “complete development of Highway 35” before any development of the Lolo Pass route is undertaken, during a tri-county forest access road discussion last week. Judge Harris Higgins said the meeting revealed strong efforts by Multnomah and Clackamas counties to get an all-weather highway into the Hood River Valley via the Lolo Pass. He said he is not opposed to a Lolo Pass project but “35 must come first.” — Hood River News

District 12 will press for a top-speed construction program to place the new Junior High School addition in service by early September following the bid opening at 4 p.m. May 11. Board members emphasized need for extra space to accommodate an expected gain in enrollment, stressed the importance of a rapid project schedule Thursday night while examining architect’s building plans.— The Dalles Daily Chronicle

Because of an exceptionally early bloom, there was some concern about damage to the tender flowers and buds. But a check later this week indicates there has probably not been serious damage yet, though the upper valley experienced some temperatures as low as 19 degrees. In that area, many orchardists turned on their air circulating fans between 10 p.m. and midnight, and lighted smudge pots about 3 a.m. Temperatures in the upper valley reportedly hit the freezing mark at 10 p.m., the just kept dropping through the night until 5 a.m. — Hood River News

Connection of the Foley Lakes Mobile Home Park to The Dalles City sewer system moved a step close Monday as the city council agreed to let the trailer park hook up to the city system without annexation. — The Dalles Daily Chronicle

An eighth grade history class was on hand Monday to greet the “Lewis and Clark expedition” when they rowed their twin canoes into the Bingen Marina on their way to St. Louis. The expedition is actually a reenactment being carried out in honor of the 175th anniversary of the original cross-country voyage. — White Salmon Enterprise

In what was described as a “win-win” move by Hood River County Commissioner Carol York, the Columbia River Gorge Commission settled a long-standing boundary dispute Tuesday. On April 10, the bi-state agency unanimously approved an uncontested change to the National Scenic Area mapping line around Cascade Locks. Last fall, a special committee of Cascade Locks City and Hood River County administrators agreed to work towards an acceptable compromise with Friends of the Columbia Gorge to correct perceived mapping errors in the NSA border around the municipality. — Hood River News

If you put for a request, the offers will come. Just ask the staff in the Forest Service’s National Scenic Area office. Approximately six months ago the Forest Service offered a “deal” to scenic area landowners who make a “written bona fide offer” selling their land to the Secretary of Agriculture — via the forest service — by March 31, 2001. According to Forest Service Area Manager Daniel Harkenrider, 186 of the 725 eligible landowners took the Forest Service up on its “deal.” — The Dalles Chronicle

The City of White Salmon is implementing a temporary prohibition of all irrigation and external use of water, effective April 18-21, 2001. The prohibition applies to all customers served by the White Salmon water system. According to a public notice issued by the city, the water conservation measures are necessary to allow the city to fill its water storage reservoirs in advance of a planned shutdown of the city’s only operating production well. According to City Public Works Director Wil Keyser, the well is being modified in hopes of getting an additional 100-150 gallons of water per hour out of it. — White Salmon Enterprise

Apple Blossoms Will Draw Many Sunday

Apple blossoms, the large pink blooms of Delicious and other red varieties, and the white flowers which denote the Yellow Newtown, will be at about their best in the lower Hood River Valley by the coming Sunday and many visitors are expected from Portland and nearby points. A number of Oregonians, who live in other sections of this state, make their annual pilgrimage to Hood River Valley at Blossom Time, for, with its background of the glaciated peaks of Mounts Hood and Adams and the dark green of the firs and pines, the orchard section of this valley is, at this season of the year, unsurpassed in its beauty by any valley in the world.

If the Mount Hood Loop highway, between Wapinita cutoff and Cooper’s Spur Junction, is not yet opened by the weekend, visitors from the Portland area will, perforce, make the out and home trip over the Columbia River Highway to Hood River and then make their tour of the valley and, if the day is fine, it will be a memorable one for all visitors, including camera fans. — April 19, 1941, Hood River News

These Selected Items Indicate What It Costs

What do things cost for schools? Here are some new teaching tools County Unit board members felt they should have this next year:

Transportation cost, 3.7 cents per mile traveled by each pupil.

Those are a few items from a fat booklet of school purchases, scheduled next year. — April 13, 1961, Hood River News

Dalles City Planning Commission this week approved a new subdivision and recommended against any more alterations of the city’s parking meter system.

Schull was asked to consider dedicating a 10-foot section of lot 1 to an alley the presently dead-ends at the west line of the subdivision.

After hearing a report from parking meter maintenance man Joe DesRochers, the commission agreed to recommend against changes in the parking meter setup.

DesRochers told the commission that his observations had led him to believe that parking meter refinements so far had not noticeably changed parking behavior in The Dalles.

The city had instigated a program on the perimeter of the downtown area in which some meters were changed from 12-minute to three- and two-hour parking. — April 14, 1961, The Dalles Daily Chronicle

Japanese Assert Pact With Russia Is Blow To U.S.

Moscow in Orbit to Greet Yuri

Bodies of airmen returned to states