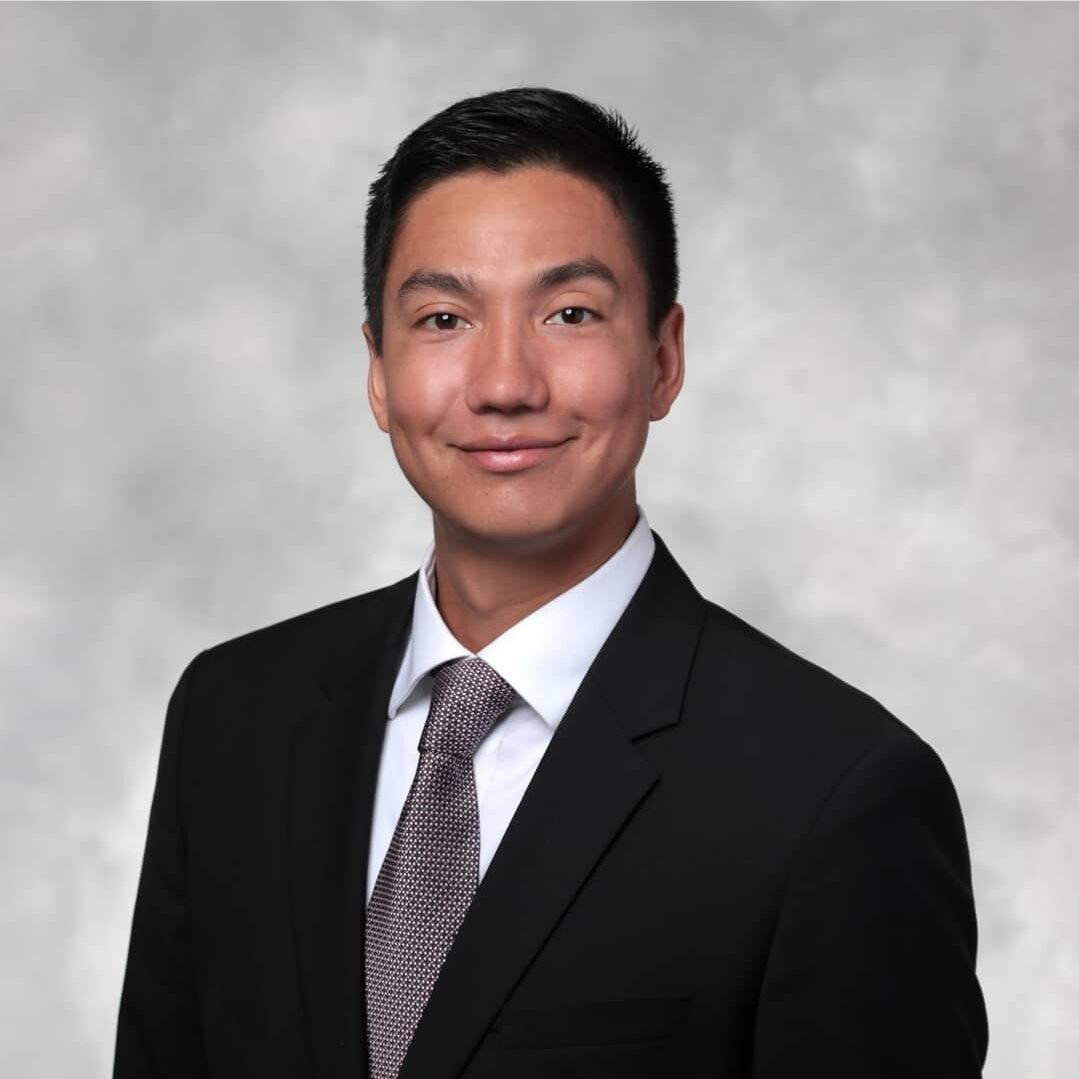 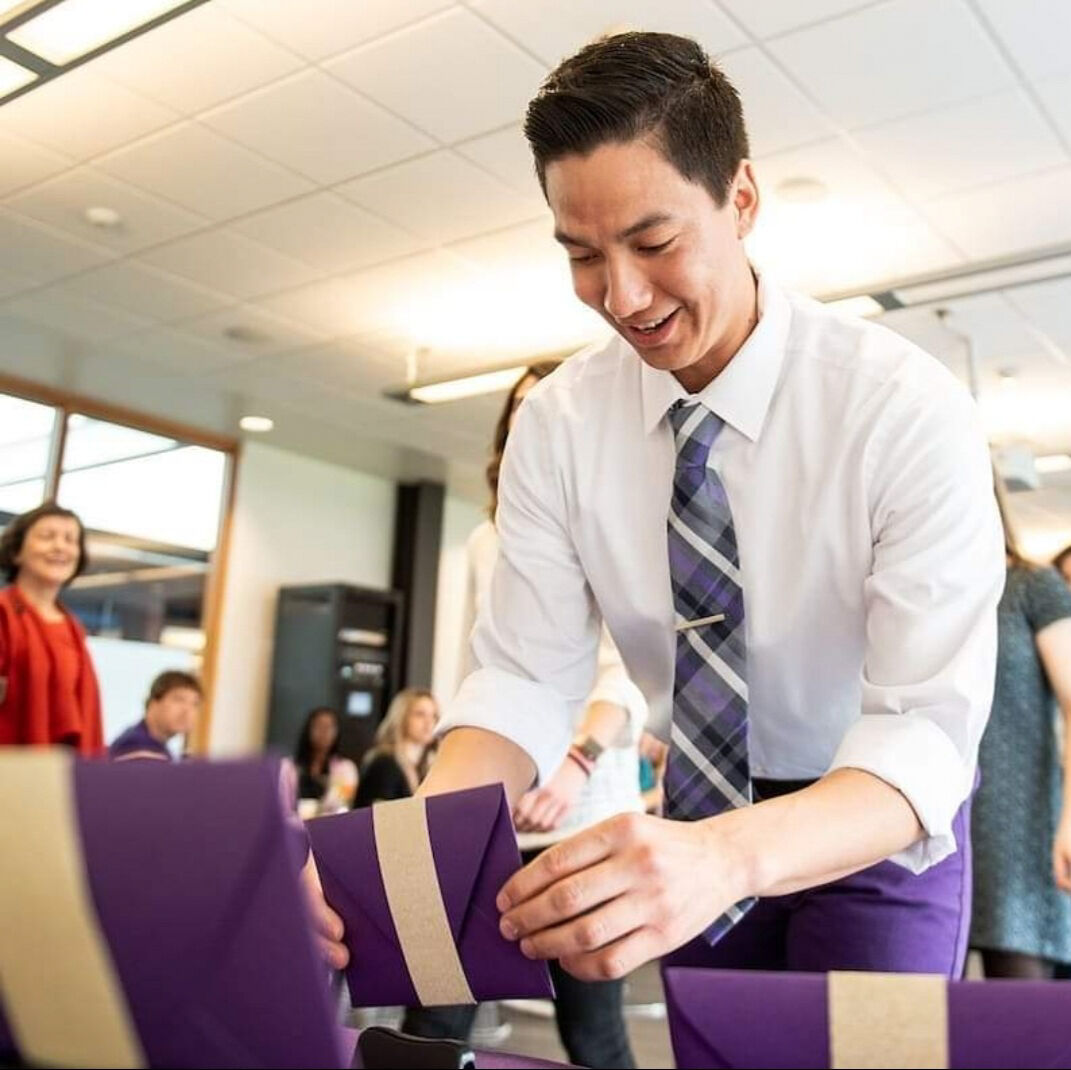 Dr. Joey Nelson sets out cards during an event. The Lyle grad encouraged graduating seniors to stay open to the possibilities.

History. Expectations. Perceptions. They can lift kids up. And, too often, they can sink kids’ hopes.

But, every once in a while, a kid comes along and listens to his own heart — and his mom. Joey Nelson was one of those kids.

Nelson grew up and attended public school in Lyle, on the banks of the Columbia River. Like many small, rural schools, Lyle High School operated on a bare bones budget, managing to provide a few extracurricular athletics along with the core academic subjects.

Some of Nelson’s peers went to college. A few high-achieving kids would go to a four-year university every year, sometimes even a highly-ranked one. For most, more often, there was a job at the local mill or a place in the military, or possibly a technical program.

Nelson is an enrolled member of the Yakama Nation, and things were even more complicated for Native students — those expectations, beliefs and history can be a difficult box to step out of. But Nelson’s family had made a few changes to those expectations and beliefs.

His mom was tough on him as he was growing up, Nelson said, but she also encouraged him to seek a life better than hers. As she put it, he was a “colored man in a white man’s world,” so he had to work hard, and sometimes harder, to achieve what he wanted.

His mom’s words stayed with him. He played sports and got good grades. He stayed out of trouble. He graduated in 2007 from Lyle High School, at the top of his class.

He applied to a single college and was accepted on a full-ride scholarship. Here, too, his family had created a history for him to look to: His mom had taken some community colleges classes, and two aunts had earned college degrees a few decades before.

Nelson arrived on the Central Washington University campus in the fall of 2007 with no clear outcome in mind, but he was curious and positive. Mostly, he knew that there was a lot more outside of his previous range of experience and he chose not to limit himself.

Fast-forward 14 years to the spring of 2021, Joey — now Joseph Nelson, M.D — took time from an intense schedule to talk to a group of juniors and seniors at his old high school. Although many things remain the same at the school, technology and the COVID-19 pandemic had produced one big change. Instead of making an overnight trip, Nelson was able to join the group, which was split between home and the classroom, via a remote meeting program from his home in Seattle.

Nelson asked questions and prodded students to think about possibilities. He encouraged those with an interest in college to apply, emphasizing the availability of financial aid.

He addressed a frequent concern, the inevitable culture shock students feel going from a high school with 80 students to a campus housing more than 10,000 students. For many young people who have lived in a community where they’ve known their peers for most of their lives, making friends in a larger, often urban environment can seem overwhelming.

Nelson shared that, when faced with that situation, he did what he knew and loved to do best. He took a basketball to a gymnasium on campus and, before long, found a group to play ball with regularly. “On a campus of that size, there are plenty of groups with varied interests. You’ll find your people,” he assured the students.

Now a second-year Family Medicine resident at the University of Washington in Seattle, Nelson shared the journey of self-discovery that brought him to a position as medical doctor at a nationally-respected hospital system that treats critically ill and injured patients from throughout the Northwest.

Sometimes, you don’t know your own strengths

It’s not surprising that Nelson didn’t take the usual path on his way to his chosen career. Nelson wasn’t one of those kids who always knew he wanted to be a doctor. He had no plans to major in a science field at all, for that matter. During his first year in college, he did what a lot of students do. He acclimated. He took prerequisites, the foundational classes he needed for whatever major and career path he pursued. He looked at options.

But it wasn’t until he walked through a career fair at the college that he realized he might be interested in a career in science and decided to take a biology class. He found he had an affinity for it. Unlike so many people in medical careers, he didn’t have the advantage of a rigorous high school science program with plenty of funding. As a result, he says he was simultaneously “terrified of science, but excited for the challenge.”

With an open and engaging personality, he quickly found mentors who helped him build his network. He was named a Udall Scholar for his interest in tribal public policy and healthcare. After spending a summer in Boston participating in a research program through Harvard Medical School and Brigham and Women’s Hospital, his interest in medicine grew stronger. Upon graduation from college, he worked in an emergency department in Yakima as a medical scribe for two years. He then applied to and was accepted at the University of Washington School of Medicine, where he earned his medical doctorate before starting residency.

Along the way, there were inevitable obstacles: Financial hurdles, cultural differences, and stereotypes, including oft-made racially charged statements: “You only got here because you’re an Indian,” or “Must be nice to have free college tuition.” The latter, Nelson explained, is based on a widely believed falsehood that Native Americans and Alaska Natives go to college for free. In fact, very few NA/AI people make it to college, largely due to systemic barriers, lack of mentorship, and institutional racism, he said.

These days, Nelson’s typical day is not for the faint of heart: Waking up early and having a quick cup of coffee before spending his next 12-14 hours seeing a diverse patient panel in his clinic at Harborview, managing those who are critically ill in the hospital, or learning from doctors who are experts in their field.

All this when he’s not covering overnight shifts, delivering babies, or providing care to Alaska Natives in Juneau and the island village of Kake. He is an advocate for diversity, equity and inclusion at UW and is a mentor for others as they embark on their own journeys into medicine. His successes have awarded him with recognition through scholarship, publication, and leadership positions.

He continues to play basketball and is engaged to Dr. Claire Simon, another resident in his program. Their plans include devoting the early years of their careers to working in disadvantaged rural communities, after they’ve completed their training.

And, always, staying open to the possibilities, because there’s no telling where they will lead.

COVID-19 spike should end by Christmas