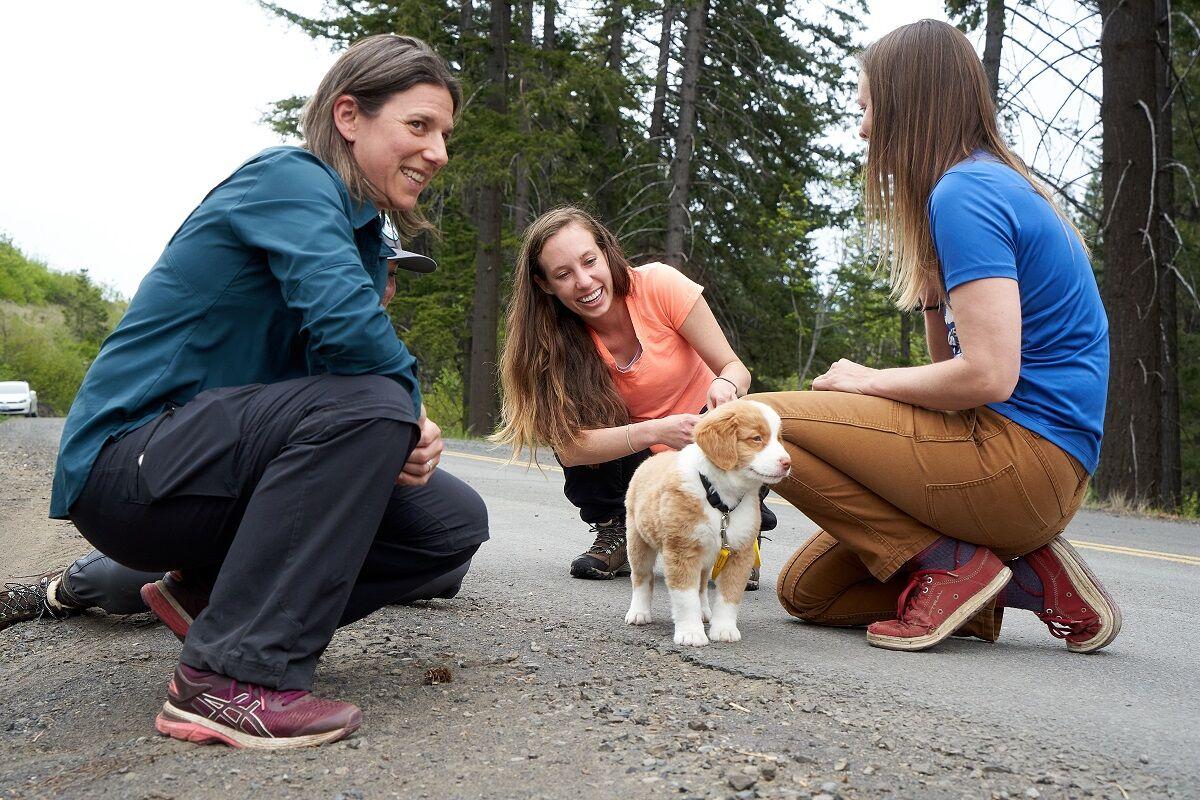 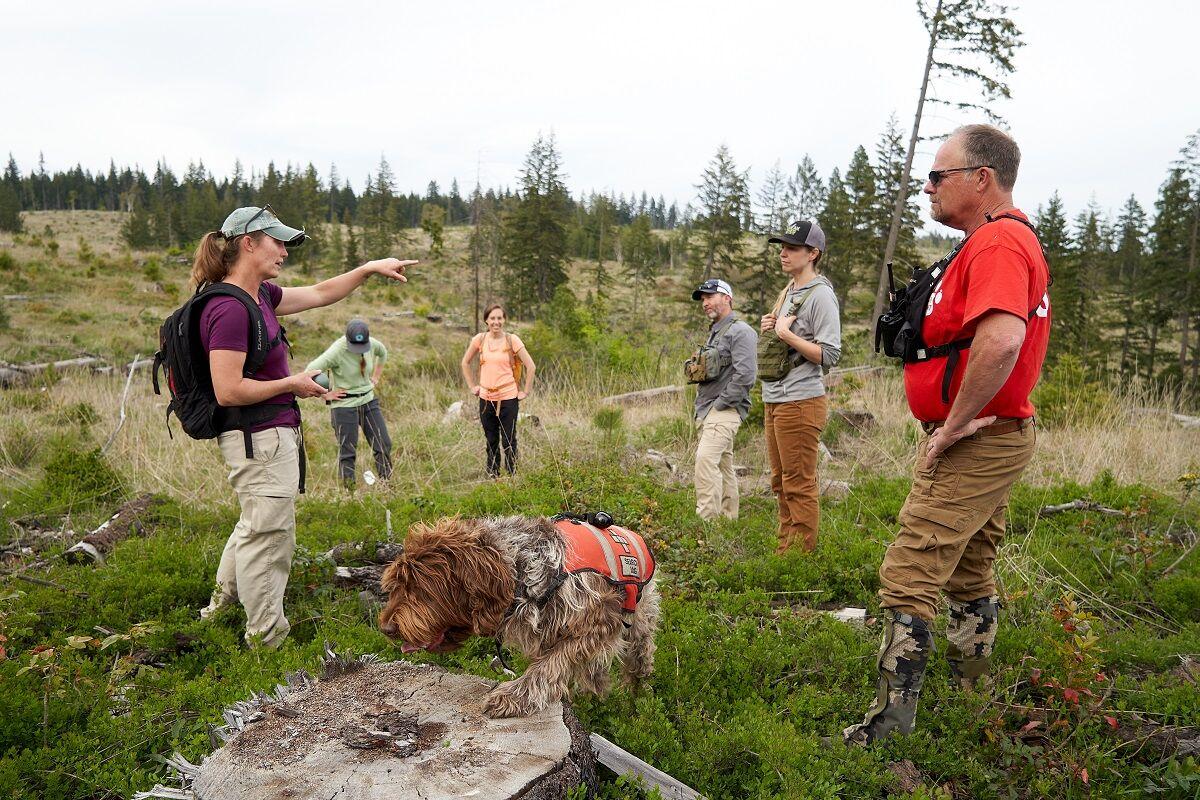 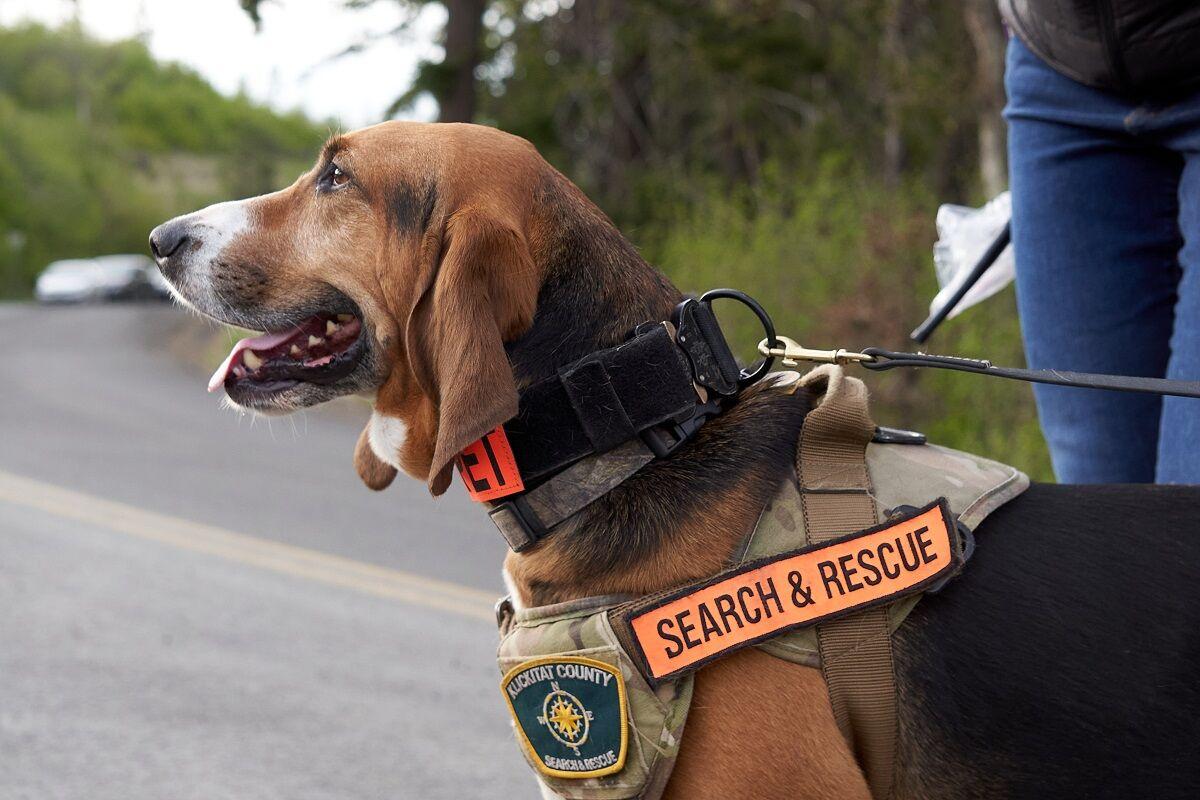 Klickitat County Search and Rescue K-9 Ellie is held by handler Jim Jones during a training above Lyle, Wash., on May 5. 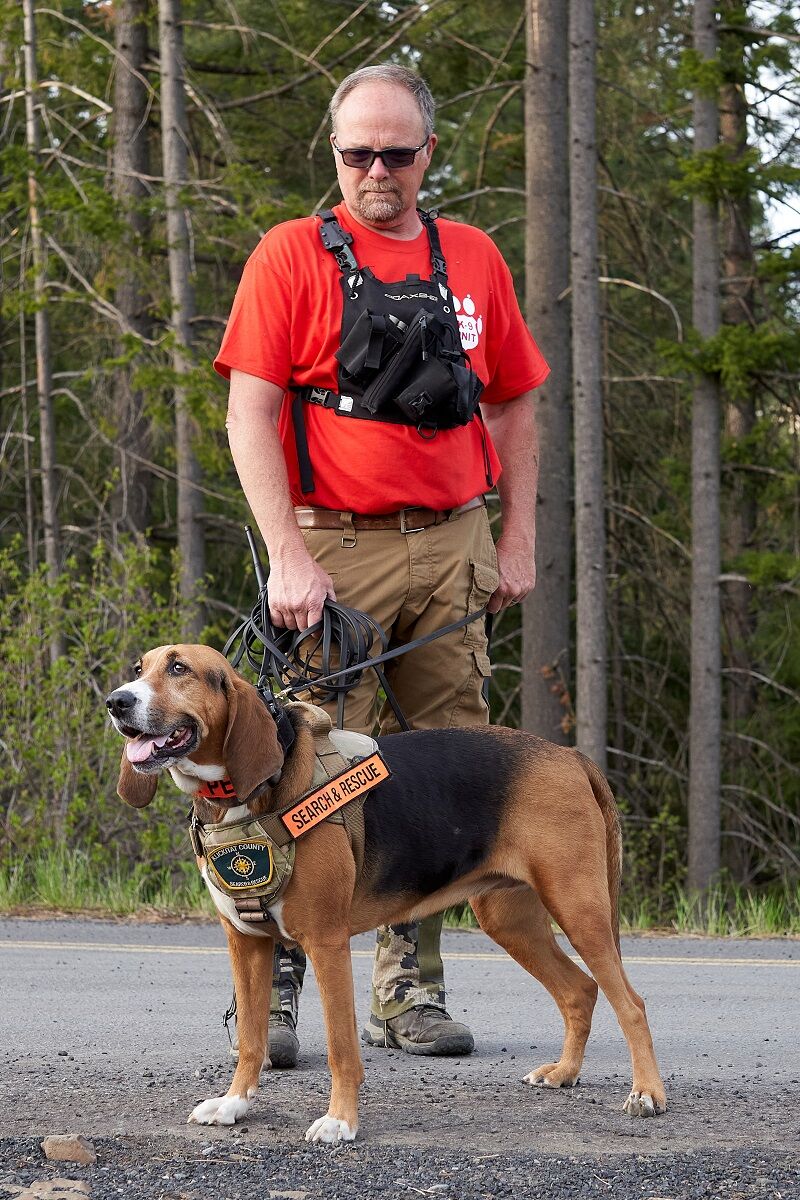 A year ago, Maija DiSalvo and Jim Jones took turns hiding from each other.

Jones said the dogs got familiar with their handlers’ scents to the point where it became difficult to challenge them and make progress in training. The pair posted on Facebook hoping to recruit a few people to come out and “get lost” during K-9 trainings.

They got 75 email responses, Jones said. Ellie and Griffin are now certified. Four other dogs and handlers are in training and a group of volunteers to support the handlers have filled out the K-9 Team’s roster.

The dogs have been called out four times in the last six months since their certification, KCSAR Vice President Jeff Adams said. He said this represents a significant portion of the incidents the organization responds to overall.

Adams said the K-9 Team may help build mutual aid relationships with other counties and will likely get even more use as the sheriff’s office, which oversees KCSAR, gets familiar with the resource and how to utilize it.

Trailing dogs like Ellie and Griffin seek out the scent of a specific subject, “You basically just give them the article and let them work,” Jones said.

Area search dogs look for any humans nearby which is useful in backcountry searches, he said.

Molly Sullivan and K-9 West joined the team about a month ago. West, a German wirehaired griffon, is an area search dog who was previously certified by the California Rescue Dog Association.

Sullivan’s expertise will help the team's newest member — 8-week-old Jovi (short for jovial), a Nova Scotia toller which handler Julia Sauder purchased to train as an area searcher for the team.

At work, West cuts a swath around Sullivan until finding a subject who he then greets before running back to the handler and jumping on her as an “alert.” Sullivan said field hunting dogs like West and Jovi do well with non-specific area searching.

“Instead of flushing a bird you find a human, and instead of retrieving you come jump on me,” Sullivan said.

Chelsey Betterley joined the team to support handlers. Jones said handlers rely on “flankers” to handle navigation and communication as handlers are focused on their dogs.

Betterley started bringing her dog Khuno when she realized trainings amounted to dogs finding people in exchange “for hot dogs and scratches.”

“He is extremely food motivated and will pretty much do anything for a hot dog,” Betterley said.

At a training above Lyle May 5, Betterley and Sauder took turns hiding for K-9 West. Dana Reid, whose Swedish Vallhund Aster’s mother was the breed’s first certified human remains dog, hid for K-9 Griffin and DiSalvo.

The subject of Jones and K-9 Ellie’s mock search was Kathy Harris, who doesn’t have a dog of her own and was one of the first volunteers to join Jones and DiSalvo last year.

Harris said she volunteered to get her “dog fix.”

“How can you not love it,” Harris said as she rewarded Ellie with a can of Vienna sausage. She said she feels watching the dogs train has given her a better idea of what to do if she and husband Steven get lost on a backpacking trip.