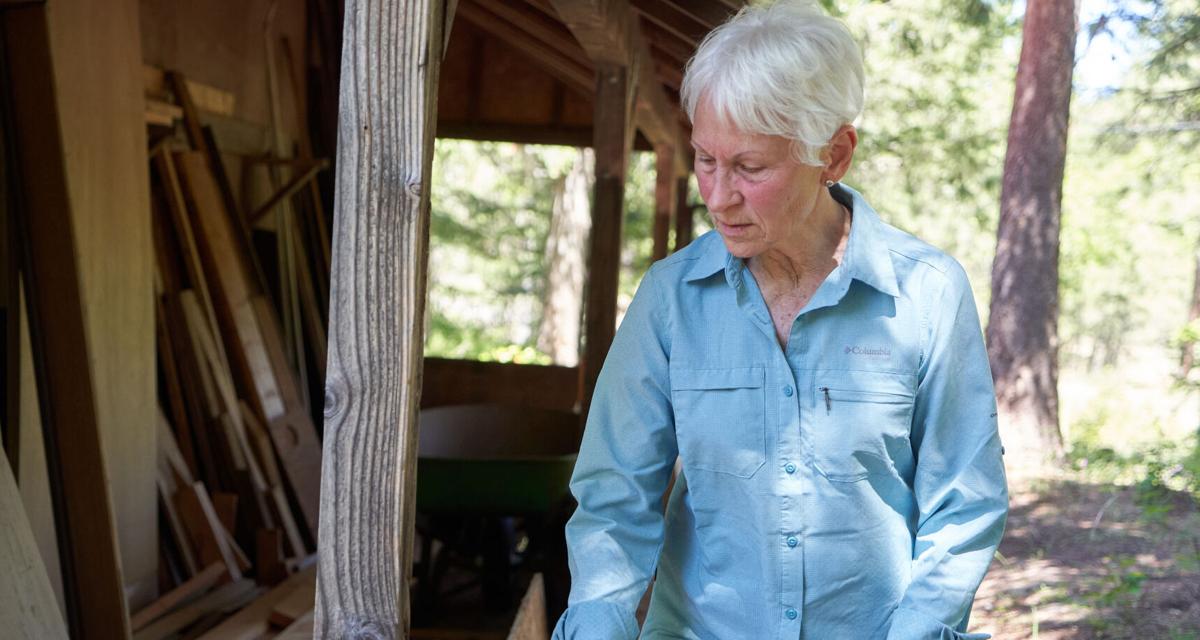 Megan Pingree starts to open the knee-high barriers she installed around her lumber storage area to keep leaf litter from building up at her shop above Mosier on May 11. 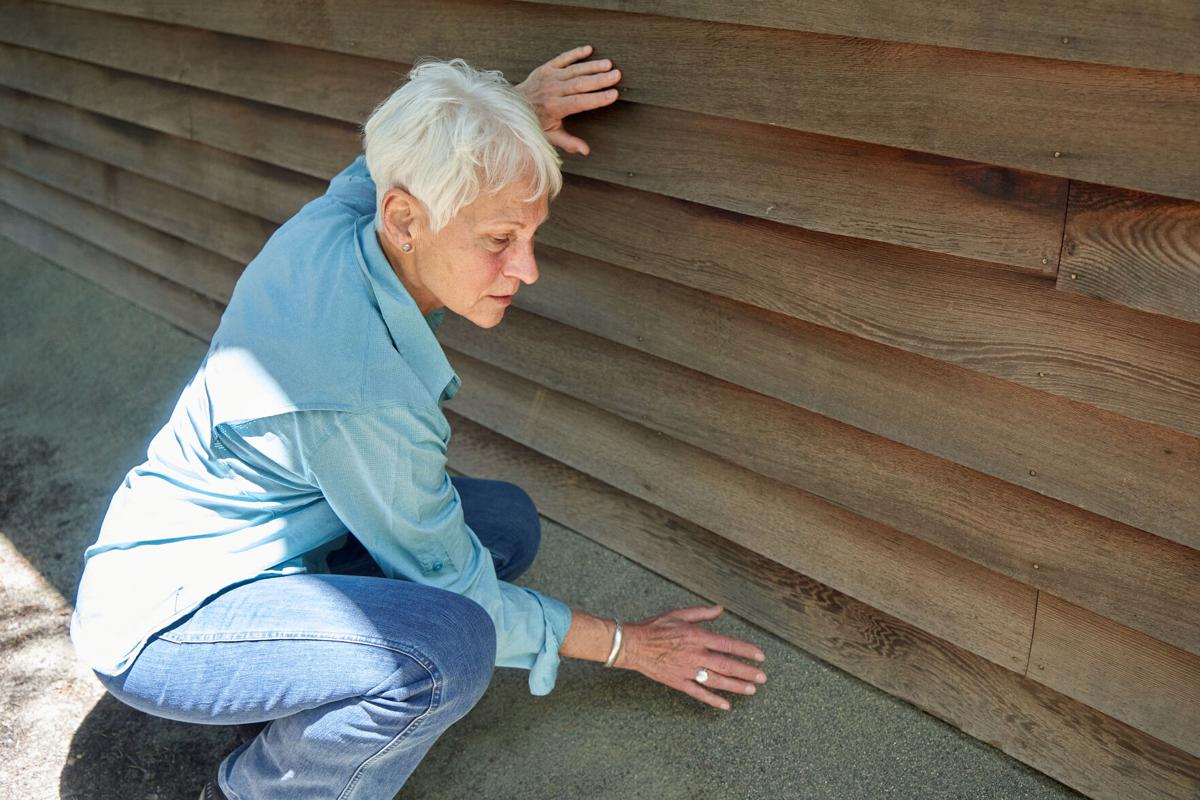 Megan Pingree points out the paver sand she spread to keep debris from building up in the space under her shop’s siding above Mosier. 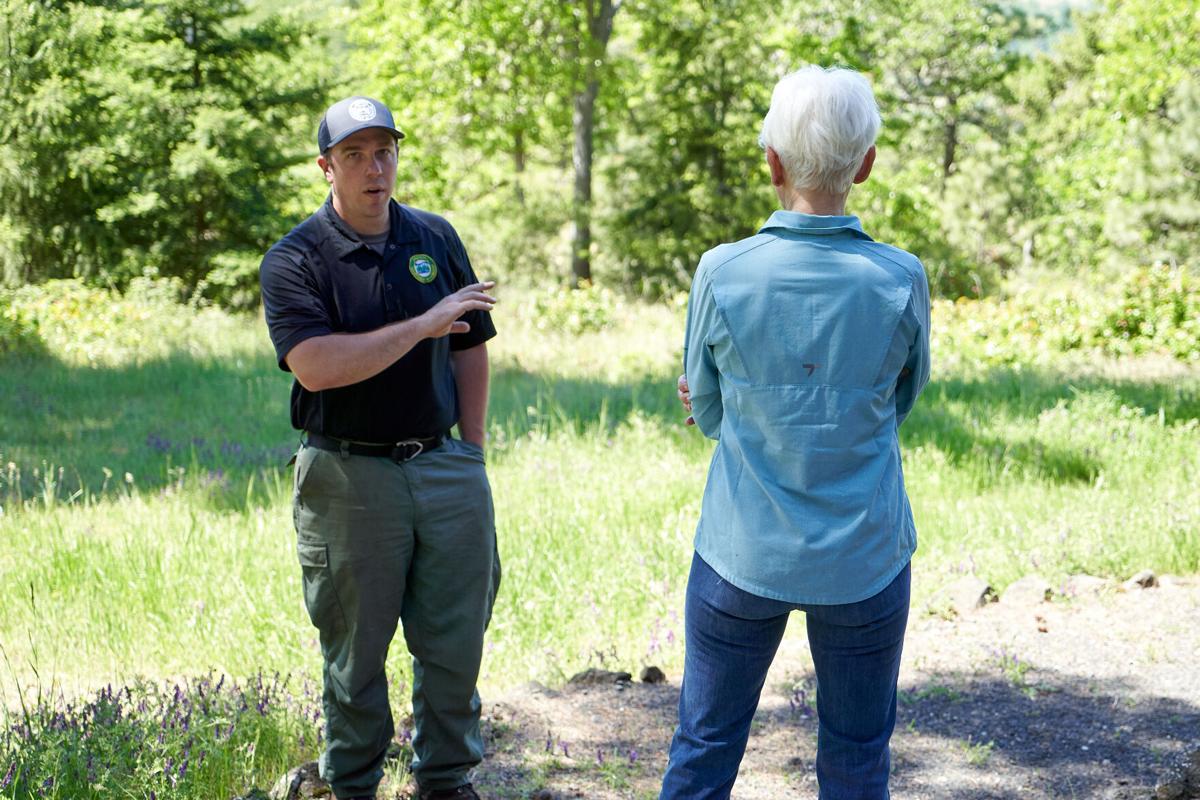 Megan Pingree starts to open the knee-high barriers she installed around her lumber storage area to keep leaf litter from building up at her shop above Mosier on May 11.Walker Sacon photos 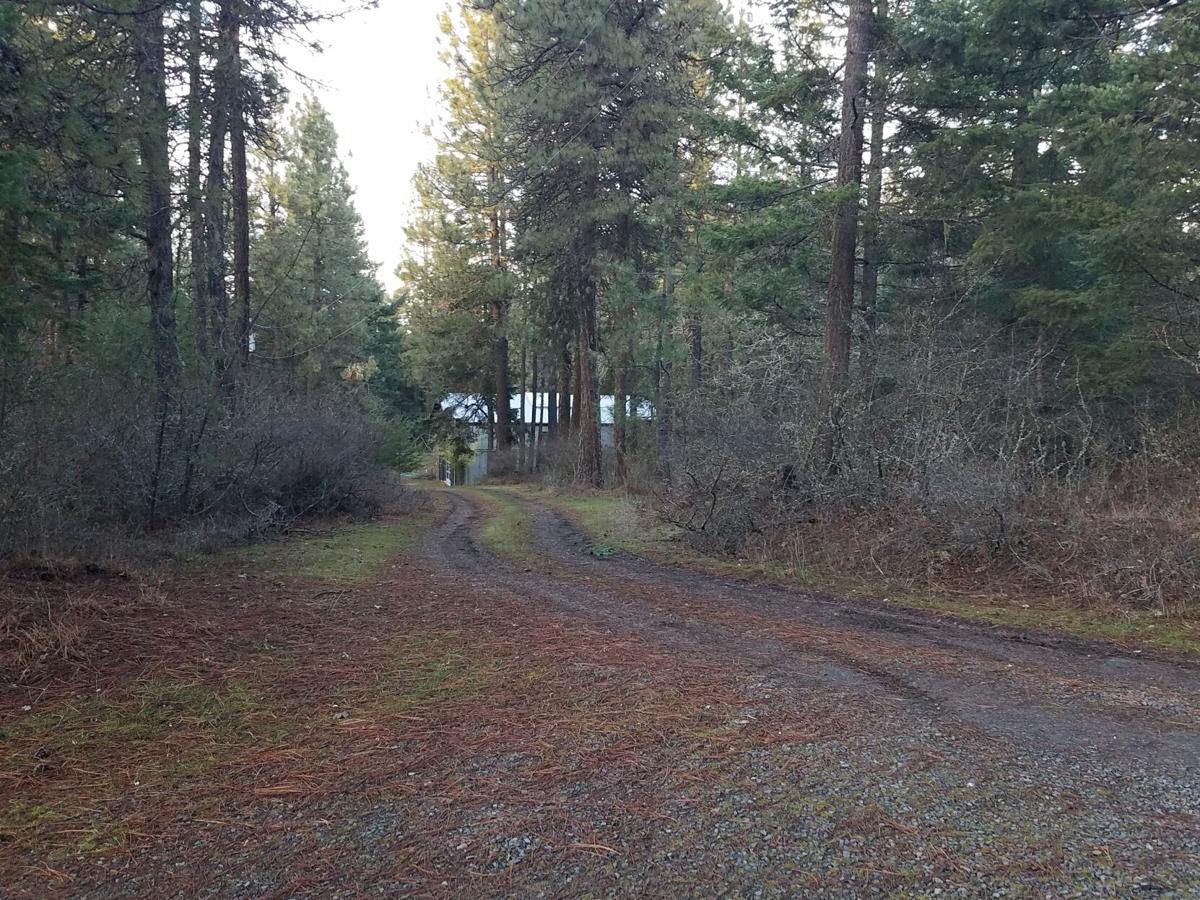 Fuel reduction has not yet occurred on this property, prior to a project to reduced the fuel a wildfire needs to grow and spread through the property. 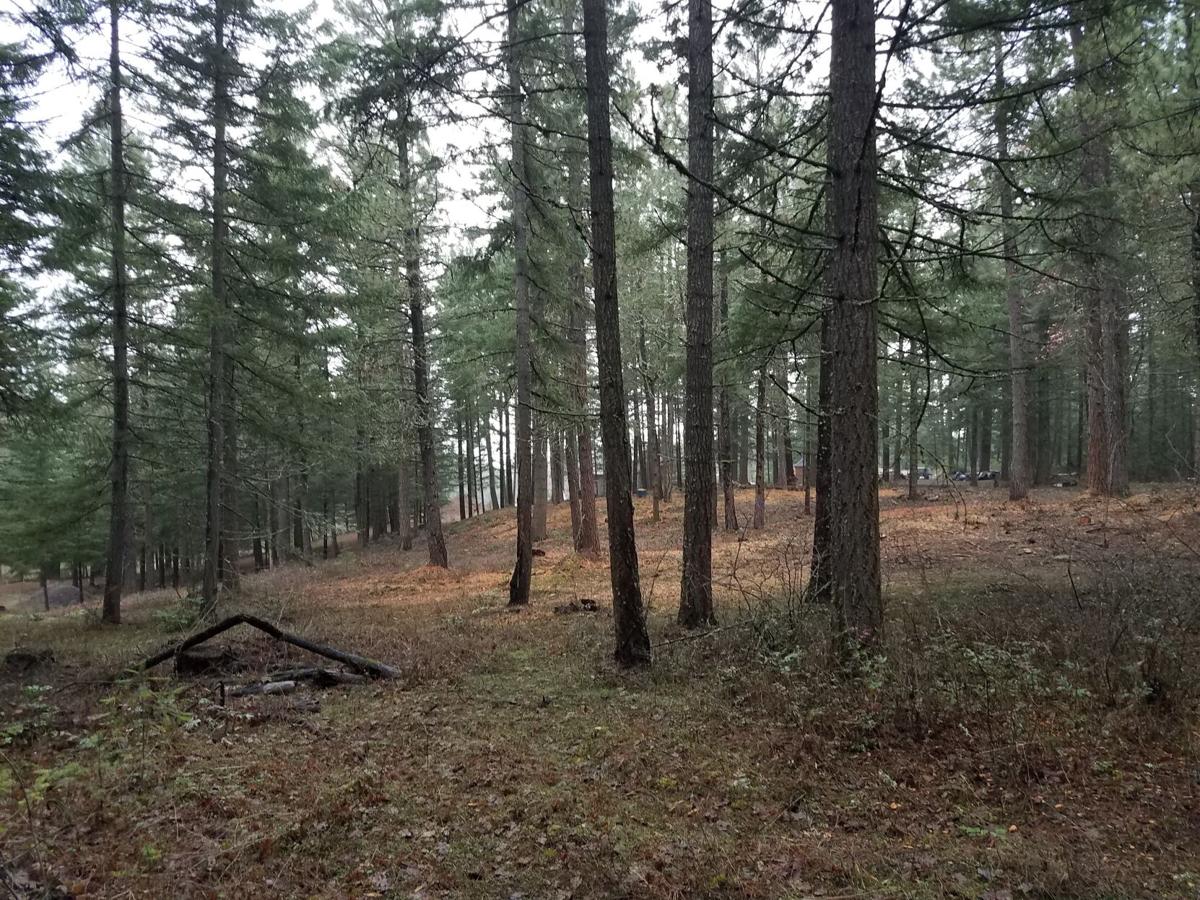 The end result of a fuel reduction project in the Paradise Ridge area above Mosier, above, contrasts sharply with the same property pictured prior to the project. The project reduced the fuel a wildfire needs to grow and spread through the property.

Megan Pingree starts to open the knee-high barriers she installed around her lumber storage area to keep leaf litter from building up at her shop above Mosier on May 11.

Megan Pingree points out the paver sand she spread to keep debris from building up in the space under her shop’s siding above Mosier.

Megan Pingree starts to open the knee-high barriers she installed around her lumber storage area to keep leaf litter from building up at her shop above Mosier on May 11.Walker Sacon photos

Fuel reduction has not yet occurred on this property, prior to a project to reduced the fuel a wildfire needs to grow and spread through the property.

The end result of a fuel reduction project in the Paradise Ridge area above Mosier, above, contrasts sharply with the same property pictured prior to the project. The project reduced the fuel a wildfire needs to grow and spread through the property.

Crews from the Oregon Department of Forestry and Mosier Fire District were already working fires on Aug. 12, 2020, when the Mosier Creek Fire started.

Mosier Chief Mike Renault said fuels, wind and terrain “truly aligned” that day. ODF The Dalles Fire Protection Supervisor Rick Fletcher ordered the largest incident management team he could as soon as he hit the road for the new start and saw its smoke column.

Within two hours, Oregon’s Conflagration Act was invoked to bring more help from outside the area as all of Renault’s responders and those from mutual aid agreements were tied up triaging around 500 structures threatened by the fire.

From her deck on Paradise Ridge, Megan Pingree had a front row seat.

Pingree now chairs a community board which, with Fletcher and Renault’s help, has gotten Paradise Ridge certified as a Firewise Community by the National Fire Protection Association. The neighborhood is the first community in Hood River or Wasco counties to receive the certification, Fletcher said.

Fletcher said it was a “huge success” to be able to showcase the community for National Wildfire Awareness Month this May.

Firewise is a national defensible space program with general guidelines which allow different communities to do what makes sense in their environment, Fletcher said. He said a becoming a Firewise Community represents a commitment to proactively organize to reduce wildfire risk.

Fletcher said the Firewise Community on Paradise Ridge may be the most fire-prone community in Oregon to receive the certification. Nearby Rowena Dell has been evacuated multiple times in one season, he said.

Pingree said she didn’t pay much attention to the fuel load around her house when she first moved in. After 2016’s oil train derailment fire in Mosier, she started what has been an ongoing project to make her home more defensible.

The idea to pursue a Firewise certification spread in the neighborhood by word-of-mouth, Pingree said, after Renault brought up the idea during a site-visit he conducted to issue her a burn permit.

Renault tries to visit landowners, carrying Firewise brochures, each time he issues a burn permit. He said defensible space and wildfire risk often come up in conversation on those visits. Fletcher said fire responders offering landowners perspective on potential danger is impactful as landowners have “a mixed bag of understandings” on what it means to be prepared.

“We’ll drop other things off our plate if it means having an impactful conversation with a landowner,” Fletcher said.

Fletcher and Renault said homeowners should start from the home and work out through what the Firewise website calls “the Home Ignition Zone.”

The site breaks this down further into the “immediate zone” which includes the home and everything within five feet of the exterior, the “intermediate zone” from five feet to 30-feet out and the “extended zone” from 30-100 feet and out to 200-feet.

“Folks do a really good job from 10-feet out from their house out to about 30 feet,” Fletcher said. “We forget about the stuff that we’re storing up against structures.”

Renault said he encourages landowners to “look at the lowest handing fruit” and “start with stuff you can make progress on,” like replacing bark dust or woodchips around buildings with river rock, gravel or other nonflammable material.

He said he has seen people lose momentum on grand plans of treating their entire property after realizing how much work fuel reduction can be.

Preparing driveways — the Firewise brochure recommends clearing a 12-foot wide and 15-foot high swath — ensures firefighters will be able to get in and out safely in case of emergency, Renault said. He said access plays a role in determining what responders can do safely when triaging and defending structures.

“If we’re going in for triage, that means people are going out,” he said.

Fletcher said it helps to have address numbers clearly posted at the end of the driveway.

Homeowners don’t have to abandon their pragmatic or aesthetic goals to improve their home’s defensibility, Fletcher said. He pointed to some brush still standing on Pingree’s well-groomed property as an example of a “nice privacy screen between two really fire-adapted homes.”

Fletcher said direct contact from flames or radiant heat isn’t what usually ignites structures. He said things like bark dust and leaf or coniferous needle debris which could be ignited by “ember wash” from nearby burning trees and brush should be the focus and should be totally absent from gutters, eaves, under decks and the 10-foot space surrounding buildings.

The goal with brush removal and the spacing and pruning of trees in the intermediate and extended zones is to have fuel loading and fire intensity decrease as fire moves towards a building, Fletcher said.

Pingree has replaced her bark dust with river rock. The space below her shop’s siding which used to fill with windblown debris is now covered with paver sand. She installed knee-high gates around the space where she stores lumber, saving her the strain of bending over to sweep and pull leaf litter from around boards.

Pingree said “self-preservation” motivated her to organize with others. “I’m only as safe as my neighbors are,” she said, but she also felt a sense of “community spirit” in the effort.

The National Scenic Area’s former Fire Management Officer Darren Kennedy is also on the Paradise Ridge Board. Renault said everything involving fire in the Gorge “all goes back to partnership.”

Pingree said Fletcher and Renault’s involvement helped localize information from the Firewise program, which is general by design. Fletcher said though the program is national, it is administered by local and state fire protection agencies who help Firewise Communities complete community assessments and action plans.

Information about wildfire preparedness for homeowners and more information on the program can be found at www.firewise.org. Homeowners in Wasco or Hood River counties can contact ODF The Dalles at 541-296-4626 and Klickitat County homeowners can reach the Washington Department of Natural Resources’ Southeast Region office at 509-925-8510.

A grass fire that burned Sunday afternoon on a property on Cherry Heights Road in The Dalles has been contained, officials said.

The fire burned around an acre and a half after an open burn pile of debris got away, said Mid-Columbia Fire and Rescue Chief Bob Palmer.

It’s the third grass fire the agency has responded to over the past two weeks, Palmer said.