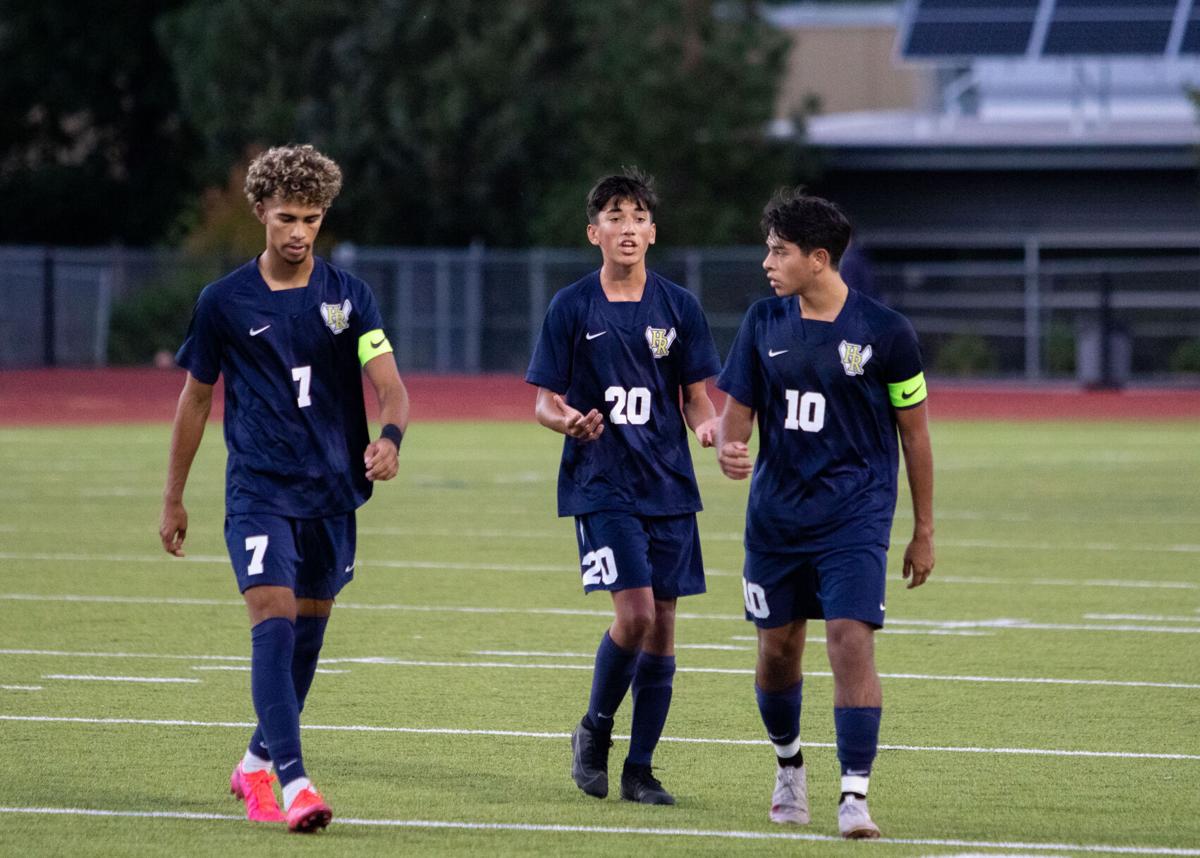 Jaden Dubon, Jordan McDoal and Cody Cornejo head to the bench at halftime down 0-1 on Sept. 14. Hillsboro’s goal was the first score the Eagles had given up all season. 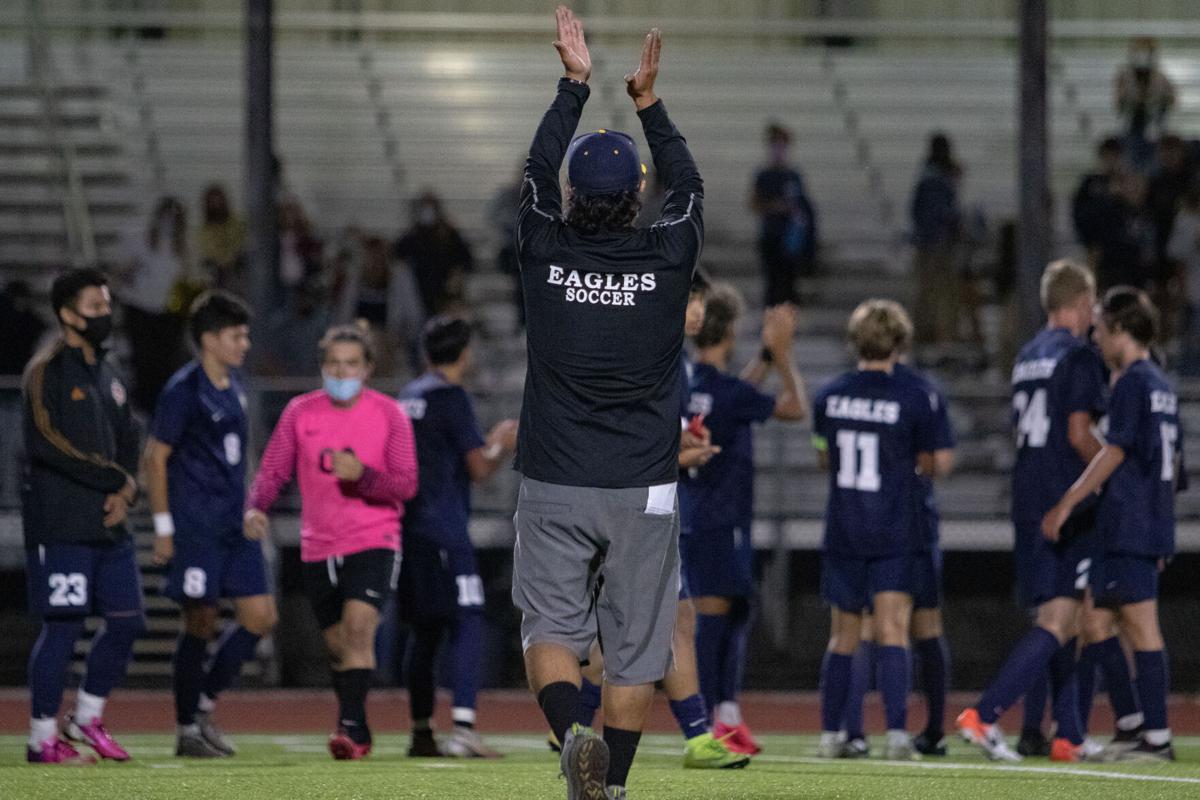 Jaden Dubon, Jordan McDoal and Cody Cornejo head to the bench at halftime down 0-1 on Sept. 14. Hillsboro’s goal was the first score the Eagles had given up all season.

The Hood River Valley boys soccer team renewed its rivalry with the Hillsboro Spartans on Sept. 14, when the No. 8 Spartans traveled to HRV for matchup of elite soccer programs. Since 2014, the Eagles have won two 5A state championships and advanced to the quarterfinals in all but one year. The Spartans have also qualified for the playoffs every year, with two trips to the semifinals.

Every year, Eagle Coach Jaime Rivera wants the Spartans on his preseason schedule.

“We have a long history with Hillsboro,” Rivera said. “We’re always going to get their best shot.”

Although this year has not been friendly to Hillsboro. Losing its first two contests to South Albany and Glencoe, it had hoped to get back on track with a win against Hood River. Instead, the teams had to settle for a 1-1 draw.

Early in the first half, both teams had played each other evenly. The Spartan defense held its own against the Eagles’ speedy forwards, and Hood River played to its strengths and swung the ball out to its wingers. Senior forward Jaden Dubon created a chance on goal early but couldn’t sneak a chip shot past the Spartan goalkeeper. According to Rivera, Dubon will leave the Eagles for an extended period in October to train with the Belize National Team.

A mistake from Eagle goalkeeper Hugh Dalbey opened the door for a Hillsboro free kick in front of the HRV goal. In an attempt to clear the ball with his chest, Dalbey was called for handling the ball outside of the goalie box. The referee stopped play and issued him a yellow card. Per OSAA rules, players must come off for at least a play after a yellow. As Dalbey trotted off, backup keeper Izaiah Adams came on to try and stop the free kick. Hillsboro’s free kick specialist, Gerardo Contreras, smashed a shot passed Adams and into the net for the first goal of the game.

It was the first goal allowed all season for Hood River. The first 40 minutes ended, and Hood River had yet to recover, both mentally and on the scoreboard. The Eagles walked to their bench and began to formulate a plan, which included instruction from Hood River captain Cody Cornejo for his team to stop complaining and stay positive.

“We can’t let the opponent see our frustrations,” Cornejo said.

Milo Clarkson also gave some inspiring words to his team in the huddle.

Hood River looked like a different team to start the second half. Attackers were getting forward, wingers were getting crosses in, and defenders were communicating. Senior defenders Robert Rowan and Hunter Hough were pillars of the Eagles’ back-line defense. Both stand more than 6-feet tall and form a nearly impenetrable defensive line. The duo played the entire game.

As for Hillsboro, its defensive line is also athletic, making it difficult for Dubon and Clarkson to get opportunities on goal. Passing long ball after long ball, the Eagle strategy was not working. Cornejo and Rivera pleaded with the team to stay calm and keep possession of the ball.

The Eagles spent most of the second half in Hillsboro territory but failed to equalize on any opportunties. Despite his yellow card in the first half, Dalbey impressed with his ability to keep shots away from goal. His diving saves gave the Eagles reason to keep playing. Offensively, near misses and too much one-on-one dribbling forced the Eagles into scramble mode with just ten minutes left in regulation.

Rivera made strategic substitutions to find a spark. The breakthrough moment came with three minutes left when Clarkson swung a free kick into the box and connected with attacking counterpart, Dubon. His glancing header was out of reach of the goalkeeper and tied the game, 1-1.

“(Hillsboro) is a solid program, and we did not play our best game tonight,” Rivera said. “They wanted it more than us.”

Reviewing fundamentals is on the practice schedule for Hood River this week. Keeping passes short, communicating off the ball and making the simple play are all things Rivera wants to see his team improve. Hood River was scheduled to face another top-5 opponent in La Salle Prep on Sept. 21. The Falcons were unbeaten after four matches and ranked third in the OSAA’s Class 5A ranking as of Sunday. HRV plays Class 6A David Douglas at 7 p.m. Thursday in Portland.