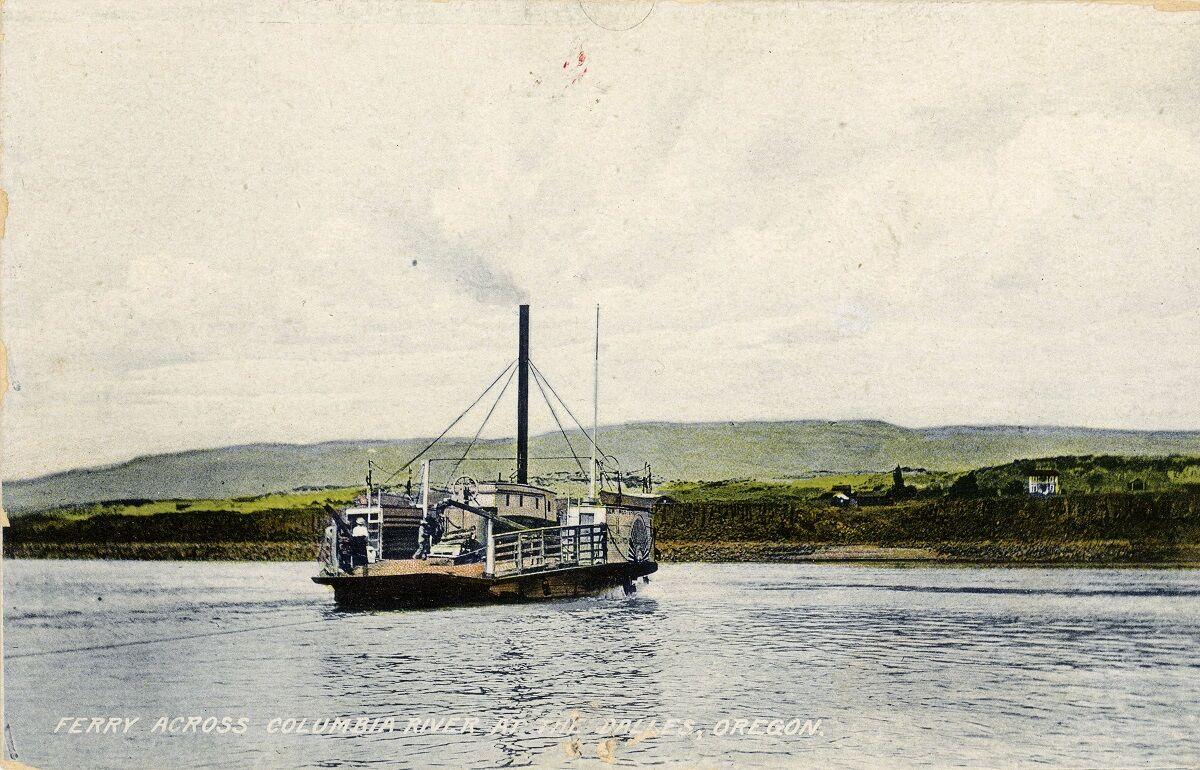 An undated, hand-colored postcard features The Dalles ferry across the Columbia River. The crossing was at Union Street, downtown The Dalles, crossing to Dallesport. 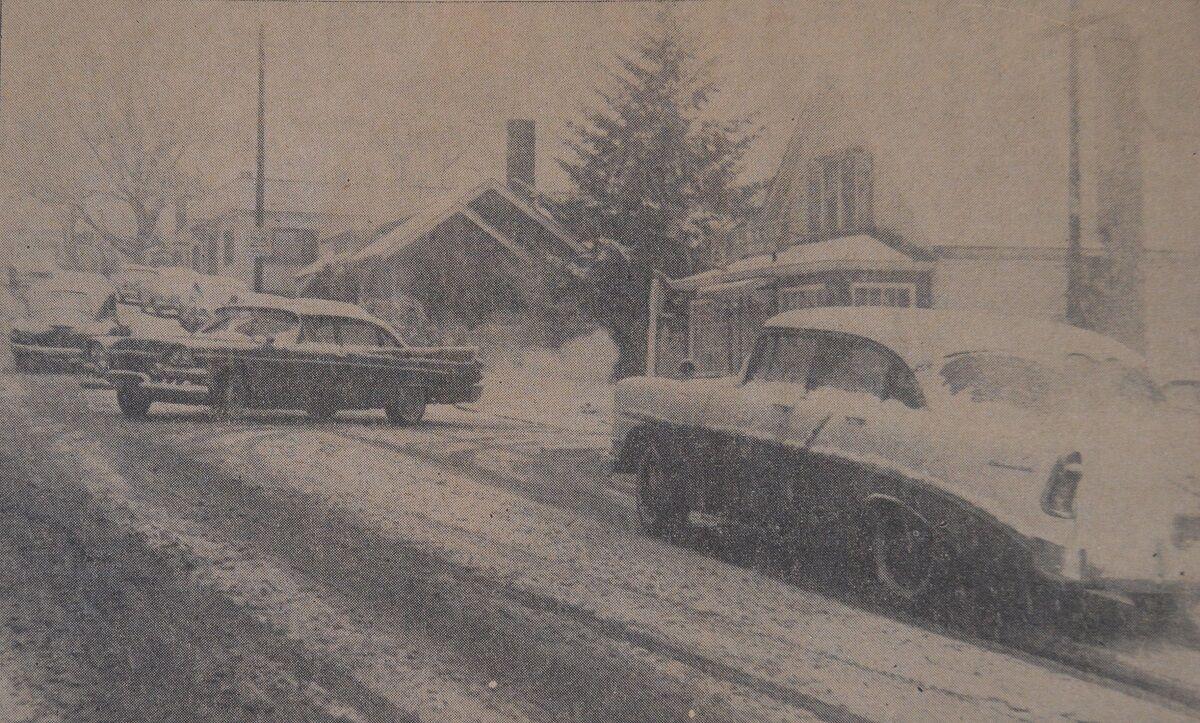 Snow blanketed Hood River Tuesday, causing some difficulty to downtown traffic, as photo above indicates. Better weather is expected for the coming weekend. 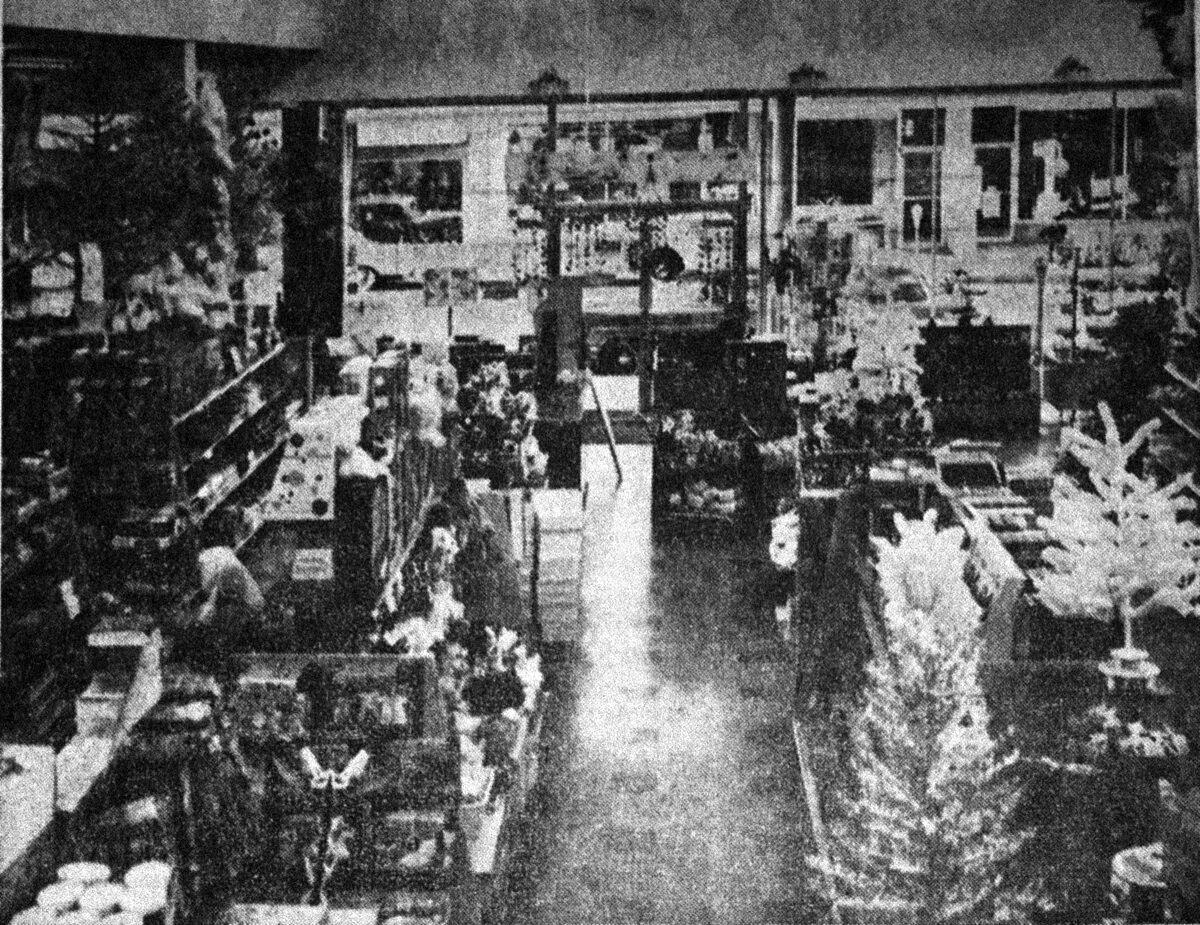 During the latter part of last week, four more or less serious accidents were reported on the Columbia River Highway. Many car owners state that speed is not the only factor in accidents and they complain that, even when traveling at slow speeds, it is difficult to keep a car under control and eliminate the tendency to skid on the slick wet pavement. They report that the sand thrown on the paving does little or no good because it is washed away by the rain. — Hood River News

Repudiation of the activities and principles of the non-partisan league; endorsement of President Harding’s attempt to secure armament limitation; and condemnation of the plan to tax the state for the purpose of raising money for the 1925 world’s fair, were the major results attained at a meeting of the Wasco County Farmers’ union held yesterday afternoon at the Universal local hall, on the Wapinitia plains. Farmers from all parts of the county were in attendance at this meeting. — The Dalles Daily Chronicle

Early next month, the new Civilian Public Service Camp, located at the CCC camp at Wyeth, will be in operation and will, at the outset, have six conscientious objectors to military service of Oregon stationed there to work out the year of service. Hitherto, conscientious objectors of Oregon have been sent to the camp at Glendora, Calif., according to Lieutenant-Colonel Elmer V. Wooton, state selective service officer. The six men are from Malheur, Marion, Clackamas and Lane counties, and one from Lost Angeles, who is living in Portland. It is expected the men will be engaged in forest trail and other similar work. — Hood River News

A total of 26 Chinook, 22 steelhead, three silversides and 293 chums passed over Bonneville dam on Thursday, Nov. 13, according to figures released today by the United States army engineers. — The Dalles Daily Chronicle

The Christmas season comes one step closer this week with the hanging of street decorations, reports Merchants Committee Chairman Stan Draper. According to Draper, merchants assembled last Thursday night in the basement of the old Apple City garage to lay out the cedar garlands, fasten light strings and put new lifelong lite bulbs (sic) in all ornaments. On Sunday morning, they organized a crew to hang them downtown and on the Heights. He pointed out all labor is volunteer and the merchants each year provide funds for the maintenance of the decorations. — Hood River News

Directors of School District 12 reacted favorably to a proposal that a second high school building be erected at a new site here. District 12 board several weeks ago notified the Chenowith, Petersburg and Rowena districts that the present Dalles High School is not large enough to accommodate the anticipated enrollment beyond 1962-63. Tuition students from these districts will not be accepted beyond that year.. — The Dalles Daily Chronicle

Hood River’s Waucoma Park will be a little more in the Christmas spirit this year. City council members agreed last week to a first annual Christmas tree ceremony in the park at 13th and Oak. The Chamber of Commerce Merchants Committee proposed that a cut tree be placed at the park and be decorated at a ceremony Sunday afternoon, Nov. 29. The tree ceremony is just part of a full day of activities planned for the first annual Community Christmas celebration. — Hood River News

Representatives of the Muddy Ranch fielded questions for 80 minutes Monday as they met with 140 people who attended The Dalles Area Chamber of Commerce Forum at noon. “It doesn’t matter what you ask, it is important that there is communication between us,” said Sheela Silverman, president of the Chidvalis Information Center. The primary purpose in buying the ranch, she said, was to reclaim it, to build something from nature as a shrine to the Bhagwan Shree Rajneesh, Indian spiritual man whose philosophy binds the group together. — The Dalles Daily Chronicle

Klickitat County commissioners unanimously approved a Gorge Protection Overlay this week. Commissioner Ted Hornibrook said he thought passage of the ordinance would make a good case in support of local control. Commissioner Fred Holly, who is also a member of the Washington Governor’s select committee on the Gorge, said he supported the concept but had some mixed feelings on the timing of the decision. He was not able to get endorsement of the ordinance from the group. — White Salmon Enterprise

While riding his bike around on a lazy weekend, 8-year-old Trevor Trevis was transformed into a mural artist for his school. Trevor happened upon artist Ian Brownlee, and AmeriCorps volunteer, painting a mural for Colonel Wright Elementary. “I saw him and came to watch. He asked if I would like to help and I said sure,” said Trevor. The large mural, entitled “September Rain,” is painted on the back of a building by the school’s courtyard. — The Dalles Chronicle

Sharon Harmsen is sending her own kind of relief to victim’s of last month’s terrorist attacks on the East Coast. The Underwood woman, along with her lady-friends, who call themselves the “Critter Repair Crew,” have been busy getting 205 refurbished stuffed animals ready to send to victims of the World Trade Center attack. “I just wanted to help in some way,” Harmsen said. — White Salmon Enterprise

White Salmon Has Its Own Blackout

White Salmon observed an alternating “blackout” Thursday night of last week, just about two weeks late for the official Pacific Northwest blackout, which it failed to observe. According to the Enterprise, city officials could not be reached to learned why White Salmon was permitted to blackout, which, also according to the Enterprise, was complete to the last detail. This did not quiet the repercussions of non-cooperation with other Mid-Columbia cities during the real blackout tests of three weeks ago.

Friday morning of last week, it appeared, however, that, insofar as White Salmon city officials were concerned, the blackout was involuntary, the cause being failure of the power system as a result of the heavy storm, which swept this section of the Mid-Columbia. Many tree limbs fell and cut circuits at a number of places. — Nov. 21, 1941, Hood River News

School Budget Is Lower This Year

Only about 20 persons were present at the annual school budget meeting of School District No. 3, held in the high school auditorium on Monday evening to discuss the budget for next year, which has been prepared by the budget committee and published as required by law.

Discussion brought out the fact that the county high school tuition fund is not sufficient to pay the district for the tuition of non-resident pupils in the high school last year and that this deficit will have to be carried by the local school district until such time as an adequate levy could be made by the county court and funds obtained. This will make necessary a slight increase in the total to be levied by School District No. 3. However, it will comfort a number of taxpayers in this district to know that the total levy this year will be nearly $12,000 less than last year. — Nov. 18, 1921, Hood River News

Pursuant to an oder recently released by Ormond R. Bean, commissioner of public utilities of Oregon, safety conditions at The Dalles tank farm crossing, west of the city limits of Dalles City, will be the subject of discussion here tomorrow afternoon when a public hearing on the matter is to be held in the Wasco county courthouse.

The hearing will begin promptly at 2 o’clock with all interested parties — including the county court, commissioners of the Port of The Dalles, and the Union Pacific railroad — expected to be represented.

Difference in elevation of two sets of tracks at the tank farm crossing is “alleged to present undue and unusual hazards to the safety of the driving public,” Commissioner Bean recently stated in a letter addressed to County Judge J.B. Kirk. “Informal negotiations have failed to produce a satisfactory solution of the problems created by this crossing,” Bean added, “and in view of the resultant complaints regarding the grave hazard which has been created, the commissioner has found that public safety, public convenience and general welfare require an investigation to determine what shall be done.” — Nov. 16, 1941, The Dalles Daily Chronicle

Mexican Situation Is At Deadlock