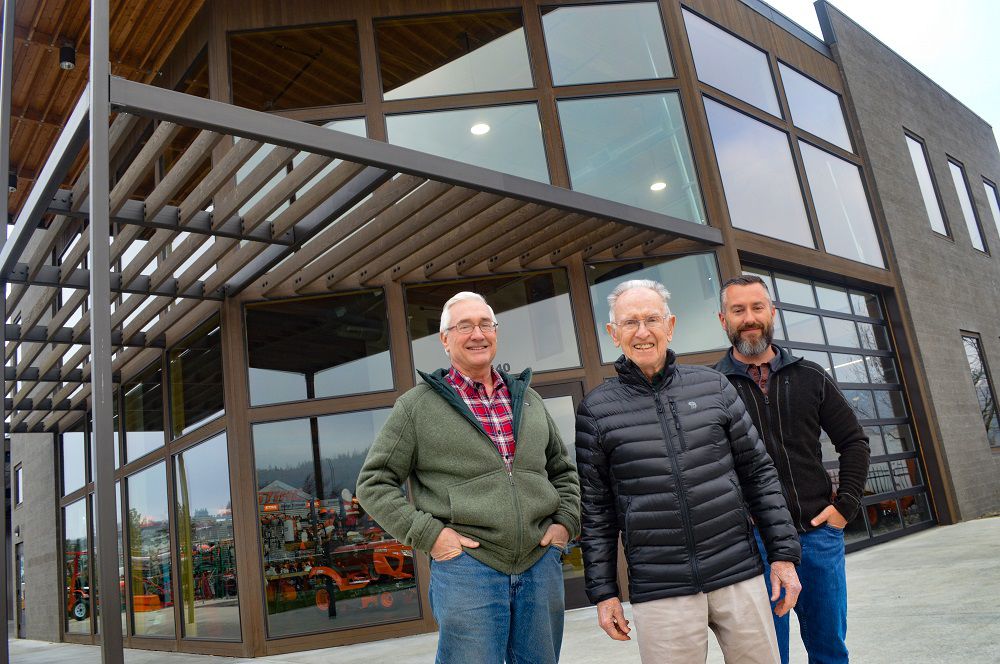 Sheppard trio in front of the new store, built in 2017 near the Hood River waterfront: From left, Craig, Bill and Ben. 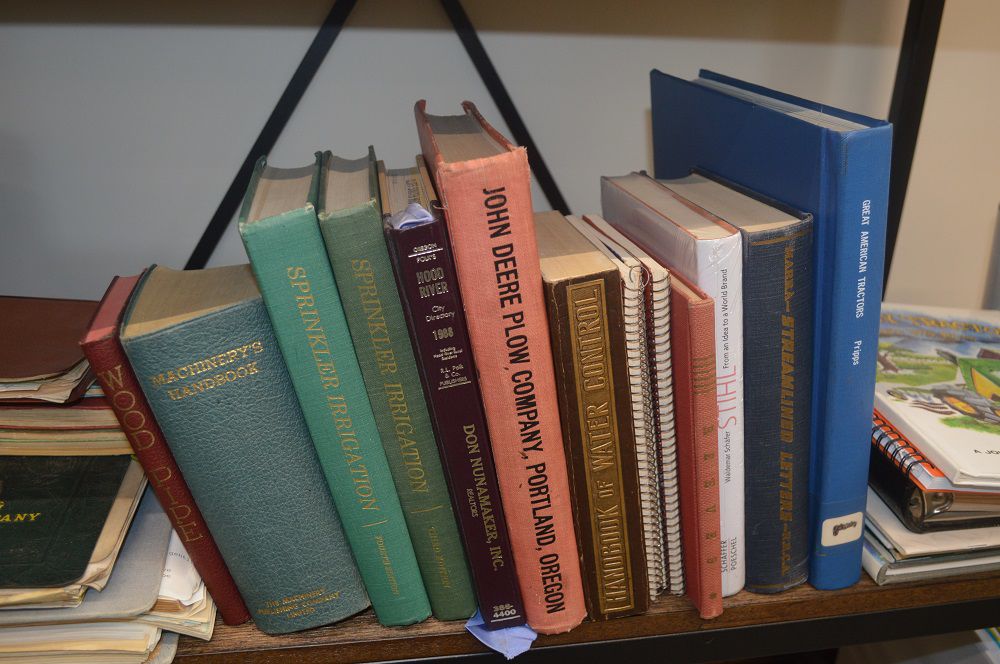 Archives include books and manuals. 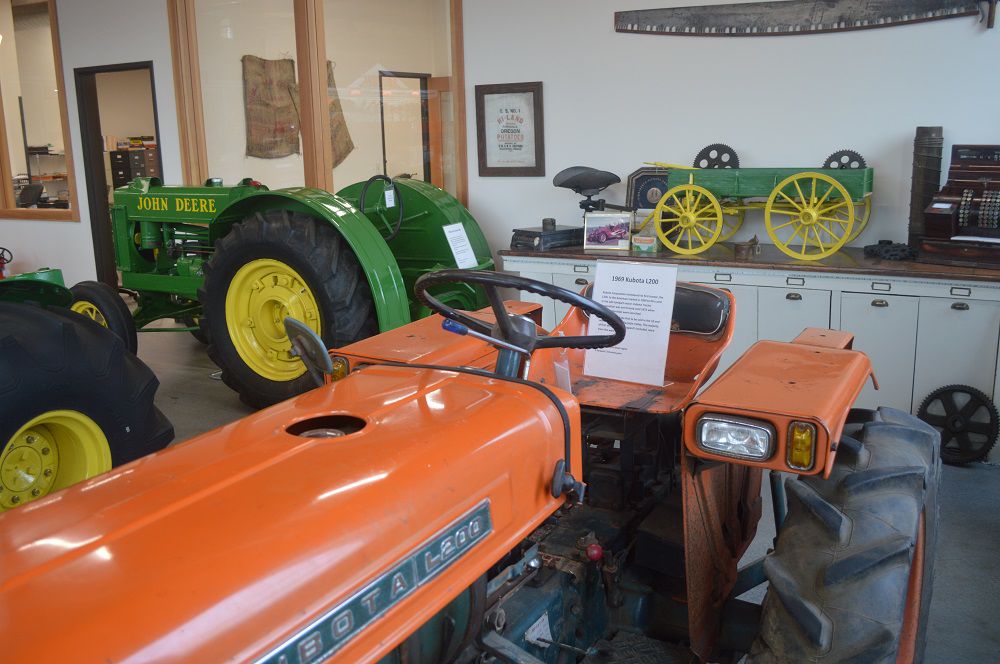 Inside the new store.

Sheppard trio in front of the new store, built in 2017 near the Hood River waterfront: From left, Craig, Bill and Ben.

Archives include books and manuals.

Inside the new store.

A sense of history prevails in the showroom at Sheppard’s Orchard and Vineyard Supply, fitting for a company that reached its centennial in 2019.

With artifacts and implements small and large on display, the Sheppard family has created what amounts to a small museum in the space it built in 2017 at the corner of Second and Riverside. Key museum pieces include a John Deere oxen yolk from the 1920s, tractors dating to the 1950s, a section of wooden irrigation pipe, bins along with weights and measures from the days when the company sold feed and seed, and books and documents from “John Deere Plow Co.” and Frigidaire, Toyota and Studebaker from when Sheppard’s sold appliances and cars and trucks.

A heavy plaque from Studebaker-Packard Company recognized Sheppard’s for sales of its vehicles.

A frame holds a potato bag from decades ago when the founding brothers had a share in a Parkdale potato farm.

After occupying two buildings at First and State for 90 years, Sheppard’s now enjoys a far larger showroom, customer service and office space, as well as triple the area for its essential business of repairing and maintaining clients’ farm and orchard equipment. Owners Craig and Ben Sheppard joke that they downplayed the 100th anniversary “because we had our big party a couple of years ago” with the move to the waterfront area.

Sheppard’s is the oldest continually-owned business in downtown Hood River, and among the oldest in the county — a status outstripped by a number of the family-owned orchards Sheppard’s serves.

“We’re proud of that, of course,” said Bill Sheppard, 92, who retired at age 68. “I come down two or three times a week. They let me open the mail. They let me do that to keep me happy. I’m not even very regular with that.” Sheppard’s is run now by Craig Sheppard and his son, Ben, who joined the company 14 years ago.

“There’s always been someone willing to come along and stay involved that’s younger,” Craig said. “You got to have someone that’s younger.”

Said Ben, “We all enjoy working together. A lot of families aren’t quite as able to do that. It’s been great.”

“It’s worked out well,” Craig agreed. “You have to have each person do some different things, but we also know what’s going on completely.”

“We talk every day about what’s going on in the entire business, but also on an hour by hour basis we’re focusing on different things, but we always know what each other is doing. We don’t always agree on everything, but we talk about and move on and it works really well.”

It’s the people they work with — customers and employees — that sustains the Sheppards.

“The best part is the people, having conversations, getting to know your customers, let alone the people you work with. A lot of customers you see all the time for years, and there’s always new people: The person who bought 10 acres in Goldendale and needs a tractor,” Craig said.

Ben said, “Talking, and listening to their story and hearing about their property and what they want to do, whether it be for business of fun, and develop a relationship you hope will last a long time. Most of the people who walk through the door, it’s not their first time. We’ve known them and their families for generations. That’s the best part.”

Ben said the constant over the past 20 years of running a farm implement business is a quote by Craig that was highlighted in a 1999 Hood River News story on the business: “The trend is toward bigger farm size. There are far fewer farmers owning bigger acreages.”

Sheppard’s closed out its line of John Deere a few years back, now specializing in Kubota, but tractors from 1954 and older stand prominently in that storeroom history display area.

“This business is pretty unique in size,“ Craig said in the 1999 article by Janet Cook (now editor of The Gorge magazine.) “There just aren’t many small ones like us around anyumore.”

The 1999 article continues, “An antique wooden cash register from the store’s early years sits on display on a counter ... testament to the companys’ roots in the 1900s.”

The “well-worn floors” of the State Street building have been replaced by new, solid material. Cook wrote in 1999 that “the steady stream of customers ... is testament to the company’s solid hold in Hood River’s future.”

Now in fourth-generation ownership, Sheppard’s began in the mid-valley in 1919 when two brothers joined forces: W.O.Sheppard and C.M. Sheppard, Bill’s father and uncle, respectively. The family came from Indiana. Another brother, George Sheppard, arrived first and started a ranch a few miles away on Dethman Ridge. Their father had owned a sawmill, and said, “There’s no more hardwood in this country,” Bill recounts. “George, the oldest son, started a mill, and called on my Dad and uncle to come out as teenagers, on the train, in 1908,” Bill said. (Bill’s dad graduated from Hood River High School in 1912; Bill graduated from HRHS, now Hood River Middle School. Ben’s sons attend middle school in the same building.)

C.W, and W.O. worked in the mill, located in the upper valley and later near former townsite of Fir, on Fir Mountain just east of Hood River. George’s farm on Dethman Ridge is still in the family, still a working orchard.

C.W. and W.O. joined forces with their adjoining farms, located in Duke’s Valley, near Odell. The Sheppard brothers merged their farm with that of their brother-in-law, Lee Allen, forming what was known as Sheppard Allen Ranch. (Lee’s son, Ed Allen, owned a car dealership on the Heights for years.)

From Sheppard-Allen Ranch, the brothers began in 1919 supplying local farmers, opening their first store in Hood River a few years later. The brothers rented space, and a truck, at First and Cascade from LeRoy Taft, who had a fuel oil dealership. They rented for a year or two and then bought the building. Craig notes that the specifics are unclear, as company records start in 1926. That’s when the brothers moved the store and shop to a pair of buildings that remain at First and State, according to a 2012 plaque on at the site.

The western-most of the buildings was remodeled in 2018 by its new occupant, Farmers Conservation Alliance. Sheppard’s logo still fills the east side of the building. It’s one of three downtown 19th-century businesses that have disappeared or moved, yet their names are preserved on exterior walls; the others are Franz Hardware and Kresse Drugs, facing each other at Second and Oak streets.

These days company serves the agricultural community, from large farms or orchards to owners of smaller properties.

In front of the store, Ben planted a vineyard he said has proven bountiful, and his sons harvest the table grapes.

“The new space has really allowed us to provide the service we had needed to, and wanted to for a long tme, and being able to stock more equpiment we can fill a sale or an order much more quickly, hopefully, and having a larger shop, our repair times and wait times have gone down dramatically as well,” Ben said.

The downtown exterior was sidewalk; now the business is fronted by lawns, plantings, and the vineyard.

“It’s a lot of work to constantly weed and landscape an acre of lawns and vines and   keep it nice. You’re looking at the landscaping crew,” Ben said.

Ten years ago, the company began to see increasing business from landowners growing grapes, and the trend seems to be a firm part of the business now.

“There’s a lot more opportunity. We don’t have wineries for the most part on the scale of the Willamette Valley or Walla Walla, but there are more and vineyards going in still and new winery-specific customers all the time,” Craig said. “The vinyeards give you more smaller-scale customers. The small-scale tree grower is pretty much gone. Not many people are going to come here and plant five acres of trees.

“I don’t think it affects the models of tractors we sell but it affects the way farmers are conducting business and the way they’re farming,” Craig said. “The way they stock their own fleets has changed and we’ve had to adapt and forecast differently. And it’s changing really rapidly. Cherries in particular, consolidation has been very rapid over the past decade: Larger and fewer each year. They farm differently and we’re constantly visiting and talking with them about how they’re adapting to their market and how they need to change their farming practices, so we can prepare for it.”

Ben said the key is “talking to people.

“They know their business better than we do, so as close a relationship as you have to the farmers, you keep it.”

Ben was 26 when he joined his father with the company. “I was never really planning on it when I was in college, but the quality of life and the life I wanted to have is this,” he said

Looking ahead, according to Craig and Ben, Sheppard’s future will be dictated extensively by the economy and commodity markets.

“A lot of things that are difficult to predict. There’s a lot of uncertainty,” Ben said.

One thing is certain, Ben said: “We’re not moving. No more building projects.”

1920 — Building at First and State built, first serves as a storage building

2017 — In July, Sheppard’s moves to its current location