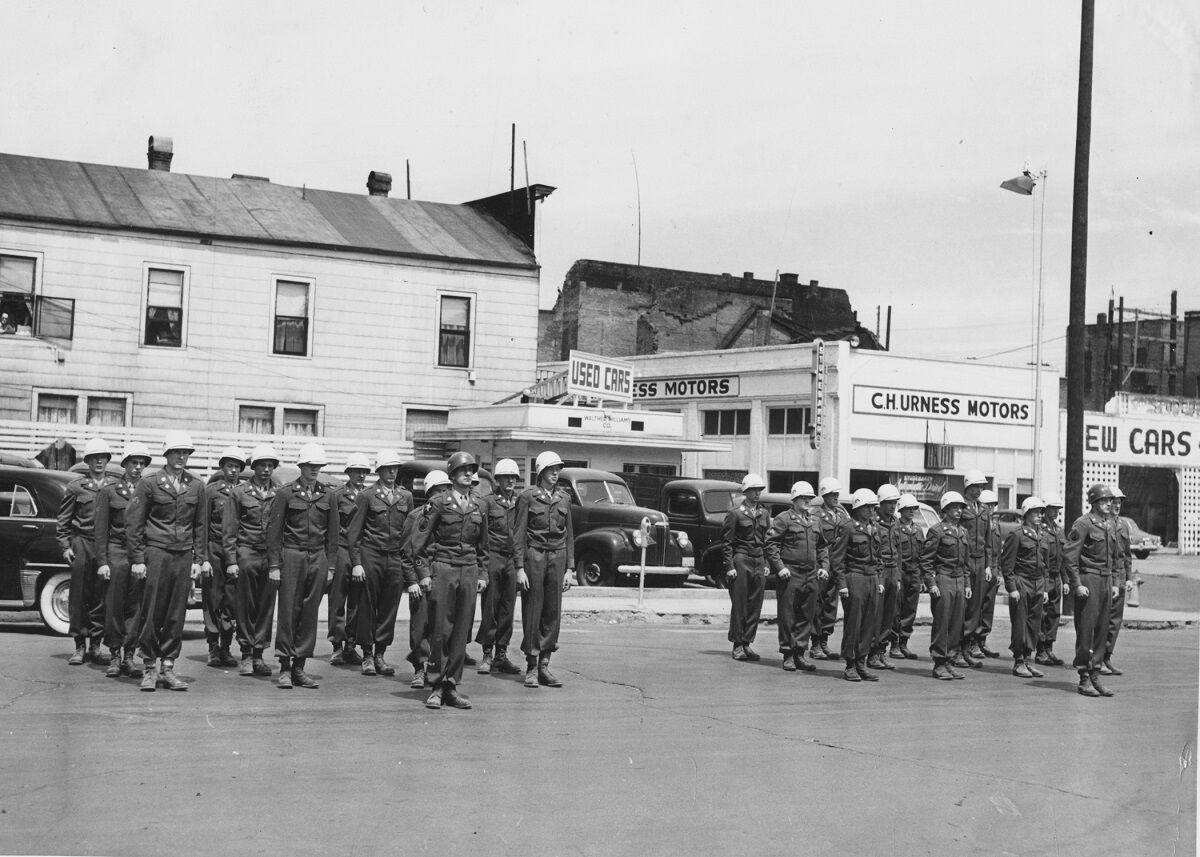 National Guard troops  based in The Dalles form up outside a former used car lot on Third Street, downtown The Dalles. Date of photo not recorded — If you know when the photo was taken, email markg@gorgenews.com with the details. 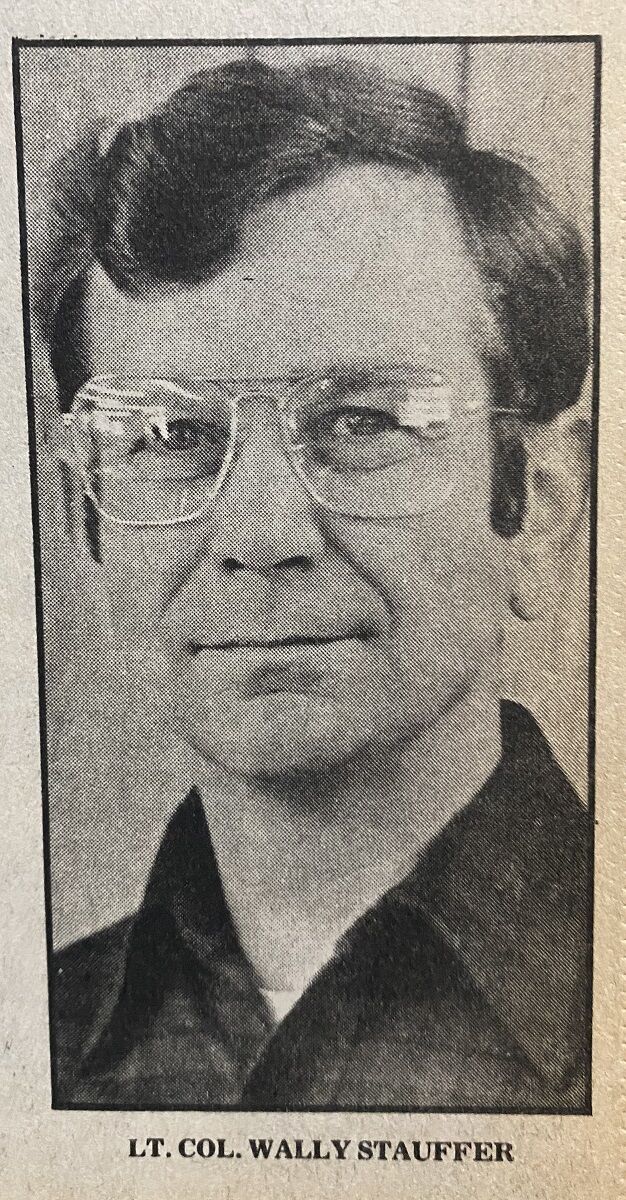 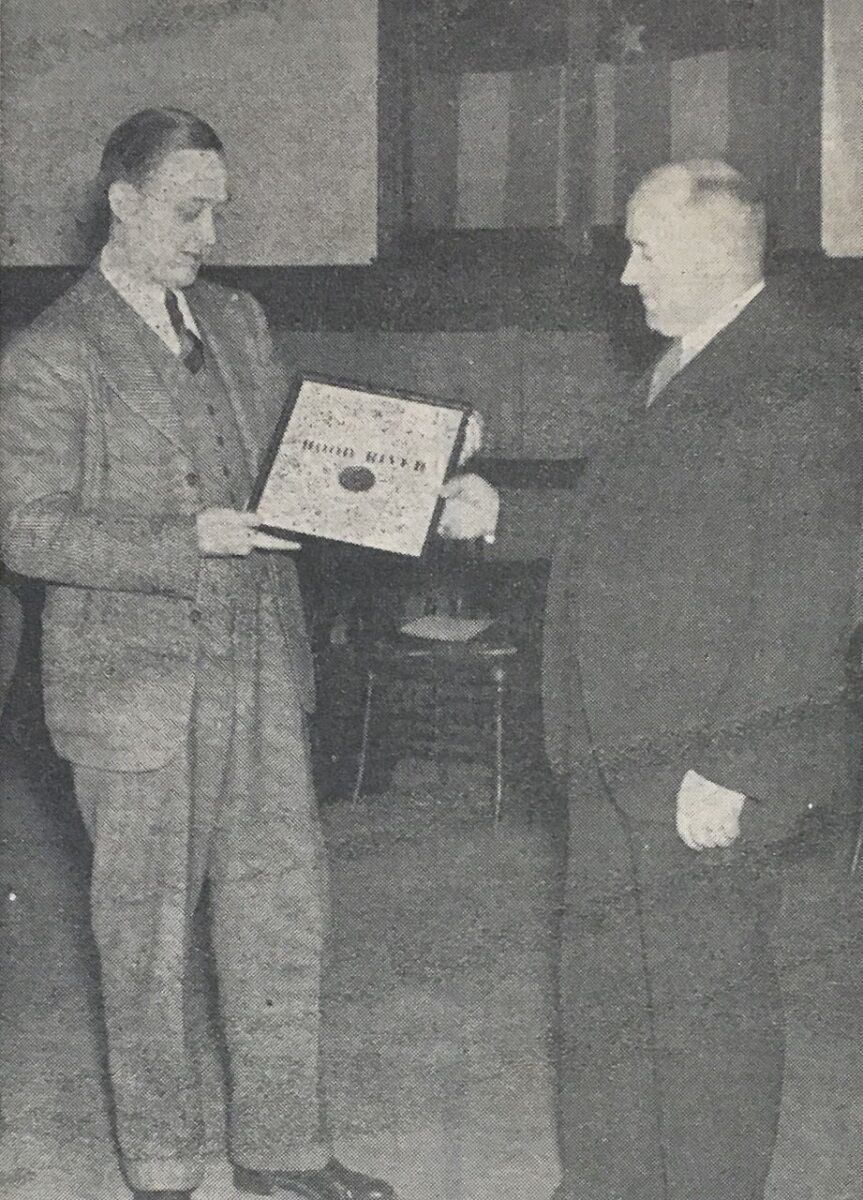 Mayor Ram Samuel on Monday, on behalf of Hood River City Council, accepted from Deputy Church, from Secretary of State Earl Snell’s office, a handsome plaque, which is now displayed on the south wall of Recorder Sylvester’s office. The plaque is the Honorable Mention award in the 1940 Traffic Safety Contest of Oregon, which was promoted by Secretary Snell. — March 21, 1941, Hood River News

Taking advantage of the absence of Senator and Mrs. Nickelsen on Monday night, thieves entered their ranch residence at Frankton and stole $12 in money, jewelry, two revolvers, ammunition and a number of other articles, valued at about $100. When the Nickelsen’s returned home, they found many articles lying around, as if the thieves had planned on moving the contents of the home. The door of the house bore evidence of having been hacked with an ax, but withstood the onslaught, the thieves, who are believed to be boys, having entered by a window. — Hood River News

The problem of how old is Ann has nothing on a case that is testing the wits of Circuit Court Judge Fred W. Wilson, a crowed of attorneys and 12 weary jurymen at the court house today. A heard of cattle, the ownership of which is disputed between three different litigants, is the cause of one of the most complicated cases ever tried in Wasco County. The cattle incidentally, were sold last August to the Portland stock yards, and probably long since have been consumed. — The Dalles Daily Chronicle

The one topic of conversation among residents who motored to and from Portland over the weekend was the spectacular and highly unseasonable forest fire in the area to the north of Beacon Rock in the Columbia River Gorge in Washington last Sunday night, had covered upwards of 4,500 acres of second growth and a small area of virgin timber. The fire was first noticed early last week and by Friday was believed to be under control. It had then covered about 2,000 acres. By Saturday, however, the wind had shifted from the east to the west and had gained greatly in velocity, giving the flames fresh impetus. — Hood River News

Persons receiving general assistance in Wasco county for the month of February numbered 387, according to the regular statistical report recently released by Wayne Satchwell, administrator of the local public welfare commission. The individuals served represented 125 cases with total obligations amounting to $2,039.84, it was revealed. Two hundred sixty-four dollars of this amount was placed under the heading of cash grants, $1,212.36 was requisition relief, $133 burials, $153.50 hospitalization and $276.98 other medical care. — The Dalles Daily Chronicle

Port of Hood River commissioners did what no other public agency in this county has in recent years Tuesday evening. They adopted a formal resolution that commits the port energies to active development of the tourist-recreation industry here to make it a basic industry for the county. The action came in an unanimous vote after Port Manger George Bartch urged the group to be “the first public body to publicly assume leadership in a direction everyone here agrees is vital for our economic future.” — Hood River News

Move Over St. Patrick — It was billed as the “First Annual St. Urho’s Day Parade” and it came off without a hitch at high noon on Oak Street in Hood River. It was a big day for Hood River’s Finnish community. Felix Tommillen (Felix Tomlinson?) (sic), an organizer of the parade, set the route and marchers followed it to the letter. “Mustering at Fifth and Oak, the parade route is eastbound down Oak Street to da nearest peer choint (sic).” — Hood River News

Having served with the U.S. Army at the Pentagon, NATO Headquarters and in Vietnam, Lt. Col. Wally Stauffer has returned to White Salmon and a job at Dickey Farms. But on Thursday about noon he will be back in his dress uniform to receive the Legion of Merit, the second highest award given in peacetime by the federal government. The ceremony is scheduled to take place at White Salmon City Hall, with Maj. Gen. George E. Coates, recently appointed Adjutant General for the state of Washington, flying in by helicopter to make the presentation. The award honors Stauffer for outstanding service for his career in the army from August 1960 to October 1980, when he decided to retire. In part, the citation reads: “Lt. Col. Stauffer’s performance throughout his military career recounts great credit upon himself, his family and the U.S. Army.” The former White Salmon resident attended first through sixth grade here, and moved around a lot because his father also had a career in the army. He later attended the University of Washington and was commissioned second lieutenant after attending Officer Candidate School. Stauffer saw the first of two combat tours in Vietnam from 1966-1967 as a mobile company commander. Under his leadership, his rifle company was one of two in Vietnam to receive the Presidential Unit Citation. The award was given for special recognition on the battlefield after a 10-hour battle in which the company fought its way out of an ambush by North Vietnamese Army soldiers entrenched in concrete bunkers. — White Salmon Enterprise

A queen to reign at the Wasco County Fair will be chosen during tryouts for the 1981-82 season Sunday, April 5, in the rodeo arena at the fairgrounds in Tygh Valley. To be eligible, a girl must be unmarried and have never been married, a resident of Wasco County for at least six months, 15 to 21 years of age. Contestants will be judged on horsemanship, neatness, personality and speaking ability. — The Dalles Daily Chronicle

This year’s production of the Lions Follies is gearing up for its five-night run starting March 30. This year’s show is titled “2001: A Follies Odyssey” at the Hood River Middle School auditorium. The show will include a reprise of former show numbers and feature many performers from past shows. This is the 25th year of the Lions Follies, a fundraiser that has raised more than $150,000 for the Lions Sight and Hearing Foundation. — Hood River News

Citing health reasons, Klickitat County Sheriff Bob Kindler retired on Monday, March 12. “I have some health issues and don’t feel I’ve been able to be as effective as I’d like to be,” said Kindler. “So I’m taking some time and getting those issues taken care of, and then I’m starting a new chapter.” Undersheriff Chris Mace, who has been with KCSO for the last two years and before that served as police chief of the Bingen Police Department, will serve as interim sheriff until the Klickitat County Board of County Commissioners can appoint a replacement. Traditionally, three nominees from the part of the person in office — in this case, the Republican party — will be presented to the commissioners to choose from. There will be a special election to fill the remainder of Kindler’s term, and another election for a full four-year term in 2002. — White Salmon Enterprise

Columbia River Gorge Commissioners and Gorge-area residents received a crash course in the content and organization of the 400-page “bible” for the Columbia River Gorge Scenic Area. Approximately 50 people attended the overview of the document known as the “Management Plan,” as the Commission prepares to review it for the first time since it was written. — The Dalles Chronicle

Bond Issue Is Swamped In Defeat

Proposed Measure Is Turned Down By More Than Two To One

Improvement Of Water Situation Now Up To Opponents Is Attitude

A heavy rain which fell throughout the major portion of yesterday did not discourage voters of The Dalles from turning out in sufficient numbers to overwhelmingly defeat the proposal that the city vote $250,000 in bonds for the construction of a dam and storage reservoir on upper Mill creek. The measure was defeated by 284 votes, out of a total of 792 votes cast. This is considered a very light vote for a city election.

The charger amendment on the ballot was also defeated by a large majority, 470 persons voting against the measure and 291 for it. This amendment would have effected several changes in the city water code, the most important of which was the defining of the duties of the secretary of the water board.

With the Mill creek dam and storage reservoir definitely eliminated from the possible plans for the augmentation of the present city water supply, the defeated exponents of this proposal today indicated that they will rest on their oars and await any further action by the opponents of the measure.

Dr. Fred Thompson, leader of the victorious faction which fought the bond issue, said this morning that he has no definite counter proposal for relieving the annual water shortage at this time. He intimated, however, that he will conduct a thorough investigation of a plan advanced whereby The Dalles would secure water from the east ford of Hood river. He expects to inspect the east fork of Hood river in person, as soon as snow there has melted sufficiently to permit the trip. — March 17, 1921, The Dalles Daily Chronicle

The first class in a series of six for city and county police officers in the Mid-Columbia will be held here Tuesday.

Federal Bureau of Investigation instructors will present techniques of investigation and identification during the initial class Tuesday.

The advanced police training courses are being conducted in 15 Oregon cities under sponsorship of the Oregon Association of City Police Officers and the Oregon State Sheriffs Association in cooperation with the Federal Bureau of Investigation, the Oregon State Police, League of Oregon Cities and the Bureau of Municipal Research and Service of the University of Oregon. — March 17, 1961, The Dalles Daily Chronicle

Britain To Trade With Bolsheviks

Maybe It Was A Leprechaun

Blackouts could spread to other states