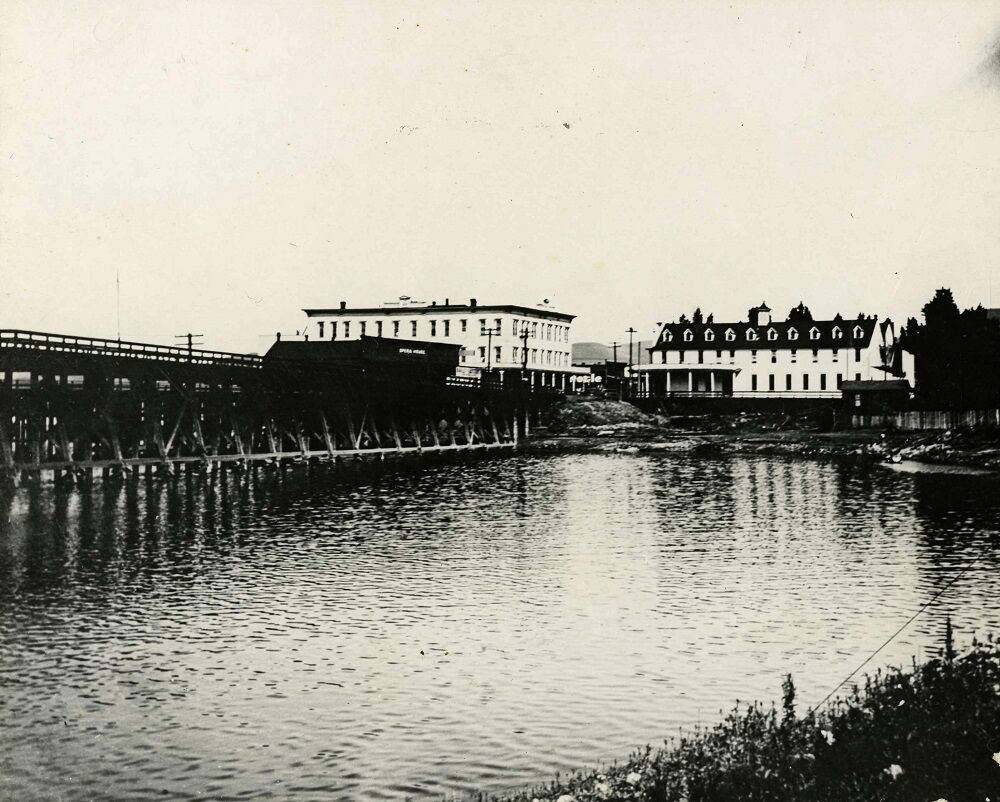 Mill Creek: Noted by the Lewis and Clark expedition as a brisk stream named Quinnette creek, suitable for running a mill, Wasco County’s Mill Creek, pictured above in the 1890s, once joined the Columbia River just west of downtown The Dalles. The creek was redirected into an underground tunnel 852 feet long and 16 feet in diameter in 1934. Seven acres of fill were created for railroads, highways and buildings, all in the vicinity of Union Street. The tunnel entrance is located at Thompson Park. 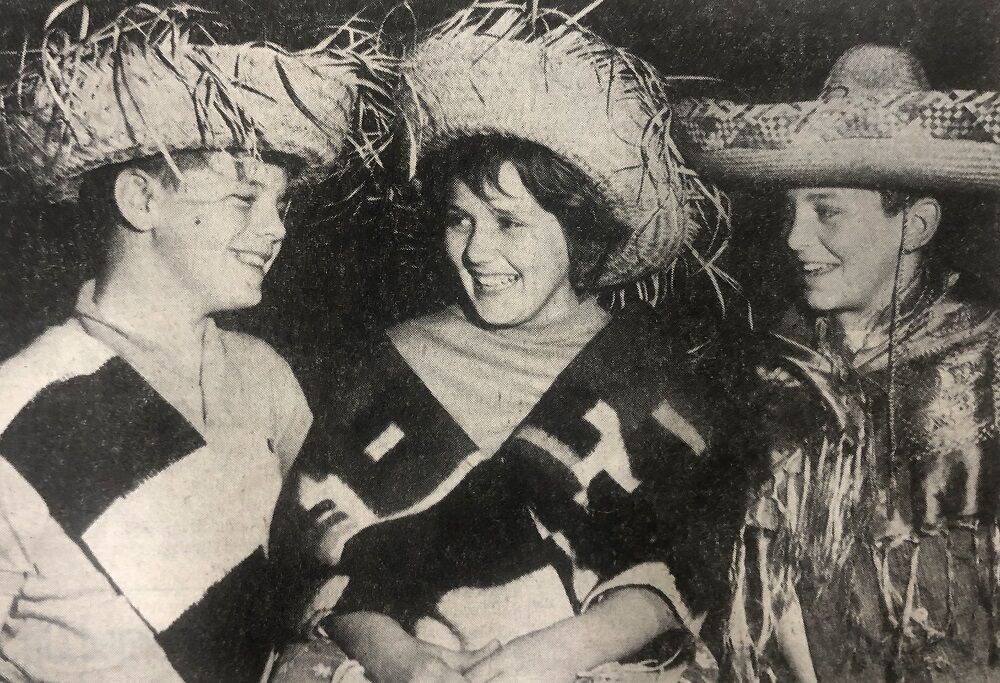 Fiesta Fun — Sixth grade pupils in Gordon Miller’s room at Colonel Wright school wound up their study of Mexico yesterday with a fiesta complete with costumes, displays and a candy-and-cake sale that netted money for a class project. Bob Krein (left), Vicky Calkins and Kenny Shannon appear above in south-of-the-border attire. 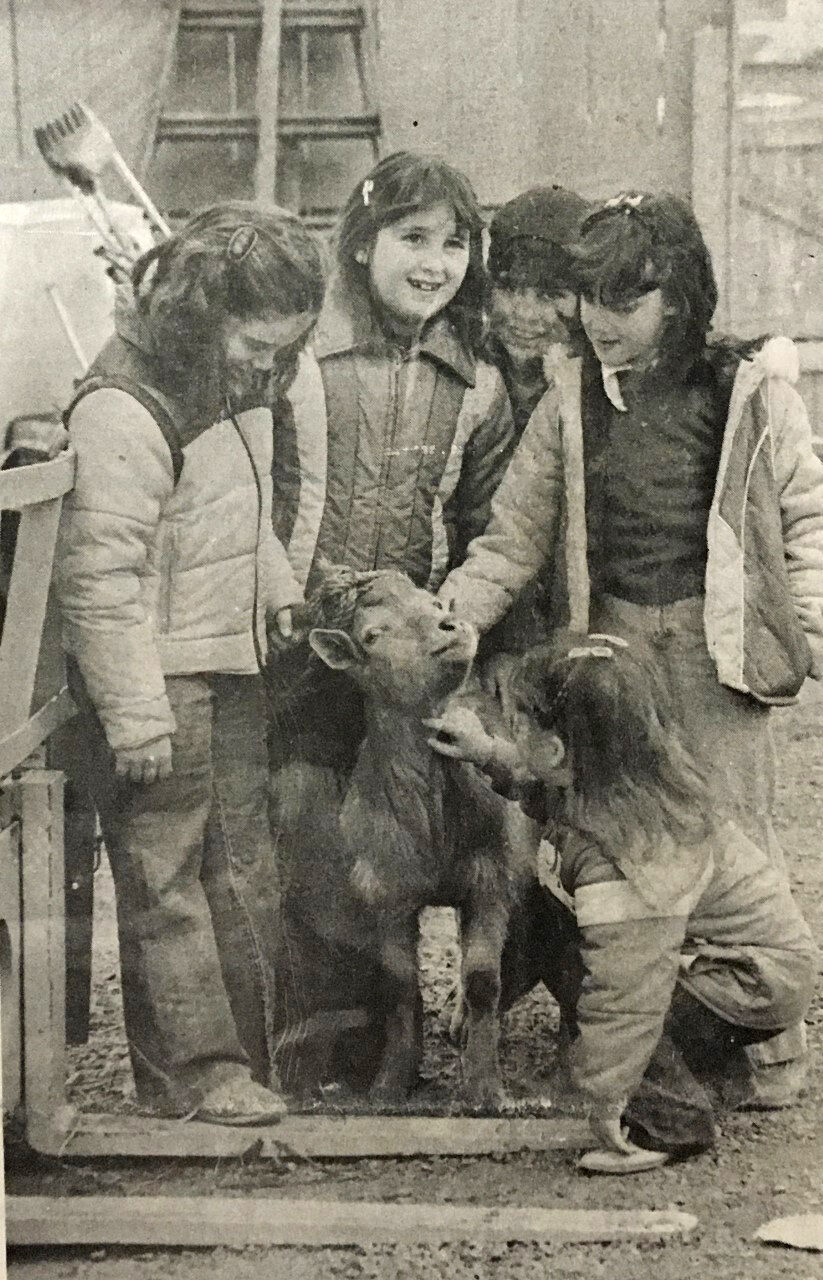 Day At The Auction — It wasn’t clear whether the pet goat was going to be auctioned off at the Pine Grove Fire Department benefit auction Saturday, but Brenda Sohler, Debra Meyers, Randy Sohler, Annie Meyers and Amy Sullivan gathered to inspect the merchandise just in case they had a chance to put in a bid on a new pet. John Moore took a careful look at a grass collector as a crowd of 500-600 gathered for the auction, which had sales of $25,000-$30,000 in donated and consigned merchandise. The highest bid of the day was $2,400 on a 1970 truck, and net proceeds from the sale will be used to by gas masks and extra hose replacement for the department. 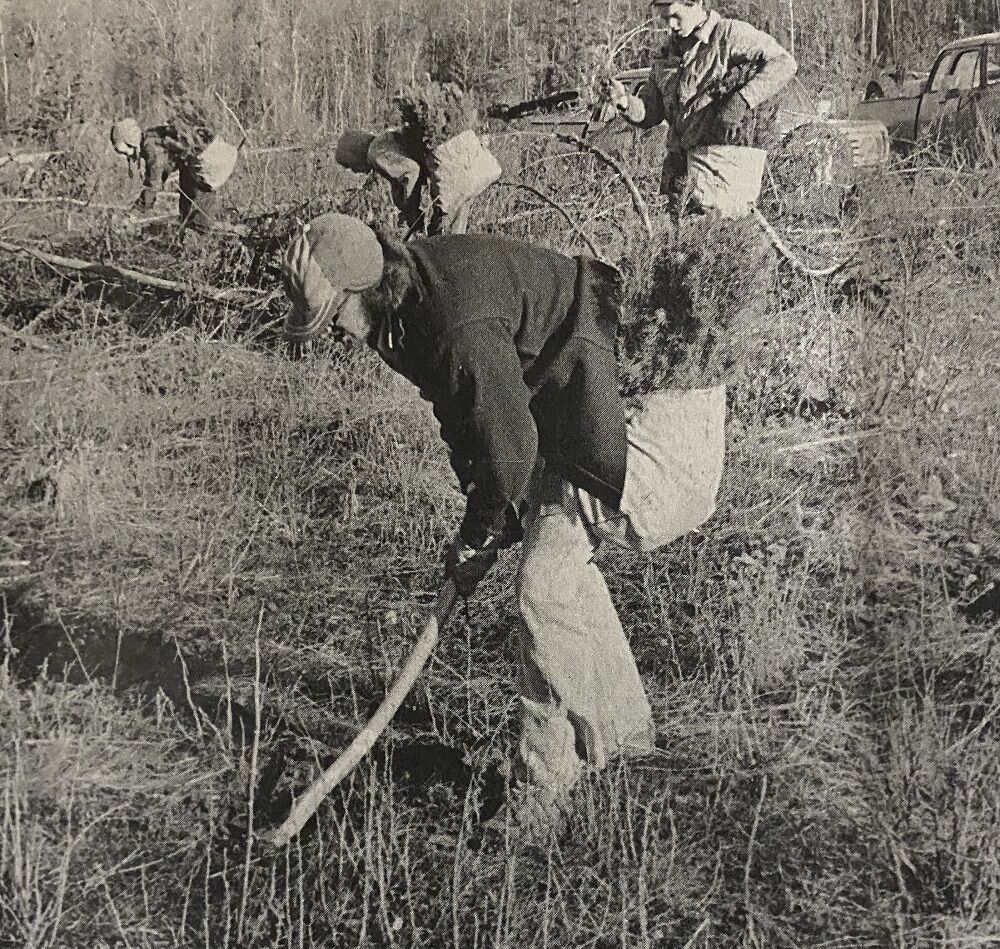 Karl Wilkie readies the ground to plant one of about 100 tiny trees he’s carrying in the bag over his shoulder for planting on one of several Department of Natural Resources sites in western Klickitat County.

Contracts involving expenditure of $1.5 million were let by the state highway department on Wednesday. The largest paving contract was on the Columbia River Highway from Hood River to a point beyond Mosier. When completed, this will give a continuous pavement on the Columbia River Highway from Astoria to Hog Canyon, between Mosier and The Dalles, with the exception of a small strip west of the city of Hood River, which will be taken care of by the council this year. For the 10.5 miles of paving between Hood River and Mosier, the contract was awarded to the A.D. Kern Co., and the cost is estimated at $350,915, or $33,000 per mile, the paving calling for being bitulitic (sic). — Hood River News

The Dalles-Wasco County chamber of commerce will hold “open house” Saturday evening at the temporary campaign headquarters, Second and Washington streets, in which the entire county is invited to sing, lunch and be entertained. The program will start promptly at 7:30 with a general community sing. — The Dalles Daily Chronicle

Proud of the new Texaco station which they are operating, at the corner of 12th and Pine streets on the Heights, Jo and Dick Roth report that business is good. This Texaco station is about the last word, up till now, in stations designed to meet the requirements of motorists and is, withal, a most attractive building in attractive grounds. Phil Galluzzo, local Texaco distributor, urges all motorists to see this station. — Hood River News

Spring officially will arrive in The Dalles this week, despite differences of calendar or weather, according to downtown merchants, who have arranged for The Dalles annual spring window opening at 7 p.m. Thursday night. Spring opening activities and special displays will be featured in all principal stores Friday and Saturday, following the window opening. — The Dalles Daily Chronicle

John Noble, one of the few Americans ever to return from a Russian slave labor camp, will tell of his experiences on March 14 at the Hood River High School auditorium.

Mr. Nobel received the 1959 Freedom Book award for his book, “I Found God in Soviet Russia.” Mr. Nobel will be introduced by Wilmer Brown, regional director for the National Association of Evangelicals, the organization who sponsors his appearance. He will also speak to the Lion’s Club at their noon meeting. — Hood River News

District 21 school board adopted a teachers’ salary schedule Thursday night calling for increases which, on the basis of present staff, would add approximately $40,000 to the total cost for 1961-61. Under the schedule adopted, $4,300 is the beginning pay for a teacher with a BA degree and no experience. — The Dalles Daily Chronicle

Blossom Weekend has been set for March 26, and the Pine Grove Boosters have once again made plans for a flea market to be held in the Pine Grove School gym. Those desiring to rent tables to sell arts, crafts, antiques, collectibles or other articles are asked to reserve a space. — Hood River News

Fruit processor and shipper George “Bun” Stadelman said Monday that within the past 10 years, fruit export from the Northwest had hit 20 percent, and more exports are needed to meet production. “They tell us we can’t feed the world, but we can,” Stadelman told The Dalles Area Chamber of Commerce. — The Dalles Daily Chronicle

A tree planting program, funded by the state legislature earlier this year, has commenced in Western Klickitat County. One hundred and fifty thousand tiny Douglas Fir trees were unloaded into freezer trailers at the State Department of Natural Resources compound in Husum this week. Groups of DNR workers will soon be planting trees across multiple sites in the county. — White Salmon Enterprise

Hood River County has been awarded a $13,920 solid waste grant to establish recycling depots in rural Hood River Valley communities. The depots should be established by June or July, said County Recycling Coordinator David Skakel. “We’re now searching for locations, and working with residents of the two communities, in Mt. Hood and Odell,” he said. The biggest benefit of the grants is likely reduction of the solid waste rate increase that is anticipated in June. — Hood River News

Three The Dalles classic car enthusiasts took the prize in their classes last weekend at the prestigious Portland Roadster Show. Don Budd, Terray Harmon and Steve Hudson — the only three The Dalles entrants, in their first showing — each took Best of Class in their particular category. — The Dalles Chronicle

No injuries or property damage were reported in the area following the Feb. 28 earthquake, which was centered in Pierce County, although residents reported feeling dizzy in response to the quake’s motions. “We had time to look at each other, and then the blinds started shaking,” said Henkle Principal Mary Alice Walker. “I got on the intercom and yelled, ‘Duck and cover.’ We talk to them about earthquakes, so everyone knew what to do.” — White Salmon Enterprise

Father Proposes To Stand By Boy And Son’s Wife

Capricious fate ordained that Norman Hogan of The Dalles should go to jail for six months before he could find the father for whom he had been searching for more than 25 years.

Hogan was fined $500 and sentenced to six months in jail by Justice of the Peace Allen Tuesday when he pleaded guilty to a charge of manufacturing whiskey. He was arrested at the Umatilla house with other men on March 3.

Russel Hogan, a rancher who resides in the Five Mile district, read in The Chronicle of the conviction, and after discussing the matter with friends who knew his intimate family history, went to the county jail to see if the prisoner could by any chance be his son.

The father quickly recognized Norman Hogan, and the reunion was an affecting one.

Norman Hogan’s young wife is in The Dalles hospital where she has been confined during the birth of a son. Russell Hogan went to see her, and is making arrangements to take the young mother and her infant to his ranch, there to reside until Norman is released.

Almost 30 years ago, it is said, Rullell Hogan and his little family, consisting of a wife, two sons and a baby daughter, resided near Grass Valley. One day the little girls drank a concoction of concentrated lye. The effects of the fluid were not immediately fatal. The child was very ill, however, and Russell Hogan is said to have sent his wife and children to Idaho, where her mother, it was thought, could give the baby better treatment.

This was the last that Russell Hogan saw of his family, until the reunion this week with Norman.

For the first Mrs. Hogan secured a divorce from Russell Hogan, and the boys were placed in an orphanage. Eventually the brothers became separated... March 10, 1921, The Dalles Daily Chronicle

The Wasco County Tuberculosis and Health Association has received official notice to vacate its X-ray Center from its present location at the corner of Fifth and Court streets.

In a letter to association Chairman P. Everett Curtiss, the Wasco County Court has indicated its intentions to dismantle starting July 1 the house in which the center is located.

“Due to the extremely crowded condition of our parking area and the continuing demand for more parking space, we are forced to go ahead with plans to remove the building to complete our parking area,” the court explains in the letter.

The old wooden two-story house is the last of three on the west courthouse lot to be torn down for a courthouse parking lot.

Chairman Curtis confirmed this morning the association was informed of the court’s plans over a year ago. He said a new location for the X-ray Center had not yet been picked. March 10, 1961, The Dalles Daily Chronicle

Columbia Center for the Arts showcases ‘Best of the Gorge’