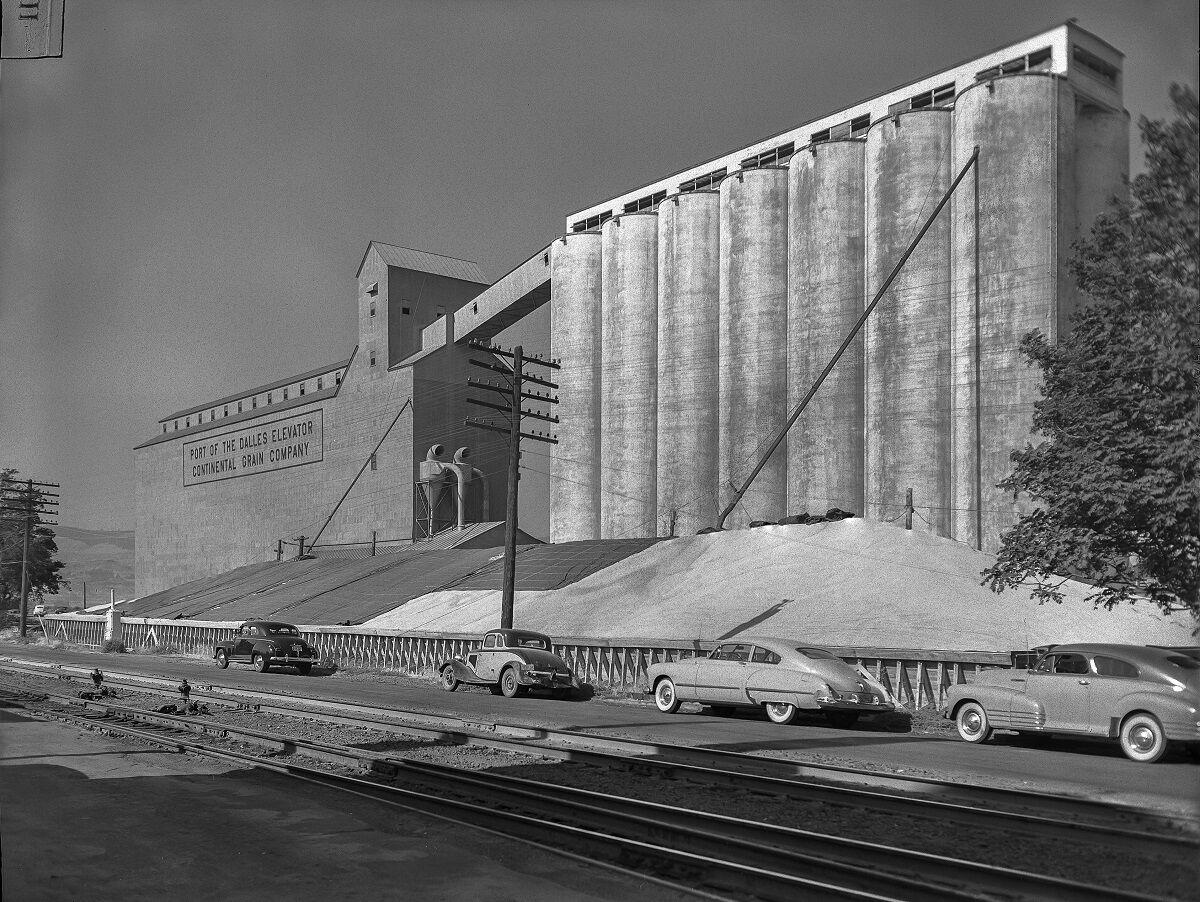 Wheat is piled and covered next to the Port of The Dalles Grain Elevator for loading in September 1950. The elevator was located downtown The Dalles. Have more information regarding a photograph published here? Email Mark Gibson at markg@gorgenews.com. 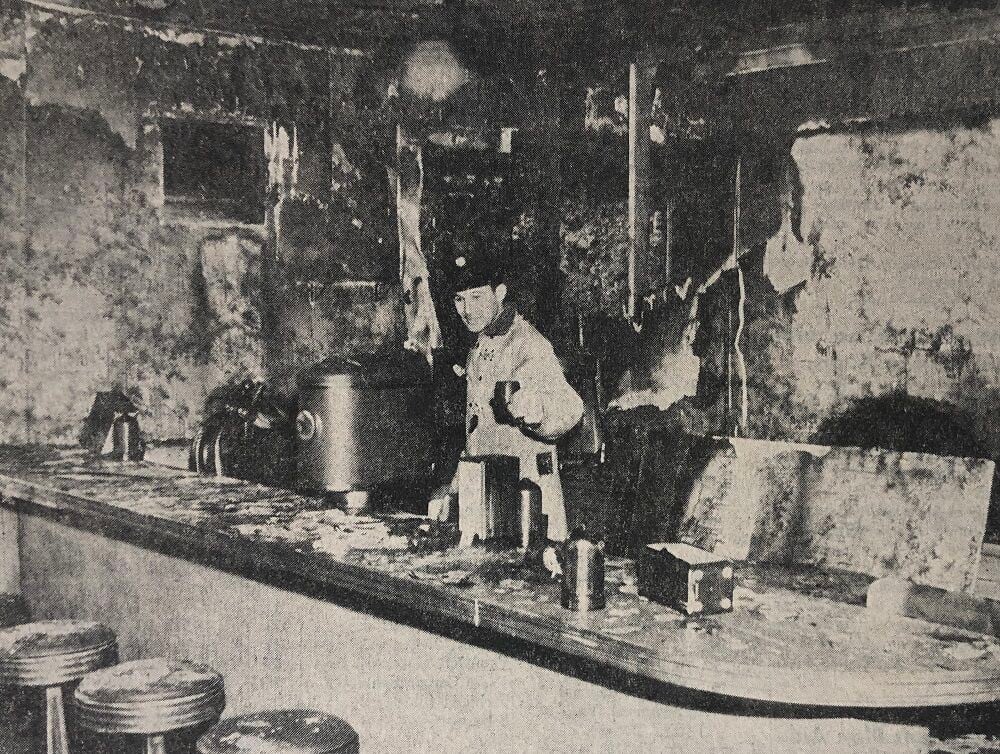 Charcoal Broiled — Dalles Fireman Jim Comini plays the part of a waiter behind counter of charred Holiday Café. Interior of the café was seriously damaged by flames, heat and smoke last night when a fire mysteriously erupted in the kitchen area behind Comini. Upstairs area was occupied by three apartment dwellers. They fled the building unhurt when fire was discovered. Café has not been operated for some time.

With the advent of below freezing temperatures and the appearance of ice on the slough below the depot, quite a number of residents have greased their skates this week in anticipation of some skating before the end of the year. Last year, just when the ice was at its best, snow fell and put an end to all hopes. — Hood River News

Starting Jan. 31, County Agricultural Agent E.R. Jackman will stage a “farmer’s week” at the local courthouse, in which experts from all parts of the state will consult with the farmers of Wasco County and advise them upon matters of vital interest to them. — The Dalles Daily Chronicle

A new home economics department and a new classroom are to be built in the basement on the north side of Hood River High School, according to a decision arrived at by the board of directors. It is estimated the cost of the improvement, which will complete all interior construction work in the high school, will be between $8,000 and $10,000 and money for the work is already available in a fund established for this purpose. — Hood River News

The Wasco County grand jury — reconvened in special session to investigate the alleged defalcation of funds involving ex-Tax Deputy Guy Duvall — drew a recess today after submitting a special report to Circuit Judge Fred W. Wilson in which it was disclosed that a complete audit of the books in the sheriff’s office will be made under the direction of State Auditor Sam Star. — The Dalles Daily Chronicle

Fishermen — and hunters — if you intend to fish or hunt on Jan. 1, a 1961 license is required. The 1961 licenses are now available at all license agents throughout the state and sportsmen are urged to purchase the new licenses as soon as possible so they won’t be caught short at the beginning of the new season. Resident license fees remain the same, $4 for an angling license, $4 for a hunting license or $7 for a combination license. Persons who intend to angle for salmon and steelhead during 1961 must also purchase the $1 salmon and steelhead license. — Hood River News

A pair of fires kept county and city firemen busy last night at almost the same hour. One of the two fires occurred in the Holiday Cafe on E. Second Street in The Dalles. The other damaged the John Bible home a short distance east of Mosier on the old Columbia River Highway. — The Dalles Daily Chronicle

Douglas Medler, manager of The Dalles branch of the Benjamin Franklin Savings and Loan Association, was elected president of The Dalles Area Chamber of Commerce on Monday. — The Dalles Daily Chronicle

(1979) Bingen and White Salmon representatives met Thursday afternoon to discuss the long-debated police merger and agreed they were interested in a consolidation only if it saves each city money. “I think one town or the other should run the police department and the other town should pay for it,” said White Salmon councilor Amel Burris. “In my opinion, I’d rather see you guys run it. You have a jail.” — White Salmon Enterprise

The Bikes are back. That was good news for a local family in The Dalles, after someone — Phil and Lydia Barrier still don’t know who — returned two motocross bikes stolen the day after Thanksgiving from a locked shed at the couple’s home. The family distributed flyers around town asking for information, and their story ran in The Dalles Chronicle. Nonetheless, the family had just about given up hope...then, this past Wednesday night... “Lo and behold, I saw something yellow leaning against the ivy in the alley,” said Phill Barrier. “I walked over and looked, and there were both of the bikes.” — The Dalles Chronicle

Longtime Lyle resident Gail Castle has been living in her home for the past 35 years. It’s one of those wooden farmhouses, the kind built in the early 1900s before insulation or even concrete foundations. She admitted last December that the house probably would not last another year, However, the 2000 winter season has arrived and Castle has yet to build a replacement home. Now, she is in the midst of an appeal to the Columbia River Gorge Commission because Executive Director Claire Peachy denied her application to build one, citing a Management Plan that requires in-kind replacement to follow the exact footprint of the original home. In her appeal, Castle told the commission she makes her living growing hay and raising horses and cattle. “I just want to replace the old house with another one as close as possible to the old one...” said Castle, who applied for a single-story house to replace the two-story farmhouse. — White Salmon Enterprise

Over the past weekend, influenza got in its work, especially in the town area, with the result that, on Monday morning, many reported one or more members of their families under treatment, while several who had appeared for their usual work were home before noon — at doctor’s orders.

Most of the attacks were, according to local doctors, of a mild type, yet severe enough to keep patients in bed for several days and cutting down desire for a Merry Christmas.

A little girl’s unshakable faith in Santa Claus paid off this Christmas, although not before her parents had spent some worried weeks.

You see, the little girl wanted a certain kid of doll for Christmas, a Nancy Ann doll. She had asked for one the year before, too, but Santa Clause didn’t realize the importance attached to this particular kind of doll, and the doll he brought her was a different kind.

She lover her new doll anyway, but soon started talking again about a Nancy Ann doll. It seemed a little girl she had played with had one, and had since moved away from The Dalles, but no other do had won the little girl’s heart like that one.

The only thing was, no one else seemed to know what a Nancy Ann doll was, what one looked like or where one could be purchased. And all the little girl would say, when her mother or daddy asked about a Nancy Ann doll, was, “Oh, you just wait until Christmas Eve, they you’ll see Santa will bring one then.”

All the faith of a million children who believe in Santa Claus and fairies shone in her eyes as she soothed her anxious parents. For true faith this little girl had — she clapped longer and harder than anybody when Peter Pan asked children to clap their hands if they believed in fairies.

Many shopping expeditions — and by then somewhat frantic telephone calls — followed these conversations. Finally, however someone was found who knew all about Nancy Ann dolls.

Flu Closes Wasco To All Travelers

Orders were received at the local office of the O.-W.R.&N. yesterday to sell no more tickets to Wasco, that town being under a strict quarantine because of the prevalence of influenza there. Nobody will be permitted to enter the town without a special permit.

The strict measures taken in the neighboring town follow a fresh outbreak of the epidemic in that vicinity. All public places where people congregate have been indefinitely closed and loafing in all stores and places of business is strictly prohibited. However, the schools were not closed, the idea being that the children were possibly as well off in school, where there is some regulation of their habits, as to be turned loose to run helter skelter and roam the streets at will.

Crowds Line Up At Bars In Welcome

Capitalist, Labor and Tradesman To Blame For Slump

Roosevelt Pleased At Reaction To Address

First Shots Kill One In Belgium

The show goes on for TDHS drama department