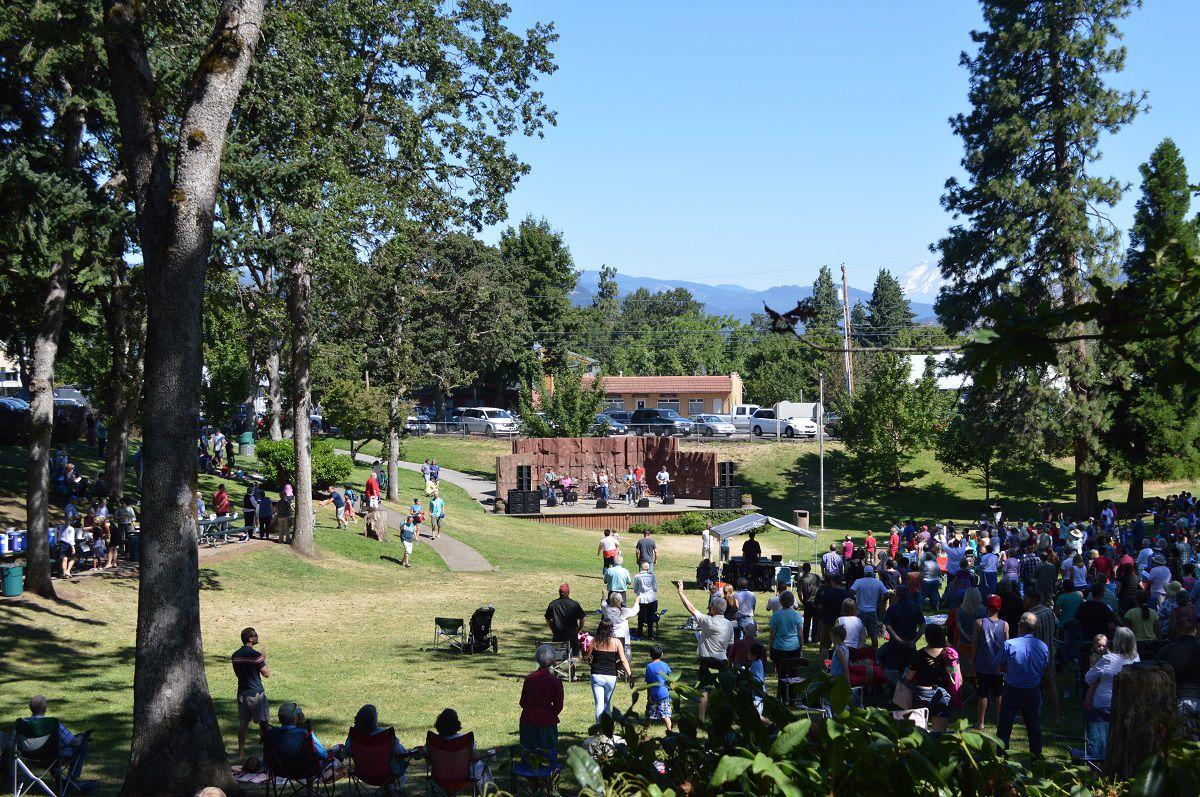 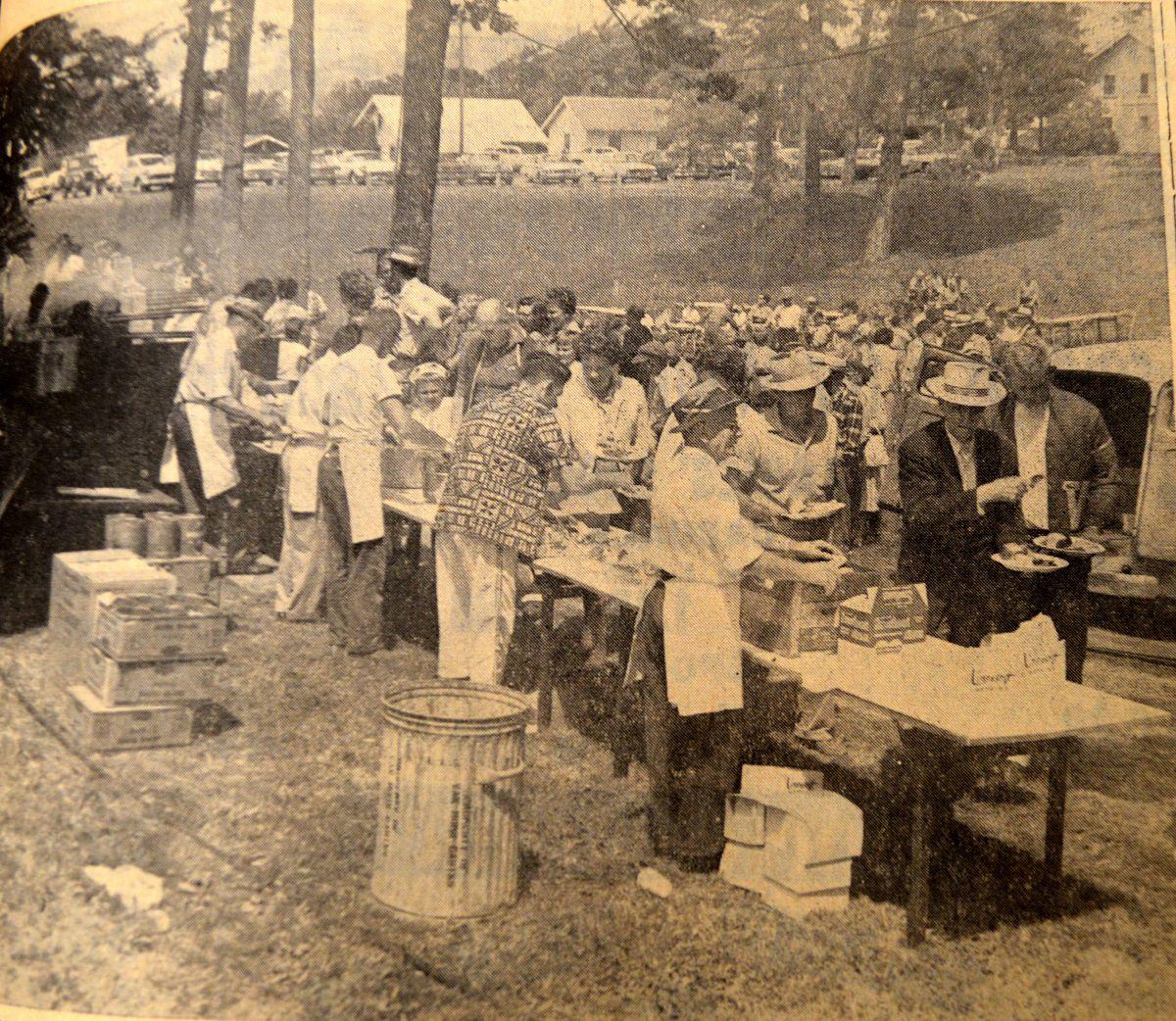 A 1961 Hood River News clipping showed the park on July 4, and the park has been the focal point of Independence Day events ever since. 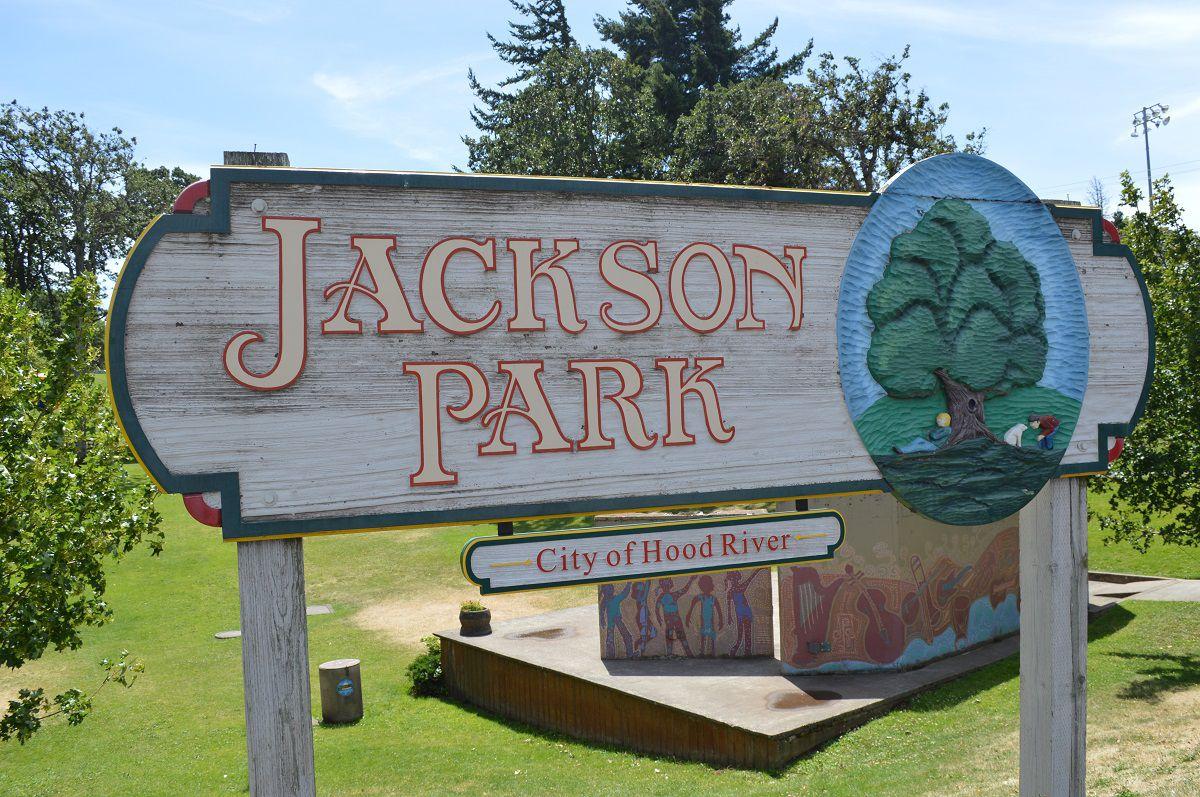 The sign near the north entrance stands above the 1986 stage. On the back of the stage is a mural, drawn by Janet Essley and art students, to honor Mike Schend, who spearheaded the stage project.

A 1961 Hood River News clipping showed the park on July 4, and the park has been the focal point of Independence Day events ever since.

The sign near the north entrance stands above the 1986 stage. On the back of the stage is a mural, drawn by Janet Essley and art students, to honor Mike Schend, who spearheaded the stage project.

The decades have matured Jackson Park. What began as a humble, hilly plot of grass and trees has become a truly impressive family gathering place, thanks to a continued effort from the community throughout the years.

Today, the park thrums with activity. As many as 2,000 turn out for the popular Families in the Park series hosted by Hood River Community Ed, which features performances by live bands, as well as grand scale movie nights, projected onto a huge screen.

Jackson Park remains the largest city park in Hood River, encompassing an entire city block, tucked between May Avenue to the north, 13th street to the east, and Taylor Avenue to the south. The slopes form a grassy bowl where families can relax and play in the park’s mature oaks and conifers.

The origins of Jackson Park trace back to July 10, 1939, when a local rancher, M. Vilate Jackson, donated the land to the City of Hood River. Vilate and her husband, Charles Jackson, owned land along present-day Highway 30.

The park was originally named Memorial Park in honor of the Women’s Relief Society, a Church of the Latter-Day Saints philanthropic group, of which Vilate was the local president. In 1942, a tree was planted and a marker placed to celebrate the centennial of the society.

Over the decades, the site became a gathering place for family events, including barbecues and drive-in movies. A July 6, 1961 article of the Hood River News reported 900 diners “braving the winds” at “Memorial Park” on Independence Day for a beef and potato salad barbecue. They also came to witness movies at the Trail Drive-in Theater, the News reported.

The biggest decade of transformation was the 1980s, when Mike Schend, former Hood River Community Education Director, launched the Families in the Park series. Along with the concept of free music and movies in the park, Schend dreamed up a concrete stage to house the festivities.

“They thought I was nuts in the first place,” said Schend. “It was tough trying to sell this thing.”

Many saw the steep incline and unique basin structure of Jackson Park as a “worthless piece of ground” for concerts — too steep for a band to play from, and a difficult place to host an audience.

Schend launched the Families in the Park series in 1982 as a means for “families to come together,” but the program stumbled at first. Due to the merciless grade of the park’s slopes, there was nowhere to fit a full band or sound equipment. Desperate volunteers attempted strapping speakers to trees in some cases, Schend said.

In 1984, the Hood River Lions Club donated a concrete pad to the park’s northwest corner (where the stage now rests), but the piece was meant more for picnics than for grand scale concerts. Without a raised platform, it was still difficult to see performers from that spot.

“It was time to come up with a solution to ‘Where are the entertainers going to perform from?’” said Schend.

From there, Schend drummed up support. He requested that the City Council put the issue on their agenda, and they agreed. Then, he reached out to local businesses for donations. By the end of 1985, his fundraising efforts through Community Education generated $5,600. However, the estimated cost of the stage was more than triple that at $20,000.

It was a combination of luck and generosity that sealed the park’s creation.

Labor was one of the biggest looming costs. Schend couldn’t find a source of skilled volunteer labor until he spoke with John Brennan, who taught the high school’s construction class. It turned out the class had been unable to sell their most recent house, and Brennan was looking for another venue in which to ply their skills.

Jackson Park’s signature events in the summer are the venerable Families in the Park series, each Thursday in August, and the Saturday Movies in the Park series, which started in 2002 using a portable projector (updated a few years ago) and screen (the original is stlll in use) purchased with help from a Lions grant.

The shows start at 6 p.m. with an opening act, headliner at 7; bring a picnic or purchase food from vendors. Quarterflash headlines on Aug. 13.

Movies in the Park has expanded in recent years to Fridays in Cascade Locks (see schedule below) and on July 12, the system was used at Mt. Hood Town Hall, courtesy of Community Ed and Parks and Recreation District.

The Cascade Locks (Marine Park) series begins July 24 with ‘Mr. Peabody and Sherman” (PG); July 31, “How to Train Your Dragon;” Aug. 14, “The Princess Bride;” Aug. 2,”Frozen;” Sept. 6, “Big Hero 6.” All are rated PG. All movies start at dusk. Bring layers of clothing and low-folding chairs or blankets. Drugs, alcohol and tobacco are prohibited.

“He (Brennan) said he would love to do it so his students would have a project,” said Schend.

Then, several businesses rose to the occasion for the material component of the project. Hood River Sand and Gravel donated 50 percent of the $10,000 required for concrete and filling, as well as their concrete “pumper truck” to get the job done. A local electrician, John Nigl, set up the electrical system free of charge, with a hookup donated by PPL electric company.

“What happened was kind of a miracle,” said Schend.

Crews finished the stage in spring of 1986, with plenty of time to open up the park for summer festivities.

Schend said the program’s attendance “really took off” with the completion of the stage. Since then, movies and music at Jackson Park has become a staple of family recreation in Hood River.

Attendance has been over 2,000 at some concerts, said Schend. He estimated 3,000 people would fit in the total expanse of Jackson Park if they were packed in.

Also wildly popular are the movie nights. Hood River Community Ed shows 12 to 15 flicks a year at the Movies in the Parks series, held Saturdays throughout the summer. The program has branched out to the Marine Park in Cascade Locks as well due to its popularity.

The Park and its neighbors

Jackson Park is used throughout the year for community events, picnics, concerts, and worship services. Large groups need to reserve use through the City of Hood River but picnic tables, the wide lawn and the playground and public restrooms are available during daylight hours to anyone.

Jackson Park is just one part of a larger recreation-education-public service complex along West May Avenue.

The park directly abuts Collins Field, the baseball field named for the late Sarge Collins, which is next to Tsuruta Courts and Hood River Aquatic Center, both operated by Hood River County Parks and Recreation District. Collins Field is widely used for soccer, lacrosse, and ultimate Frisbee, and the tennis courts are open to the public at no charge, though scheduled lesson and competition times for Community Ed and Hood River County Schools get first priority.

Next to the courts and pool is the Hood River Fire and EMS (Ty Taylor Station) facility, which has a large meeting room available for use. Running along the south side of Collins Field and the tennis courts is an unimproved trail access officially known as Meyer Parkway.

And north across May is historic Hood River Middle School, home to numerous school and community events, including Thursday Hood River Farmers Markets. All four sides of the building feature some kind of student art work — murals, sculptures, paintings, and metal work — that anyone may walk around and view at their leisure.