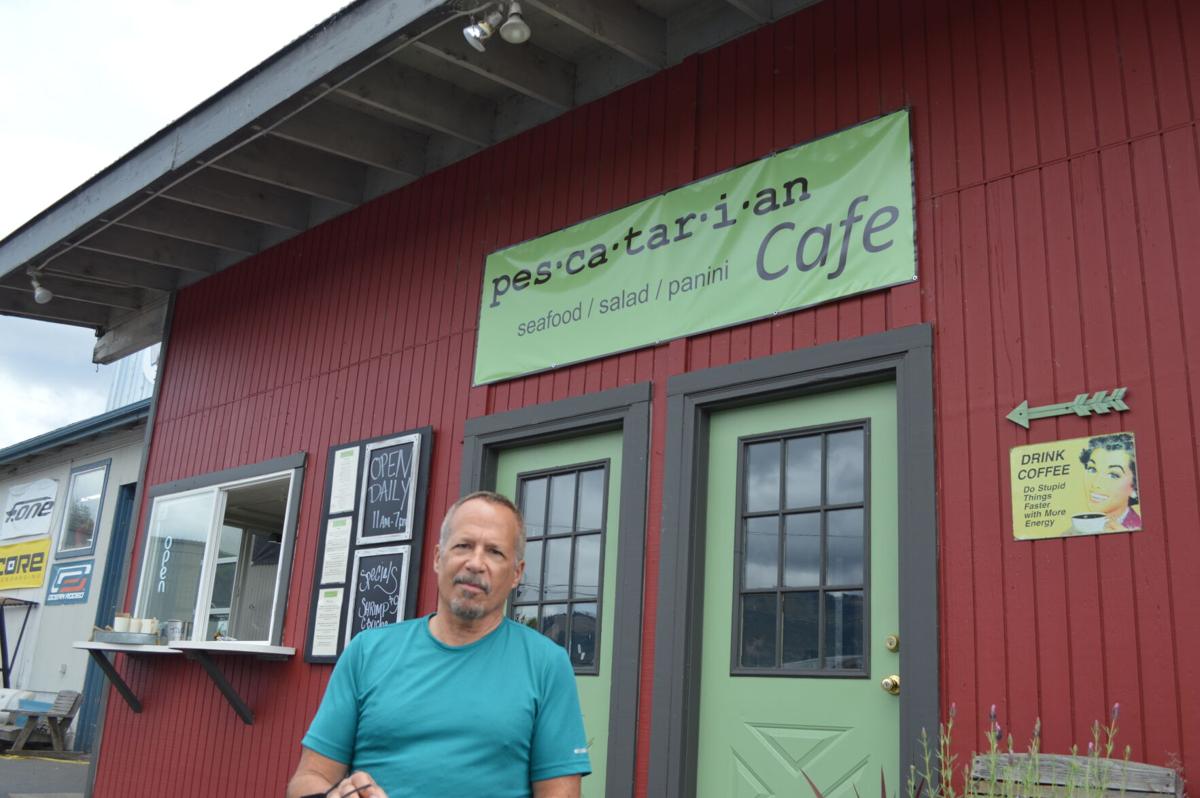 Eric Laslow opened Pescatarian and No. 9 Smok-hous on Button Bridge Road, near the Highway 35 intersection, in July. 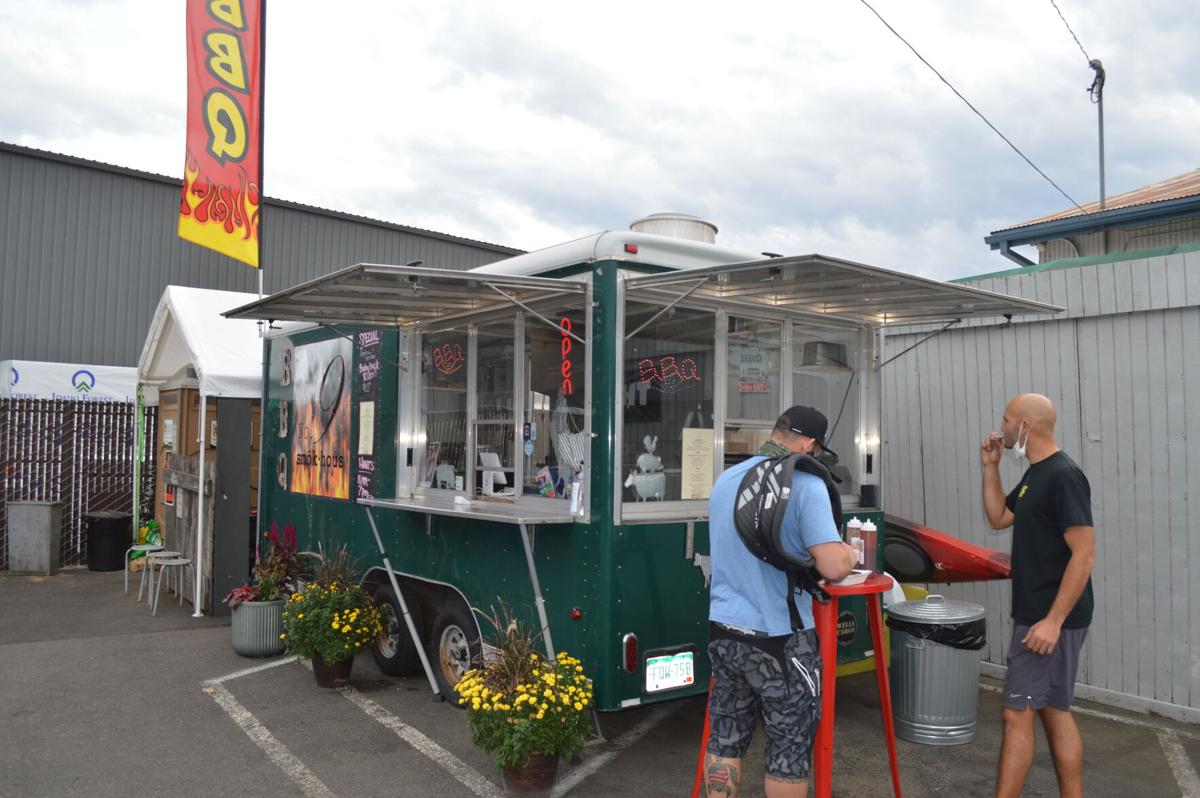 Kevin Cohen and Andreas Ochoa of Hood River taste brisket at No. 9 Smok-hous.

Eric Laslow opened Pescatarian and No. 9 Smok-hous on Button Bridge Road, near the Highway 35 intersection, in July.

Kevin Cohen and Andreas Ochoa of Hood River taste brisket at No. 9 Smok-hous.

Two sides of the culinary coin are run by one food guy at the vibrant business center on Button Bridge Road in Hood River.

Pescatarian Cafe, with a seafood orientation and No. 9 Smok-hous food truck, are located near the Highway 30 and 35 intersection at Hood River’s east entrance, in the commercial complex that is also home to the anchor Windance board shop, Treebird Market (formerly Mother’s), Wild Columbia Salmon stand, and Lampoeii Thai food.

Eric Laslow opened Pescatarian in July and the No. 9 in August.

“This (Pescatarian) is the lighter seafood preparation-driven, and that’s full-on traditional barbecue,” he explained, pointing to the green, flower-surrounded Smok-hous.

“It was a long, arduous process,” Laslow said of getting both up and running, refitting the truck from his previous operation, and preparing the Pescatarian space that has turned over several times as coffee shops and cafes. Food is prepared fresh daily, and Laslow does most food prep in a commissary off-site.

Laslow’s business size was in the plan from before the coronavirus hit. He said, “I don’t know what the future of fine dining is, but this was my concept anyway. It was what I wanted to do. I guess I just felt lucky.

“It’s a challenging thing, at times an uncomfortable period for people,” Laslow said, when asked about opening a restaurant during the pandemic. “It helps that it’s a small operation,” he said. “Window service really speaks to this time we’re in. People still want to go and not necessarily cook at home, and a lot of people are still not comfortable dining in.”

While No. 9 is full-on carnivorian, Pescatarian is named for the general diet allowing fish and seafood.

“That’s what our menu is about. Vegetable forward with a strong seafood presence,” he said, including trout or salmon paninis.

“It’s got a fresher, lighter approach,” he said, citing his ceviches. “They’ve been super popular,” incorporating razor clams, rockfish or other protein.

Just steps away, at No. 9, find brisket, ribs and other slow-smoked fare along with sides. Both outlets are open daily from 11 a.m. to 7 p.m. and are take-out only, though at Pescatarian people are enjoying a few outdoor seats,

“We have an indoor space but it’s pretty tight for the way things are right now,” he said. “Hopefully once the winter settles in,” he can offer indoor dining.

He’s up sometimes in the middle of the night to check on brisket and other meats as they slow cook, but he has help from an app called Fireboard, which tells him the temperature and moisture status of each individual piece of meat as they spend up to 12 hours in the smoker. He gets readings on his phone, and from gauges on a monitor on site.

“I have a solid read on each piece of meat,” he said. “Knowing where the temperatures are in each piece of meat allows me to treat each piece differently,” he said. Laslow uses a Texan-style butcher wrap for his meats, infusing them with moisture such as a vinegar-water solution. The cloth preserves the moisture but also the texture — the beloved crusty bark.

For example, he typically starts with mesquite for an hour to “really punch it up” and then switches for a longer time with hickory, which is robust but not as “brash” as the mesquite.

Smok-hous No. 9 is so-named because it is the ninth restaurant operation opened by Laslow, a prominent figure 20 years ago on the Portland dining scene. Laslow’s Northeast was named top restaurant in Portland in 2001 and he also owned Broadway Bistro and Cuban-influenced Malanga. He moved to Denver to do restaurant consulting, and ran food cart and a champagne bar. In Leadville, located at 10,000 feet elevation, he owned a craft beer and oxygen bar.

“I’ve simplifed my life a little and got done with the high-end restaurant scene. It suits my life better to do something simple,” he said. “I identify more as a shop owner than a restaurauteur.” Pescatarian “is a restaurant, certainly, but smaller scale, with a more organic approach to it, if you will.”

“I prefer simplicity,” Laslow said. “I like vivid flavors and a clarity of flavor, made from fresh product. I’ve been running kitchens 41 years now and I like to think the most important ingredient is the one you leave off the plate, using a handful of quality ingredients, seasoned well. I try to keep it light.”