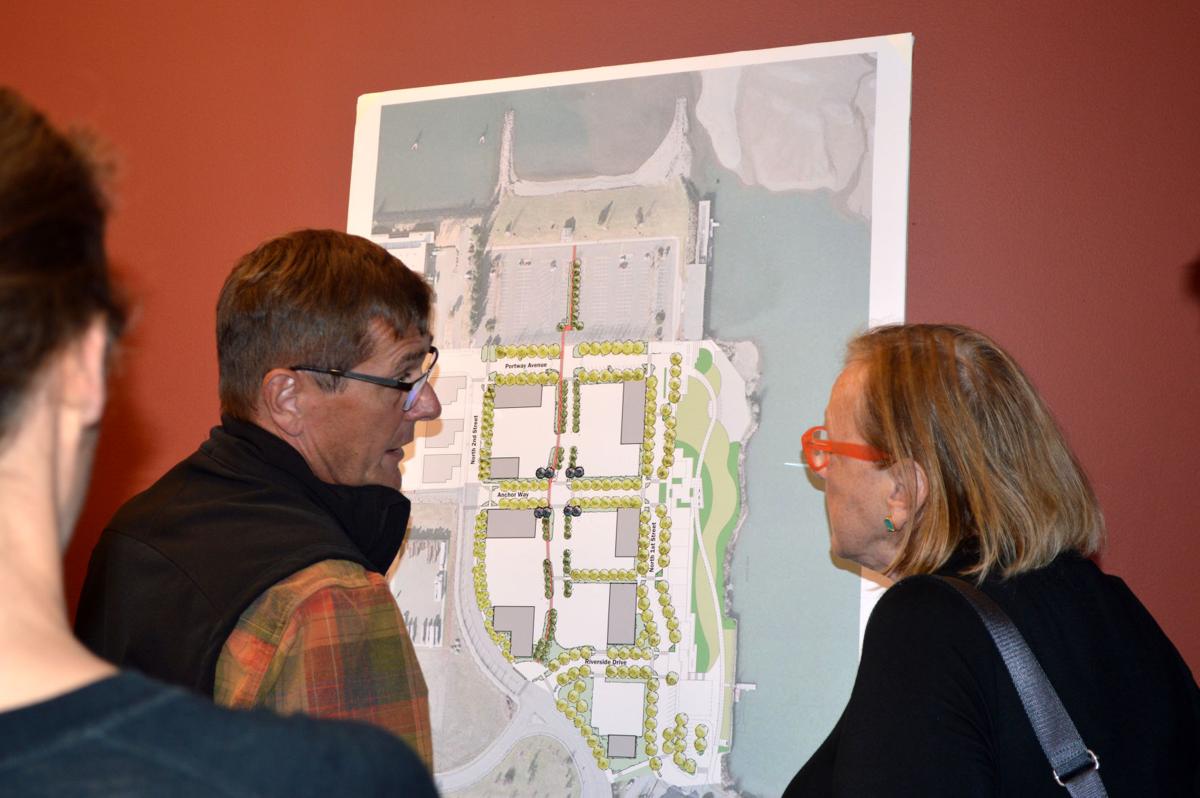 Port commissioner Rich McBride and city planner Cindy Walbridge discuss a proposed Lot 1 design by Walker Macy consulting firm at an open house Tuesday evening. The plan lays out how sections of the 7.5-acre waterfront property will be used for combined light industrial, parking and pedestrian access. The red line at center is a pedestrian pathway cutting north through the entire parcel. 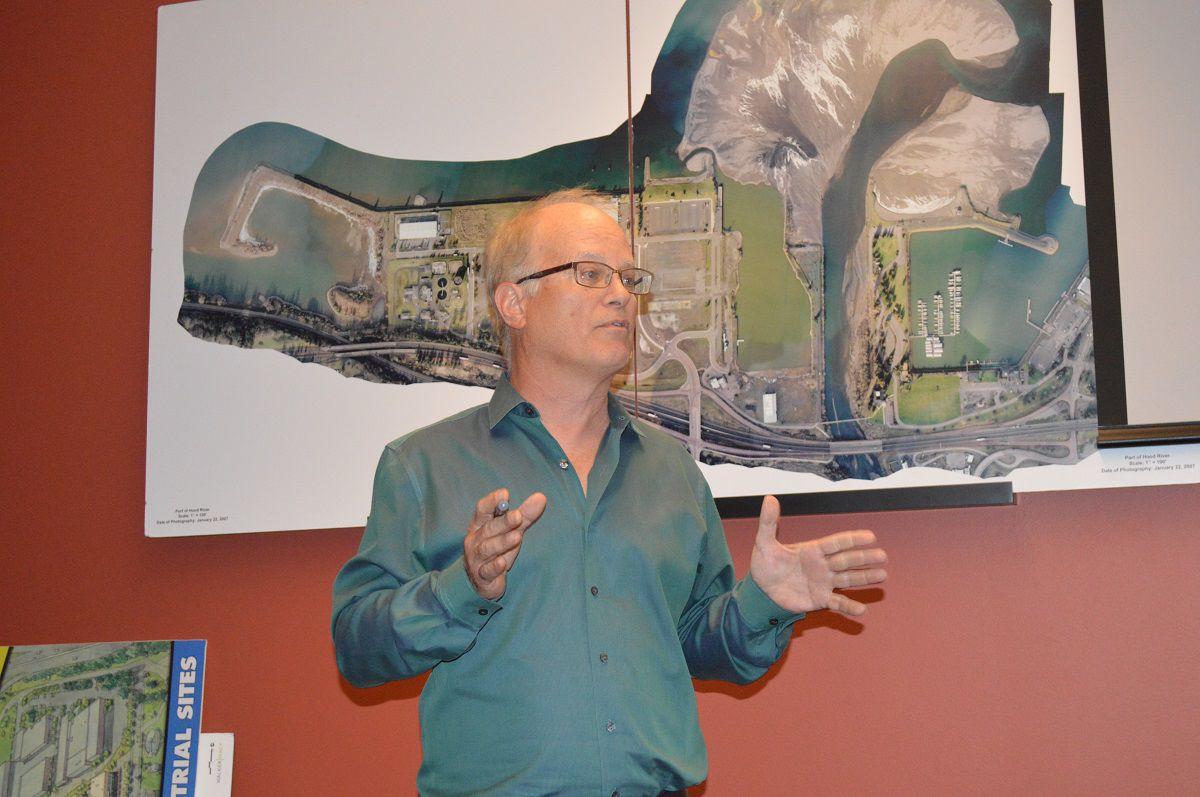 Mike Zilis of Walker Macy architecture and planning firm presents designs for Lot 1 at an open house at the Port of Hood River conference room Tuesday.

Port commissioner Rich McBride and city planner Cindy Walbridge discuss a proposed Lot 1 design by Walker Macy consulting firm at an open house Tuesday evening. The plan lays out how sections of the 7.5-acre waterfront property will be used for combined light industrial, parking and pedestrian access. The red line at center is a pedestrian pathway cutting north through the entire parcel.

Mike Zilis of Walker Macy architecture and planning firm presents designs for Lot 1 at an open house at the Port of Hood River conference room Tuesday.

An open house held Tuesday by the Port of Hood River rolled out new plans for Lot 1, the final remaining undeveloped parcel on the waterfront.

The event convened port commissioners and city leaders, as well as about 20 members of the public, to examine plans by Walker Macy, a Portland-based architecture and planning firm, who have sketched out a conceptual future for the barren waterfront piece.

Lot 1, a 7.5-acre patch of land tucked between Second Avenue, the Event Site, and the nascent Nichols West Edge Trail, has remained vacant for years except as a parking lot during seasonal events.

The goal of the open house, said Port of Hood River Executive Director Michael McElwee, was not to change Lot 1’s light industrial zoning (a “fixed point”) but to consider the Walker Macy design, and discuss how design strategies can best meet the needs of mixed light industrial, vehicular and pedestrian uses.

Mike Zilis and Christopher Miller of Walker Macy presented a design that cuts up the parcel into a grid of subdivisions in a “block system.” Potential businesses would be “fairly large,” sited in buildings up to 45 feet tall, and laid out within a network of parking lots.

“They’re very likely going to be three-story buildings, the size of Dakine as far as height,” said Zilis. “Their actual scale is going to be dependent on the use.”

The onus for the new development strategy was the city’s Waterfront Refinement Plan, adopted in December 2014, which addressed zoning and design standards on undeveloped areas on the waterfront. The plan guides the current Lot 1 development and doles out parameters for potential building types, sizes and allowed uses.

The maximum footprint for the buildings is 25,000 square feet, according to the city’s waterfront plan. By comparison, Dakine’s footprint within its property is 14,000 square feet and Tofurky’s is 24,000.

The city’s plan states, “All buildings shall incorporate design features” including “offsets, balconies, projections, window reveals, or other similar elements,” in order to prevent a large stretch of uninterrupted buildings without façades.

Zilis said these building features will provide “edges” and a sense of enclosure to the development blocks.

Vital to the Lot 1 concept is a “view corridor” – no buildings will be tall enough to block off the waterfront from initial sight, and all will follow façade guidelines for a cohesive view, according to Zilis.

Along with its aesthetics, physical access for pedestrians is a top priority. Running through the center of the entire development is a tree-lined walkway for pedestrians.

“There should be very ample connections for pedestrians into these lots, with the idea that them being available on the off hours for community use,” said Zilis.

“This is like the first time that humanity is landing on the property … the commission is here listening to the input and looking at this concept right in step with everybody else,” said port president Brian Shortt.

Shortt said he wasn’t necessarily calling it final or “the holy grail” of plans, but “we do like what we’re seeing so far.”

The waterfront has been abuzz with development this year — the Nichols West Edge Trail opened to the public in July, and construction is underway on the Naito hotel at the south dip of Nichols Basin.

But Lot 1 likely won’t see physical development any time soon — at least five to ten years, McElwee predicted. He indicated the next step for the port upon finalizing the conceptual plan will be to designate legal lots within the greater, undeveloped parcel and send that application to the city.

Other than Lot 1, all remaining parcels on the waterfront have an outlined purpose.

The nearby Expo Site property is set for sale in October, with a Turtle Island (Tofurky) distribution building coming in as the first piece of development.

The port also has a sale agreement for Sheppard’s, a local orchard equipment company, to relocate onto the corner of North Second Street and Riverside Drive, formerly known as the “Burger King property.” Sheppard’s is slated to break ground on the new site in spring.

In light of recent development and increased pedestrian and vehicular traffic throughout the waterfront, congestion cropped up as a key issue at the open house event.

Zanmiller said he liked the design concepts but he had some “anxiety” over the “porkchop” of land at the south entrance of the waterfront, where pedestrian and vehicle traffic could conflict.

Walbridge gave an update on traffic congestion at the Second and Cascade intersection downtown, which connects to Portway in a “big circle.”

“We’re meeting our trigger points much more quickly than we thought we would,” said Walbridge. “We’re closer to 2020 then we are to 2015 right now.”

The port and Walker Macy have considered multiple options to remedy waterfront traffic. One option is a stop light, but that infrastructure cost would be expensive, said McElwee. More likely, the grid-like block will be used to divert and slow down drivers, said Zilis. Turning left could be prohibited all the way to Anchor Way in order to prevent cars from turning back around and blocking the Interstate 84 onramp.