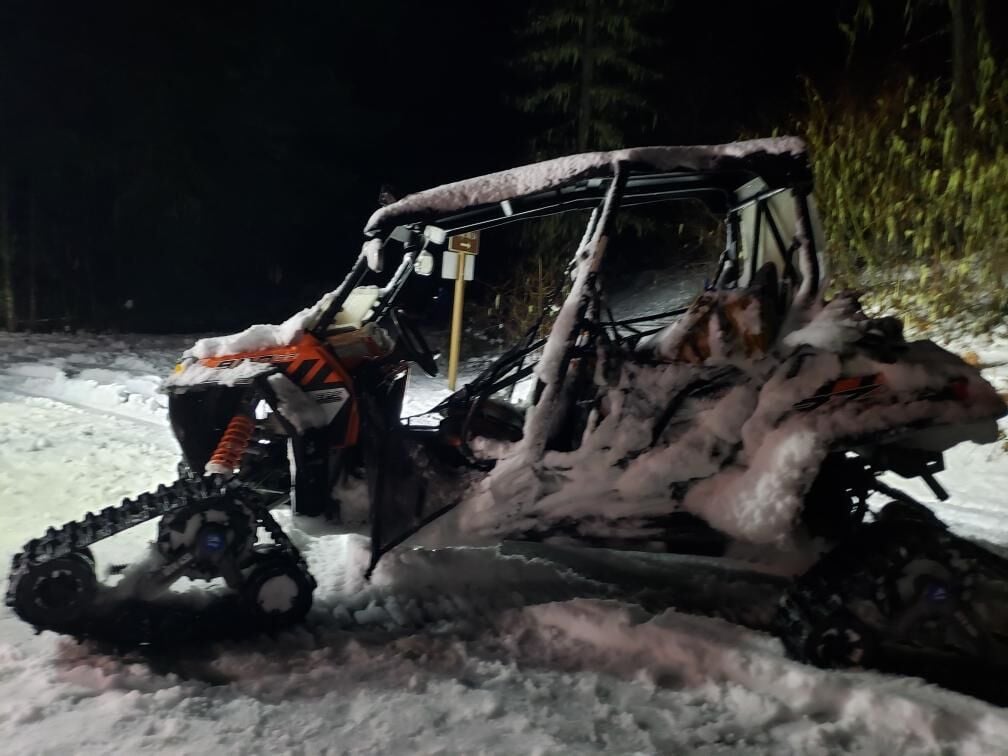 The Polaris RZR with tracks used by one of the teams of Trout Lake locals who ascended Mt. Adams in search of the 17-year-old skier, seen here on Sat. Jan. 29. 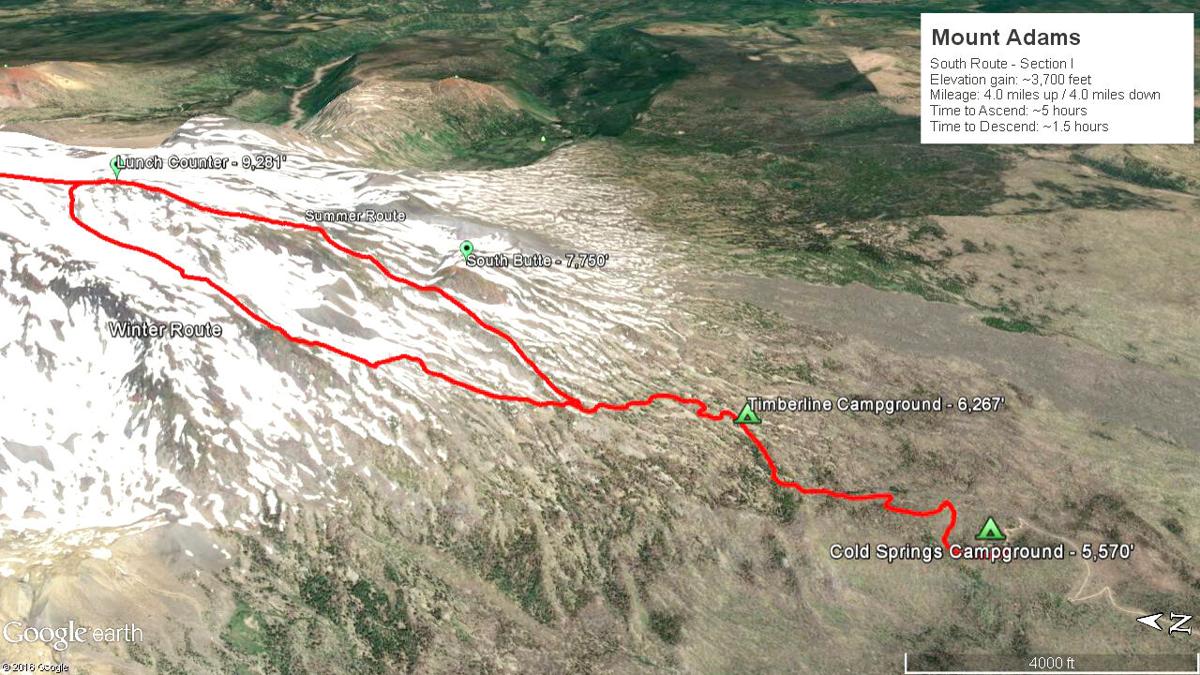 The Lunch Counter, seen here, is located on the south side of Mount Adams. The skier was found in this area, nearly 9,000 feet above sea level, in the early morning of Jan. 31, thanks to satellite GPS systems which allowed for communication, though robust and minimal, between the skier and his father, Jacob Stock, who coordinated with a team of mountaineers to ascend the mountain and rescue him. 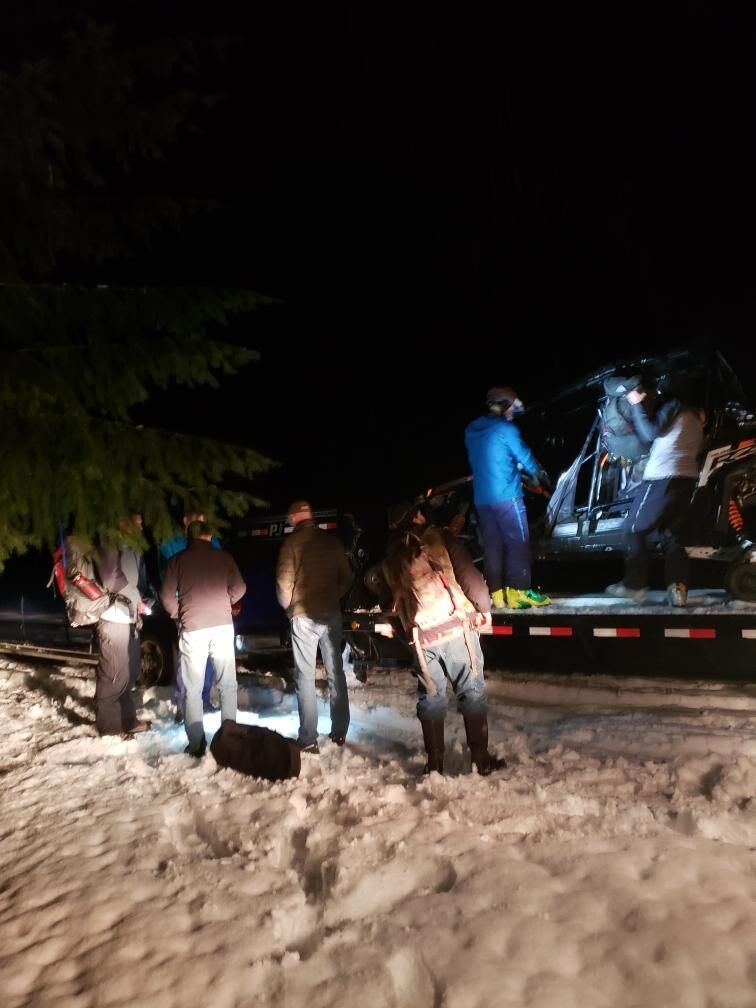 The group of mountaineers prepare to ascend Mt. Adams in search of a Trout Lake local who was caught in a whiteout after making a solo skiing trip on Sat. Jan. 29. 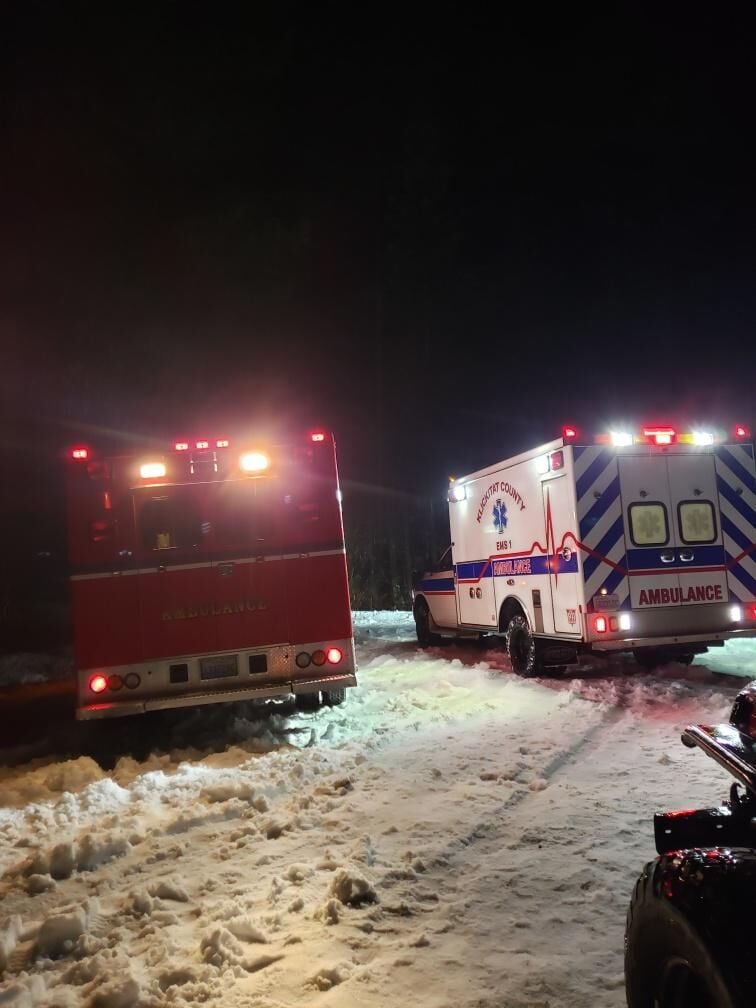 Klickitat EMS await the return of a skier who had gotten caught in a whiteout on Mt. Adams. The skier was checked out by paramedics upon his return, and later by a family physician who had diagnosed the skier with only minor frostbite, according to Jacob Stock, the skier's father. 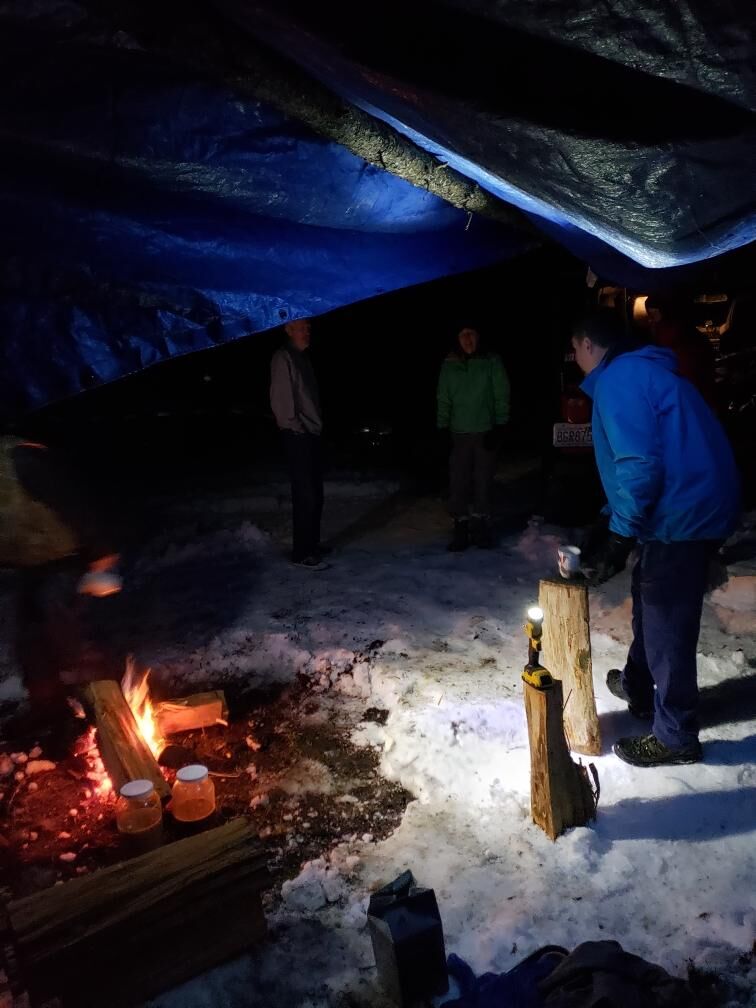 Trout Lake locals set up a base camp while the group of mountaineers assembled and made their way up Mt. Adams to rescue the skier.

A 17-year-old skier from Trout Lake survived after getting stranded in whiteout conditions on Mount Adams last weekend, thanks to emergency communications and navigations systems as well as the expediency of a group of five mountaineers who braved the winter weather to make the climb through the night, find the skier, and bring him home.

All told, the ordeal lasted from Saturday afternoon to around 4 a.m. on Sunday, when the group found the skier and brought him back down the mountain.

Jacob Stock, the skier’s father, said his son had suffered a minor hit of frostbite to his wrist, a fortunate turn of events from what he most deeply feared on Saturday.

“To have my son back, it was very relieving,” Stock said. “I know I could never thank those five guys enough. Their bravery, knowledge, and experience are unmatched.”

The young skier had made his way up the mountain early the morning of Jan. 30 to do some solo skiing, Stock recalled.

“It was nice weather when he was up there. He turned around and from what he describes, the weather started to go in at one time and it felt like he had vertigo,” Stock said. The skier then posted up on the Lunch Counter approach.

Stock and his wife were snowmobiling in the Gifford Pinchot National Forest at the time the first beacon signal went out, around 1:30 in the afternoon. They were out of range to talk to him through their Garmin gadgets, so they packed up their gear and drove back home. During that time, more beacon notifications went out and the SOS alert came through the Garmin InReach device, a satellite communication device that allows users to send a distress signal to an emergency center, as well as send and receive text messages.

At this point, the Stocks had called 911 and the Garmin emergency coordination team, which contacted Skamania County as well as Yakima County’s search and rescue team, who called back around 5 p.m. and told the Stocks they would not be able to make the climb that night due to the weather situation.

About an hour earlier, the Stocks had reached out to a couple locals who offered to take their snowmobiles up the trail and assess the situation, which they did. When they came back, they said they could make another pass in the morning, and asked Stock, “What’s he wearing?”

“I looked at his room and pieced together what I thought he had on him, and it wasn’t much,” he said.

By then, the Stocks were able to communicate with their son through the Garmin emergency coordination team. The young skier had walked down a 10th of a mile because he thought the weather was lightening up and hid behind a snow drift, where he would wait for the rescue team.

Trout Lake is a small and tight-knit community, so the story had made its way around town by nightfall, which is when Lucas King and his brother, Alex, heard of the situation and reached out to offer help. The King brothers, Stock said, are very knowledgeable of the trails around Mount Adams and the terrain. Their enthusiasm for mountaineering earned them four of the five fastest known times to hike around the mountain, per fastestknowntimes.com.

“All of us up on the mountain were very familiar with our surroundings,” said Lucas King.

Alex King drove up from Bend and arrived around midnight. By then, the Stocks had made a base camp, and the Stocks, the Kings, and the two other locals were deciding the next plan of action. One of the Kings, Stock recalled, had told the locals who went up before that “We’ll go if you go up again.”

That is when Stock remembered telling the crew of volunteers, “I’m not going to ask any of you guys to go. My son made the mistake, unfortunately he’s going to have to deal with the consequences.

“Probably one of the hardest things I had to say if I’m being honest,” Stock said, recalling that he couldn’t ask others to risk everything. The team still decided to make the climb that night, because they were not sure they could wait until the morning. They split up into two groups: The first would go up on snowshoes and the other would snowmobile up to 4,500 feet and ski the rest of the way, figuring they would make it to the location at around 9,000 feet around the same time.

“That night it was pretty bad conditions … personal safety of myself and the guy I was with was definitely number one priority,” said Lucas King.

One of the team members called Stock a couple of hours in to tell him they were in the zone and told him to text his son to “stand up and yell.” He said his recalled it took him a few minutes to do so. The team had actually walked right past his son, and when they were a couple hundred feet past his location, the young skier found the strength to shout.

“And the rest is history,” said Stock. The team that found him gave him a drink and clothes and helped him make his way down the mountain. He needed some help to walk and was slurring his words, said Lucas King, who works as a firefighter for Washington Department of Natural Resources.

“My son’s an adventurer, he’s going to go skiing and then he learns some things. I really hoped he learned the lesson to go up with somebody,” said Stock.

The groups of volunteers met each other on the way down the mountain and the boy and his father were reunited early Sunday morning.

“Talking to the kid that got stuck up there, there’s a lot of lessons learned, like how important it is to be prepared,” said Lucas King.

The week after the incident occurred has been helpful to process what went down, and for Stock, it is just the beginning of a project to create a local search and rescue team based in Trout Lake. The need for one is there, said Stock, who had a similar incident occur in November, when they lost their 5-year-old at one of the local sno-parks. The boy was quickly found thanks to locals who were at the area. In both instances, emergency officials were not in a position to help, due to either jurisdiction issues or the lack of an adequate response time because of weather or the geography of the area, Stock recalled.

“We have a ton of people (in Trout Lake) who know Mount Adams and Gifford really well, and in either of our situations, we would have lost one of our sons if we didn’t know our local town,” said Stock.

“The honest fact of the matter here, if something happens to you and you’re somewhere up in the Gifford, you need to be prepared to survive for a couple days.”

He is having ongoing conversations with groups to find support for a search and rescue team in the Trout Lake area. He said its important, especially since Skamania and Yakima counties are close by, that it makes having adequate coordination between all the stakeholders a challenge.

This week the young skier has been taking it easy at home and making time to hang out with his buddies, and “everybody is trying not to take anything for granted,” said Stock. “Now he’s got a few more (friends) because his rescuers want to take him skiing,” he said.

“We’re eternally grateful to those five people who did it. It’s because of them he still walks on the earth,” said Stock, sharing his gratitude for the support the Trout Lake community lent him and his family that night. “It’s a pretty spectacular community. Anybody will drop anything for anybody, and that’s just what happens here.”