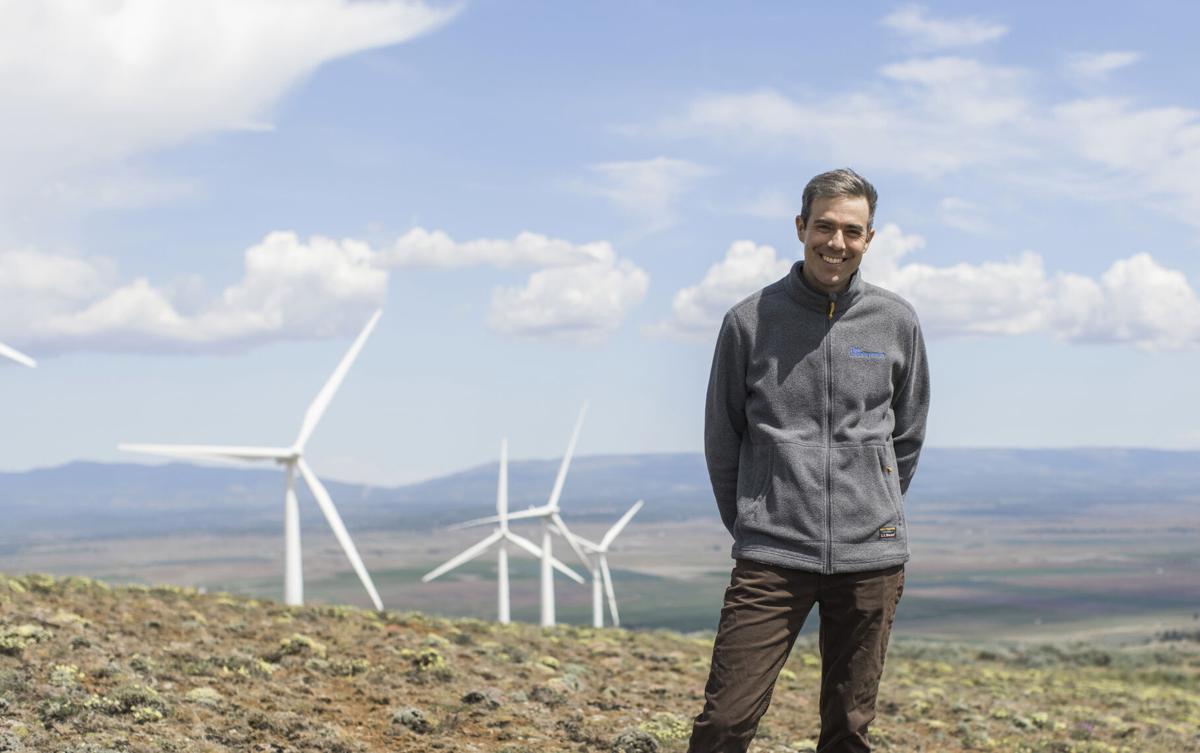 Erik Steimle, vice president of project development for Rye Development, stands on the upper portion of the site planned for the Goldendale Energy Storage Project. He works on design, construction and operations at locations world-wide. 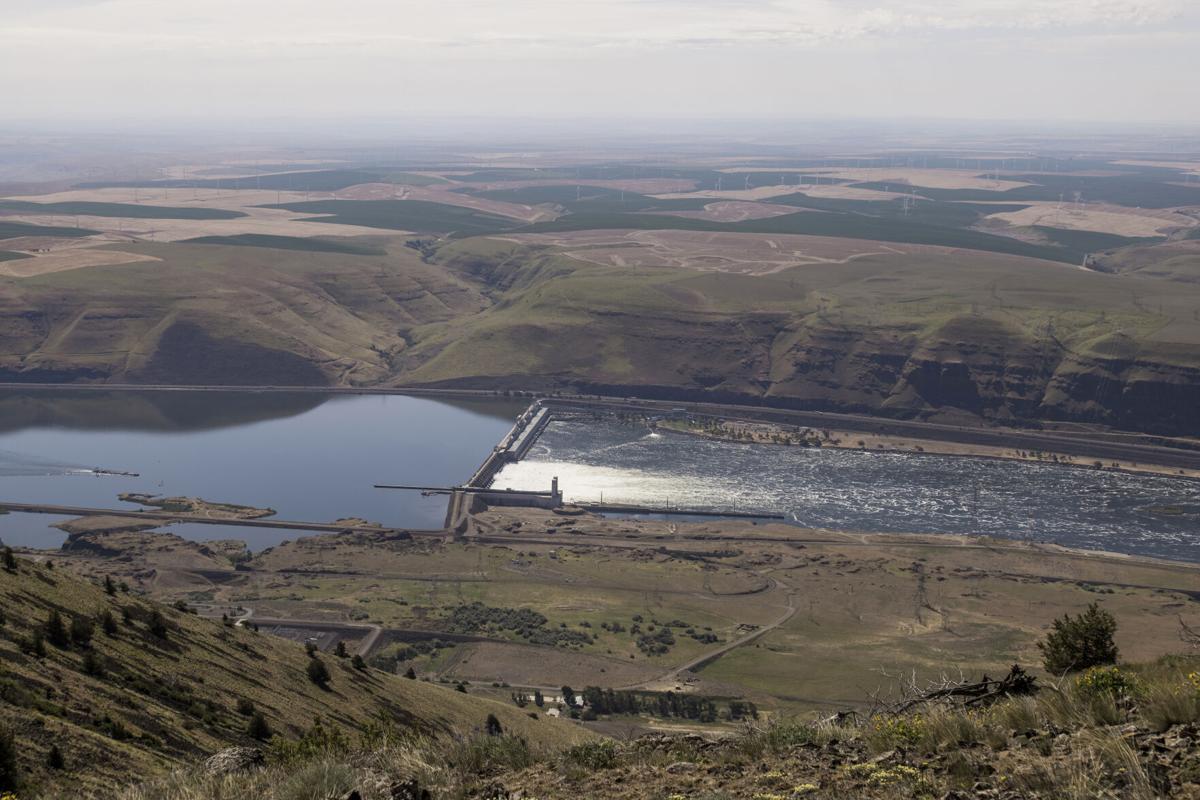 The lower reservoir of the Goldendale Energy Storage Project would be built on a section of the former site of the Golden Northwest Aluminum smelter, pictured from the top of the ridge 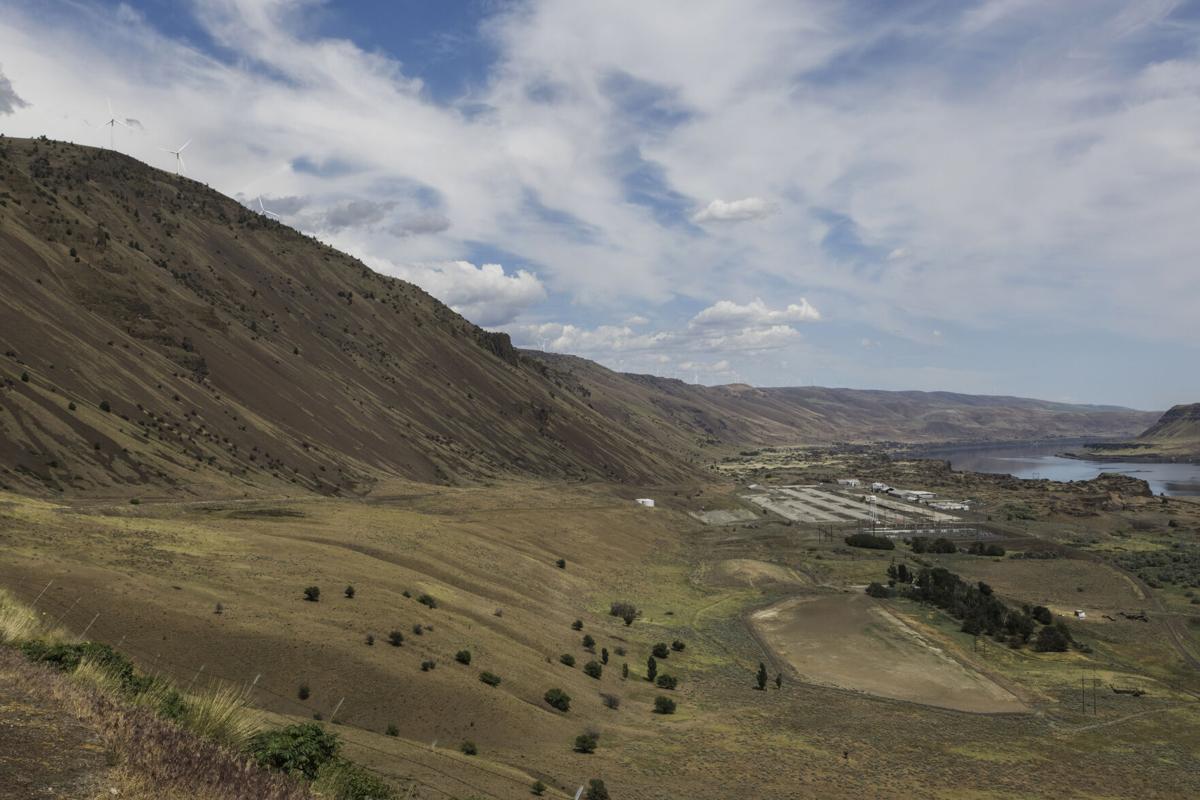 The lower reservoir of the Goldendale Energy Storage Project would be built on a section of the former site of the Golden Northwest Aluminum smelter. 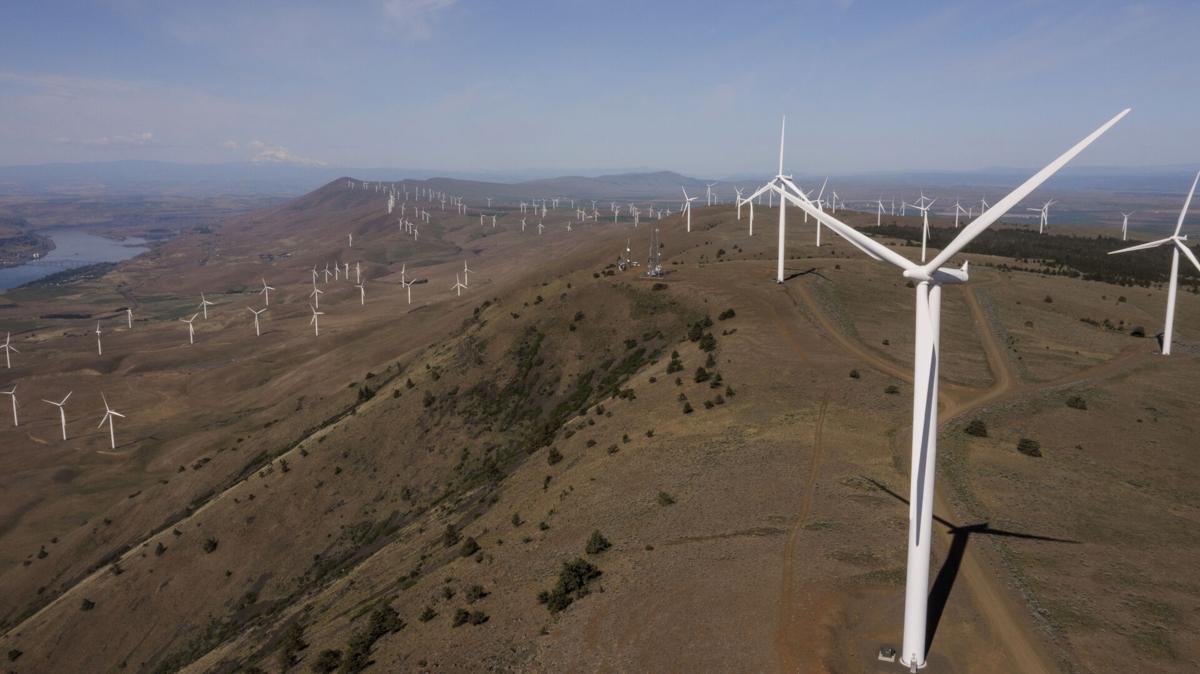 Windmills line the ridge at the site of the Goldendale Energy Storage Project. 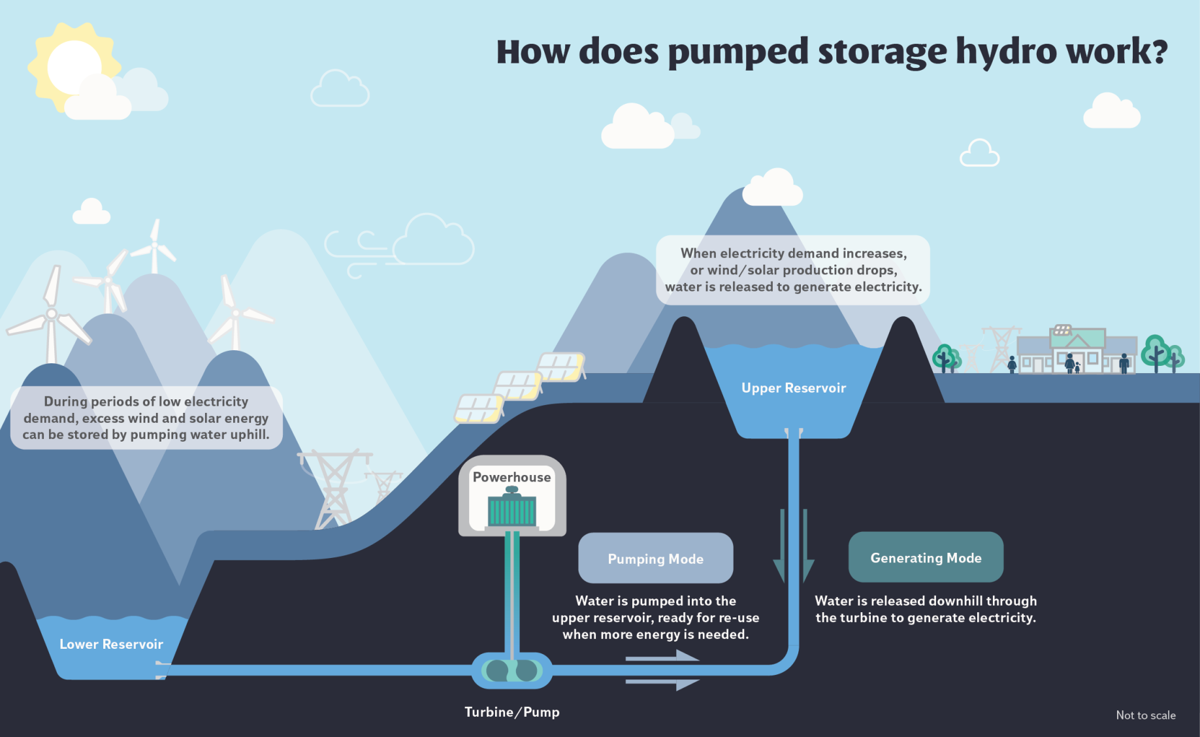 The project is conceptualized in this graphic: A 20-inch diameter pipe installed underground will connect an upper reservoir with a lower reservoir 2,000 below. The system acts like a giant water battery using water and gravity to produce renewable energy on demand.

Erik Steimle, vice president of project development for Rye Development, stands on the upper portion of the site planned for the Goldendale Energy Storage Project. He works on design, construction and operations at locations world-wide.

The lower reservoir of the Goldendale Energy Storage Project would be built on a section of the former site of the Golden Northwest Aluminum smelter, pictured from the top of the ridge

The lower reservoir of the Goldendale Energy Storage Project would be built on a section of the former site of the Golden Northwest Aluminum smelter.

Windmills line the ridge at the site of the Goldendale Energy Storage Project.

The project is conceptualized in this graphic: A 20-inch diameter pipe installed underground will connect an upper reservoir with a lower reservoir 2,000 below. The system acts like a giant water battery using water and gravity to produce renewable energy on demand.

“It’s an old sort of ‘back to the future’ project,” said Michael Rooney, vice president of Project Management for Rye Development, LLC. “We think closed-loop pumped hydro storage is critical to the grid, specifically in the Pacific Northwest.”

The project is owned by Copenhagen Infrastructure Partners, an energy infrastructure company based in Denmark. “They have a long track record of investing in projects that are renewable in nature and have a good, positive impact for local communities from an economic development standpoint,” Rooney said during a presentation before the Wasco County Board of Commissioners this spring.

He has also presented an overview of the project to The Dalles City Council, community groups and the Mid-Columbia Economic Development Commission, among others.

The project developer is Rye Development, LLC. “We are the largest developer of new hydro resources and hydro storage in the country,” Rooney said. They are a team of 10, with a portfolio of low impact “run of river” hydro projects, mostly in the mid-Atlantic and southeastern United States, he said.

The Goldendale project is a closed-loop pumped hydro storage project. “It is completely off river in what we call a closed loop,” Rooney said. It is located on private land 8 miles southeast of the town of Goldendale, within Klickitat County’s “Clean Energy Overlay Zone,” established in 2005 to expedite clean energy development.

“When completed, the scale of the project is significant,” Rooney noted. It will generate about 1,200 megawatts of clean electricity, and have, roughly, a 12 to 20 hour storage capacity. “You can think of this project as a big water battery.”

The project consists of two 60 acre ponds, with significant elevation between them and a tunnel fitted with turbines between them.

“It’s a sizeable project,” he said, but has a smaller footprint then would be needed for traditional battery storage. To generate the same 1,200 with wind turbines would require roughly 7,300 acres of land; solar would require roughly 54,000 acres. The Goldendale project would be situated on 600 acres. “It’s a much smaller footprint then other technologies,” Rooney said. The site is well suited for this type of project, he added. “You need the acres, the water, and proximity to transmission [the electrical grid]. All those requirements are met on the property.”

Pumped storage hydro technology is a mature technology, and has been around for a long time, he added. In the U.S. a lot of them were in tandem with nuclear facilities, to balance generation coming out of those facilities.

“Battery storage is getting a lot of attention right now, but when you start thinking about real, grid-scale clean storage, pumped storage accounts for 95% of utility-scale storage in the U.S. right now. It is the oldest and largest technology in the states,” Rooney said. “Our projects are closed-loop systems. We are essentially moving water from one reservoir to the other, depending on system requirements. When there is a need for power on the grid, you can release water through the turbines and generate power. When there is excess power on the grid, you can use that power to pump water back up to the second reservoir and store it.”

In the Goldendale project, the power used to pump the water back up to the higher elevation reservoir will be generated by wind and solar, making the facility carbon and pollution free, with ‘on demand’ power.”

“Compared to other clean energy sources, like wind and solar that are naturally intermittent, our project is a really good replacement option for hard capacity coming off of the grid, which has historically been provided by natural gas and coal fire power plants,” Rooney said. “This project creates an on-demand source of power for when the wind isn’t blowing and the sun isn’t shining.”

It is a $2 billion plus project, and will create more than 3,000 family-wage jobs during its four year construction, and will create another 60 permanent full time jobs. “We anticipate the project will generate about $14 million in local tax revenue annually through construction and operation,” he added.

“The lower reservoir is at the former aluminum smelter site, and we anticipate doing an estimated $10 million in environmental mitigation on that site alone,” Rooney said.

The project would revitalize a former “brownfield” site (the Goldendale Aluminum Plant) into a clean energy resource; help reduce emissions and dependence on fossil fuels; avoid construction of a new dam; and lower investment in transmission infrastructure compared to other clean energy options.

Nevertheless, the project is not without opposition. In June, the Washington Department of Ecology (Ecology) denied a key permit application, citing incomplete information on major project impacts, including wetlands and streams, groundwater and pollution from contaminated sites.

Comments by the Confederated Tribes and Bands of the Yakama Nation objecting to the application said calling the project a “fixed looped” system was disingenuous and misleading, with an estimated 2.93 million gallons of water “to be drawn from the Columbia River to fill the project’s reservoirs, followed by continuous replenishment to compensate for evaporation and leakage.” The comments also cites loss or damage of existing steams and wetlands in the project area, as well as culturally significant resources.

“Such a massive development, lacking sufficient information, and proposing to detrimentally destroy Tribal cultural resources, cannot be fast tracked through the permitting process under a green veneer,” said Simone Anter, staff attorney at Columbia Riverkeeper, in a press release.

Erik Steimle, Rye vice president of project development, said, “The procedural decision from the Washington State Department of Ecology was expected and doesn’t interfere with the development timeline of the Goldendale Energy Storage Project, a cornerstone of both Washington’s and the broader Pacific Northwest’s clean energy economy.”

Rooney acknowledged that obtaining a 401 Water Quality Certificate is a necessary and important step and Rye and its partners are committed to continuing to work with the Washington Department of Ecology to ensure it has all the information necessary to issue this permit before construction begins.

A preliminary permit for the project was issued in 2018, and a federal license application was submitted to FERC in the summer of 2020. FERC Environmental Assessment or Environmental Impact Statement process is anticipated to run from 2021 through 2022, and final design work from 2022 through 2024. Construction would begin in 2025 with completion in 2027, and commercial operation would begin in 2028.

Commissioner Scott Hege noted the project had been around for “a long while,” with a bunch of different companies trying to complete the project.

“I’m really excited about this, I think it’s a great use of our resources,” said Commissioner Steve Kramer. “I’m a little concerned as to where we are going to find the 3,000 people to work on this thing.”

“That’s why we reached out to trade groups,” resonded Rooney. “It’s a long enough project, they can take a person from apprenticeship to journeyman on just one site, so that offers a pretty unique opportunity.”

Also, Copenhagen purchased the project recently, and are a large, international player in the clean energy space. “They are able to invest the resources needed, and they see the value of the Goldendale project. So I’m very hopeful that this project will indeed move forward this time.”

Project managers are currently in talks with power purchasers, working to set up buyers for the power generated by the project, Rooney said.

What’s in the Sky December 2021: Much to see on clear December nights