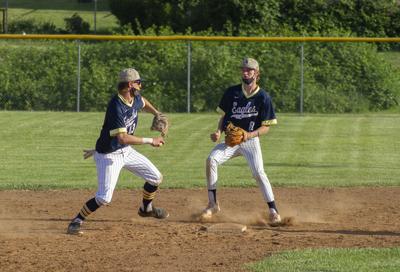 Led by junior pitcher Mason Spellecy, who sparkled on the mound with a no-hitter, HRV won 16-0 over The Dalles (3-7 IMC, 3-13 overall) May 11 at Quinton Street Ballpark in The Dalles. The Eagles followed that three days later at home with a doubleheader sweep, winning the first game 9-1 and then taking the nightcap 11-1 on Senior Night.

Six Eagle seniors, playing in the final regular season home game of their HRV baseball career, were honored in a ceremony along with their parents after the first game. The seniors include Nate Van Dooren, Nolan Ryan, Andy Foster, Sebastian Zeman, Emilio Castaneda, and Harrison Howell.

A highly confident Eagle squad, guided by Coach Erich Harjo, will now begin its quest to win its first IMC title since 2017. The No. 2 seeded Eagles play a 4:30 p.m. IMC District playoff semifinal Wednesday at Hood River Valley High’s Traner Field against a yet-to-be-determined opponent. A semifinal win would propel HRV into the May 22 IMC championship game likely against the top-seeded Pendleton Buckaroos (10-0 IMC, 12-3) at Pendleton High School.

“I think it always starts on the mound and Nate Van Dooren pitched exceptionally well in the first game,” said Harjo. “Jake Von Lubken pitched extremely well in the second game and that’s what he’s been doing all year for us. Mason had an outstanding performance last Tuesday with the no-hitter. Our pitchers are in a really good spot right now and I think that sets us up well to play better defensive.”

The Eagle seniors were in the spotlight Friday, with the ceremony to honor their high school careers, and they appropriately shined brightly on the field, as well. Outstanding performances by Van Dooren, Foster and Howell helped lead HRV to victories.

In Game 1, the Eagles got their offensive attack untracked in the first inning, led by Van Dooren, whose sacrifice RBI groundout drove in junior Joe Reitz, who earlier reached base after being hit by a pitch. Howell also had an RBI in the first to help the Eagles build a 3-0 lead. HRV scored three in the third, highlighted by Howell’s RBI double and a sacrifice fly RBI by Foster.

Starting pitcher Van Dooren tossed a three-hitter and struck out 12 in six innings. Reliever Howell pitched the seventh to help close out the game for HRV.

In last Tuesday’s game in The Dalles, Spellecy (11 strikeouts) stole the show from the young (10 freshmen, no seniors) Riverhawks, who were playing their final regular season home game.

“My teammates definitely made a lot of great plays defensively to help me,” said Spellecy, who moved to Hood River in 2014 from Oklahoma. “It was my first ever no-hitter of my career, which started way back when I was in Little League. I’ve been playing since I was a little kid living in Oklahoma. At the beginning of the game, I felt really good when I was warming up in the bullpen. I was throwing pretty hard, and everything felt good. Our catcher Joe Reitz was calling a great game and we started going out playing aggressively and everything just continued going well for us. I was very excited at the end of the game.”

It marked the first no-hitter by an HRV pitcher since 2019, when Ryan Gray no-hit Crook County.

“We have a good group of guys, we’ve all been playing together for a long time and we’re all good friends,” said Spellecy. “It’s been a good season and we’re having lots of fun. We’re playing really good baseball right now. We’re coming together as a team and we’re hitting the ball better. We definitely feel like we have a good chance to win the league championship and that’s our goal. We know what to expect from Pendleton and we’ll be ready to play them on Saturday.”

HRV added a run in the second, four in the third and one in the fifth to build a 9-0 advantage. The Eagles’ fifth ranked offense (8.26 runs per game average) was on display in the sixth with a seven-run explosion, propelling HRV in front 16-0. The contest concluded after six innings via the 10-run Mercy Rule. The Eagles capitalized on six Riverhawk errors, while they played error free defense and also had eight stolen bases.

The Eagles have won 10 straight games vs. Class 5A opponents and they’re the only 5A squad that has beat Pendleton (an 11-3 win, April 16 at Hood River).

“Our team is in a really good spot,” said Harjo. “We’re practicing consistently well and we’re not out here trying to learn any new stuff. We’re just trying to maintain a high level of play. Like I said before, it all starts on the mound. Our pitchers are throwing very well and they’re helping us win some games.”