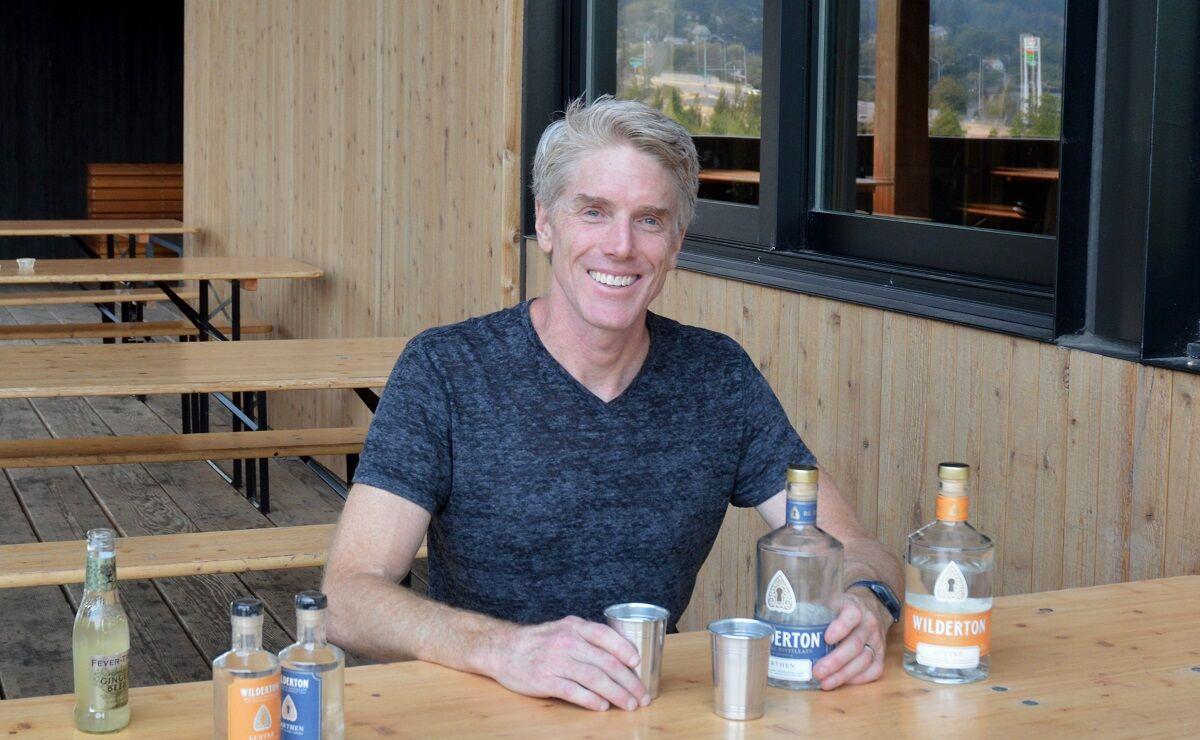 Brad Whiting is one of the owners of Wilderton Botanical Distillate, a local company that produces non-alcoholic spirits.

A sample of Wilderton’s non-alcoholic “Earthen,” from Botanical Distillate.

When Brad Whiting moved back to Hood River, fresh off of getting a business degree at Portland State, he wasn’t sure what he wanted to do. He spent time knocking around, trying to figure out where he would best fit, and then he stumbled upon Hood River Distillers.

Whiting and HRD were a good fit from the beginning, he said. When he joined, they were the largest producer of spirits in the Pacific Northwest, with Pendleton Whisky just beginning to take off. He ended up overseeing procurement and distilling.

With HRD, Whiting was able to learn a lot about spirits, as well as to go on several adventures.

However, after HRD sold Pendleton Whisky, Whiting said it marked the time for him to go do his own thing, leaving in 2018. Now, after 14 years, he found himself in the same position where he had been before: Not knowing what he wanted to do, or where he wanted to go from there.

“I guess I had sort of a stereotypical kind of midlife crisis of ‘I love the culture of drinking spirits and making spirits,’” Whiting said. “But I was a mid-40s-year-old guy with a young kid ... I just knew personally for me, it wasn’t the right decision to say start a whiskey brand or start a, you know, a vodka brand, but wanted to stay kind of close enough to that occasion of having cocktails.”

Whiting thought about it and, with the help of his friend Seth O’Malley, came to a solution. Together, he and O’Malley started Wilderton Botanical Distillate, a spirit brand that’s completely non-alcoholic.

“I think because I came from the spirits world, I have too much respect for those categories to try to just say you can take the alcohol out of it and have it be the same experience,” he said.

Instead, Whiting said he and O’Malley wanted to focus on creating something entirely different that would function like a spirit without trying to be an already existing one.

Because O’Malley has a background in tea, kombucha and perfume, as well as traditional distilled spirits, the pair decided to focus on botanicals, Whiting said.

Instead of starting with an alcoholic drink and trying to find a way to remove the alcohol, O’Malley and Whiting wanted to start with water and infuse botanicals in new and interesting ways. Instead of just infusing orange to make an orange flavor, they wanted to layer many botanicals to create something unique. Wilderton currently has two different versions, Lustre and Earthen, which they refer to as expressions rather than flavors.

“We’ve struggled to call them flavors because they don’t taste like one ingredient,” he said.

Whiting said Lustre is meant to encompass a summery sort of feeling, whereas Earthen is supposed to fit the opposite.

“We really started off trying to think of sort of what was a bright, energetic kind of summer hot day feeling thing,” he said. “And then on the other hand, sort of like a deep smoky spicy thing that might be feeling more like fall or winter.”

Whiting believes the spirits could be great for people at parties who don’t drink and are tired of going to the bar and ordering soda, he said.

“There might be a portion of the party that’s going that wants to drink and a portion that doesn’t want to drink and the portion that doesn’t want to drink, sort of feel left out, sort of like, ‘Why do I matter less than somebody who’s getting this really beautiful crafted drink?’” Whiting said. “And part of what we’re trying to bring is this story of everybody’s welcome at the party, everybody should, you know, have the opportunity to have really crafted interesting drinks.”

The spirits don’t have to just be for people who don’t drink, Whiting said. He himself still drinks occasionally, but finds that Wilderton can be a good substitute when one wants to cut back or is just interested in something a little different.

He also thinks the spirits, while good on their own, have great cocktail potential, he said. He believes it could change the way people approach and enjoy cocktails.

“It’s kind of cool that all of a sudden, a cocktail doesn’t need to be just at night,” he said. “Maybe people used to go to brunch and have, you know, a mimosa or something, but who really wants alcohol in the morning? But you do want something that’s delicious and interesting.”

Non-alcoholic cocktails have gained popularity in the last several years, often being called “mocktails,” though Whiting said he felt like the name could be misleading, because they’re not mocking cocktails, they’re just finding a new approach to them.

“There’s been this assumption that alcohol is part of a cocktail,” he said. “We’re kind of trying to break that down. It’s just like a cocktail. It’s just about beautifully crafted ingredients put together in an artful way.”

Wilderton Botanical Distillate can be found on their website at wildertonfree.com.